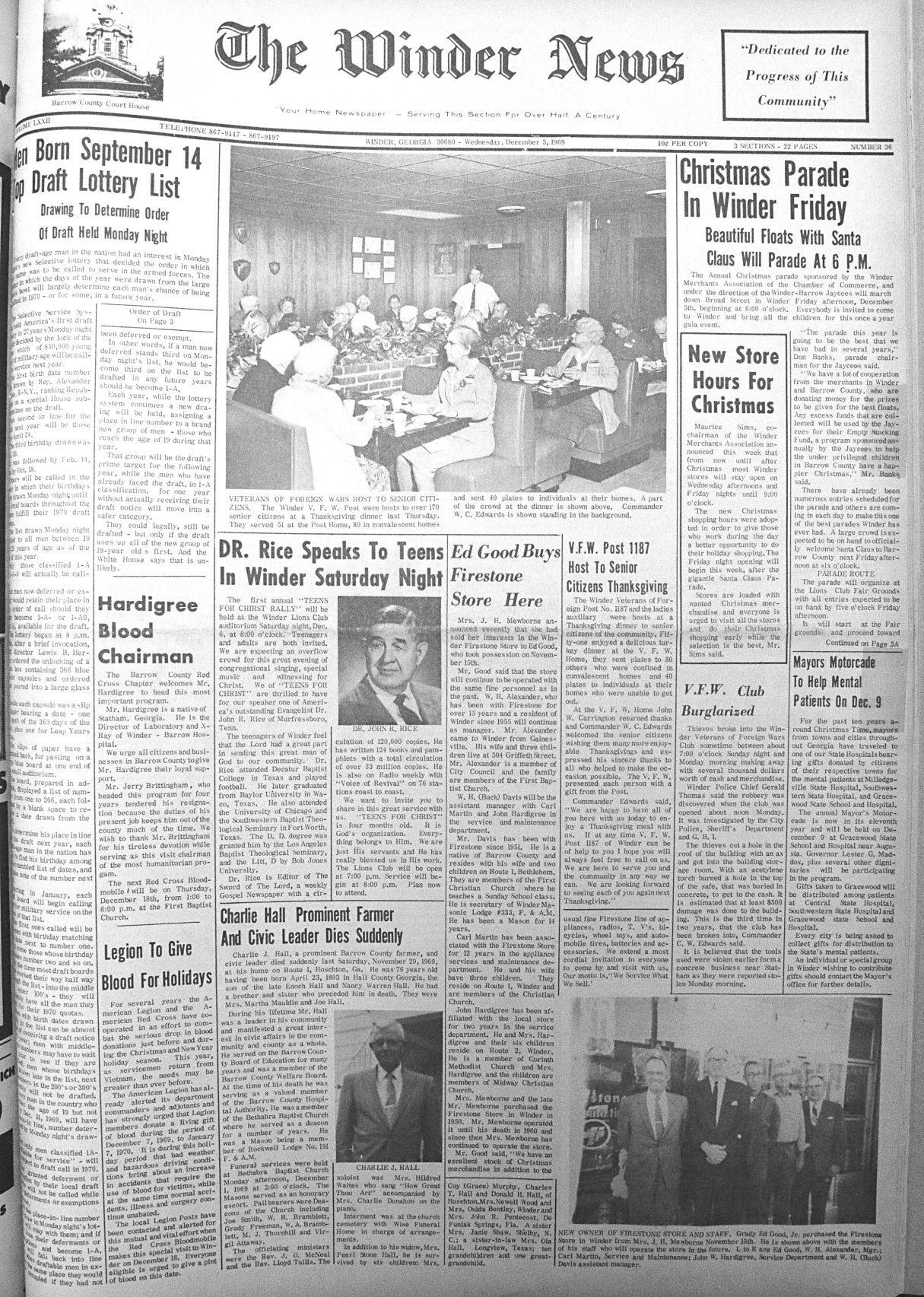 Continuing with this edition, past newspaper front pages will highlight local news and history in Winder and Barrow County. This front page is from the Dec. 3, 1969 edition of The Winder News.

Barrow County students will start school in early August for the next two years and have the breaks to which they have become accustomed. In addition, traffic around schools should slow down a bit or end up with speeding tickets.

The Barrow County Board of Education approved school calendars for two years — 2020-21 and 2021-22 — and agreed to have the sheriff’s office install a new “photo speed enforcement” system at most schools.

Students will start school Aug. 4 next summer and Aug. 3 in 2021. Graduation will be May 27-28 in 2021 and May 26-27 in 2022. The calendars provide a week break in October and November and more than two weeks in December-January. Long weekends are set in February and March and the spring break is the first week of April.

The speeding program will start with a traffic study at each school, Sheriff Jud Smith told the board.

For the first 30 days, speeders will get a warning. After 30 days, tickets will cost a person $100 for going 11 miles over the speed limit. The sheriff’s department will review each ticket. No points will be applied to driver’s licenses, but failure to pay will result in a license suspension.

The sheriff’s department expects to have the system working by late February or early March. Funds from the tickets will be used for school safety programs.

The board approved technology purchases of $846,000 for computers and interactive panels.

Most of the money will come from SPLOST.

The purchases include 165 of the panels. Of those, 125 will replace end of life projectors. The others are for the new high school.

The other purchases are for 600 Chromebooks and 275 Dell laptops. All of the computers are replacing others that the schools have had.

The board also approved Charles Black Construction as the construction manager for the Statham renovation and for the Westside Middle School addition, which includes 24 new classrooms. Projects also will include audio/visual additions. The total cost is expected to be about $13.5 million.

In other business, the BOE:

•heard a report that the district's ELOST payment for November was above $1 million for the eighth straight month. The school district had collected $11.4 million through November, more than it collected in 12 months in 2018 when it received $11.2 million.

•recognized the Apalachee and Winder-Barrow high school bands for their competitive accomplishments this year. Both bands were awarded top honors in the Georgia Contest of Champions and the Lake Hartwell Marching Competition. Winder-Barrow competed in the “open” class — the largest bands — for the first time.

•honored Molly Davis, a sixth-grader at Russell Middle School, and Abigail Judd, a fifth-grader at Statham Elementary School, for their illustration and message, respectively, for the system’s holiday card. The district had 50 entries in the contest, Ellen Petree, school and community relations, said.