The Hoschton City Council can continue to operate with a three-member board following recent court action.

On Dec. 20, Superior Court Judge Joe Booth ordered the temporary suspension of a sentence in the town's charter that prevents the acting mayor from voting. That move allows mayor pro tem Adam Ledbetter and council members Shantwon Astin and Hope Weeks to continue functioning as a three-member board.

Cleveland’s and Kenerly’s resignations left the city council essentially inoperable under the town's charter. Three affirmative votes are required for the council to approve anything. But the town's charter doesn't allow the mayor, or in the absence of the mayor, the mayor pro tem, to vote on city matters.

With just three council members left and no mayor, there wouldn't have been enough voting members to transact city business.

The order in the Superior Court of Jackson County allows the newly-elected mayor pro tem, Ledbetter, to vote on city matters. That move allows the council to continue functioning until the March 24 election to fill the vacated seats.

The three-member board wasted no time, holding its first official meeting outside of the courtroom.

Ledbetter, who is technically acting mayor, immediately turned the meeting over to Weeks, the senior member on the council.

During the brief meeting, the council:

•approved a change to its financial policies to deal with emergencies.

•approved allowing Georgia Climate Control to move forward with repairs to the city hall furnace and gas lines not to exceed $7,000 following a gas leak at city hall. Work could begin on Monday, Dec. 23.

•tabled action on the purchase of a Flow Meter.

Hoschton Mayor Theresa Kenerly resigned her office Dec. 15 following a national controversy and months of calls for her resignation.

But Kenerly was adamant in a recent interview with The Braselton News that she did nothing wrong in the hiring process of a new city administrator for the town.

Kenerly is accused of not including the resume of Keith Henry, a candidate for city administrator, because of his race. A fellow council member said Kenerly presented the council with three resumes, adding there was a fourth candidate, Henry, who was “real good.” Kenerly reportedly told the council member that Henry is black and she didn’t know if the city was “ready for that.”

In a following news story about the issue with an Atlanta newspaper, mayor pro tem Jim Cleveland defended Kenerly and also expressed his views against interracial relationships, stating they make his “blood boil.”

The backlash was swift, with citizens calling for Cleveland’s and Kenerly’s resignations and filing numerous ethics complaints. And when the two didn’t resign, a formal recall effort was started in August.

After months of signature gathering and court hearings, the final recall vote was scheduled for Jan. 14. But in December, Cleveland and Kenerly both resigned before a recall could happen.

The resignations left the city council essentially inoperable, forcing the town to seek a court decision to allow a three-member city council to vote until the vacated seats are filled March 24.

In an interview after her resignation, Kenerly remained insistent that she did nothing wrong in the city administrator search.

Kenerly said the city received over 90 applicants for the position. She narrowed the list down to 10 and focused on candidates that offered significant experience.

She and Justin Kilgore, the town’s planning and zoning director, narrowed the list down to three top candidates.

As a result, Kenerly said she asked Kilgore which of the remaining candidates they should add to make the fourth resume and Kilgore recommended Henry. He subsequently emailed Henry’s resume to all council members.

Kenerly said her comments to a fellow council member about Henry's application were “misconstrued” and stressed she didn’t withhold Henry’s application from the other members of the city council.

“I’ll swear on a stack of Bibles and in front of the good Lord that I never held back an application,” she said. “Why would I do that?”

She added Cleveland’s comments about his racial views in the news article complicated the situation. She said she might have been able to rebut the controversy if he hadn’t shared his views against interracial relationships, comments which fueled a national controversy.

“I think it would have been easier,” she said about the situation following Cleveland's comments.

Regardless, Kenerly was essentially forced to resign by the ensuing political storm, or face the likelihood of a  Jan. 14 recall.

Kenerly fought the recall move from the start, taking it to the Superior Court of Jackson County. But senior judge David Sweat ruled the recall could move forward. Kenerly said she wasn’t surprised by the ruling.

“(Sweat) had his mind made up when I walked in the door,” she said.

Kenerly appealed that decision with the Supreme Court of Georgia. That appeal was ultimately denied.

REFLECTS ON ACCOMPLISHMENTS IN TOWN

Kenerly served on the Hoschton City Council for 12 years and was mayor for seven of those years, replacing former mayor Erma Denney.

She said she had been reflecting in recent days on the town’s accomplishments, both big and small, from adding safe tempered glass to city hall, to securing a grant for Panther Ct. sewer improvements. The city has also grown its reserves in recent years and secured zoning changes for the massive Kolter project, which has the potential to drastically change the city in the coming years.

Kenerly said she has loved the city, “babied it, prayed for it and given lots of time.” After many years serving as the mayor in a strong-mayor type of government, Kenerly has developed a habit of saying “I” and “we” when referring to the city.

Kenerly admits it was probably time for her to leave as mayor.

“I would run again in March, but my family would kill me. … And really to be honest with you, it was probably past time for me to go,” adding she needs to spend more time caring for her mother.

Kenerly added the recent citizens’ comments during public meetings have been difficult.

“That citizen input got me,” said Kenerly. “I’ve never been talked to like that. And accused and beat up on.”

Kenerly said the council was “mean" to Hall, and she determined he wasn’t a good fit for the city. She said she offered him the chance to resign, or he would be terminated. He gave a 30-day notice.

“When they found out about it, they said ‘I don’t even want him in the city. I want the staff to box up his stuff and set it outside,’” Kenerly said.

Hall was ultimately fired with cause, which keeps the council from having to provide severance pay. Council members and Mitchell refused to provide what that cause is.

Kenerly denied that Hall did anything wrong.

“The man didn’t do the first thing wrong. They just didn’t like him,” she said.

The firing follows a move by three of the town's council members that appeared to be an attempt to force out Hall.

Hall, who became the town's administrator in the summer of 2019, had rankled some council members by not providing information to the council quickly enough.

At a Dec. 9 meeting, council members Shantwon Astin and Adam Ledbetter refused to support the adoption of the town's budget and a new garbage service firm because they said they only got the documents at the last moment before that meeting.

At a called meeting Dec. 11, Astin, Ledbetter and council member Hope Weeks voted to adopt an ordinance that outlines in detail when the city administrator is to provide the council with paperwork and how quickly he is to respond to council questions.

"Failure to comply with this policy shall be just cause for termination," the new ordinance said.

Kenerly said that policy may have dissuaded Kilgore from serving in the interim role until another city administrator is hired.

Kenerly anticipates Denney will again seek the mayor position in the City of Hoschton.

She also expects the city will need to levy a millage rate.

“Because municipalities just can’t do without it,” she said.

She said the new council members "will do just fine," but urged them to do what they think is best for the town.

"I hope that the city council themselves would use their knowledge, their hearts and their passion to make decisions and not let people talk in their ear and do what somebody else wants them to do,” she said.

She said she hopes the new council will be careful with the city's money and offered some words of advice to officials:

Braselton leaders recently approved a controversial and legally contentious rezoning for property across from Chateau Elan on Hwy. 211.

At a special called meeting Dec. 18, the Braselton Town Council unanimously approved the request from HECE, LLC, for a massive housing and commercial development on 230 acres around the Publix shopping center.

The project was turned down by the council in August. A subsequent lawsuit against the town remanded the case back to the council for another hearing.

The council held that hearing Dec. 9 during its regular council meeting. During that meeting, an attorney for the developer argued that the council should now go ahead and approve the rezoning with conditions that had been worked out between HECE and the city.

One citizen who lives at Chateau Elan said that the project should have gone back before the town's planning commission for more public input before the council took any final action.

An attorney for the developers of the Publix shopping center also opposed plans by the Georgia Department of Transportation for a traffic signal design at the site.

The request was approved with 25 conditions, which covered a number of details including buffers, lot width, housing design and size requirements and traffic improvements. 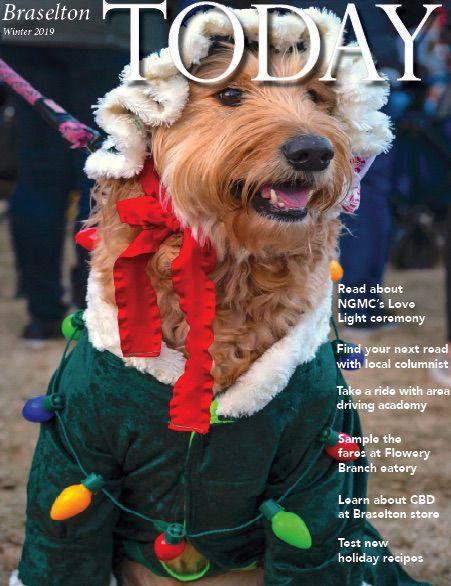 The winter issue of Braselton TODAY, a magazine published by Mainstreet Newspapers, is now available across the greater Braselton area.