Barrow County and the City of Winder have yet to resolve two outstanding service-delivery issues, and a court-ordered mediation session earlier this month did not yield any agreements, leaving both parties uncertain about when the issue will be put to rest and when an updated service-delivery strategy agreement will be put in place.

Elected representatives and other officials representing the county and each municipality in the county met in a private session for more than six hours Nov. 5 at the Georgia Club in Statham to discuss the issues of water utility service and county road maintenance but did not come away with an agreement.

It was the fourth mediation session over the past year between the sides and was led by retired Georgia Supreme Court Chief Justice Norman Fletcher. Fletcher was appointed as the mediator in September by retired Chief Judge David Sweat of the Western Judicial Circuit in Athens-Clarke and Oconee counties, who was assigned to the case in Barrow County Superior Court.

The parties “mediated in good faith, exchanging a number of proposals on each of these issues,” Fletcher wrote in his report to the court. The parties were required to sign non-disclosure agreements prior to the session.

The case now heads back to Sweat, though it’s not clear whether he will order the parties to talk again or make a ruling on the issues, or when the case will go back in front of him. County attorney Angie Davis said she does not expect another mediation session and the county has previously asked the court to make a determination on the remaining issues.

The county and Winder have long been at odds over water service rates and territories. The state’s Service-Delivery Strategy (SDS) Act requires counties and municipalities to agree on which entities can provide services and where. Winder currently has a service monopoly across much of the unincorporated portion of the county and Bethlehem under previous SDS agreements, and the county contends the city has been arbitrarily and unfairly overcharging customers in the unincorporated areas, in violation of the SDS act.

In a petition to the court in July, the county contended that the city overcharged customers outside the city limits by roughly $13.1 million between 2012 and 2017 beyond the cost to provide the service.

The city does not levy a property tax other than its fire tax and transfers excess water system revenues annually to fund the remainder of its fire services and other services for city residents. County officials have said doing so is unfair to the residents in the unincorporated areas who have no political voice inside the city.

“Essentially, a percentage of every one of Winder’s water bills is a disguised city tax and the unincorporated area customers do not receive any additional benefit from the inflated costs,” Davis said. “This is not fair to the unincorporated residents who pay inflated water bills to the City of Winder, and the county has been fighting to right this wrong.”

Davis said the county is also concerned that Winder’s rates are discouraging “much-needed industrial and commercial development” along the Highway 316 corridor and is seeking to service customers along that corridor at lower rates. The city is seeking to block those efforts, she said.

City attorney John Stell rebuffed the county’s claims, saying that the city’s water rate studies in recent years have shown its water rates are “fair and reasonable” and that the county has “no study to show otherwise.”

“The county has failed to identify a single industrial or commercial developer who has refused to locate within the 316 corridor, based on Winder’s water rates,” Stell said.

Stell said that during mediation the city made “several proposals to create funding equity,” including a local transportation special-purpose local-option sales tax (TSPLOST), but that the county rejected those.

The parties have been without an SDS agreement since February but have agreed to the other 39 service areas.

State law requires counties and their municipalities to update their agreements every 10 years or face sanctions from the Georgia Department of Community Affairs that make them ineligible for any state-administered grants, loans, permits or financial assistance.

Those sanctions were placed on Barrow and its municipalities, but Sweat issued a stay while the parties underwent the court-ordered mediation.

Davis said the sanctions remain at the court’s discretion but she doesn’t expect them to be re-imposed — “at least not before any hearing on the legal issues.” 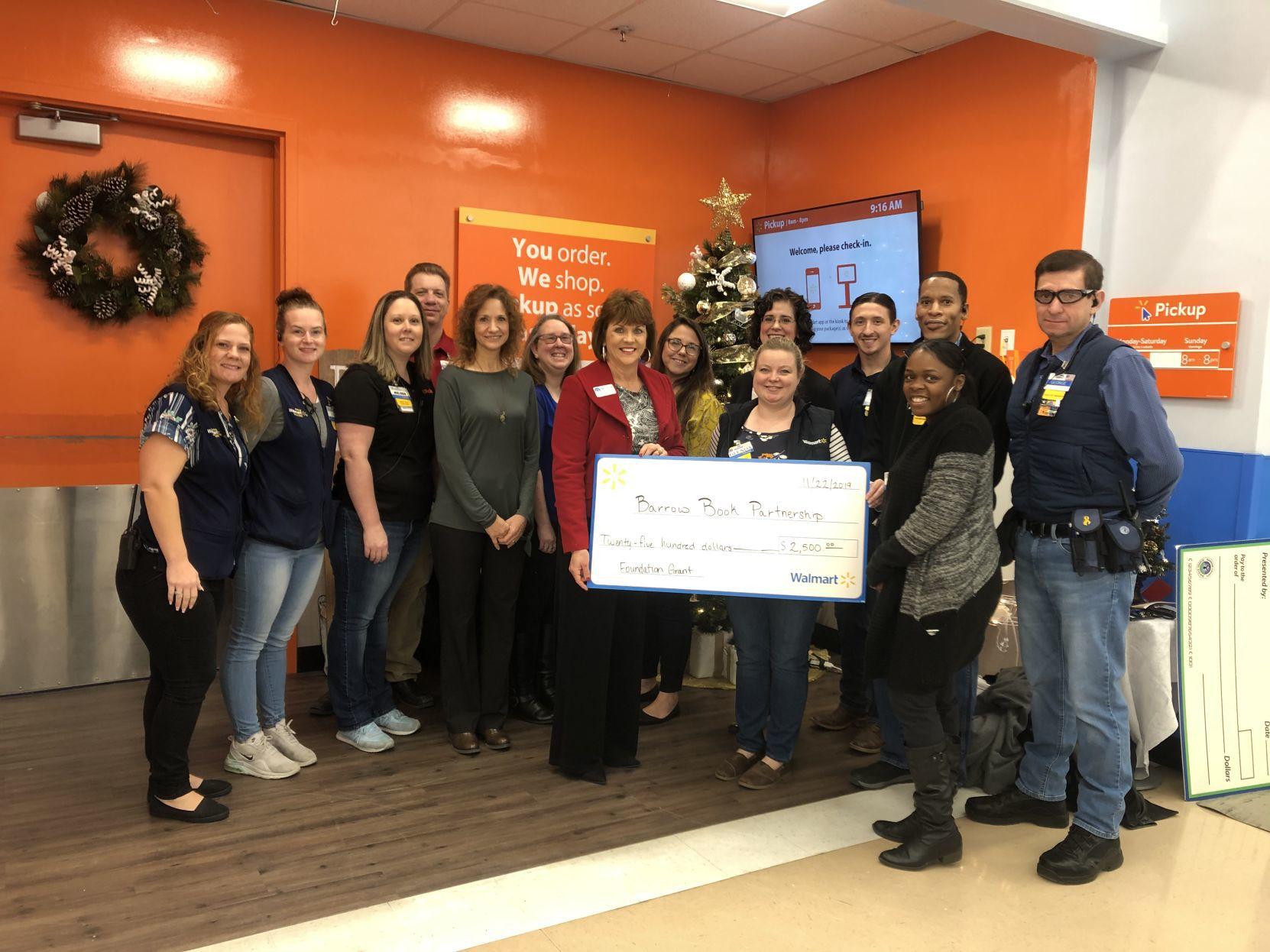 The Barrow Book Partnership, along with the Barrow Community Foundation, received a $2,500 Walmart Community Grant from the Winder store. The Winder Walmart's management team includes several former Barrow County School System students and graduates. The grant will provide age-appropriate books for Barrow's youngest children (birth to 5 years old) to build their home library, and will provide parent educational opportunities about how to nurture the growth of a child's learning foundation through daily reading, according to leaders. Parents will also receive information about all the free resources available at our three Barrow public libraries and opportunities to register for free PINES public library cards. “Thank you, Winder Walmart, for supporting our mission!” leaders said.

Steffanie Sorrells has been named Businesswoman of the Year for 2019 by the Barrow County Chamber of Commerce.

Sorrells, the vice president of merchant service and program manager at Bank OZK in Winder, received the award Tuesday, Nov. 19, during the chamber’s annual Businesswoman of the Year luncheon at The Georgia Club in Statham. Other nominees included Beth McIntyre, director of the Piedmont Regional Library System; Penny Gober, CEO of the Learn N Play Academy; and Angie Putman, executive director of the YMCA of Georgia’s Piedmont. Author and syndicated columnist Ronda Rich was the guest speaker.

Sorrells has fundraised for and served on the board of numerous organizations in Barrow County, including the Boys and Girls Club, Habitat for Humanity, Barrow County Young Life, the Go Red committee for the American Heart Association, the YMCA, the American Red Cross, the chamber of commerce, and multiple school and booster clubs.

But it has been her involvement with the Rotary Club of Winder that put her over the top, according to the chamber’s Women in Business Committee.

“With her leadership, she has taken the club to the next level,” committee leaders said. “With so many membership organizations today declining, this club has seen a surge in leadership. Steffanie accepted the challenge to move Rotary of Winder to the next level. Membership has typically been led by men in the club. With courage and vision, that leadership model has changed over the years. Women have accepted the challenge and Steffanie, along with other women in the club, have stepped up to lead.”

McIntyre said Sorrells is “the most energetic person I’ve ever known.”

“She’s a servant leader,” McIntyre said. “So many energetic people tend to take on too much and do things themselves. I’ve never seen a leader that is so skilled in bringing out the best in people.

“…She is dedicated to excellence. She works tirelessly to make sure that the tasks she is responsible for are not just done, but done the best they can be. I don’t know when she sleeps…she is always working to make her community and her world a better place.

“And we are all better people for knowing her.”

The City of Winder is eyeing an increase to its wastewater rates for the remainder of the current fiscal year and additional increases over the coming fiscal years as it attempts to chip away at an operating deficit in its sewer fund.

The city council was presented with a rate study and the recommended increase during a Thursday, Nov. 21 work session. The council will discuss the recommendation again at its work session scheduled for Monday, Dec. 2, and then hold a vote at its Tuesday, Dec. 3 meeting. The new rates, if approved would take effect Jan. 1.

The city is trying to make self-sufficient the wastewater system, which operated at just under $3 million in the hole in Fiscal Year 2019 and had to be balanced with water and gas funds. Wilhelm said the recommended increase for the remainder of FY2020 would bring in a projected $433,343 in additional revenues, but the system would still have a roughly $2.5 million deficit. City officials say the increases are needed to address upgrades to wastewater infrastructure that will eventually be necessary. Making the wastewater system self-sufficient would allow the city to keep water and gas revenues funding projects in those categories, city administrator Donald Toms said.

A 2018 rate study by Sills initially recommended an overall average rate increase of 6 percent for the city’s water and wastewater system for FY2019 and 5 percent for FY2020. But as Barrow County challenged the rate differential for customers outside the city limits, the city council ultimately approved a 2-percent increase for FY2019 and is now considering an average 1.6-percent increase for the remainder of FY2020.

Because of those lower-than-recommended rate increases, the average rate increases are expected to be significant in years 2021 and 2022, according to Sills’ findings. His recommendation currently calls for 10-percent increases in those two years and a 3-percent increase in FY2023. However, he said in his report, changes in the city’s capital improvement plan (CIP) schedule and loan terms could shift those increases across several more years.

The operating deficit for the wastewater system “is a drain that keeps (the city) from being able to do what we want to do,” Mayor David Maynard said. “If we keep delaying (the increase), it’s more of a drain. I think the sooner we (make the system self-sufficient), the fairer it is (for the customers).”

Other items the council discussed at the Nov. 21 work session that it will vote on at its Dec. 3 meeting include:

•a 120-day moratorium on certain building materials while the city completes updates to its zoning ordinance.

On Nov. 30, Corner Bookstore in Winder will offer readers extra incentives to join in Shop Local Saturday with a visit from five Lighthouse Publishing of the Carolinas authors.

Multi-published, multi-genre, award-winning writers Lindsey Brackett, Sandra Merville Hart, Ane Mulligan, Pat Nichols and Denise Weimer will sign their most recent releases and enjoy refreshments with the public from noon to 4 p.m, according to a news release.

The following local Christmas-themed events are coming up in Barrow County:

•The City of Auburn will host "Sounding Off the Christmas Season" from 5-8 p.m. Sunday, Dec. 1, at city hall, 1369 4th Ave. There will be live singing and dancing performances, an ice rink and a live Nativity scene. The Grinch and Cindy Lou Who, along with Santa Claus and his reindeer, will be in attendance.

•The City of Auburn will host a "Polar Express" event from noon to 3 p.m. Saturday, Dec. 7, at 1369 4th Ave. Visit with the train conductor and Santa, and have lunch with characters from the movie "The Polar Express" and other children's movies. The event includes a free hot dog for the first 200 guests with a donation of school supplies or non-perishable food items. The event is co-sponsored by Whistlestop Shops, Enchanted Events, Southern Belles and Beaus, and the Barrow County Veterans Resource Center. For more information, call 770-963-4002, ext. 204.

•The City of Winder will host its 71st annual Christmas Parade downtown at 2 p.m. Saturday, Dec. 14, with the theme "Candyland Christmas." Group/float registration can be done and food/vendor applications can be submitted on the city's website. The registration deadline is Saturday, Nov. 30. The parade's grand marshal is to be announced. The parade will begin at Ingle's on North Broad Street and end at Jug Tavern Park. The rain date is Sunday, Dec. 15, at 4 p.m.