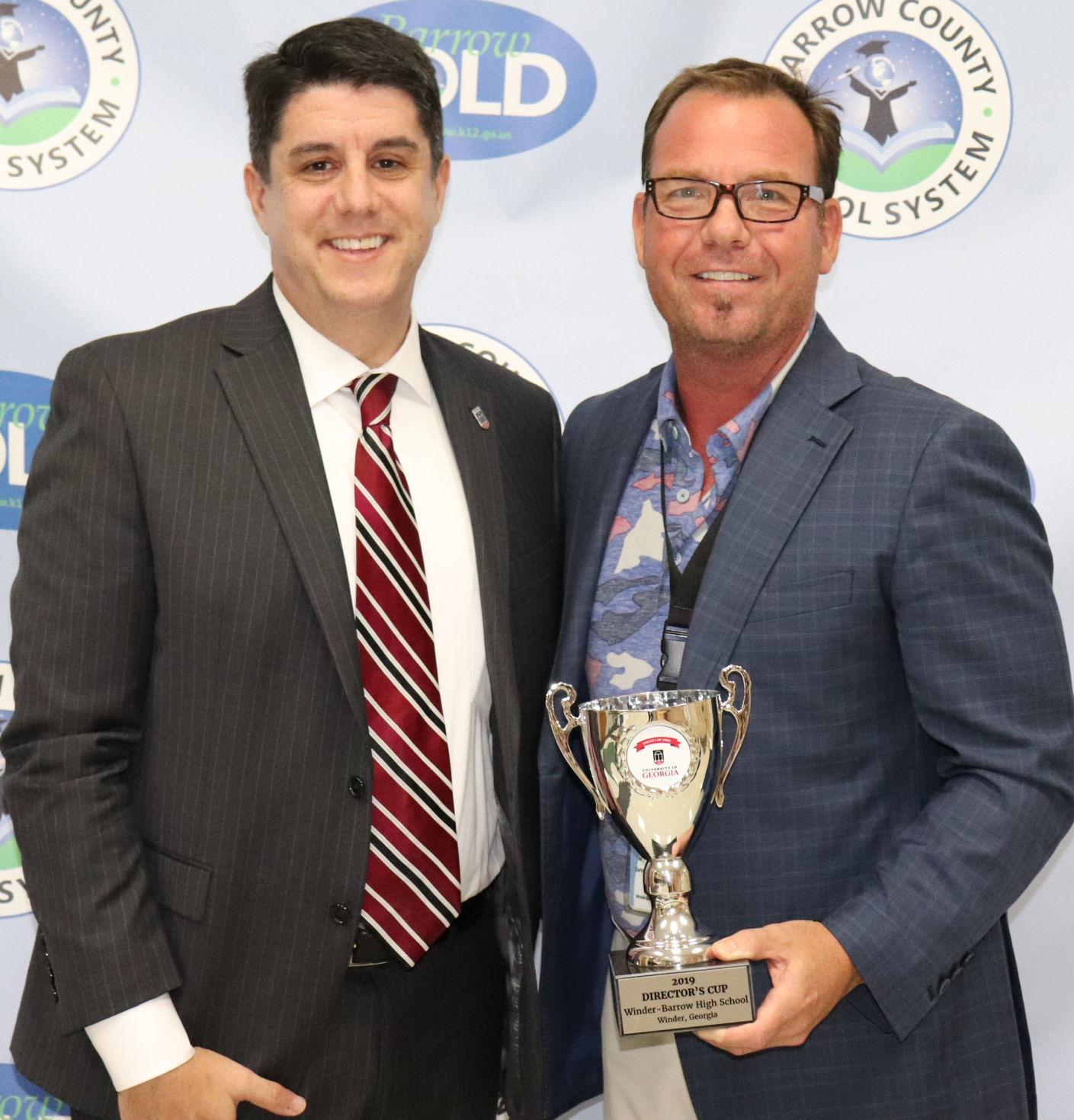 The Director's Cup is an award the University of Georgia created three years ago to recognize the high school whose first-year students performed the best in their freshman year at UGA. UGA considers those high schools who have 10 or more students in the  first-year class. Winder-Barrow High School won the 2019 award for freshmen starting in the fall of 2018. Patrick Winder, with the UGA admissions office, presented the award to WBHS principal Al Darby at the October BOE meeting. WBHS students at UGA had a 3.804 GPA at the end of their first-year. There were 129 high schools that sent UGA 10 or more students in fall 2018. Whitewater High School in Fayetteville won the first award for 2017 and Madison County High School got the one for 2018. 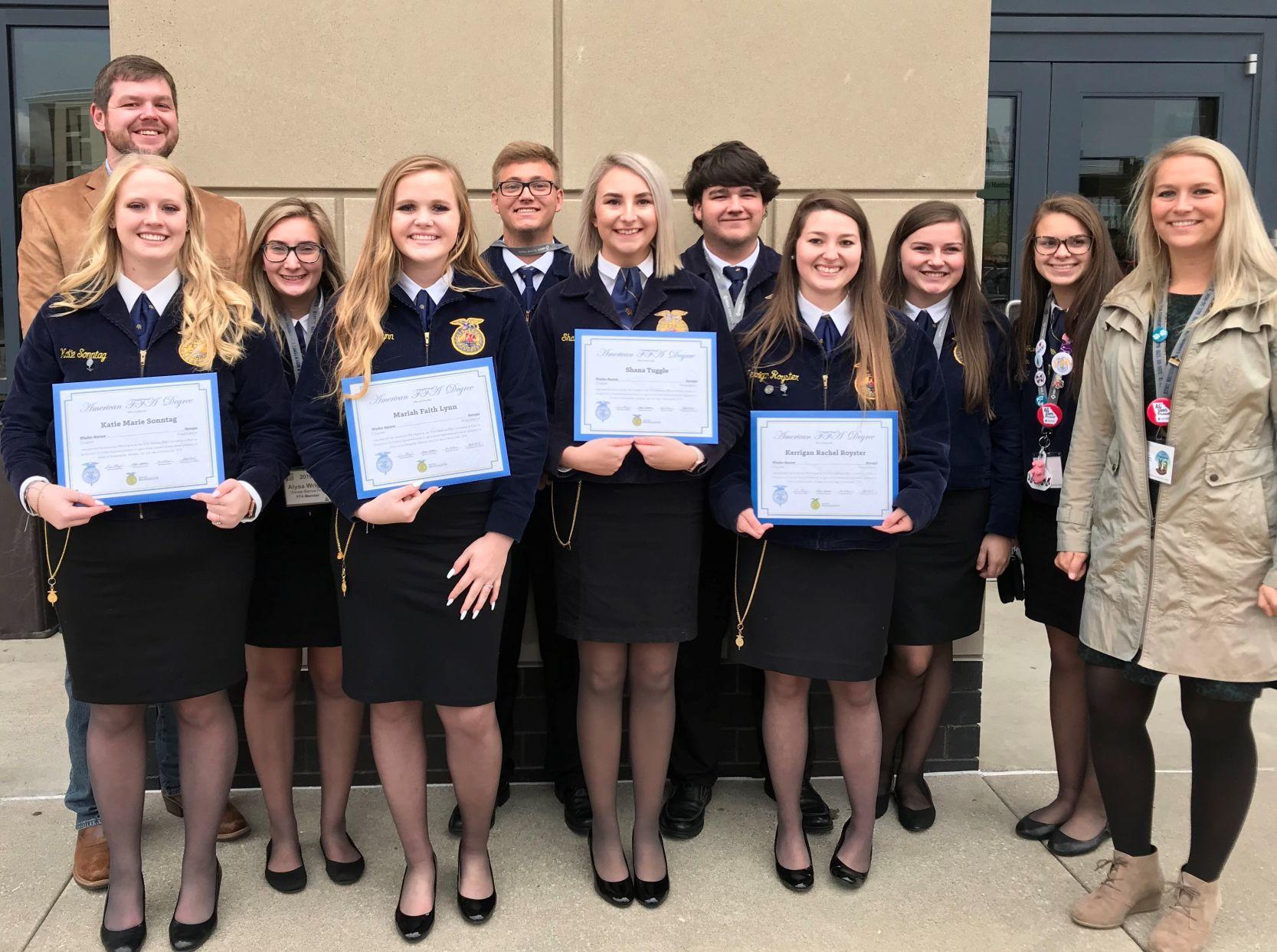 Cole Barnes, Bryson Hardy, Kyleigh Norwood, Lauren Woods and Alysa Wright from the Winder-Barrow High School FFA chapter attended the 92nd National Convention and Expo in Indianapolis, Ind., from Oct. 29 through Nov. 1 with FFA advisors Ashley Best and James Hale. Members spent five days learning more about premiere leadership, personal growth and career success. Students went to workshops, including “Riding The Woah: Finding Comfort And Discomfort,” where they learned how discomfort can bring personal growth, and the workshop called “Just Dance Dilemma Solver.” In that workshop, they learned new activities to plan for chapter meetings. On Oct. 31, everyone attended the FFA Blue Room. In the Blue Room, students had the opportunity to hear from the NASA Administrator, James Bridenstine, about the enhancement of agricultural technologies to ensure a more efficient and sustainable future. Members also attended a Brett Young concert with special guest Tenille Townes. On Nov. 1, Caleb Lee, Mariah Lynn, Kerrigan Royster, Katie Sonntag and Shana Tuggle from the WBHS chapter received their American FFA degrees, the highest award in the organization.

Features
Braselton parade and festival salutes past and present
11.14.19

Organizers of the 2019 holiday parade and festival in downtown Braselton will salute its past and its present on Saturday, Nov. 16.

Themed “The Twelve Days of Christmas,” the parade begins at 10:30 a.m. along Hwy. 53. The Jackson County Comprehensive High School band will march and the town’s founding brothers — John Oliver, Henry and Green — depicted by professional actors, are the grand marshals. A number of floats are expected for the family event.

Entertainment on the Town Green begins at 11 a.m. and a holiday marketplace will surround the site. Gift and food items along with photos with Santa await.

The day’s festivities will conclude with the lighting of the tree ceremony on the Town Green at 5 p.m. During the program, bags of fruit and candy will be distributed to the children in attendance, a tradition started by the Braselton brothers in the 1920s.

There will also be musical performances, and of course, a specially-suited visitor to light the tree.

Full information is available at www.downtownbraselton.com . 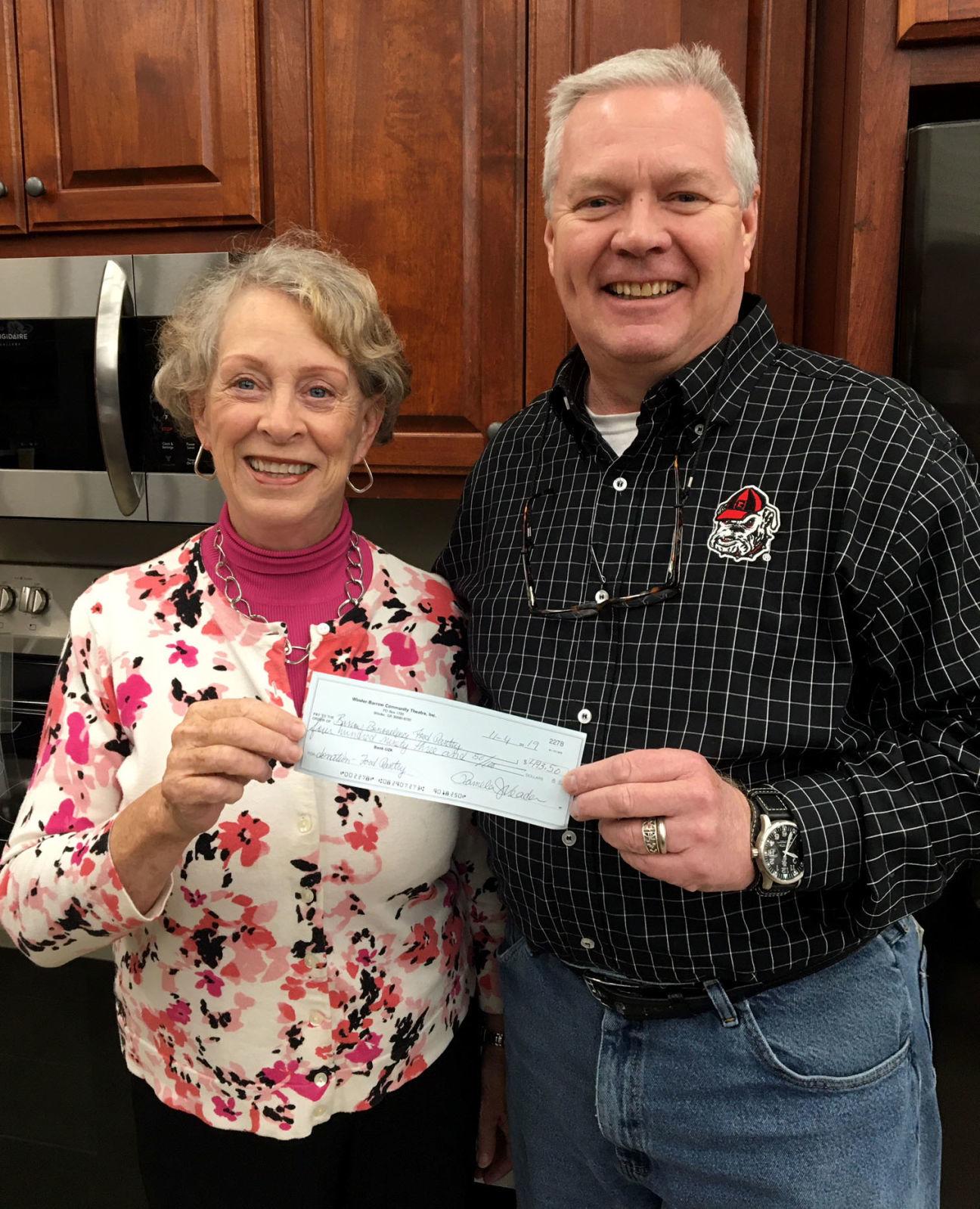 Winder-Barrow Community Theatre recently presented the Barrow County Food Pantry with a check for $493.50 to help restock it with needed food items. The money came from the proceeds of the WBCT production of “It was a Dark and Stormy Night” and from donations given by audience members at the play. Part of the proceeds of every WBCT show is donated to a local non-profit group. Pictured, from left, are Barrow Benevolence Ministries president Gwen Hill and WBCT president Tery Overbey. For more information, check out Barrow County Cooperative Benevolence Ministries online. The Food Pantry is just one of the ways that this ministry feeds hungry people in Barrow County. For more information about Winder-Barrow Community Theatre, go to www.winderbarrowtheatre.org.

“I’m thrilled GHA has chosen to recognize these two outstanding employees,” says Carol Burrell, president and CEO of NGHS. “While Jason and Jeff have long been heroes in our eyes, it’s wonderful to see just how many they’ve impacted – not only in our community, but in our state.”

Grady, who serves as the coordinator of the Northeast Georgia Regional STEMI System, was recognized for his work to improve care for cardiac patients throughout the region. He coordinates emergency care and communication between Emergency Medical Services (EMS) personnel from 17 counties; Emergency Departments (ED) of 12 regional hospitals; and interventional cardiology teams with The Heart Center of Northeast Georgia Medical Center. Together, these groups synchronize efforts to provide fast and efficient treatment to patients suffering severe heart attacks known as STEMI (S-T Segment Elevation Myocardial Infarction).

"Thanks to Grady’s leadership, life-saving care is provided to these patients, on average, in 42 minutes, according to a news release. "With an industry standard average of 90 minutes, the STEMI System’s coordinated care is literally making history, by the second."

Grady also worked with The Medical Center Foundation to ensure that all EMS trucks in NGMC’s 17-county service area were outfitted with special EKG machines that can transmit data directly from the truck to the ED, streamlining the care process for patients. Additionally, paramedics can call the hospital dispatch center with a STEMI diagnosis, allowing these patients to bypass the ED and go straight to the cath lab.

“With Grady’s guidance, this STEMI program has become a national model,” adds Burrell. “It’s incredible to see cardiac teams from all over the country traveling to us to learn about our program and how to implement it in their facilities.”

Jeff Thompson, director of Pastoral Care at NGMC, was also recognized for his "deep-rooted compassion for both patients and co-workers and his dedication to help introduce new programs at NGHS."

“During his tenure at NGHS, Jeff has had an indelible impact on – and is a true advocate for – patients and employees alike,” says Burrell. “He has comforted families in the emergency room, helped bolster our Employee Assistance Program, presided over marriages and has even spoken at funerals. He is the epitome of strength, support and serenity, with a sincere acceptance and love for everyone.”

Thompson championed NGMC’s Ethics Program, which helps address ethical issues at the bedside and gives clinical staff a safe place to raise questions and have discussions. Additionally, he worked to introduce NGMC’s Respecting Choices program, which promotes advance directives and honors the wishes of patients when they make decisions about advanced care planning. With Thompson’s direction, NGMC became the first hospital in the state to offer this program. He also spends time mentoring and teaching current and future chaplains by NGMC’s clinical pastoral education program.