The Jefferson Freedom Festival will be held on Saturday, June 26, from 5 p.m. to 10 p.m. in downtown Jefferson.

Live music from Back in Time will be presented. There will also be food, games and inflatables, vendors and a fireworks show.

The Independence Day Celebration in Commerce will be held on Friday, July 2, from 6 p.m. to 10 p.m. in Spencer Park with the American Legion Albert Gordon Post 56 performing a patriotic introduction to kick off the festivities.

There will be music, vendors, inflatables, food, fun and fireworks.

The schedule of events will include:

Pendergrass will hold an Independence Day celebration on Saturday, July 3, from 5 p.m. to 10 p.m. in downtown. The event will include food vendors and fireworks.

The City of Nicholson will not have a fireworks celebration in July this year. Instead, the city will have a Sept. 4 Fireworks Celebration. The rain date will be Sept. 11.

At the start of the year, city leaders were unsure of what the mandates would be this summer related to the pandemic, so the decision was made to combine the May Daisy Festival and July Independence Celebration into one event that would be held in September.

The Sept. 4 event will include live music by Whisper Whitlock, fireworks and vendors.

The Commerce City Council gave approval for the town's FY22 budgets at its June 21 meeting.

Much of the budget is routine for the year, but it does include several major capital projects.

Among all of its various funds, Commerce looks to generate $27.9 million in revenue during the FY22 fiscal year, up from $25.2 million in the current FY 21 budget.

A large part of the increase comes from an anticipated jump in city natural gas sales to the new SK Battery plants, which will begin coming online during FY22.

Capitol spending in the city is projected to grow from$3.7 million to $5.2 million in FY22.

Among the major proposed projects are:

• $220,500 to acquire land for a new fire station. Building of a new staton and acquiring a new fire truck would come in FY23 or later.

Commerce operates a variety of funds. Proposed income for the town's major funds in FY22 are:

In other business at the June 21 meeting, the council:

• agreed to annex and rezone 33.6 acres on Old Harden Orchard Rd. f rom A-2 to R-1 and R-6. The property is slated for a residential development of 42 single-family homes and 28 townhouses.

• approved an amended contract with SK Battery for its expansion. The expansion was announced last year, but put on hold until the firm's trade dispute was settled this year. According to city manager James Wascher, school taxes on the expansion are not being abated. School taxes on the initial project were put under a series of payments in lieu of taxes (PILOT) payments.

• approved a contract with Garrett Paving for $266,700 to pave 2.55 miles of city streets under the state LMIG contract.

• agreed to approve a variance for .26 acres at 102 College Ave. for a house.  The variance was for smaller setbacks and house size under an existing OCR zoning in the city. The approval had a number of conditions.

• approved a memorandum of understanding with the Georgia Department of Community Affairs for the city Mainstreet accreditation.

• agreed to update the city's notary policy for the public. The service will still be free, but with requirements.

• approved the Jingle Jog 5K for July 17, including some street slow-downs during the event.

Some new rules about burning yard waste are slated to go into effect July 1.

Under the new rules, those burning leaves, limbs and other yard debris will no longer have to formally notify the Georgia  Forestry Commission  in advance.

But those burning debris must now follow new guidelines, including:

• burn sites will have to be 25 ft. from woodlands, fields or other flammable materials.

• burn sites will also have to b  50 ft. away from structures, including homes, outbuildings, sheds and garages.

• all burning will have to be done sunrise to sunset.

• a person will have to attend all fires at all times.

• reasonable precautions will have to be in place, including a pressurized water source (not just buckets), a barrier, available hand tools and weather awareness.

The new rules don't affect the summer burn ban, which remain sin effect from May 1- Sept. 30. Nor do the new rules affect the need for getting a burn permit for commercial agricultural or development burning. 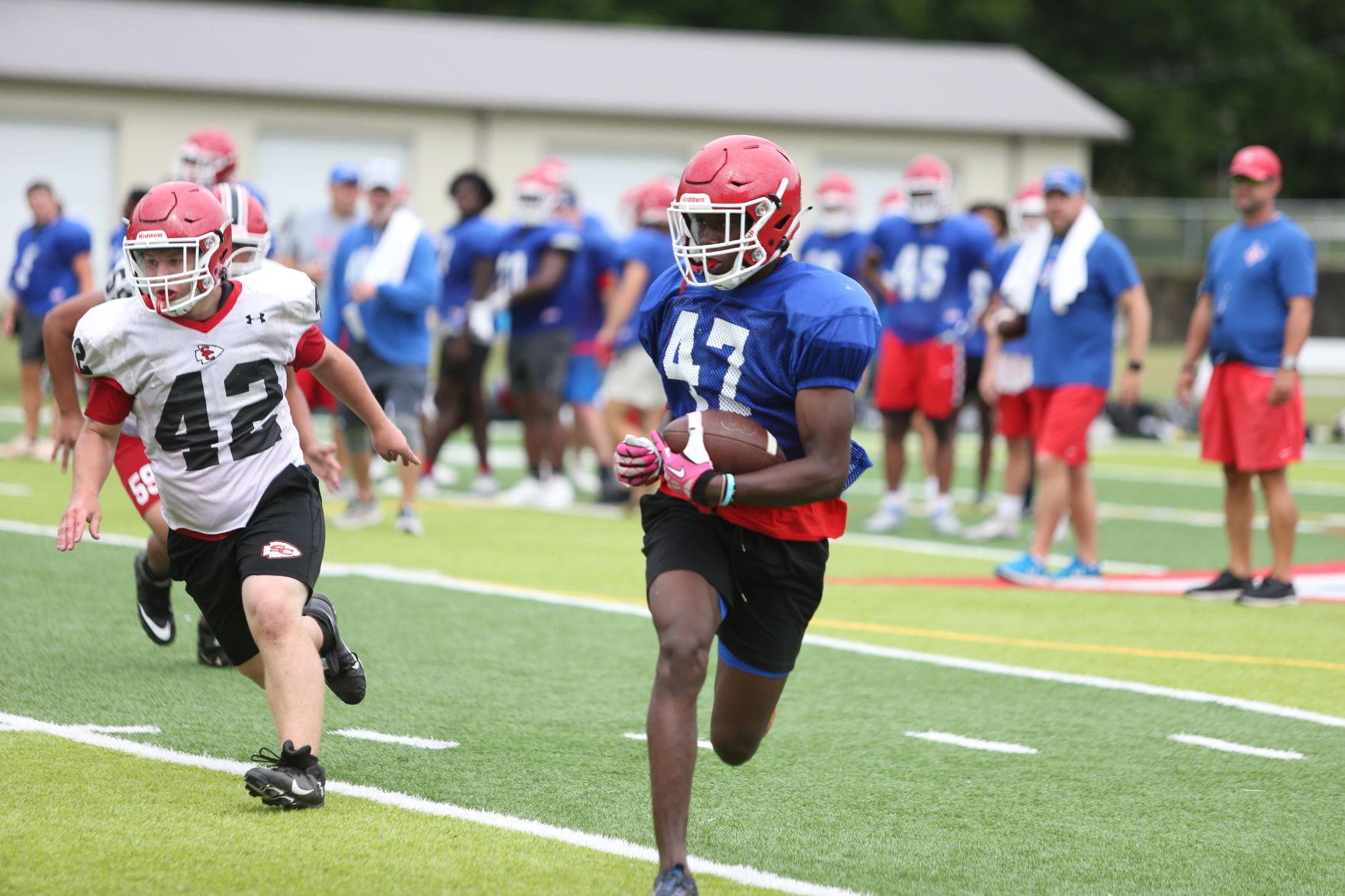 Jefferson's Jordan Perry gets to the perimeter on a carry during the Dragons' scrimmage session with Stephens County Tuesday (June 22). Jefferson hosted a two-day, multi-team padded camp this week as it continues its summer preparations for the fall season.

Funds are now in line to cover the construction of a roundabout at a high-volume intersection just off I-85 on the northside of Jefferson.

The Jefferson City Council OK’d a budget adjustment of $821,763 on June 21 to build a roundabout on Dry Pond Rd. at Jett Roberts Rd. near the Circle K convenience store.

The total dollar figure was based on an engineer’s cost estimate, but city leaders won’t know an exact cost until the project is bid out.

City manager Priscilla Murphy expects the project to be bid out soon.

The intersection, with its proximity to industrial businesses, has seen high volumes of traffic, particularly as motorists arrive and return from work. The location has also generated commercial truck traffic due to the industries in that area.

According to Murphy, the state DOT decided that installing a roundabout would best alleviate traffic problems.

“They think that it will help the flow of traffic a lot better, especially with the trucks,” she said.

In other financial matters, the council approved adjustments setting up budgets for a storm water system project on Sycamore St., Hog Mountain Rd. construction, LMIG money for road improvements and the transfer of water and sewer fund money that was to be used as water credits through March 2021.

The council unanimously approved an amendment to the city’s land use management code to make off-site truck and trailer parking a conditional use on C-2-zoned property — requiring a city council vote. The use is permitted under the current code, requiring no vote.

The change will allow the council more oversight on offsite truck and tractor trailer parking locations as they attempt to remedy trash problems being generated by commercial trucks.

A total of $78,000 of speed camera revenue will be applied toward public safety measures.

The council approved a budget adjustment to apply $40,000 of the revenue toward the purchase of a new police vehicle and $38,000 to purchasing school bus cameras and safety signage around Jefferson Memorial Stadium.

●approved a request to remove a zoning condition from a two-acre property off Winder Hwy. applied in 2001 when rezoned to C-2, commercial. The condition required a 10-foot landscape buffer to make developments invisible from the highway. The applicant, Ken Byce, plans to use the property to house a mini-storage facility. Since trees will be removed, councilman Mark Mobley asked that city staff provide recommendations for the city’s tree bank for similar situations in the future.

•approved a resolution to abandon an additional tract of land previously utilized for Horace Head Rd.’s old intersection with Hwy. 82. The property abandonment is tied to a condition for a variance for Dry Pond Industrial Holdings.

•heard from councilman Cody Cain and mayor Jon Howell, who praised city workers’ efforts in paving the recreation department’s gravel lot. “I think it looks excellent,” Cain said. “ … Everybody is excited about what I think is probably three times the amount of parking that we used to have.” Howell said he was “very delighted that the staff was able to make it come together.” The lot should be ready “in a week or so,” according to Murphy. It is still drying and still lacks parking blocks.

•heard from Murphy that the city’s renovated playgrounds will be hopefully ready before the end of next week.

News
County leaders give initial nod for one EJ subdivision, reject another

County leaders gave an initial nod for one residential project in East Jackson at its June 21 meeting, but rejected another.

The Jackson County Board of Commissioners voted to approve a map amendment request from DuSouth Surveying & Engineering for 17.6 acres at 3110 Ila Rd./Club Dr., Commerce. The applicant is requesting a change in the future land use map from commercial to residential.

A preliminary concept plan shows 16 lots on the property. Developers will now need to go through the rezoning process.

Several residents have voiced opposition to the development and commissioner Chas Hardy urged developers to meet with neighbors prior to starting that rezoning process.

The vote to approve the request was split, with commissioners Marty Seagraves and Jim Hix opposed.

In other business, the county voted to reject a map amendment — also from DuSouth — for 20.23 acres at 1902 Old Hoods Mill Rd., Commerce.

Developers requested a change in the character area from rural to suburban and a change to the future land use map from ag/forestry to residential.

Residents in the area were opposed to the project, citing concerns with traffic, runoff, low water pressure, among others.

The vote to deny the request was split with Ralph Richardson Jr. opposed.

In other zoning-related business at its June 21 meeting, the board:

•approved a map amendment request from Keith Hayes for a little under ½ acre at 1105 Winder Hwy. Hayes requested a future land use map change from residential to commercial. Plans include an office space.

•tabled a map amendment request from Brian Pierce for 10.34 acres at 524 Dan Waters Rd. The applicant is requesting a change in the character area map from ag to rural.