Contrary to apparent recent rumors, the Barrow County School System is not actively planning to move to online-only instruction between Thanksgiving and Christmas, though that could be an option if the local coronavirus situation deteriorates to levels that might trigger school closures, superintendent Chris McMichael said Tuesday, Oct. 27.

Addressing the board of education at the end of its work session and called meeting, McMichael said he and school district officials were aware of the chatter but said the plan for now is to keep the schools open and continue with the mitigation measures it has had in place since students began returning to campuses for instruction Sept. 8.

“We’re holding pretty steady right now,” McMichael said. “If it gets worse and we start seeing more spread, that might be the plan (to move classes back 100-percent online). It’s a dangerous time in some ways. We’re in a good spot, but we’re also watching the numbers very closely.”

On Thursday, Oct. 29, the Georgia Department of Public Health reported 11 newly-confirmed COVID-19 cases in Barrow County, bringing the cumulative total of cases in the county since the onset of the pandemic to 2,631. Fifty-one county residents have died, with the most recent death occurring Oct. 16, according to DPH data.

Barrow County’s number of new daily cases has remained steady in recent weeks, and its 14-day average from Oct. 16-29 was 15.4 new daily cases per 100,000 people — keeping the county firmly in the “yellow zone” with “moderate” community spread, but well below the previous peak in numbers in mid-to-late summer that led the district to begin its year entirely online Aug. 17 before starting to phase in the return of students to classrooms. About 26 percent of the district’s more than 14,000 students opted to remain in virtual learning, either for the first semester or first nine weeks.

The district would likely not make a move back to 100-percent virtual learning unless the spread escalated back into the “red zone” with 25 or more new daily cases per 100,000 people consistently. Officials have maintained a cautiously optimistic tone, though the state of Georgia has seen a rise over the past month in its seven-day rolling average of new cases since a low point in early October.

While Georgia’s current situation is not as severe as it was in the summer, the U.S. has seen record-breaking numbers of daily infections, particularly in the Midwest and western states, and public health experts have expressed concerns those trends are working their way into Georgia and have urged people to continue to be diligent about mask-wearing, social distancing and hygiene with the traditional flu season and much cooler weather on the way.

DPH reported 123 public COVID-19 outbreaks around the state from Oct. 18-24 — an increase of 30 from the previous week — and officials said schools were among the leading settings for those outbreaks.

“These outbreaks are occurring in settings where people are physically congregating and underscore the need for physical distancing and source control,” officials said in a news release.

In Barrow County, the school district has enacted a mask-wearing mandate on its campuses, put in increased social-distancing measures and limited attendance at athletic events and school functions.

The district also has some 140 employees who have been trained through a Johns Hopkins University contact-tracing program in an attempt to stem the spread and prevent any major outbreaks at its schools.

“It is a fallback plan (to go back to online-only learning) that if things were to get back up into the red zone and cause that, that would be a good time for that,” McMichael said, “but we really don’t want to do that and we will do everything we can to try to keep us out of doing that. We’re in fairly decent shape.”

The district, every Thursday, has been providing weekly data to the public on the number of students and employees impacted by the coronavirus. According to the latest data released Thursday, Oct. 28, five students tested positive for COVID-19 from Oct. 22-28, another student was quarantined due to a “probable” case, and 58 students were quarantined as a precaution due to direct contact with someone with a confirmed-positive or probable case. During the same timeframe, four staff members tested positive, three were quarantined as a “probable” case and 13 were quarantined due to direct contact with someone with a positive or suspected case.

Fifty-eight students were kept out of or sent home from school Monday, Oct. 26, including 20 from Winder-Barrow High School, 19 from Apalachee High School and 18 at Haymon-Morris Middle School.

Since the start of the academic year Aug. 17, the district has reported 35 confirmed cases among students quarantined 765 additional students for precautionary reasons. Since July 27, 57 employees have tested positive and 359 have quarantined as a precaution, though the district has not been in a situation, since the academic year began, where so many teachers have been out of school that it has had to temporarily close a campus.

“It’s not great that anyone is dealing (with COVID-19), but those aren’t astronomical numbers for a district our size at this point,” McMichael said. 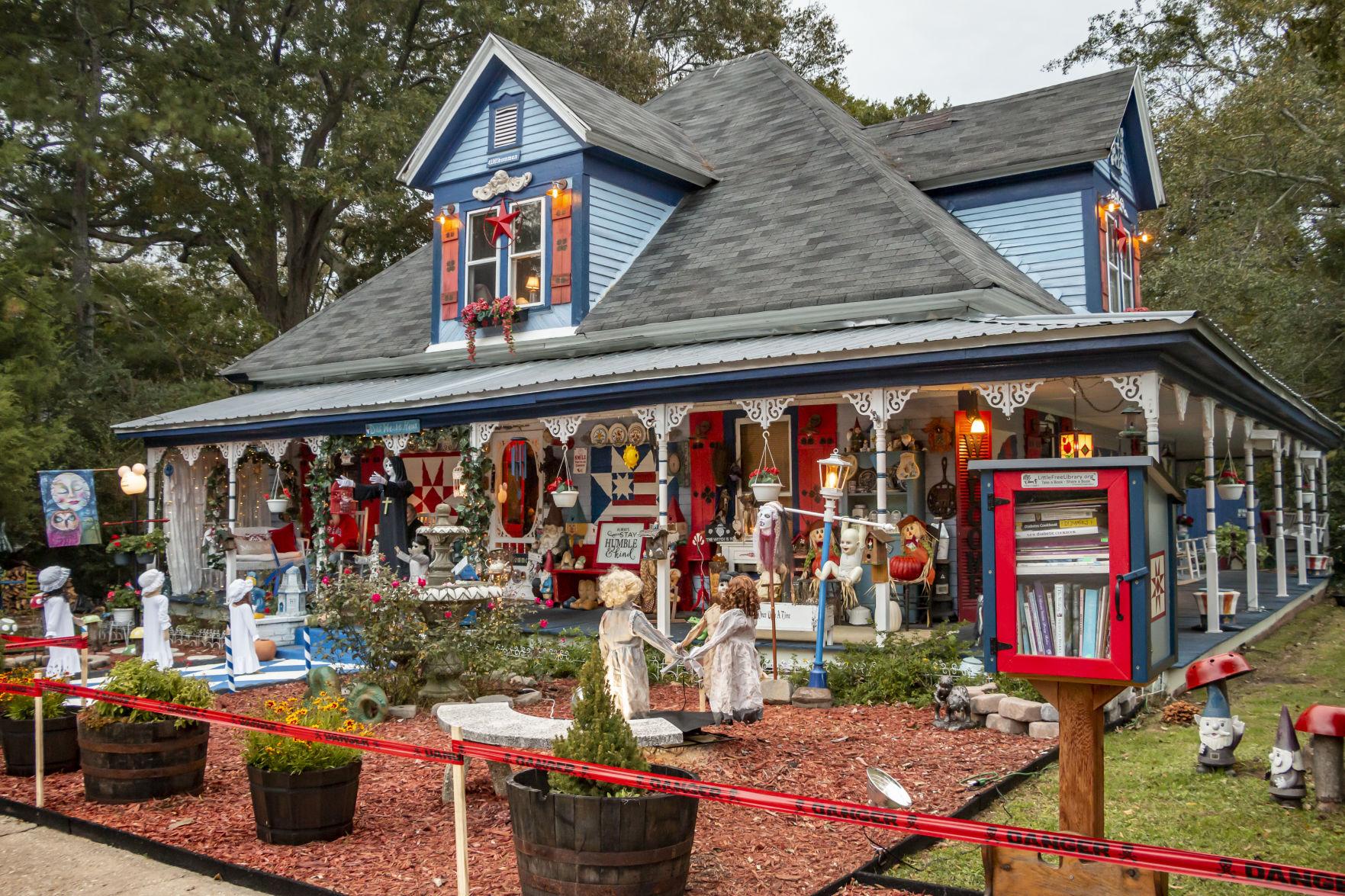 Jim and Kathy White’s house enchanted thousands of trick-or-treaters in Statham as they stopped to fill their sacks full of sweet treats on Halloween night. The couple has enjoyed decorating for the Halloween walk for three years. Residents only have one day to view the display as it is put up the night before Halloween and then disassembled after the fall festival walk. The Whites started decorating their home with a Disney theme and began enhancing their home with spookier décor as some townspeople expressed that they wanted a spookier theme. The Whites still feature their Disney décor with a dedicated section to the left side of their yard. 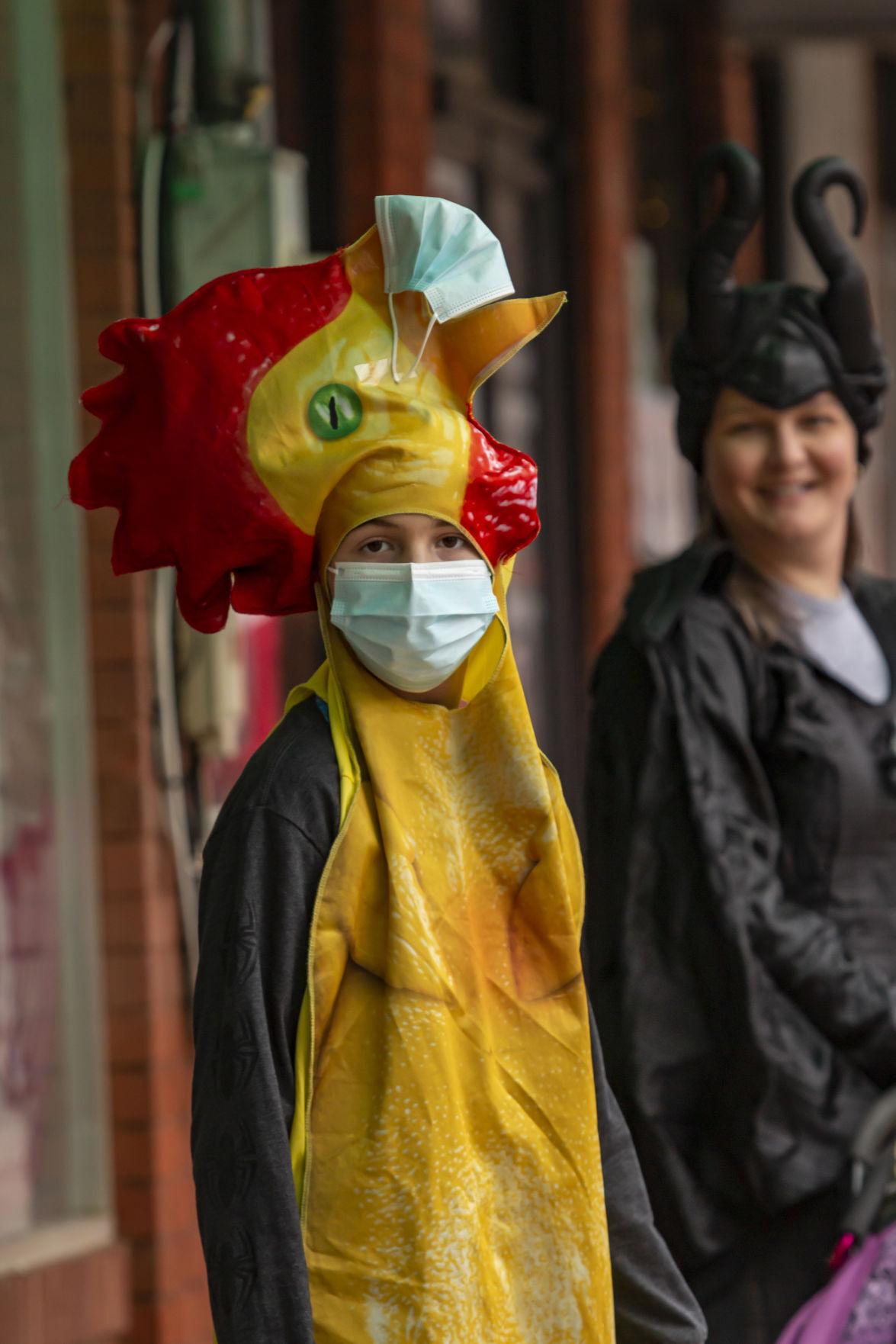 Joseph Nichols, 9, dressed up as a COVID chicken to go trick-or-treating in downtown Statham on Saturday, Oct. 31. 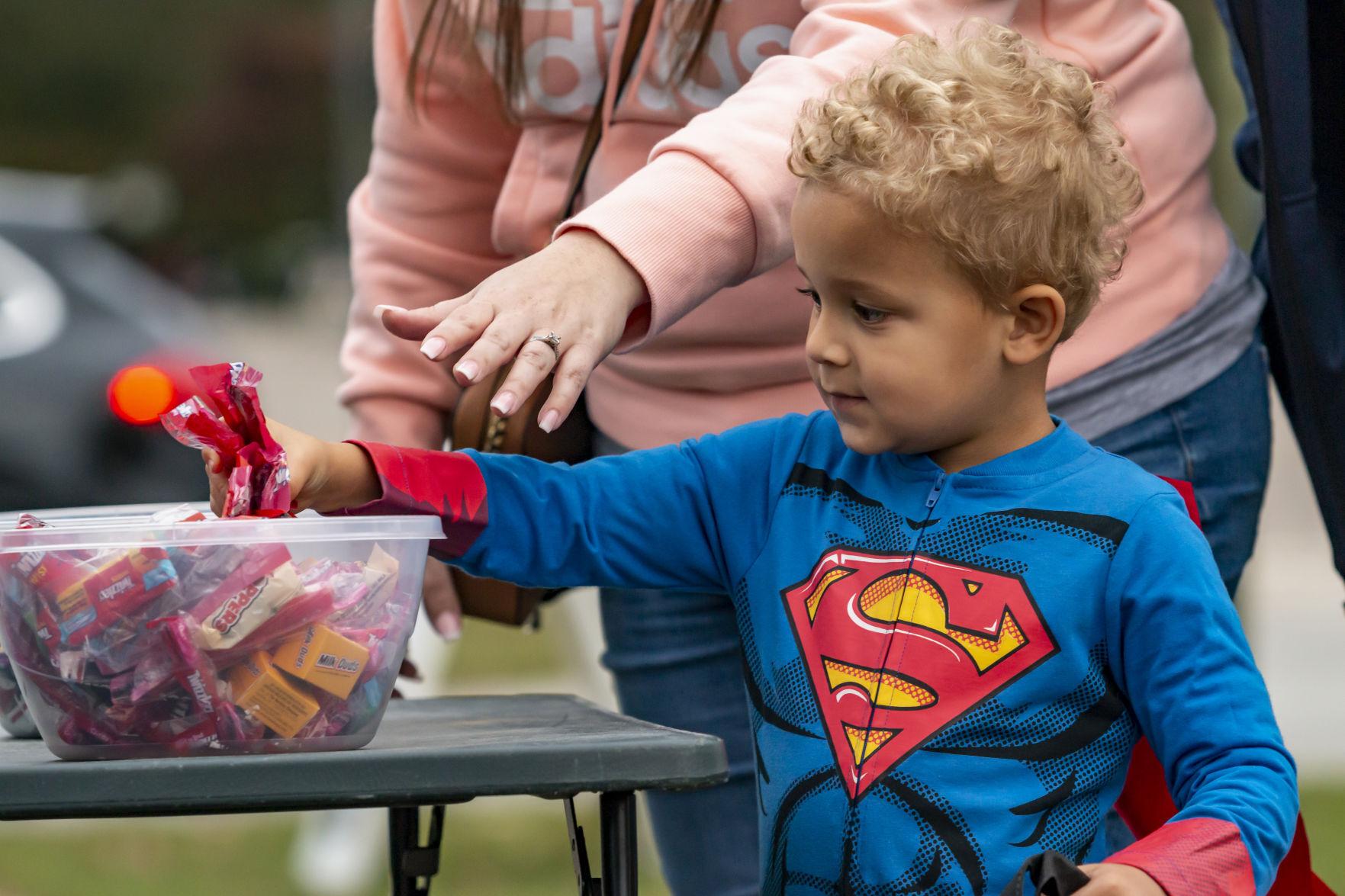 A young superhero is shown trick-or-treating in downtown Statham on Halloween night. Here, Dominic Volquez, 3, is shown at the First Baptist Church of Statham. 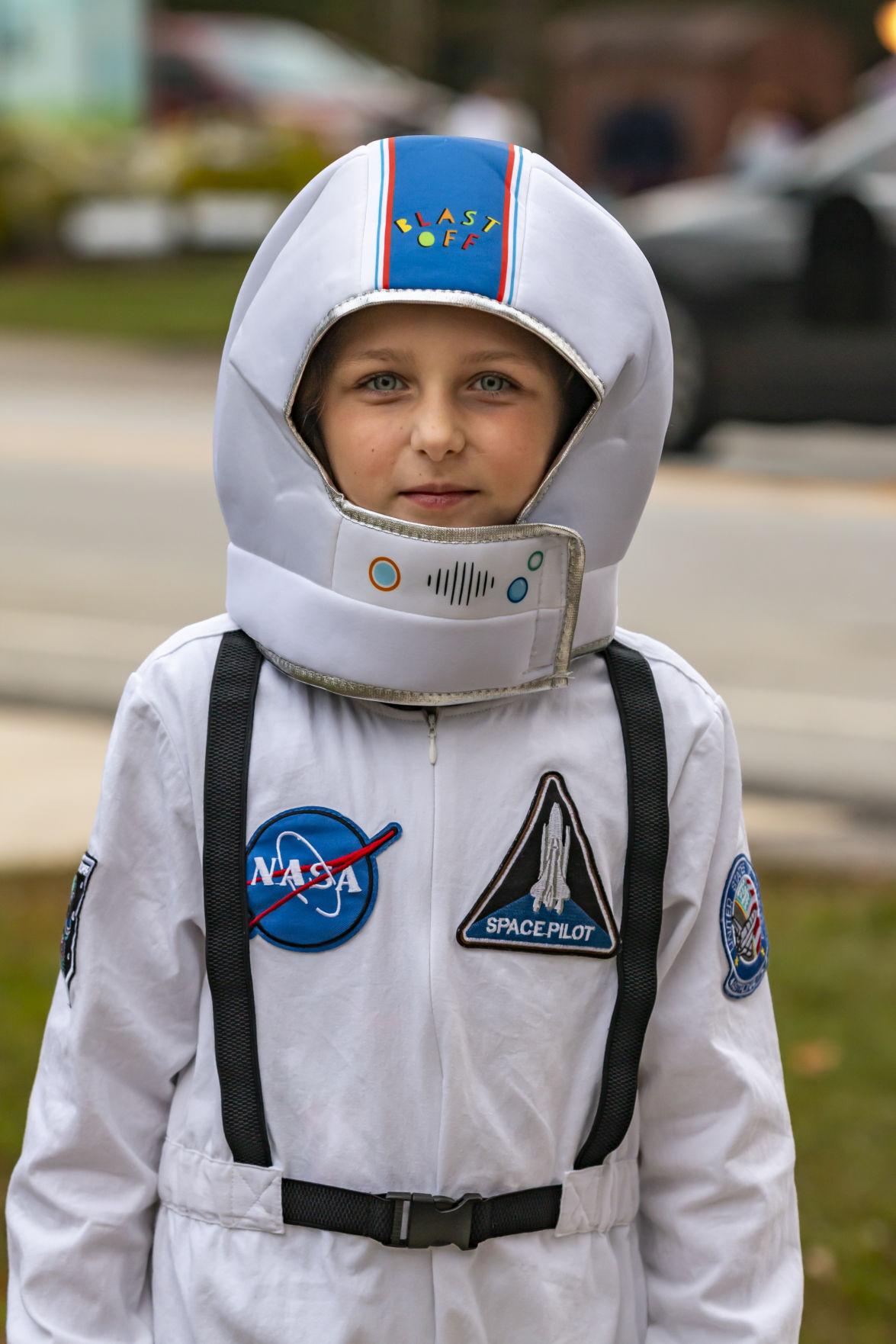 Alexa Sudduth, 9, suited up in her astronaut uniform to go trick-or-treating in downtown Statham on Saturday, Oct. 31.

The Barrow County School System is planning repairs and renovations to the Center for Innovative Teaching on West Midland Avenue and its transportation on building on Hal Jackson Road in Winder, with the goal of starting the work next summer.

The county board of education, on Tuesday, Nov. 3, approved an architectural services contract with Cunningham Forehand Matthews and Moore to assist in project planning, design and construction management. The firm has handled numerous projects for the school district over the last several years, including the new Barrow Arts and Sciences Academy.

The district would pay the architects up to $100,000 between the two buildings — with the services being funded through ESPLOST proceeds — and officials hope to make a recommendation on a construction contract with a guaranteed maximum price next month, said Joe Perno, the district’s assistant superintendent for system operations.

In other business Tuesday, the board:

•heard that ELOST collections were relatively flat in October with the district bringing in $1.21 million. The district brought in about $1.7 million in September, but nearly $500,000 of that came from a state reimbursement after an audit discovered local governments around the state were not receiving all of the sales tax proceeds they were apparently due.

•approved the largely federally-funded purchase of network switch hardware from MXN of Woodstock in the amount of $1.09 million. John St. Clair, the school district’s director of technology, said the new network switch hardware will make the system’s network speeds faster. Of the purchase price, 80 percent will be funded through the federal e-rate program, leaving the district on the hook for $260,523. That money was previously budgeted for Fiscal Year 2021 and will be paid for through ESPLOST proceeds.

•placed on the table for public review the purchase of a new Advanced Placement (AP) Human Geography textbook for high school students. The book would replace an outdated textbook and the purchase would be for 90 books at $175 each, said Jennifer Wood, the district’s secondary education and CTAE director. The board will vote on the purchase at its Dec. 1 meeting.

•approved the purchase of text kits for literacy instruction for students in grades K-5 at Kennedy Elementary from Heinemmman, in the amount of $29,294.

The Barrow County MLK Committee has announced that it will not hold its annual Dr. Martin Luther King Jr. Day events in January due to coronavirus concerns.

For the past 35 years since the declaration of a federal holiday in honor of the late civil rights icon on the third Monday of January, the Barrow County committee has hosted MLK festivities, including a Sunday night gospel concert and a Monday morning march through downtown Winder followed by an afternoon program at White Oak Spring Missionary Baptist Church.

"We’d like to take this opportunity to thank you for your support over the years," committee leaders said in a statement. "We look forward to resuming these events (in 2022). In the meantime, we ask everyone to observe safety protocols and stay safe."