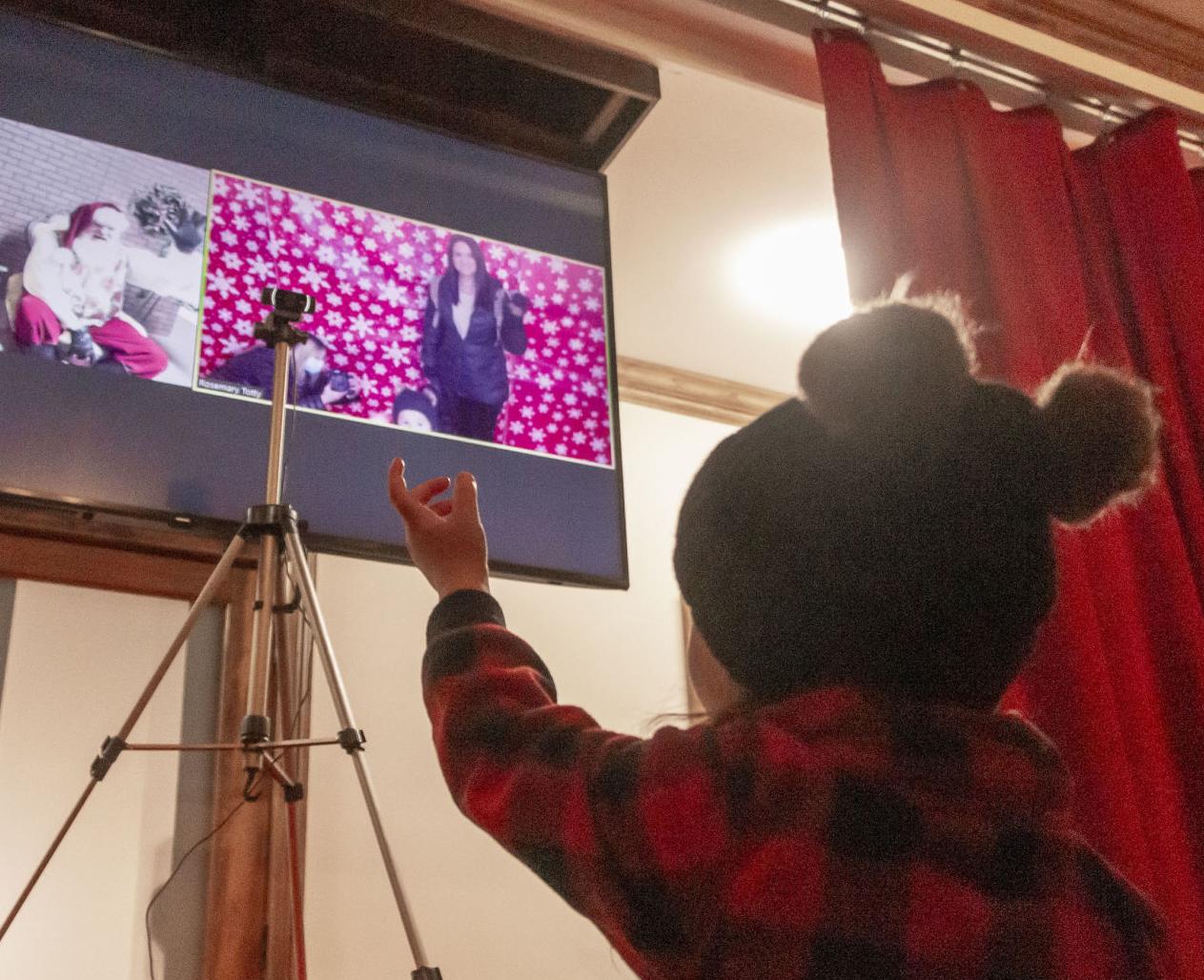 Santa was playing it safe this year as the Coronavirus (COVID 19) pandemic is on the rise. Here, Ember Whitmire, 3, waves to Santa on a projector screen inside Lula’s historic train depot during the town’s annual Christmas celebration. Her mother, Jenny Whitmire, is shown with her to the right on the screen. Children received a goody bag and were still able to tell Santa what is on their wish list though a microphone system while the internet lasted.

Twelve Banks County students currently have tested positive for COVID-19, according to the latest information released from the Banks County School System. There are 2,735 students in the school system.

There are currently 136 students quarantined due to possible exposure.

The school system has five employees with a current positive COVID-19 status. There are 405 school employees.

There are currently six employees quarantined due to possible exposure.

County-wide, 827 cases of COVID-19 have been reported since March. The number of cases is up 63 in the past week, according to reports from the Georgia Department of Public Health. Banks County has a population of 19,982.

Banks County has had a total of 12 deaths since March and 100 hospitalizations attributed to COVID-19.

The Banks County Planning Commission, at the monthly meeting on Tuesday, Dec. 1, approved a rezoning request and a special use permit.

The rezoning request was approved unanimously for Michael Veal, Gainesville, to place a vehicle sales business on 5.532 acres located on Old Hwy. 441 North.

The property is currently zoned ARR (Agricultural, Rural, Residential) and the zoning will change to C2 (Commercial) to allow Veal to operate a business that sells $20,000-$30,000 trucks.

Veal said he plans to construct a 50x80 foot shop on the property and an area to display the trucks. He said his business averages selling 13 to 15 trucks per month.

Veal said he would not be doing any repairs or body work at the site.

No one spoke in opposition to this request.

A special use request was unanimously approved, with five conditions, for Paradise Recreation of Georgia Inc., owned by Ramon and Marjorie Mantilla, Suwanee, to operate a retreat on 19.71 acres at 256 Hebron Rd.

M. Mantilla said she and her husband have owned the property for six to seven years and they want to provide a recreational retreat for churches, families and corporations.

Adjoining property owner Tom Weeks voiced his concern with the approximately 900 feet that joins his property that is not fenced and people being able to come onto his property and the noise that could come from allowing parties to be held on the property.

M. Mantilla agreed to address the concerns for Weeks.

The commission recommended the following conditions as part of the approval: must have a staff member present when guests are on the property; quiet time begins at 10 p.m.; post the property adjoining the Weeks property according to state regulations; all dogs on property must be leashed; and two-night maximum stay for guests.

Banks
Three races to be on ballot in run-off

Three races will be on the ballot in the Jan. 5 run-off election.

The Public Service Commission race between incumbent Lauren "Bubba" McDonald (R) and Daniel Blackman (D) will be on the ballot.

McDonald has been on the commission for 22 years and led Blackman, but didn’t win a majority. Libertarian Nathan Wilson won enough votes to force the race to a runoff.

The statewide runoff between McDonald and Blackman was originally scheduled for Dec. 1, but Secretary of State Brad Raffensperger changed it to Jan. 5.

All Election Day voting, on Jan. 5, will be at the Banks County Recreation Department, from 7 a.m. to 7 p.m.

The machine recount was completed Nov. 30 in the county as part of a statewide recount requested by the Trump administration.

Trump filed numerous unsuccessful court challenges in Georgia and several other swing states in a bid to overturn election results where he lost to Biden.

The state's recount comes as election officials prepare for a runoff on Jan. 5, 2021, for Georgia's two senate seats. The balance of power in the Senate could be decided in those races.

Jackson
Christmas in the Park planned in Maysville

The event will include visits with Santa, shopping with local vendors, the presentation of "The Polar Express" at dark, boiled peanuts, inflatables, hot chocolate, concessions, S'mores, artwork displays and music by the East Jackson Middle School Chorus.

Beaverdam Baptist Church will present its “One Holy Night – A Live Nativity” on Friday, Dec. 13, and Saturday, Dec. 14.

There will be Christmas cookies, cakes, coffee and hot cocoa served each night to those attending.

The church pastor is Chuck Cook.

If you are a Banks County resident and need assistance installing or checking smoke alarms, call 706-677-1812 and Banks County Fire & EMS can install free smoke alarms or check the batteries for you to ensure yours are working correctly.

FACTS AND FIGURES ABOUT SMOKE ALARMS:

•Almost three of every five home fire deaths resulted from fires in homes with no smoke alarms (40 percent) or no working smoke alarms (17 percent).

•No smoke alarms were present in two out of every five (40 percent) home fire deaths.