News
Pendergrass will live, but with changes

A lot of residential construction is taking place in Pendergrass. That resulted in a move to abolish the town due to the growth's potential impact on local schools.

The City of Pendergrass won't be abolished this year, but Rep. Tommy Benton has introduced a new bill that would change how the city is governed.

HB 740 was introduced by Benton on March 8. The new legislation would add two more members to the city council, making it a 6-member board in addition to the mayor's position.

The legislation also adds a lengthy code of ethics to the city's charter that limits what local public officials can do business-wise with the city.

The ethics code is clearly aimed at Mayor Monk Tolbert, who owns a substantial amount of land in and around the city, some of which he has developed, and at city administrator Rob Russell who is in business with Tolbert in redeveloping some older properties in the town.

The new legislation comes following a House committee hearing last week in which the Governmental Affairs Committee didn't take any action on Benton's original bill that would have abolished the town.

At that hearing, Benton outlined some of the problems from Pendergrass' past and asked committee members to help him fix the town.

Tolbert, city clerk Renee Martinez and two private citizens from the town spoke in defense of the city government.

Tolbert said he wasn't clear on why Benton had moved to abolish the town and that the representative hadn't had a discussion with him or other city officials before introducing the legislation.

Martinez told the House committee that past problems had been fixed in the town's government.

"There was a bump in the road, but Pendergrass is a different place now," she said of the "whistleblower" controversy that exploded in 2009.

Referring to Benton, she said he hadn't called city hall to ask questions or clarify any information.

Citizen Meredith Davidson spoke to the committee by Zoom, saying she  had lived in Pendergrass during its troubled times of 2009 and even talked with Benton at that time about abolishing the town.

Davidson went on to say that the past problem was Tolbert's mother-in-law, who controlled the town in 2009.

"Yes, she was putting her renters on the city council, but that is not the case today," Davidson said.

Since 2009, Tolbert's mother-in-law has passed away and he untimely inherited the large amount of property she owned, including old rental properties. Davidson praised Tolbert for having torn down what she called "dilapidated" rental houses and redeveloped the property with new homes.

Benton said this week that he believes town official broke some of the city's own zoning codes and rules in a rush to establishment residential developments.

He said the town could have also chosen to spread out the housing developments over several years — instead, a lot of new homes will come on line this year, a move that Benton believes could overwhelm local schools.

A related bill Benton introduced this year would allow local school systems to have a seat on local planning commissions. But that legislation has met with resistance from state municipal and county lobbying groups he said.

In other legislative action, Benton said a bill he sponsored that would allow state retirement groups to invest up to 10% in alternative investments passed out of committee on March 8.

Benton also said that the House version of the state budget added back funding for developmental disabilities and most of the education QBE funding that was cut last year. He said hopes the remainder of the QBE funds will be added back next year. 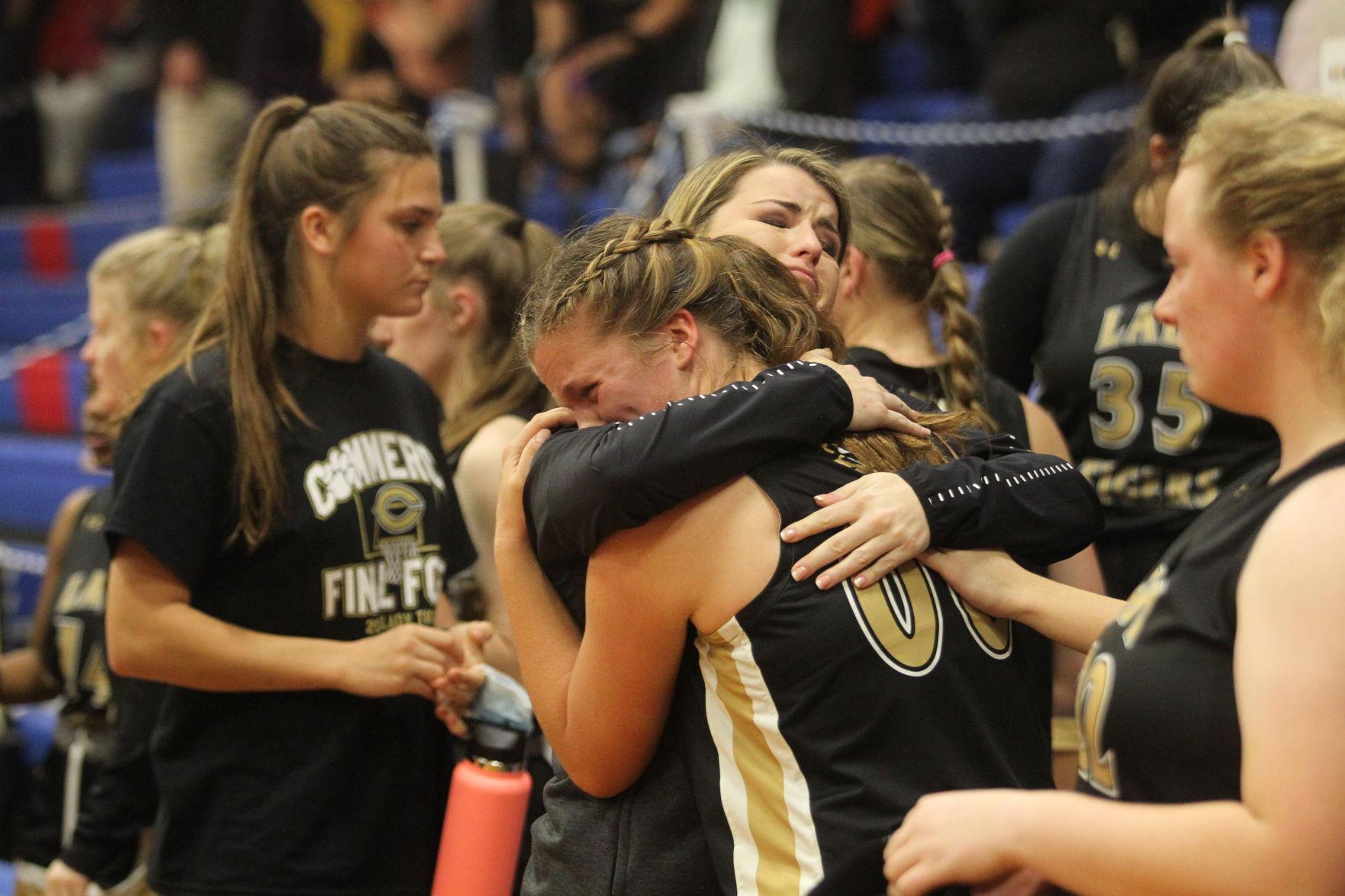 Commerce girls’ assistant basketball coach Hannah McRee consoles Carson Hobbs after the Tigers fell 46-38 on the road at Calhoun County March 5 in the Class A-Public girls’ state semifinals. This was the program’s first trip to the Final Four since 1989.

SK facilities under construction in Commerce.

Tensions over the ITC's ruling that could delay or kill the SK Battery plant in Commerce are ratcheting up as a 60-day deadline looms.

Told by the ITC that it would have to severely limit production of its electric vehicle batteries, SK is reportedly counting on the Biden Administration to overturn the ITC ruling. The president has 60 days in which to decide if he should intervene.

State leaders have been lobbying Biden to overturn the ruling, citing the importance of the plant's projected 2,600 jobs and appealing to the administration's goal of increasing green energy in the nation.

SK Battery was found by the ITC to be guilty of both stealing trade secrets from rival LG Chem and of actively destroying documents in a bid to conceal the theft.

SK has contacts with both Ford and VW to produce batteries for new vehicles.

While some believe Biden is likely to overturn the ITC, pressure is mounting on SK from two fronts.

First, last week the ITC release part of a transcript from its ruling that was scathing in its tone.

According to Reuters, the reported said that the ITC's “investigation demonstrates not merely SK’s eagerness to destroy documents, but also SK’s callous disregard to ascertain the scope of the destruction after the commencement” of ITC proceedings.

The ITC's report was also critical of Ford, which sought to buy even more batteries from SK even after evidence of the theft became known.

The other pressure being put on SK is from a likely lawsuit from LG Chem.

LG Chem has indicated that it would being willing to discuss a settlement, but only if SK acknowledges the theft and apologizes.

According to some reports, LG is suggesting that a settlement would be cheaper for SK than what it will seek in a lawsuit. Moreover, if SK does get the Biden Administration to overturn the ITC's ruling, some reports suggest LG will seek a huge amount in damages from a lawsuit.

According to InsideEVs magazine, "As we understand, if SK Innovation tries to evade the ban through President veto, then LG Energy Solution might have no mercy in the following lawsuit."

The Jefferson Micropolitan Area, which covers most of Jackson County, was ranked Number 2 in the nation for the number of industrial projects in 2020 by Site Selection Magazine.

The ranking puts Jefferson behind Findlay, OH and ahead of Cullman, AL.

Findlay had 22 industrial projects in the year, Jefferson notched 14 and Cullman had 12, according to the magazine.

"It says something about the value of Jackson County, Georgia — home to No. 2 Top Micro Jefferson — that two of Amazon’s seven Georgia fulfillment centers are located there," said the magazine. "But they’re just the prow of the ship in a region along I-85 just northeast of Atlanta that is fast growing into a fulfilling destination all its own."

The high ranking reflects the area's growth in industrial projects, such as SK Battery, as well as new warehouses and expansions, the magazine said.

The magazine had previously ranked the Jefferson Micropolitan Area as the second-fastest growing in the nation for 2016-2017.

News
Commerce teachers to get raise next year

Commerce teachers will be getting a raise next year following action by the Commerce Board of Education on March 8.

The board approved raising the local supplement — money paid to teachers out of local funding and not state dollars — from 3% to 6% of base salaries.

The move begins to bring the system closer to local supplements paid by other area systems. The Jefferson City School Systems pay a 9% supplement and Jackson County pays a 10% local supplement.

The move is for certified and classified employees and will cost the system around $429,000 per year.

Board member Kyle Moore said the current supplement of 3% was "embarrassingly low" and noted that he thought local coaching supplements were too low as well.

In other action, the board tabled action on raising the out-of-district tuition fee from $150 per student per year to $300 per student with a $900 cap for a family. The move would stay at that level for three years.

That amount remains on the low end of the scale when compared with what other city school systems across the state charge, according to data compiled by superintendent Joy Tolbert. Nearby, the Jefferson school systems charges an out-of-district tuition of $1,000 per student.

The BOE also approved a plan for spending federal funding coming from the CARES 2 act. The plan will now be submitted to the state for approval.

Among the highlights of the plan will be to hire four iReady teachers for Commerce Middle School.

Leaders plan to reorganize the instructional program at CMS next year and these teachers are part of that larger plan.

Jackson County's rate of Covid vaccinations remains low compared to much of the state, but that could begin to change this week as local school systems gear up to vaccinate their staffs.

The Commerce City School System will vaccinate teachers and staff members in-house on March 11-12. Pharmacist Becca Brown will be doing the vaccinations at the schools.

The county is currently giving around 1,000 shots per week, a rate that will have to increase to have most people vaccinated by the end of May, a goal that has been set by the Biden Administration.

Meanwhile, the rate of new Covid infections has seemingly plateaued after seeing a dramatic fall from a high on Jan. 11.

After hitting lower rate of 13.7 in late February, the county's new infections have risen to a 7-day average of 16.7 cases per day.

A total of 124 people in the county have died from Covid with 11 other deaths suspected to be from the virus.

Some 463 people have been hospitalized with Covid since the pandemic began last year.

Only a small number of people had voted so far during early voting on the March 16 education sales tax referendum.

At the end of the second week of early voting, only 334 people had voted in-person and only four had voted by mail.

The ESPLOST referendum has to pass in all three school districts in the county — Jackson, Jefferson and Commerce. It is a renewal of an existing sales tax that is used for capital projects, such as school facilities.

Early voting is being held at the county election office at 441 Gordon St., Jefferson, from 8 a.m. to 5 p.m. through Friday, March 12.

Absentee by mail ballots are available upon request. The request form can be mailed, faxed to 706-367-1193, or emailed to jelogan@jacksoncountygov.com.

Election day voting on March 16 will be held in the county's four precinct locations and in Jefferson and Commerce.

The county locations are:

The Church at Southside