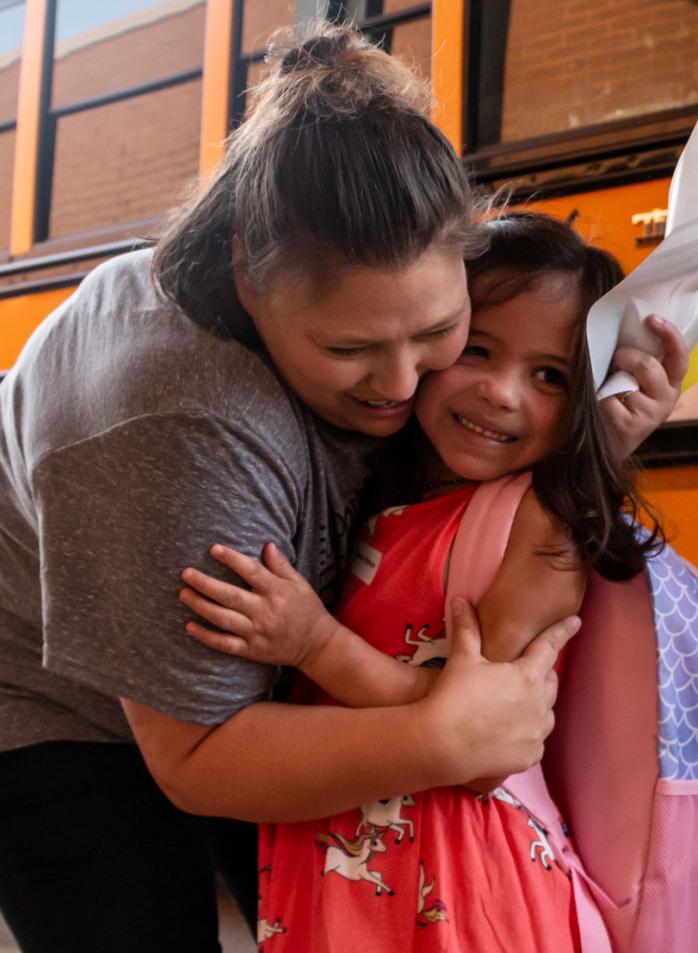 Tricia Chitwood, special needs teacher, gave out hugs and name tags as Banks County Primary School students got off the busses and headed to their first day of class on Friday, August 6.

Elections to be held Nov. 2

Qualifying will be held next week for town elections that are set for Nov. 2. Seats on city councils will be on the ballot in Homer, Lula, Gillsville, Alto, Baldwin and Maysville.

In Homer, the mayor’s seat and all five council seats will be on the ballot. The mayor’s seat is for a four-year term and is currently held by Doug Cheek.

The City of Lula has three slots up for grabs in the November election. Current Mayor Jim Grier is up for re-election.

Three seats are up for grabs in Gillsville, including: Mayor Roy Turpin, and council seats now held by Jeff Perry and Larry Poole.

Qualifying will be held Monday, August 16, through Wednesday, Aug. 18,

Also on the ballot in Alto will be a vote on whether to allow package sales of distilled spirits in the town.

If you are not registered to vote, the last day to do so is Monday, Oct. 4.

The Banks County Board of Commissioners approved a 7.831 millage rate when it met Tuesday, Aug. 10, which is the lowest it has been in 20 years.

"We are rolling the millage rate back to what it was 20 years ago," BOC chairman Charles Turk said. "All of the commissioners did a good job. All of the department heads did not spend all of the money in their budget and we put the extra in reserves."

Turk said he has been asked how the commissioners were able to lower the millage rate and he replies two reasons, "department heads who are conservative" and revenue from special purpose local option sales tax (SPLOST).

"With SPLOST, a large amount of money comes from people who don't even live in this county," he said.

Commissioner Sammy Reece said, "I appreciate all the department heads working on this. There has not been a tax increase on the county side in 12 years."

Commissioner Keith Gardiner added, "Our department heads try to save money whenever they can."

Commissioner Danny Maxwell said, 'If we didn't have that SPLOST money coming in, our taxes would be so high."

Commissioner Bo Garrison added that he appreciates "everyone working diligently" to keep the millage rate low "without cutting any services for our citizens."

Deputies with the Banks County Sheriff’s Office received a 911 call at 9:38 a.m. regarding an "intentional shooting." Upon deputies’ arrival, they located Wood, who was deceased from a gunshot wound. Wood, a rural postal worker, was working his morning route when he was fatally shot.

While patrolling the area of Hwy. 51 North and Bennett Road, the vehicle of interest was encountered by deputies. Deputies attempted to perform a traffic stop on the vehicle and the driver of the vehicle fled from deputies.

A vehicle chase began and ended in Grogan leaving the roadway along GA Highway 51, near its intersection with Payne Road.  Grogan got out of the vehicle and fired a rifle at two deputies.  The two deputies returned fire, injuring Grogan. He was taken to a local area hospital for treatment.  The two deputies were not injured.

There are several charges pending against Grogan.

The Georgia Bureau of Investigation was requested to investigate the officer involved-shooting, as is standard procedure, Bailes said. Deputies involved will be placed on administrative leave, pending the investigation.

The GBI will conduct a complete and thorough investigation and provide it to the Piedmont Judicial Circuit District Attorney for review.

This is the 59th officer involved shooting the GBI has been requested to investigate in 2021.

A veterinary clinic will locate in Banks County following action of the board of commissioners Tuesday night.

The BOC approved a request from Stewart Smith to rezone 9 acres at Hwy. 441 and Webbs Creek Road from Agricultural Rural Residential (ARR) to Commercial (C-2) for the veterinary clinic.

Jason Phillips spoke on the request and said the vet clinic would be a general small animal clinic and would also offer inside animal boarding.

In other business at the meeting on Aug. 10, the BOC:

•approved a request from Robert Evans to rezone his property at 137 Beulah Lane from commercial (C1) to Agricultural Rural, Residential (ARR). The planning commission had also recommended approval of this request.

•denied a request from Hua Yang for a conditional use permit to operate a massage therapy practice at Elegant Massage at 309 Steven B. Tanger Boulevard. BOC chairman Charles Turk questioned who owns the property, pointing out that the name on the applicant, Skyline 7, is who the property is rented from and is not the owner. The planning commission had requested approval of this request.

•approved a request from James Patrick Barber for a beer and wine consumption license for Cracker Barrel at Banks Crossing. He said Georgia is the last state that has not approved alcohol licenses for Cracker Barrel stores. He said the company made the move at the requests of its customers.

•approved a request to purchase 10 sets of firefighter turnout gear for the fire department from Bennett Fire at a cost of $33,280. Fire chief Steve Nichols said there have been several new volunteers join the department.

•extended the moratorium on subdivisions, which was set to expire on Aug. 10, through Nov. 9 so that the update of the ordinance can be completed. The BOC has held several work sessions to go over the ordinance line-by-line to make changes.

•approved a request to purchase 11 vehicles for the sheriff’s office with the money to come from the capital fund. There was a discussion on reimbursing the capital fund with revenue from the special purpose local option sales tax, if this referendum passes in November. Shawn Wilson made this request on behalf of the sheriff's office.

•approved a lease agreement for the Boy Scouts to use Uchee Lodge.

There will be a special rate of $14.50 for a one-year subscription to the Banks County News in August. The regular subscription price is $45 per year.

The special rate in August can be used to purchase a three-year subscription for a rate of $43.50.

With your subscription to the print edition of the newspaper, you also get free access to the online edition at www.banksnewstoday.com.

To subscribe, mail a check to The Banks County News, along with your name and address to: MainStreet Newspapers, P.O. Box 908, Jefferson, Ga., 30549.

Plates will be available to pick-up at the fire department during the annual downtown festival in Homer.

Forty-eight new cases of COVID-19 have been reported in Banks County since last week, according to data from the Georgia Department of Public Health.

There has been a total of 1,779 COVID-19 cases reported since data first began being collected on the virus on March 2020.

There have been 39 deaths and 218 people hospitalized from COVID-19 in Banks County.