Bradley Hill has been named Hoschton’s chief of police. The move will take effect Aug. 2 upon the official reactivation of the city’s police department.

The Hoschton City Council approved the move at a special called meeting June 29.

During a separate special called meeting July 1, the council approved the purchase of a silver 2021 Dodge Durango for $34,779 to serve as its first patrol vehicle and approved Hill’s annual salary at $75,000 as police chief.

Hill began his career in community service as a volunteer at the West Jackson Fire Department (WJFD) shortly after graduating from Jackson County Comprehensive High School in 2000. While volunteering at WJFD, he held the rank of rescue chief and lieutenant and was offered a job as a detention officer at the Jackson County Sheriff’s Office (JCSO).

In 2004, he was promoted to deputy sheriff and was again promoted in 2008 to patrol corporal. In 2012, he was named patrol sergeant and later became patrol lieutenant in 2015. He received his most recent promotion in 2017 as an investigator, which is his current position at JCSO.

“I took an interest in it at 19 years old and here I am 20 years later still working at the sheriff’s office. It's a great place to work,” he said.

Throughout his tenure at JCSO, Hill has logged over 1,900 training hours and has received specialized training in laser and radar operation. Hill is a certified law enforcement instructor and firearms instructor and has completed all three levels of supervision provided at the Georgia Public Safety Training Center.

“I want to lead a community-oriented police department so the citizens look forward to dealing with us and come to us in a time of need,” he said.

Depending on the community’s needs moving forward, the city plans to add at least one officer and patrol vehicle every six months to a year.

● approved MHM Construction’s bid for sidewalk repairs throughout The Village at Hoschton community. The approved bid will cost the city $18,144.

● tabled selecting bids for roof repairs at 153 Mulberry Road, a property the city recently purchased. The council will make its division on the matter during its regular council meeting July 19. 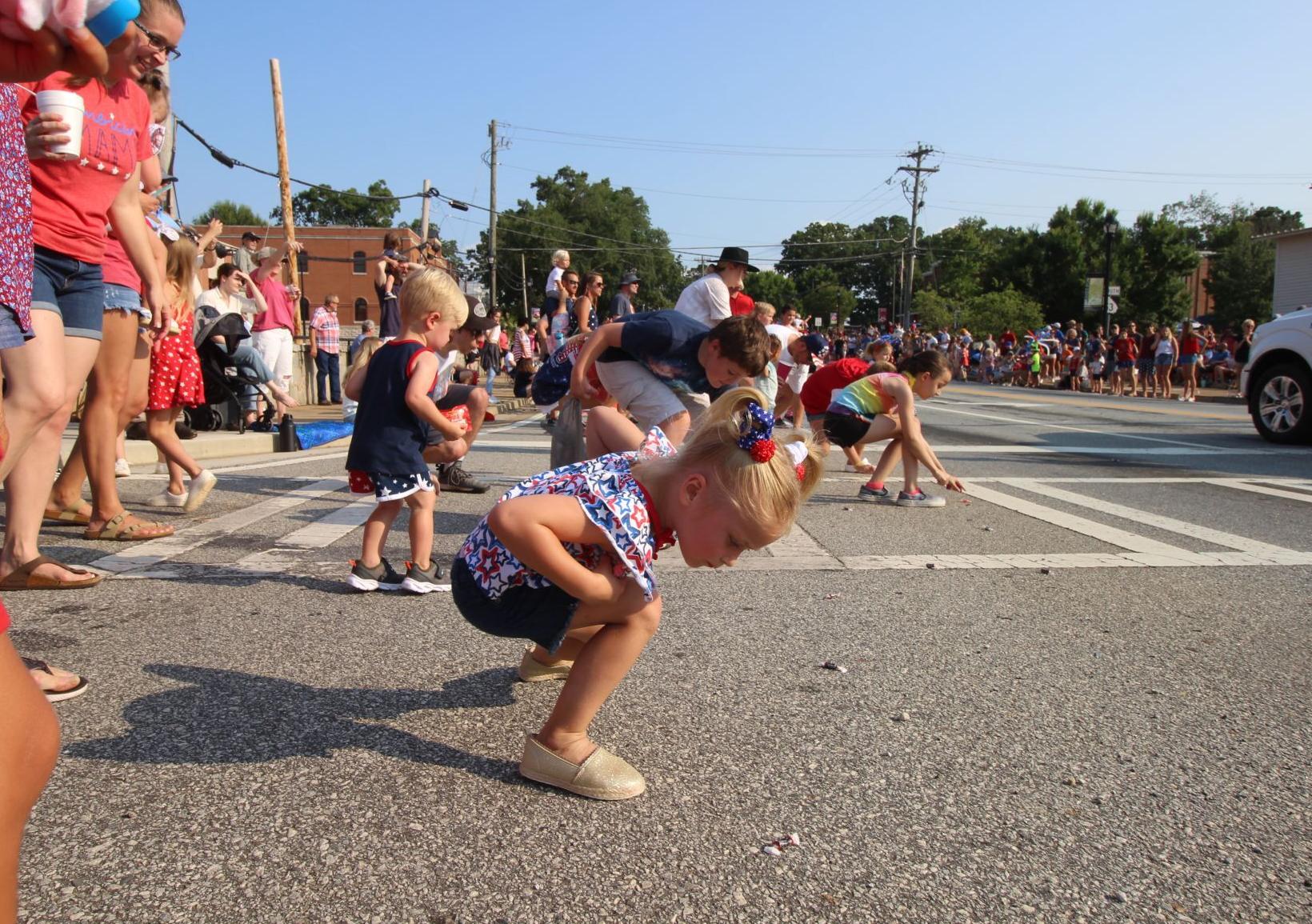 Youngsters picked up candy that was thrown out during Braselton's Fourth of July parade. 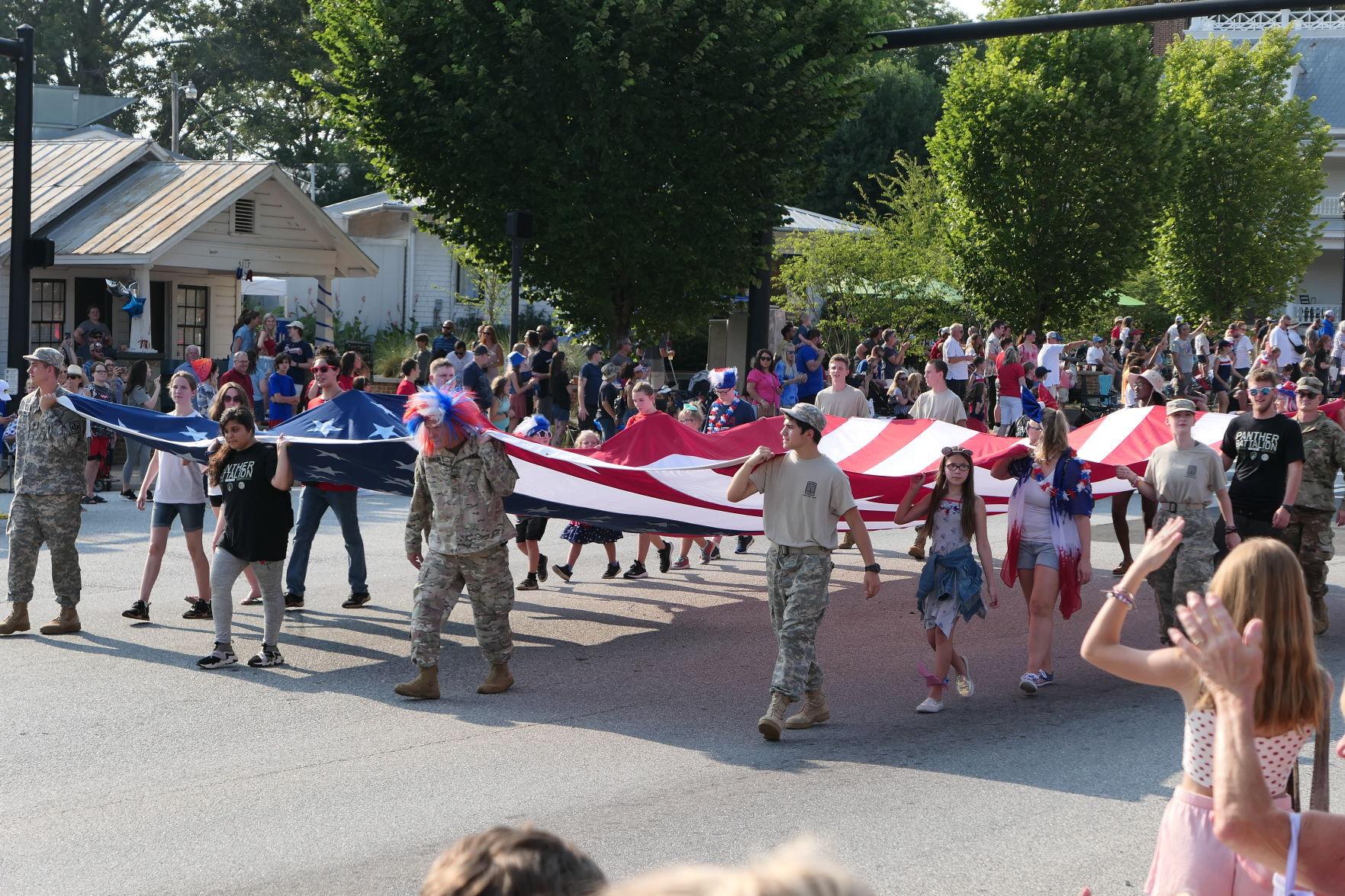 Braselton held its annual Fourth of July parade on Sunday.

An archeological greenspace park, a new administrative building and buying the remainder of the Gordon Street Center were among the topics discussed during a day-long meeting of the Jackson County Board of Commissioners last week.

Although the board took no votes on any of the various subjects it discussed, there was a consensus for county manager Kevin Poe to pursue purchasing land for an archeological park that has rock mounds reportedly created by Native Americans. The county had previously discussed the proposed park and negotiated terms with landowners for the project.

The BOC also had a consensus for Poe to negotiate with the Jackson County Board of Education to purchase the remainder of the Gordon Street Center for the purpose of expanding the county elections offices. The county currently owns part of the facility and uses that for its recreation offices. The BOE has used the remainder of the facility for some of its administrative and IT offices.

The board also discussed continuing the county's SPLOST beyond 2023 with a SPLOST 7 referendum in November 2022.

Some of the proposed uses of the SPLOST funds would be for a new 35,000 sq. ft. county administrative building to be built on county property near the courthouse, a renovation of the county jail, and additional funding for county roads, bridges, recreation, public safety and airport upgrades.

Among other items discussed by the BOC were:

• upgrading and realigning the intersection of Skelton Rd. at Hwy. 332, a project the county hopes to complete by the start of the 2022 school year.

• expanding the county solid waste transfer station, a project that would cost around $2 million. The amount of trash being handled by the current facility has grown in recent years. The facility set a new monthly record in March of handling over 7,191 tons of trash.

• buying a quick response vehicle for EMS use.

• an update on a plan to expand the county animal shelter. Bids for the project came in high, so officials are now looking to do the project in phases. This year, the county wants to fix some maintenance problems at the facility that have drawn violation notices from the state.

• a planned expansion of the county Senior Center.

• considering a parking fee for those using Hurricane Shoals Park. Poe reported that the park had record crowds this year.

• the potential use of federal rescue funds to help pay for the county's new public safety radio system.

• the future of the county's transit system and if that system  should continue to accept some state funding with its strings attached, be locally funded or discontinued.

Hwy. 332 between Pendergrass and the Braselton area was slated to reopen early this week.

The Georgia Department of Transportation announced it had completed work on replacing two bridges on Hwy. 332, a situation that had the road closed for detours in recent months.

The corridor is a key link from the North Jackson Area to West Jackson, especially with the impending opening of the new Jackson County High School located off of Hwy. 332 on Skelton Rd.

Ben Munro will be taking the helm as editor of The Braselton News starting Aug. 1.

Munro has been the long-time sports editor of The Herald where he has won numerous awards for his writing and photography. Both the Braselton News and The Jackson Herald are part of Mainstreet Newspapers headquartered in Jefferson.

Munro is married to Dr. Jessica Griffin, who owns and operates Magnolia Veterinary Hospital in Hoschton. They live with their two children in Dacula.

Tickets are $50 per person and include souvenir wine glass, shopping bag and map of the sipping station locations.

"At each sipping station, businesses will welcome walkers with a different wine sample paired perfectly with a fabulous food bite – some provided by Braselton’s finest restaurants," town leaders said. "Walkers completing the walk, will be entered into a gift certificate drawing."

Walkers must be 21 years old and will need to show identification.

The walk is approximately 1.5 miles.

Buy your tickets at https://visitbraseltoncom.ticketleap.com/downtown-braselton-wine-walk/

A short survey can be found at https://www.surveymonkey.com/r/5XWJKVT.

"After you take it, please share with your family and friends and neighbors," town leaders said.

The Georgia Court of Appeals has upheld a key part of a lawsuit filed by a group of homeowners against WS CE Resort Owner, a part of Wheelock Street Capital which owns Chateau Elan.

The court upheld a lower court ruling that said homeowners in the Manor Homes of Chateau Elan had an "implied easement" to a neighboring Par 3 golf course. The appeals court did, however, overturn the lower court on the awarding of attorney's fees to the plaintiffs.

The issue began in 2019 when the company went before the Braselton Town Council to get a rezoning to convert its Par 3 golf course into residential townhomes, saying the golf course was losing money.

But several homeowners living in The Manor Homes of Chateau Elan opposed the move, saying they paid a premium price for their lots because of the view of the golf course.

In June of 2020, Senior Superior Court Judge David Motes ruled in favor of the plaintiffs, Thomas and Connie Holland and Evelyn McCarthy.

Chateau Elan argued that it is losing money on the Par 3 course and wanted to sell that property to develop townhomes.

"We affirm the trial court’s order determining that the Plaintiffs acquired an implied easement in the golf course," said the appeals court.