News
breaking
150-plus students quarantined due to coronavirus concerns over past week; at least three test positive for COVID-19
By Scott Thompson sthompson@barrownewsjournal.com

More than 150 Barrow County School System students were sent home from or kept out of school from Sept. 24-30 due to coronavirus concerns, and more than half of those were at Yargo Elementary School, according to the district’s latest weekly COVID-19 update released Thursday, Oct. 1.

It was not clear Thursday how many of those students had been able to return to their school. The district is not disclosing that information, as officials have noted the amount of time a student has to quarantine varies depending on whether they exhibit symptoms and other factors.

During the same weeklong period from Sept. 24-30, five staff members tested positive for COVID-19, six were quarantined due to a probable case, and 17 were out due to direct contact with someone with a positive or probable case.

The number of students out due to coronavirus-related concerns for the past reporting week (154) was more than double the number from the previous week of Sept. 17-23 (69). The number of impacted staffers dipped slightly from 31 to 28.

School district officials have declined to release further numbers about the student impacts at the schools, citing privacy concerns and multiple factors associated with contact-tracing.

Officials with the Georgia Department of Public Health have said they won’t publicly disclose details about any outbreaks at schools that are being investigated, but have requested that all public schools submit weekly reports. The discretion has been left up to individual school districts to share with their communities the impact of COVID-19 on their facilities and, while the approach has varied widely across the state, Barrow County has gone further than a handful of surrounding districts by disclosing the number of impacted students at each individual school.

The parent of any student who has a positive/probable case or has close contact with either is contacted immediately by the school with a phone call and follow-up letter, according to a district spokesperson. Students not effected are not contacted.

The district began the school year entirely online Aug. 17, transitioned to a hybrid in-person/online model Sept. 8 with each grade split into two cohorts, and then moved to five days a week in the school buildings Sept. 21 as the reported spread of COVID-19 in the community (average of new daily cases per 100,000) has steadily declined to more favorable levels.

About 26 percent of the district’s roughly 14,100 students are participating entirely in distance learning. Students were given the option to transition either at the end of the first nine weeks or the first semester, depending on their grade level.

Even with the improved outlook of late, district officials have braced for the virus to continue to have an impact in the school buildings and have cautioned they may have to move back to a hybrid instructional model or possibly enact temporary closures if the local situation worsens again.

The district has implemented face mask mandates and several other mitigation measures at each of its schools and facilities in an effort to continue providing in-person instruction, and 140 staffers have received contact-tracing training through a Johns Hopkins University program as part of an effort to prevent large outbreaks from occurring. 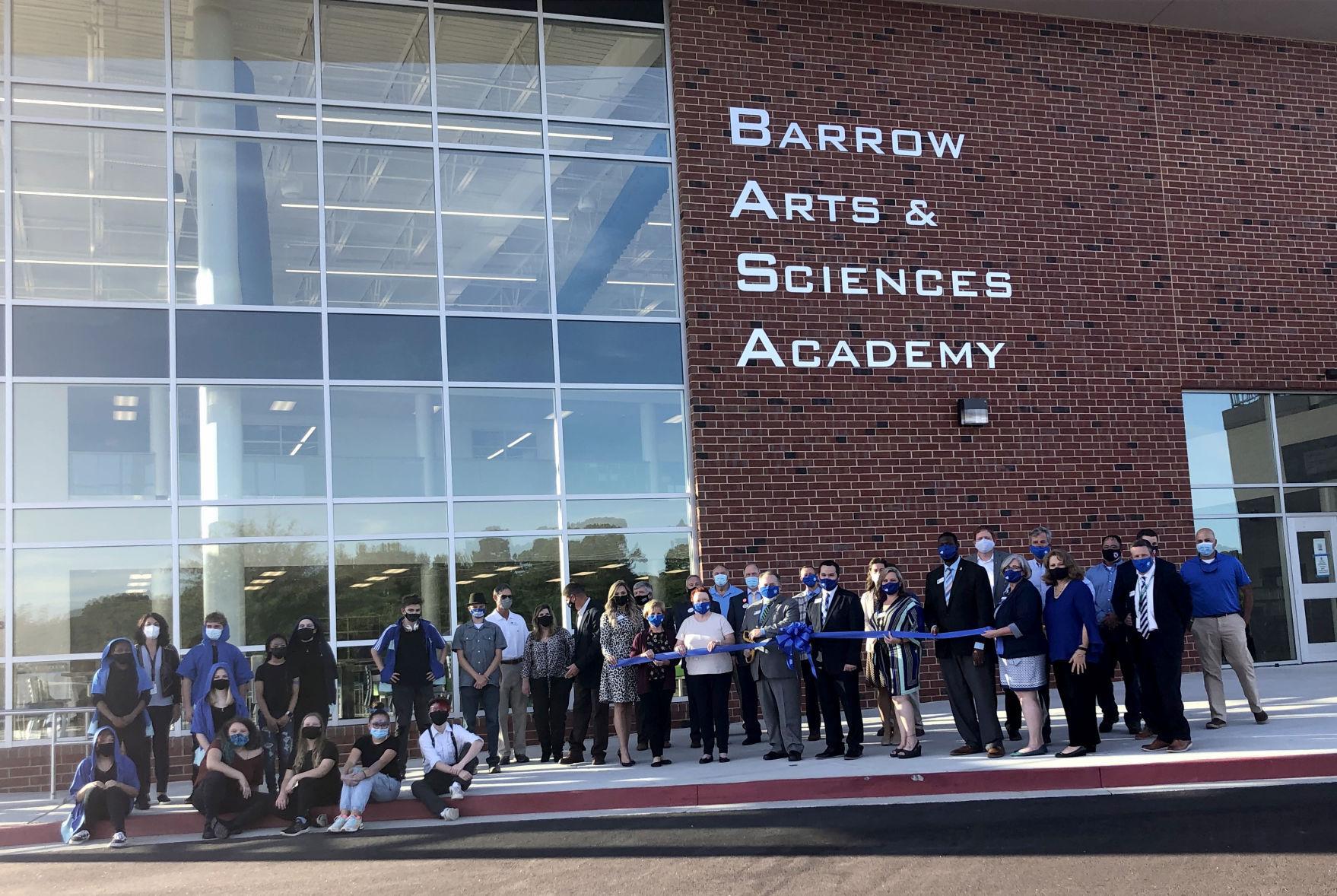 Officials with the Barrow County School System held an official ribbon-cutting ceremony Tuesday, Oct. 6, for the district's third high school, Barrow Arts and Sciences Academy. The school began instruction at the start of the academic year in August, but a ribbon-cutting had been delayed due to coronavirus precautions. Construction of the $18.8 million, 114,000-square-foot facility off Austin Road in Winder next to Sims Academy was led by Charles Black Construction and took two years to complete. It includes a student center, which houses the media center, cafeteria and learning spaces, and the academic building for classrooms and lab spaces. The high school, serving grades 8-10 this year, is a school of choice — meaning that students apply to attend and are admitted based on a lottery, with no pre-requisite requirements for attendance. The 20-minute ceremony Tuesday included remarks by superintendent Chris McMichael, principal Dale Simpson and Joe Perno, assistant superintendent for operations.

A local developer’s plan to build 128 apartment units off West Candler Street across from Rose Hill Cemetery in Winder has been met with strong opposition from nearby residents — less than two years after the property was rezoned to allow for construction of a senior housing development.

The Winder City Council voted Tuesday, Oct. 6, to table a request by LAB P.I. Group to amend the conditioned rezoning of 14.79 acres between Marion, James and Myrtle streets by relieving the applicants of a condition that the apartments be age-restricted (55 and older) and doubling the number of allowed units from 64 to 128, with all the units to be constructed south of the creek on the property.

The council originally approved the rezoning of the property to R-3 in May 2018 at the request of Roswell-based Piedmont Housing Group, which sought to build a 64-unit senior housing complex. But the project, which was to be backed with Georgia Department of Community Affairs housing tax credits, was later abandoned.

LAB P.I.’s request to double the number of allowed units has been met with resistance from residents, and more than dozen have signed an online petition opposed to the high-density housing.

“We strongly oppose and believe the addition of a high-density apartments development will add no value to our surrounding community,” resident Jonathan Tucker said. “We oppose high-density housing in our area and want to prevent the negative consequences (a development) like this will have: it will increase traffic, lower our property values by setting a precedent for high-density housing, increase crime and subsidized housing and overpopulate our school cluster.”

The city’s planning staff also recommended against waiving the condition for the development to be age-restricted.

Under the city’s new comprehensive zoning ordinance and the maximum-allowed density, the developers would be allowed 118 units on the property, according to city staff, so the applicants would have to request a variance in order to be granted all 128.

Applicant Wes VanKirk requested that the council table the request until its November meeting so that he could meet with the residents and try to address their concerns.

“I think it’s only fair we table due to the amount of interest it has received,” councilman Jimmy Terrell said. “Give (the applicant) the opportunity to see what they bring back to the table. I think that’s being fair to all the parties involved.”

•approved a renewal of city’s health and wellness benefits plan with Cigna — keeping the plan and premiums at current levels, with an annual cost to the city of $1.9 million. The council also approved offering a health savings account plan in addition to the HRA plan and will continue to offer a wellness program to employees, but will no longer offer an opt-out option to employees.

•approved a conditional-use variance for applicant Shay Reed to allow for an auto repair/installation shop at 11 Virginia Ave.

•approved a proclamation in support of October as Breast Cancer Awareness Month.

The deadline to register to vote in the election was Monday, Oct. 5.

Applications for absentee ballots are still being accepted, and ballots must be received by the elections office by 7 p.m. Nov. 3 when the polls close.

For election day polling locations, absentee ballot procedures and other information, you can go to barrowga.org/departments/elections-registration-main.aspx or mvp.sos.ga.gov.