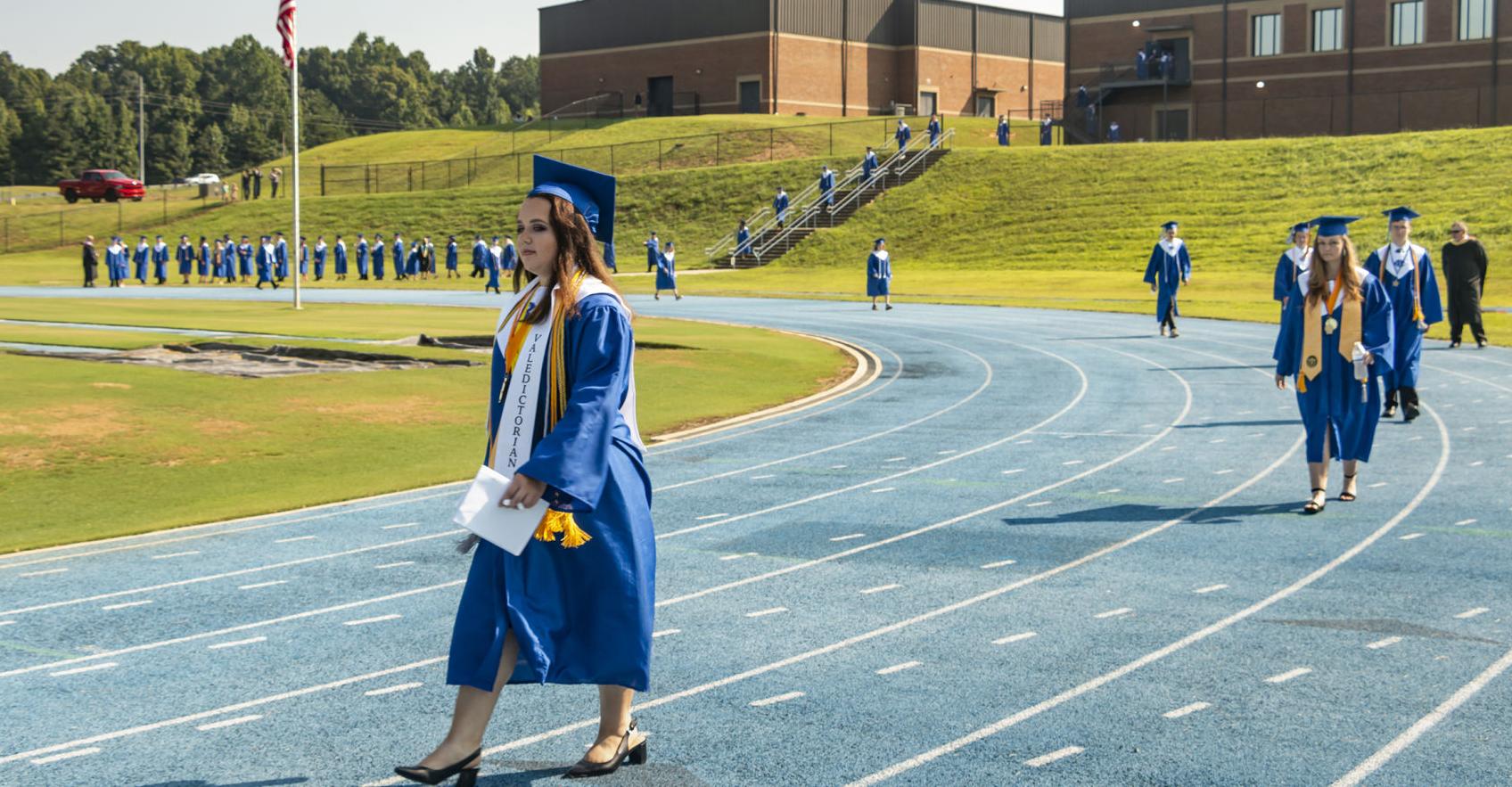 Banks County High School students walked across Leopard Stadium during their graduation ceremony on Saturday, July 18. Here, graduates keep their distance as they graduate during the midst of the coronavirus pandemic.

Developer Bill Griffin presents plans on his subdivision proposal to the Banks County Board of Commissioners.

A request for a rezoning to locate a subdivision on Chambers Road was approved by the Banks County Board of Commissioners at its July 14 meeting.

The BOC approved the request to rezone the 163 acres from ARR (agricultural rural residential) to R-1 (single-family residential) for the subdivision.

The approval was for 75 homes in the subdivision, with an additional 101 homes if the developers get approval for a second entrance.

“I have thought about this and I have read the requirements and I have looked at the plan and talked to people and I don’t see any reason in the zoning, as it is written now, to deny this,” BOC chairman Jimmy Hooper said. “I make the recommendation that we approve this.”

The approval also came with a stipulation that the 101 additional homes be on county sewage.

In presenting the request, developer Bill Griffin said he wants to build homes for local graduates to have a place to stay and live and not have to move away.

Four people spoke in opposition to the project, including Martha Young, who said she is concerned about traffic on the road and the impact on the school system. She asked for an impact statement be done before action is taken.

In other action at the July 14 meeting, the BOC:

•extended the multi-housing moratorium until March 14, 2021. Hooper voted no on this, while commissioners Danny Maxwell, David Duckett, Sammy Reece and Charles Turk voted in favor of this.

•heard from resident Paul Wolf, who spoke on his concerns about gunfire being too close to city limits. Hooper said staff will look into this.

•approved a change order bid of $80,000 to Griffin Brothers for a water line relocation at Hwy. 59 and Segars Road needed due to a roundabout project.

•approved an agreement with NSync Inc. for audio visual services at the Superior Courtroom and Annex Building.

•approved the planned maintenance agreement for the jail with Gainesville Mechanical.

•approved the annual contract with Legacy Link for the nutrition program at the senior citizen’s center.

•agreed to purchase three HVAC units at the jail.

•reappointed Vicki Boling and Danny Maxwell to the GMRC board.

The Homer Town Council amended its alcohol ordinance at its meeting on Tuesday, July 14, to allow for the sale of alcohol on Sunday, following approval of the issue by the majority of the city's residents on the recent referendum.

The ordinance also addresses the other issues approved in the referendum, which include that alcohol can be sold on the premises (as long as 50 percent of the sales are for food) and that package sales are allowed by retailers of both malt beverages and wine on Sundays between the hours of 12:30 p.m. and 11:30 p.m.

The largest increase in the budget comes under the professional fees line item where an additional $15,000 is budgeted. This will be for updating the town’s ordinances.

Also at the July 14 meeting, the city council:

•tabled any action on increasing the water rates.

•heard from a resident about closing a street. The attorney said the dispute would be a private matter between property owners. The city did ask the attorney to respond to an email from one property owner related to the issue.

•learned that GEFA loan payments have been suspended through December of 2020.

•reappointed Fay Reynolds to the code enforcement board.

•discussed only holding a parade for the annual Holiday Festival.

•agreed for city hall to remain closed to the public.

Banks County Board of Commission chairman Jimmy Hooper (left) announces his resignation at the July 14 board meeting.

Banks County Board of Commission chairman Jimmy Hooper announced at the July 14 meeting that he will be stepping down as of Aug. 31 due to medical reasons.

Hooper said that he has had two back surgeries in the past year and has found out he will need additional surgeries. He said he chose Aug. 31 as the date to resign because commissioner Charles Turk, who represents District 4, has already been elected as chairman and can step in to serve. Hooper pointed out that the District 4 seat replacement will have been determined in the Aug. 11 run-off.

"It’s been a good eight years," Hooper said. "It has been my pleasure to serve."

One local race will be on the run-off ballot — the District 4 seat on the Banks County Board of Commissioners. In that race, Keith Gardiner and William Reems will be on the ballot.

Early voting will be held from 8 a.m. to 5 p.m. Mondays through Fridays at the Elections Office, located at 226 Candler Street, Homer.

There will be two other run-off races on the Aug. 11 ballot:

•In the crowded Republican District 9 race for Congress, Matt Gurtler is headed for a runoff with Andrew Clyde. The winner will face the winner of a Democratic runoff between Brooke Siskin and Devin Pandy.

•In the contest for State Senate District 50, there will be a runoff between Bo Hatchett and Stacey Hall for the Republican nomination. The winner will face Democrat Dee Delany in the November General Election.