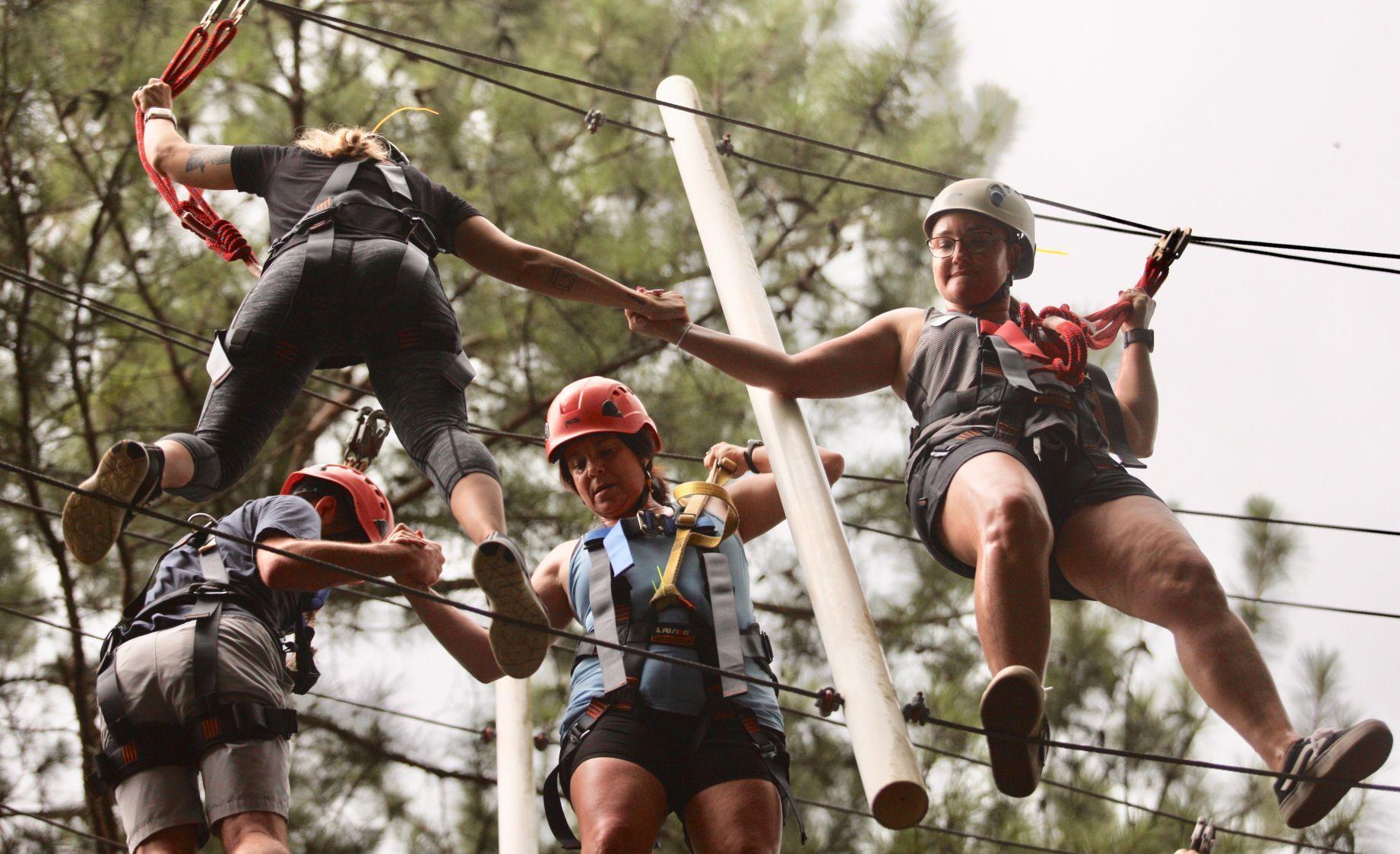 Leadership Barrow's Class of 2023 has its first outing Wednesday, Aug. 10 at Camp Twin Lakes, where the group was given several team-building challenges, including a ropes course.

The inner-child within each member of Leadership Barrow’s Class of 2023 was brought out during the group’s first session at Camp Twin Lakes Wednesday, Aug. 10, where the day was filled with team-building challenges and risk-taking fun.

“It truly felt like being dropped off for the first day of school,” said class member Aimee Kiebler.

“Everyone seemed excited and a some were even nervous,” she said.

Class of 2023 lead facilitator Ben McDaniel and assistant facilitator Shenley Rountree led the group in discussions on Emergenetics, which is a profile assessment that dives into the thought processes of each individual and how those processes effect behaviors.

“It was so enlightening to dive deeper into the way you think and how that reflects in your behavior. Learning about yourself and seeing where others fall on that spectrum too will help the group work better together,” said Kiebler.

The group heard from Tricia Massey from Piedmont Athens Regional, the sponsor of Leadership Barrow 2023, before beginning its first “get to know you” game.

“The first day is all about learning about the program, yourself and your classmates,” said program coordinator Christine Greeson.

Also during its first session, class presidents, Facebook fans and storyteller were selected.

“I volunteered to serve as a co-president for the Leadership Barrow class because in a group full of amazing leaders, I believe I can provide a facilitative style of leadership that ensures all voices are being heard while still moving forward towards our goals,” said Ward.

According to Spaulding, “I volunteered because it offers me an opportunity to give back or make a difference to the people around me. I like the quote by Winston Churchill, ‘We make a living by what we get, but we make a life by what we give’.”

“I am a social butterfly and love connecting with people. I want to tell my community how great the Leadership Barrow Class of 2023 is,” said Martinelli.

“I volunteered for Facebook fan because I love being able to share a story or experience with others. Being able to engage with our community via our social media platforms will share the word about this wonderful program and how others can get involved,” said Shumate.

The Camp Twin Lakes staff provided the group with lunch before they set out to take on the high ropes course.

“For the first day, it was amazing to watch teams encourage each other and be cheerleaders for those they may not have even met before today,” said Kiebler.

“ Bonds were made and cemented today that will last a lifetime. Everyone left with a little more than what they started with, maybe not energy, but knowledge about themselves or someone else in the class.

“It was a truly wonderful first session and the class is eagerly anticipating the rest of the year together. This class is going to do great things,” she said.

A panel of arbitrators ruled in Barrow County's favor during an annexation dispute arbitration with the City of Winder Aug. 9 after it heard witnesses, gathered information and reviewed the facts and evidence surrounding a proposed residential development on Pearl Pentecost Road along the West Winder Bypass.

The Barrow County Board of Commissioners (BOC) "vigorously" opposed the request to annex due to issues concerning land use, density, traffic and infrastructure in the surrounding area.

Although the county cited several concerns with the proposal, its primary objection centers around its goal of keeping the property fronting the West Winder Bypass from a "residential intrusion" as it was planned for commercial and industrial growth in the county. As such, the proposed subdivision, the county argued, is inconsistent with the county's Future Land Use Map (FLUM) and comprehensive plan.

According to the county's objection letter to the city, the proposal would "substantially undermine Barrow County’s investment and planning for property along the West Winder Bypass to support the county’s tax base as a commercial corridor."

Motions to dismiss were filed by attorneys representing the city and developer asking the panel to first determine whether the county's objection was proper, arguing the county failed to prove a material increase in burden.

"We have no idea how we're supposed to negotiate and get paid for mitigating issues because we don’t know what their burden that they're claiming is," he said, adding that the county must show that the increased density is a material burden on the county.

"It can still be annexed, and in fact, the conditions that you would impose would only be good for one year. So at the end of that one year period, the conditions expire and the developer and the city are free to move forward as they see fit."

Angela Davis, Barrow County attorney, pointed out that the arbitration process is the only mechanism to protect the county's planning, infrastructure and pocketbook.

"It's interesting that the city and developer go to great lengths to try to block the panel from hearing our case today," Davis said.

"I see somewhat of a bullying scare tactic to suggest to you that if you proceed today you're going to violate the Georgia Constitution. You should not give that a second thought."

Davis told the panel the "hyper-technical nature" the city and developer used to make their arguments the county's objection letter didn't state its case for material burden were "offensive" and "outrageous."

Davis argued the city and developer's "fixation on blindly only acknowledging what's in the first section of the five-page objection letter was "curious" and "just wrong."

"They have blinders on to the totality of the objection letter and argue that some magic word 'material increase in burden' must appear somewhere and it should appear in part one," she said.

"That’s certainly not what the law is. Not a reason that the county should lose its opportunity to proceed before you today."

Davis continued to express the county's concerns with the annexation, namely, the front portion of the property that's along the West Winder Bypass, which Davis described as the "economic development engines of the county" and is how the county attracts business and industry for the future of Barrow County.

"All the county wants is to develop the front piece as commercial or industrial, the back piece they can do what they want," said Davis.

Davis also mentioned infrastructure demands that suggest a need be need for improvements as the two exit opportunities from the property is "incredibly dangerous."

Ultimately the arbitrators denied the city and developer's motions to dismiss and eventually ruled in favor of the county and its objection to the annexation. 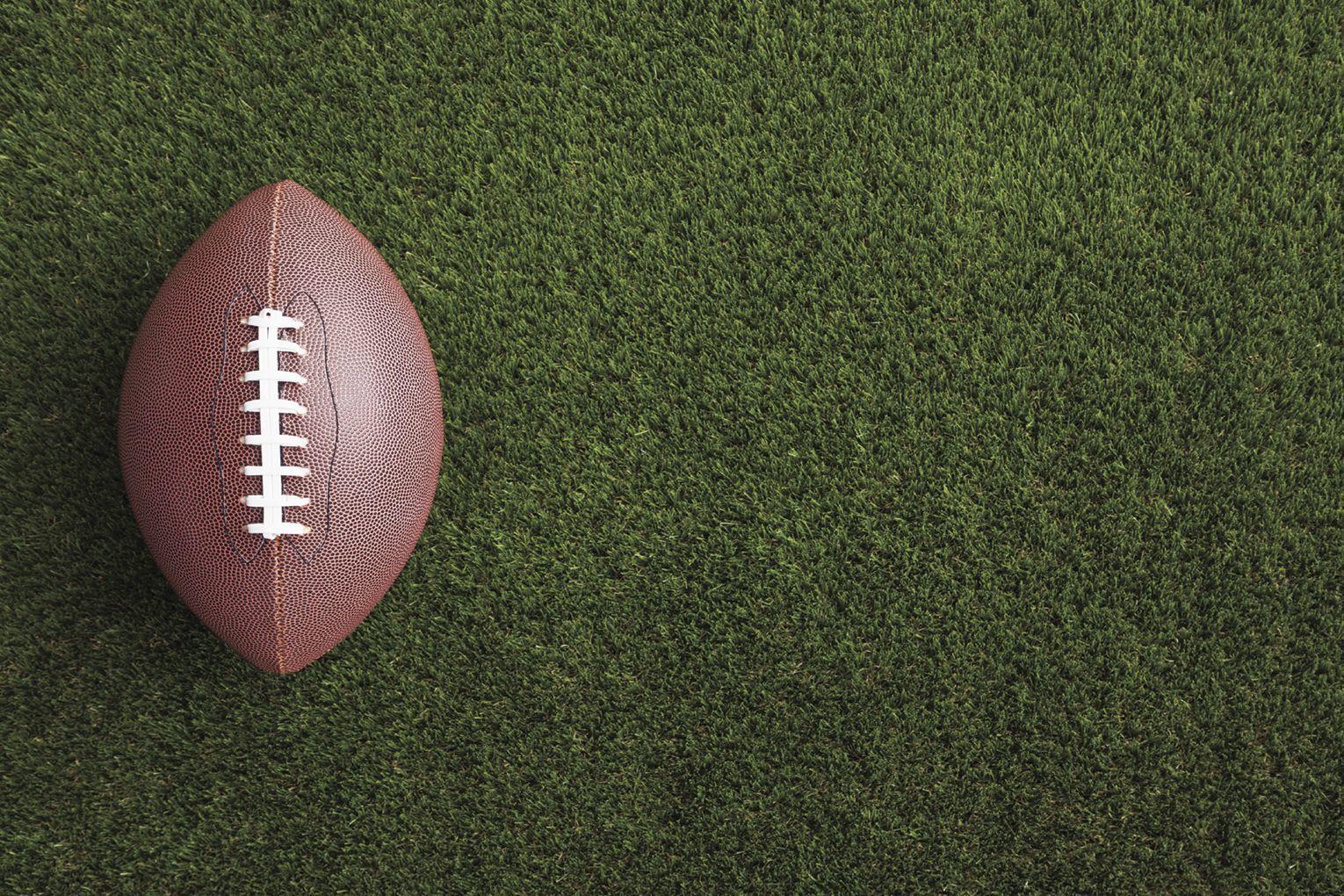 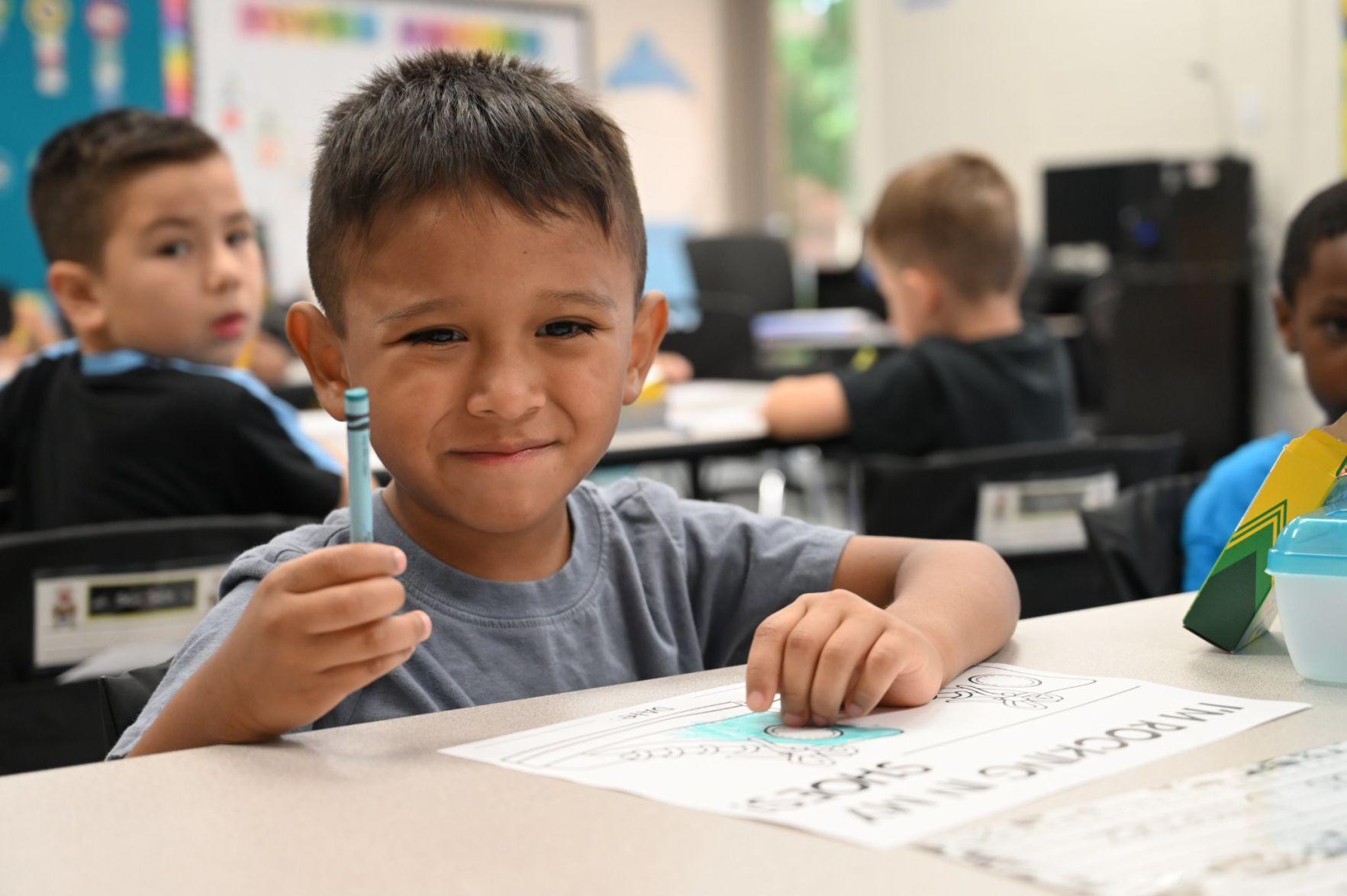 According to Barrow County School System's 11-day enrollment count released this week, the district experienced a 3% increase in student enrollment over the last year.

The first day of school attendance count was 13,915, which was the number of students physically present in school that day and didn’t include all students listed on rolls.

The district's student enrollment numbers have been steadily rising year-to-year since 2016, with the exception of 2020 to 2021, however, this year's 428-student increase is the largest jump in enrollment since 2018, with the largest increases seen at the elementary school level.

“We are hitting on the high end of our growth projections, but are still within those projections," said BCSS Superintendent Dr. Chris McMichael.

" School systems are always challenged with balancing new growth with current funding. Our team does a phenomenal job of maximizing taxpayer dollars to enhance our services while managing our growth each year," he said.

In total, 6,916 elementary school students were reported on roll and has been physically in the building at least once in the first 10 days of school, which is a roughly 3.9% increase over the last year.

Elementary schools with noteworthy increases from last year include:

• Holsenbeck Elementary, which reported 830 students enrolled so far this year, which is an increase of 113 students, or just over 15%, since 2021.

• Auburn Elementary, which reported 758 students so far this year, which is an increase of 52 students, or roughly 7%.

• Winder Elementary, which reported 642 students, which is up roughly 5% from the 607 students reported at the same time last year.

The only middle school that experienced growth over the last year is Bear Creek Middle, which reported 660 students this year, which is an increase of 37 students since 2021, or 5.9%.

Haymon Morris Middle School reported 799 students, which is a decrease of only four students since 2021.

Russell Middle School reported 908 students, which is the exact same number it reported at the same time last year.

Barrow Arts and Sciences Academy's (BASA) eighth grade reported 212 students, which is a decrease from last year of 23 students, or 9.8%.

The number of seventh and eighth graders enrolled in Barrow Online Campus (BOC) was reported at just 10 students, which is down from last year's 26 students, or roughly 61%.

In total, 3,312 middle school students are currently enrolled across the district so far this year.

BASA's high school student population increased from 605 students in 2021 to 852 this year, an increase of just over 40%. BASA added its 12th grade cohort this school year, which is indicated in its continued rise in student enrollment. This year will be the first year BASA will have a graduating class.

BOC high school student enrollment declined from 50 to 15 over the last year, a decrease of 70%, indicating more students are opting to learn in-person this school year.

The Innovation Amphitheater has planned for another weekend packed full with live music.

On Saturday, Aug. 20, Doug Stone and Georgia's own T. Graham Brown will be performing country, gospel and blues with top hits like "Hell and High Water," "I Tell It Like It Used to Be," and "Darlene."