News
Local schools to get over $13 million from stimulus funding

Jackson County's three school systems will get a total of $13.6 million in funding from the recently signed federal American Rescue Plan.

The funds are part of the $1.9 trillion spending designed for Covid relief and economic stimulus.

Among other items, the funds may be used for:

• Implementing strategies to meet the social, emotional, mental health, and academic needs of students hit hardest by the pandemic, including through evidence-based interventions and critical services like community schools.

• Hiring additional school personnel, such as nurses and custodial staff, to keep schools safe and healthy.

• Providing for social distancing and safety protocols on buses.

• Funding for Wi-Fi hotspots and devices for students without connectivity for remote learning and supporting educators in the effective use of technology.

"This pandemic has taken an extraordinary toll on students, parents, educators, and schools, and we know that our schools, students, and communities need help now to reopen safely and quickly, and to stay open," said Secretary of Education Miguel Cardona. "These funds from the American Rescue Plan and the extraordinary steps the Department is taking to get these resources to states quickly will allow schools to invest in mitigation strategies to get students back in the classroom and stay there, and address the many impacts this pandemic has had on students—especially those disproportionately impacted by the pandemic."

The Commerce City Council discussed a proposal to increase the trash pickup fee per customer by $0.84 at its April 5 work session.

Waste Pro, the town’s sanitation service contractor, noted in a letter to the city that the “cost of doing business” has increased significantly in the last year.

Waste Pro said the consumer price index has increased by 1.4%. That contributes to $0.14 cents of the overall proposed increase. The remaining $0.70 increase comes from hikes in disposal costs.

City manager James Wascher said the increase could go into effect in May.

The council also had a lengthy discussion with Waste Pro representatives about issues with recycling. Council members discussed issues with rejected recycling loads that have to be diverted to a landfill because a customer placed non-recyclables in their recycling bin, contaminating the load.

A number of solutions were discussed, including providing information to customers on what can and can’t be recycled or limiting what items can be placed in the bins.

Other business discussed at the April 5 work session that could be voted on at the council’s next meeting were:

•a conditional use request from Mack Garrison for 219 Allen Rd. The request would allow a towing lot on 2.17 acres. (The property was previously approved for a recycling facility, but that project was abandoned.) Representatives for the project said at the recent planning commission meeting that they’d probably have a maximum of 25-30 vehicles on the site at any point and cars would be moved out every 30 days.

•an amendment to a contract with Bureau Veritas for residential inspections and erosion/sediment control inspections.

•amendments to the Georgia Municipal Association’s 401(a) defined contribution plan.

•a request for the sale of beer and wine at 614 South Broad St.

The council also held a 30-minute closed session on real estate and litigation with no action following.

Local option sales taxes in Jackson County for the first two months of 2021 are running significantly higher than they have in the past for the same period.

A new county park is in the works for the West Jackson area.

The Jackson County Board of Commissioners agreed April 5 to buy 65 acres off of Pocket Rd. for a "passive" greenspace park.

The property is owned by Sidney and Victor Tanner. The county agreed to pay $700,000 for the property.

In other business, the BOC:

• heard a report that by April 2022, all trash being hauled to the county transfer staton must be under a tarp. The county has hired an off-duty deputy to begin working "trash enforcement" in the county and to cite those who allow litter to blow off of trucks and trailers hauling trash.

• discussed a list of additional roads to be paved in 2021. A final list will be presented to the board at its April 19 meeting.

• discussed updating the county's GDOT speed zone ordinance to reflect the use of speed cameras around schools in the City of Jefferson.

• agreed to appoint Brenda J. Smith to the Northeast Georgia Area agency on Aging for a two-year term.

News
Jefferson man to hike AT for PTSD awareness

At Amicalola Falls State Park, Alex Clarke walked from the archway to a lodge and scaled the stairs. Inside the room he’ll be staying in for no more than two days, he spent time stretching and reorganizing the supplies in his bag, preparing to embark on the 2,190-mile hike up the Appalachian Trail: A long and sometimes rugged stretch of land spanning from Georgia to Maine.

The path that led him here has been unthinkably more trying than the trail he plans to walk for the next six months.

Clarke grew up in Hoschton and attended Jefferson City Schools before enlisting in the U.S. Army.

During the eight years he spent in the military, Clarke served several tours of duty, specifically in Afghanistan and Iraq. He stayed in the military until he received a Veterans Affairs status of 100% Disabled-Unemployable due to PTSD, then he returned home to Jefferson.

Clarke said he attempted to commit suicide twice over the years, but the guns had jammed each time he tried, so he sought help through the VA. After being released from a VA hospital, he became involved with Warrior Outdoors, a Jefferson-based non-profit organization dedicated to guiding veterans who struggle with PTSD.

With the help of Warrior Outdoors, Clarke stopped drinking and started volunteering with the organizations to reach veterans like him.

“I just try to get them to the point where they open up,” Clarke said, referring to fellow veterans. “So far, that’s been the best thing for me is being able to open up.”

He plans to walk the entire length of the AT with a 26-to-32-pound pack containing the supplies he’ll need for food and shelter. Every three-to-four days, finally nearing a town, he’ll stop and resupply before continuing the journey. Clarke said he plans to finish the hike in six months.

Clarke is 30-years-old now and he’ll spend his 31st birthday on the Appalachian Trail on May 18 of this year.

He won’t be alone, however. Another fellow veteran from Oklahoma will travel alongside Clarke the whole way, carrying the ashes of a brother he lost to suicide last year.

According to Clarke, the man’s deceased brother was also a veteran. When the man finds the right place, Clarke said, he’ll release the ashes somewhere along the trail.

Clarke wants other veterans suffering from PTSD to take what he’s doing as a sign of hope. He said that he wants fellow veterans who may be struggling with PTSD to remember, if they’re ever down, they can always get back up.

Clarke said he also plans to do a 24-hour challenge by hiking a full day on the trail without stopping. He added that all donations sent during that 24-hour timeframe will go directly to Warrior Outdoors.

Anyone interested in donating can do so through Cash App at $AWClarke.

According to Clarke, no Jefferson resident has completed hiking the entire Appalachian Trail.

Color Bowls will be offered in the Commerce High School FFA plant sale.

Geraniums will be offered in the Commerce High School FFA plant sale.

Petunia Baskets will be offered in the Commerce High School FFA plant sale.

Tomatoes will be offered in the Commerce High School FFA plant sale.

The Commerce High School FFA will host its annual plant sale this week at the greenhouse. located at 272 Lakeview Drive.

This year’s offering consists of many varieties of tomatoes and pepper and tons of hanging baskets, as well an assortment of ornamental annuals.

All sales will be cash or check. T

o get a preview of the entire offering, visit the Commerce High School FFA on Facebook. 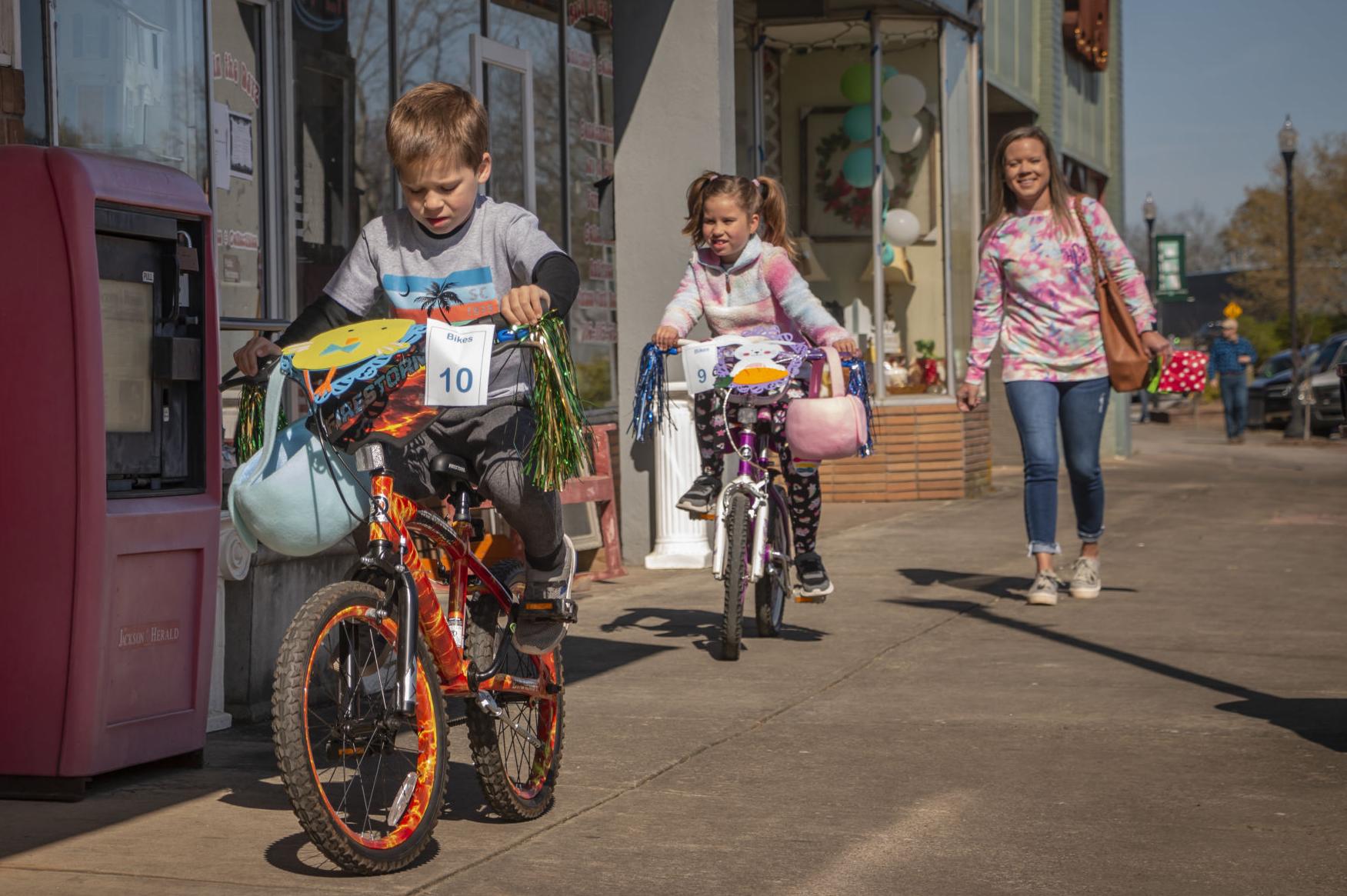 Children decorated their bicycles to participate in Commerce’s Easter parade on Saturday, April 3.

Jackson County is withdrawing its support of a Covid vaccination center at the county agricultural center.

Board of Commissioners chairman Tom Crow said April 5 that the county would no longer provide support services for the site, although the state would be welcome to use the facility if it wanted to continue with providing vaccinations there.

Crow said that around 700 people were vaccinated at the site on March 31, but that only 70 of those were from Jackson County.

Crow said that it isn't clear how people from Atlanta and other areas get on the state list and sent to the Jackson County location while some local citizens are being sent as far away as Atlanta for vaccinations.

The chairman said he had wanted the site to primarily serve local citizens and was disappointed at the lack of organization surrounding the vaccine efforts.

Plans are underway to hold a Celebration of Life event for the late Coach Jack Keen on Sunday, April 25, starting at 2 p.m. at The Arena at Jefferson High School. The day’s events will include the opening of an exhibit highlighting Coach Keen’s life and career, the dedication of his classroom and a ceremony featuring memories told by people that Coach Keen influenced during his life.

A granite marker and plaque recognizing Coach Keen’s lifetime of academic contributions will be placed at the school by the City of Jefferson.

A video history project is underway that will give students, athletes and friends of Coach Keen opportunities to share their memories about him. More information about this project will be released soon.

Jack Nolan Keen passed away on July 20, 2020. He spent 50 years in education; 42 of those years were at Jefferson High School as a teacher, coach, and mentor to thousands of students.