The 2020 voting is headed toward the finish line as the Nov. 3 General Election comes to a close next week.

Through Saturday, Oct. 24, there had been 5,141 Banks County citizens who had either voted by absentee ballot or by in-person early voting. This is 37 percent of the county's registered voters.

A breakdown of those who have voted so far includes 4,000 in-person voters and 1,141 mail-in ballots.

The only location for early voting is at the Banks County Election Office, located at 226 Candler Street in Homer.

On Election Day, Tuesday, Nov. 3, all voting will be held at the Banks County Recreation Department, located at 607 Thompson Street, Homer.

Races on the ballot (with opposition) include:

There will also be two proposed constitutional amendments on the ballot:

•Authorizes dedication of fees and taxes to their intended purposes by general state law: Shall the Constitution of Georgia be amended so as to authorize the General Assembly to dedicate revenue derived from fees or taxes to the public purposes for which such fees or taxes were intended? Yes or No

One statewide referendum will be on the ballot:

•Establishes a tax exemption for certain real property owned by charities: Shall the act be approved which provides an exemption from ad valorem taxes for all real property owned by a purely public charity, if such charity is exempt from taxation under Section 501(c)(3) of the federal Internatl Revenue Code and such real property is held exclusively for the purpose of building or repairing single-family homes to be financed by such charity to individuals using loans that shall not bear interest? Yes or No 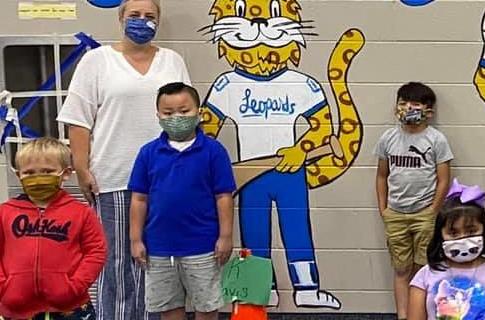 As seasonal illnesses begin to increase, Banks County Primary Schools students are posing with masks on to strongly encourage everyone to wear a mask to keep themselves and others safe.

Banks County principals reported to the board of education at the October meeting last week that there continues to be low number of cases of COVID-19 at the four schools in the county. Superintendent Ann Hopkins also reported that the number of COVID-19 cases have been low this school year.

For the week of Oct. 19, two students and one employee have tested positive for COVID-19. There are 2,759 students and 404 employees in the school system.

Twenty-eight students and five employees have been quarantined due to possible exposure to COVID-19.

The number of cases are published weekly on social media (at Banks County Schools on Facebook).

Other information presented by primary school principal Mandy Dale included: The school-side fundraiser is wrapping up; Coca-Cola product rewards are being collected; Little Leopards are working to earn Little Leopard Bucks by being “responsible, respectful, safe and kind.” A video was shown with students sharing why they are glad to be back at school.

Other information presented by middle school principal Mike Boyle included: Enrollment is up to 673 students; no in-person Veteran’s Day or Heritage Day programs will be held with virtual experiences to be held instead in the Social Studies classrooms; and Tisha Allen is the Year of the Year and Ricky Williamson is the Employee of the Year. A video on the student-produced morning show was presented.

Other information presented by high school principal Christine Bray included: The band brought home several first place awards from the recent Tournament of Bands; Woodman of Life donated $500 to the school which was used to purchase two picnic tables; a staff pumpkin decorating contest and COVID mask decorating contest are both planned; a blood drive will be held Nov. 2; a staff chili cook off will be held Nov. 6; Brittany Brown is the Teacher of the Year and Teresa Royston is the Employee of the Year.

In other business at the meeting, the BOE:

•approved a project request from the high school band to sponsored a BBQ plate sale on Nov. 14.

“School isn’t just a place for learning,” organizers state. “For some of our most impoverished kids, it’s also the only reliable source of food in their lives. The sad truth is that from Friday afternoon until they return to school on Monday morning, some of these children may not know if or how much they’ll get to eat.”

Food 2 Kids is a program that helps bridge that gap for some of the community’s neediest kids. Sacks of kid-friendly food — enough for at least six meals — are handed out every week to children identified by school teachers, counselors and officials as being most in need.

The disposable sacks will have approximately seven to 10 pounds of food — enough for two days of meals. The food is in easy-to-open packaging and doesn’t require any cooking.

A donation of $275 sponsors one child for an entire school year (40 weeks). All donations are tax deductible.

Banks County native Vicki Boling has been appointed to the Jackson EMC Foundation Board of Directors.

The Jackson EMC Foundation is a 501(c)3 organization established to represent the members of Jackson EMC and distribute money collected from members participating in Operation Round Up®. The 11-member volunteer board of directors meets monthly to review and select grant applications for worthwhile, charitable purposes that will improve lives and respond to immediate needs.

Since Operation Round Up’s beginning more than 15 years ago, the Foundation has awarded over $16 million through 1,566 grants to organizations and 389 to individuals.

Along with her father, Boling manages several family businesses in Banks County, including Document Destruction Services, Inc. and Data Survival, Inc.; as well as Books with A'Peal in Cornelia. Her career also includes working in a variety of positions for various software companies, and 13 years serving as a group sales manager for Chateau Elan.

She is a graduate of the Women’s College of Brenau University with a degree in Business Administration and Banks County High School. Boling is a graduate of Leadership Banks and the Georgia Academy for Economic Development.