Barrow County is planning to eventually expand the judicial courthouse and detention center off Barrow Park Drive in Winder in the coming years, and county officials are eyeing future special-purpose local-option sales tax monies as the funding source for the future multi-million-dollar project.

The county board of commissioners, during its Tuesday, Oct. 13 voting session, approved $45,000 to fund a space needs and expansion study for the 84,153-square-foot facility. Silling Architects will complete the work and eventually provide an assessment for projected needs, county manager Mike Renshaw said. He added that the study is needed with the county’s population expected to continue to grow over the next several years.

The current complex, constructed more than a decade ago through the use of voter-approved SPLOST funds, was built with a “minimal expansion area” at the courthouse to accommodate the inclusion of the Barrow County State Court, and the detention center footprint includes space for an additional 64-bed housing unit.

Renshaw said the study will explore options for developing new housing units beyond the footprint of the current building and will explore the addition of additional courtrooms, judicial offices and jury assembly space.

The study will also eventually give projected construction costs for the future expansion.

Renshaw said he did not currently have a projected cost, but he said old, possibly outdated estimates for the jail expansion were in the $2.5-3 million range.

If the county continues moving forward in the direction of an expansion and wants to use SPLOST funds, that would likely require that voters OK an extension of the current 1-cent SPLOST that expires June 30, 2023 — meaning another referendum would likely be put before voters sometime in 2022.

Renshaw said he is recommending the county pursue designating the project as “Level 1,” which would mean money would be taken right off the top of the SPLOST collections to fund the expansion. The building of the judicial courthouse and detention center was a Level 1 project in the SPLOST 2005 referendum that voters approved.

“This is going to be a major project,” BOC chairman Pat Graham said. “But it will also impact the amount of SPLOST proceeds the county and each city gets, so this will take a lot of communication with them in making sure they understand” the need for the expansion.

In other business Tuesday, commissioners:

•approved letters of roundabout support for both Phase III of the West Winder Bypass and for State Route 53 at Jackson Trail Road. The county would enter into agreements with the Georgia Department of Transportation for the county to pay the energy costs and be in charge of landscape maintenance for the roundabouts. The Bypass Phase III roundabouts are projected to have a construction contract let in January 2022, and the projected let for a construction contract for the SR 53/Jackson Trail Road roundabout is January 2024.

•approved the county’s 2021 LMIG application packet for road projects. The county will receive $739,880 from the state and a minimum 30-percent county match is required. The recommended stretches of road selected for resurfacing include Manning Gin Road, 3.9 miles from the Bethlehem town limits to Marbury Creek; and County Line-Auburn Road, 1.42 miles from State Route 211 to Dee Kennedy Road. The county is contributing a 31.25-percent match for a total project cost of $961,844. All work is expected to be completed by next summer.

•approved a Center for Tech and Civic Life grant in the amount of $40,632 to pay for expenses on the county’s ballot drop box; personal protective equipment purchases for elections staff, poll workers and voters; polling location rental and cleaning expenses for early voting and election day facilities; temporary staff and election administration equipment.

•approved a county code amendment regarding “major” and “minor” subdivisions which stipulates that a property can be split into as many as five lots within any three-year period and remain classified as a minor subdivision.

•approved the revised Unified Development Code, with the requirement that the county’s future land-use map must be changed before any incompatible zoning district is allowed for a property. Applicants can submit requests to change the land-use map along with their rezoning applications.

•approved a request by Bruce Russell and the Alex B. Russell Estate to rezone 49.51 acres on Mulberry Road for a 42-lot residential subdivision. Among the conditions for approval are that the homes have a minimum of 2,000 heated square feet.

•denied a request to only have a 6-foot-tall privacy fence between a convenience store/truck stop being developed at 1158 Carl-Bethlehem Rd., Winder, and neighboring properties instead of a 12-foot-tall fence, which was a condition of an approved rezoning of the property last year because the applicants had a waiver of a required 100-foot buffer. The buffer was dropped to 50 feet.

•approved a special-use request by Elizabeth Milan to operate an art school at 2276 Hwy. 82, Statham, by utilizing the existing structures on the property, with the possibility of adding another building in the future for student lodging.

•approved the purchase of a truck for the roads and bridges department from Akins Ford in the amount of $54,129.

•accepted the Piedmont Area Traffic Enforcement Network Grant in the amount of $19,761.

•accepted a grant through the Office of Justice Programs Coronavirus Emergency Supplemental Funding Program in the amount of $58,769, for coronavirus hazard pay for first responders.

•approved the refunding of a portion of the Barrow County School System’s outstanding Series 2010 bonds, which total a principal amount of $22.92 million, in order to achieve a savings in the system’s debt-service requirements.

A recent aerial view of the park expansion, which includes a synthetic-turf multipurpose field, two grass multipurpose fields, an eight-court tennis complex and a dog park. A tennis pro shop is also being constructed. 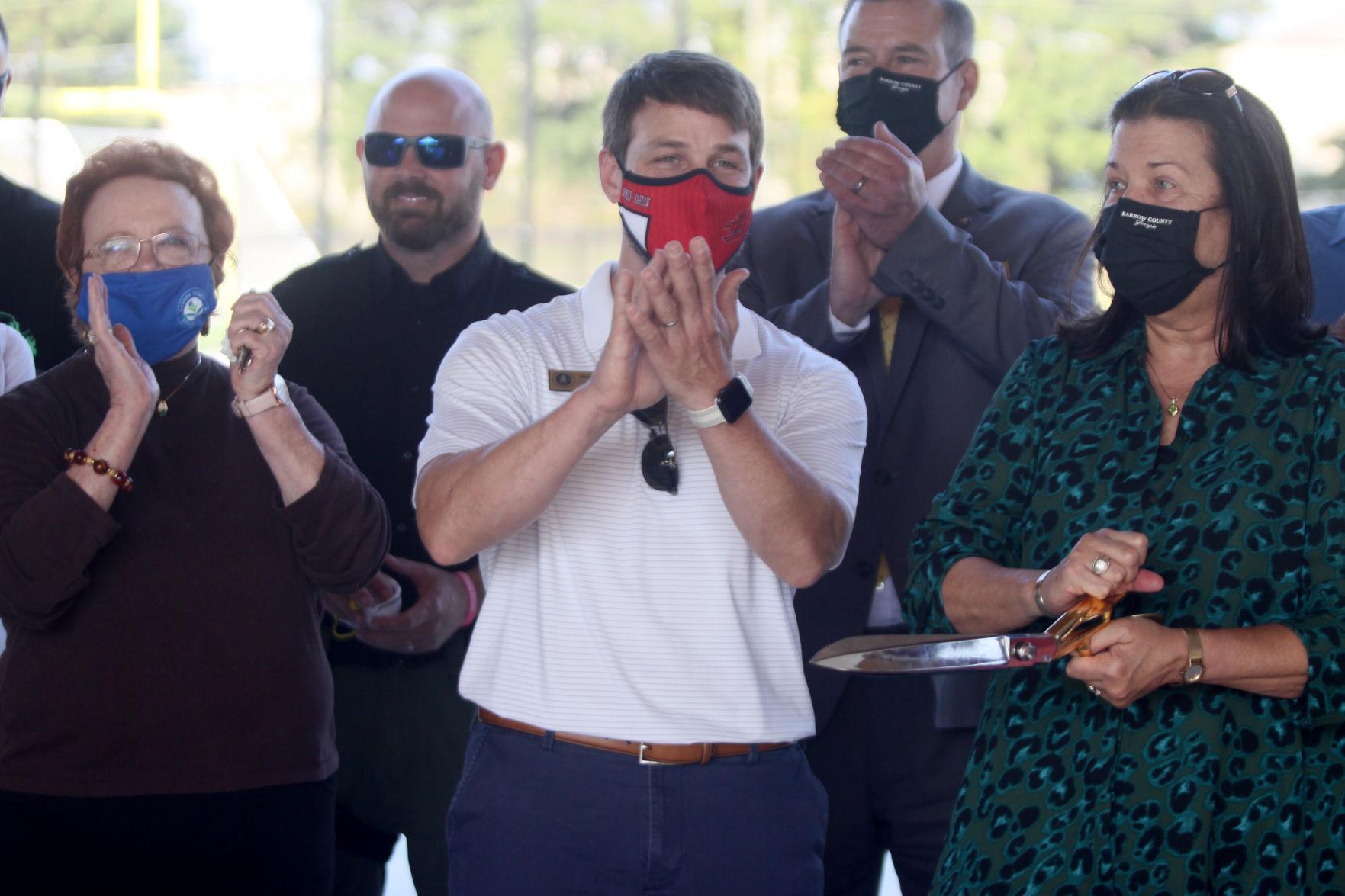 Barrow County board of commissioners chair Pat Graham cuts the ribbon, as commissioner Rolando Alvarez (middle), board of education chair Lynn Stevens (left) and others applaud. 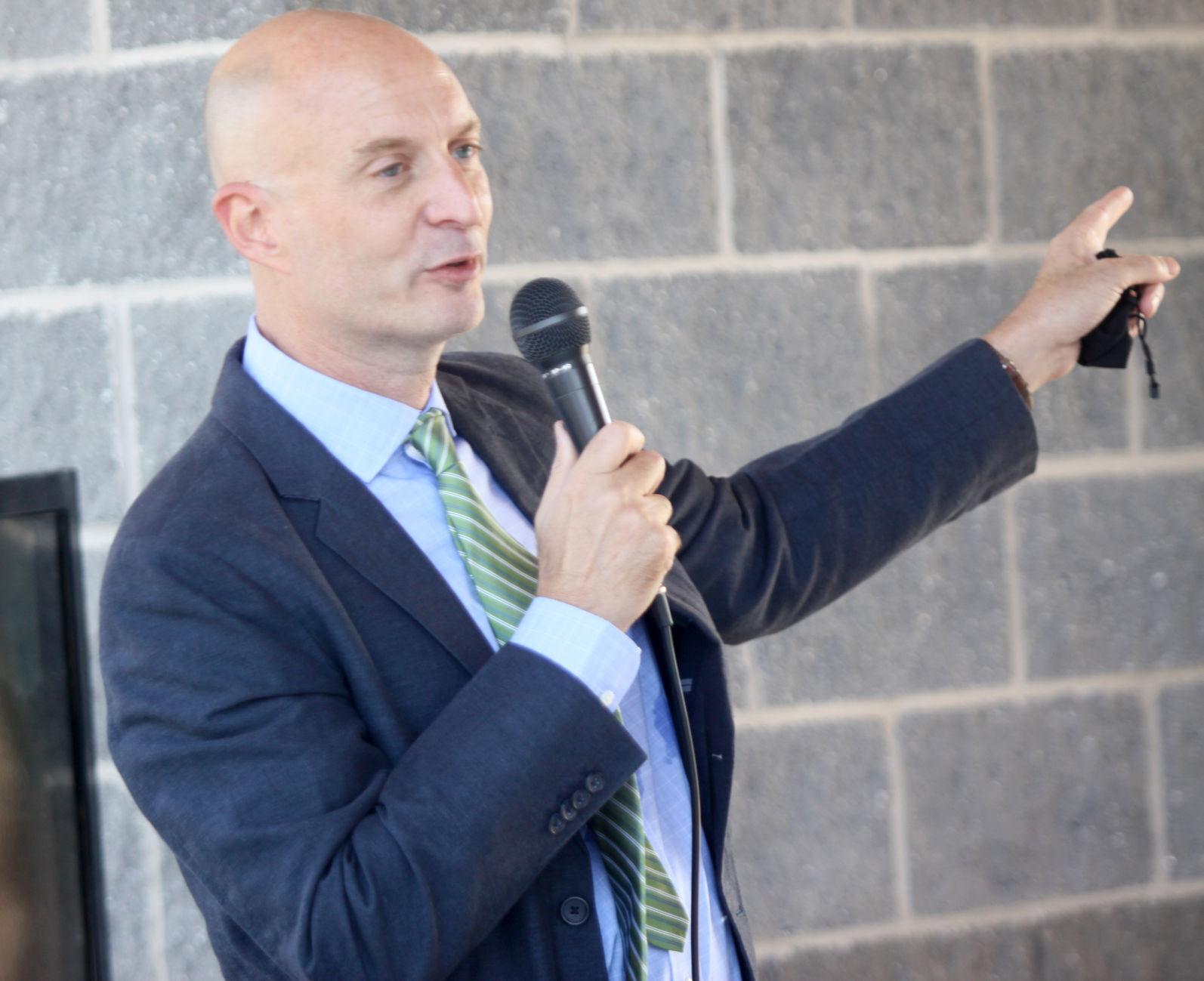 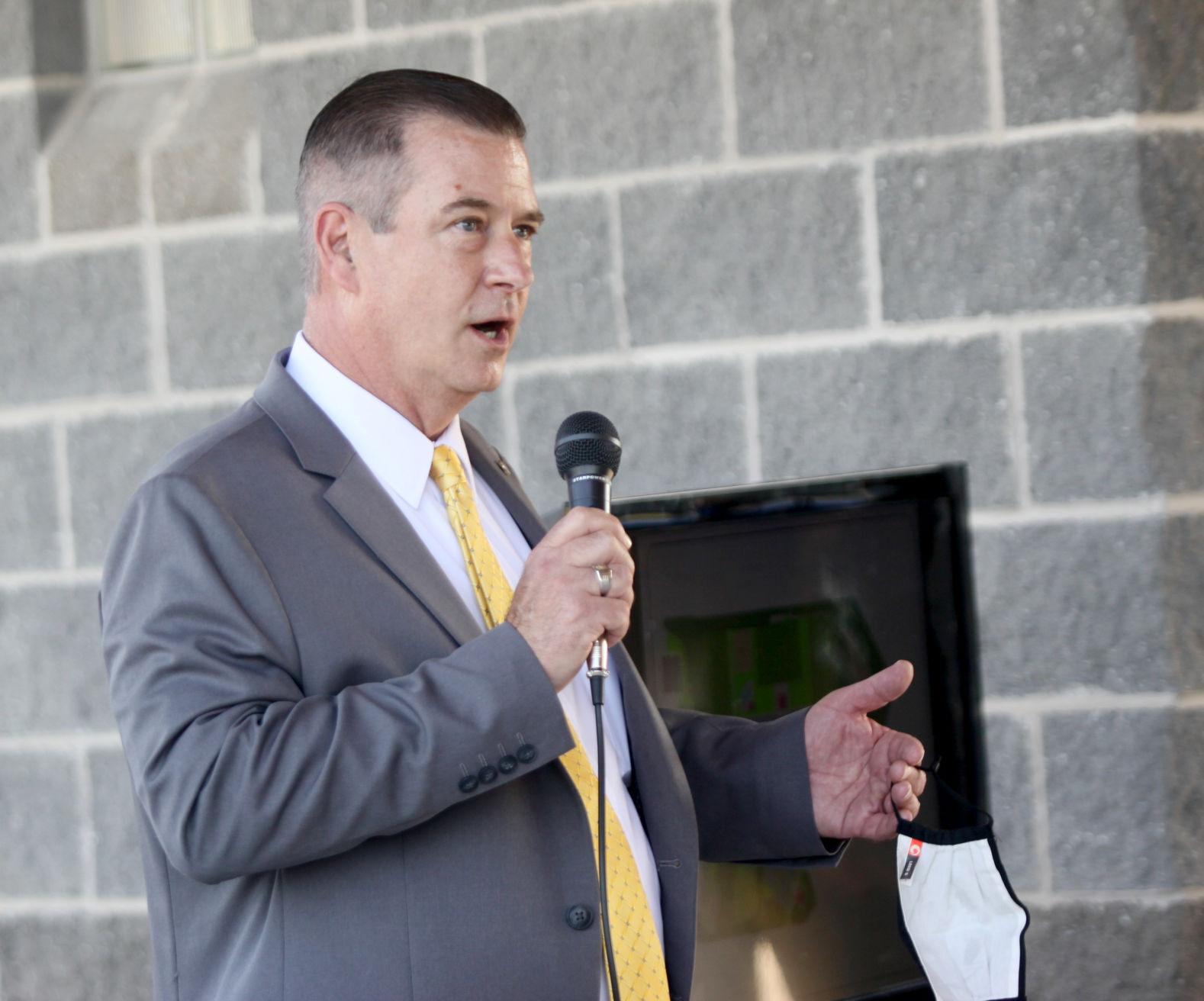 The Barrow County School System on Thursday, Oct. 8, reported another sharp weekly increase in coronavirus-related quarantines for the past week, while the number of newly-confirmed COVID-19 cases also went up.

For the week of Oct. 1-7, six students across the district tested positive for COVID-19, three were listed as a “probable” case and 267 other students were kept out of the schools as a precaution due to direct contact with someone with a positive or probable case, according to the most recent data. The district has been releasing weekly updates every Thursday.

The total number of students impacted for the week (276) was up from 154 for the week of Sept. 24-30 — when three students had confirmed-positive cases and one was listed as a probable case — and 69 the week before that.

The most significant impact for the past week was at Westside Middle School, where 130 students were sent home from or kept out of school — including 29 on Tuesday, Oct. 6, and 85 on Wednesday, Oct. 7. Elsewhere, 28 students at Winder-Barrow High School and 20 at Bramlett Elementery were impacted Tuesday, and Yargo Elementary had 28 students impacted Monday after 81 there were impacted the previous week.

“Direct contact” is defined as making physical contact with or being within 6 feet, for minutes or more, of a person who has a confirmed-positive test result or a suspected case.

The district is not disclosing information on when students are able to return to the buildings, as officials have noted the amount of time a student has to quarantine varies depending on whether they exhibit symptoms and other factors.

Officials with the Georgia Department of Public Health have said they won’t publicly disclose details about any outbreaks at schools that are being investigated, but have requested that all public schools submit weekly reports.

The discretion has been left up to individual school districts to share with their communities the impact of COVID-19 on their facilities, and Barrow County has been releasing a weekly update with school-by-school student numbers and district-wide staff numbers.

The parent of any student who has a positive/probable case or has close contact with a person with one either is contacted immediately by the school with a phone call and follow-up letter. Students not effected are not contacted.

A local developer’s plans to build a large mixed-use, high-density residential development in Hoschton were rejected by the Barrow County Board of Commissioners on Tuesday, Oct. 13, following a contentious public hearing.

Commissioners voted 5-2 (with commissioners Joe Goodman and Bill Brown in opposition to the motion) to deny Ridgeline Land Planning and Holt Persinger’s request to rezone 53.2 acres at 1308 Lec Stone Rd. — about a mile south of the intersection of highways 211 and 124 — to R-3 in order to build 280 apartment units, 158 townhomes and commercial space on roughly 8.5 acres of the property. The decision came a little less than a month after the county planning commission recommended denial of the request, citing concerns raised by residents over the impact the development would have on traffic in the area, stormwater issues and property values for nearby neighborhoods.

“I have some serious reservations about this (project),” said commissioner Ben Hendrix, who seconded commissioner Billy Parks’ motion to deny the request. Parks said he took the county planning staff’s recommendation to only approve the rezoning with R-2 density (which would have eliminated the apartment component) as their opposition to the applicant’s request.

As they did at last month’s planning commission meeting, a large contingent of residents near the property showed up with signs urging the commissioners to vote no in the BOC chambers, while many others waited downstairs in a holding area at the Historic Barrow County Courthouse and watched a live video feed of the meeting — cheering loudly for those who spoke in opposition to the request and booing attorney Aaron Kappler, who was representing the applicant.

Kappler said property rights were at stake in the project and said that the board should not allow strong public resistance to control its decision.

“The law doesn’t allow for mob rule, and the law doesn’t tolerate anger,” Kappler said, adding that the proposed project was “perfectly situated” for future businesses and employment that would be coming to Barrow County and their prospective employees.

The handful of residents who spoke during the public hearing countered that it was their property rights under attack, along with their “quality of life.”

“This development is not good growth for Barrow County,” resident Bryan Capes told commissioners. “We are begging you to vote no on this horrendous development.”

REZONING FOR LARGE SUBDIVISION GETS GO-AHEAD

In an unrelated vote Tuesday, commissioners unanimously approved a requested change in conditions for the development of 92.23 acres just west of the intersection of highways 124 and 211 and south of Interstate 85 in Hoschton, clearing the way for the construction of a subdivision with up to 293 single-family homes and various amenities.

Shane Lanham, the attorney for applicant Manor Restorations, had requested the BOC table the item last month, but told the board Tuesday the applicants had finally resolved concerns over the projects after a Friday, Oct. 9 meeting with nearby residents.

The property was rezoned for master-planned mixed-use development in 2006 as part of a settlement between another developer and the county and had been planned to be developed with 197 single-family lots, 92 townhomes and 116,000 square feet of commercial space.

Instead, Manor Restorations was seeking changes to the conditions that were attached to the rezoning related to exterior building materials, and they opted to scrap the townhome and commercial components of the project.

The minimum heated square footage for the homes will be 2,000 square feet.