A large mixed-use development is being proposed in Braselton.

The project, which is planned on 40 acres on Jesse Cronic Rd., is set to go before a state review process. The property is located right off Jesse Cronic Rd. when turning off of Broadway Ave., next to the Free Chapel Braselton campus.

Given the size of the project, developers were required to submit a Development of Regional Impact application with the Georgia Department of Community Affairs. The state’s finding will be sent back to the town and town leaders can then consider the recommendation when the request comes for a rezoning.

If ultimately approved, the project could be completed by 2025. 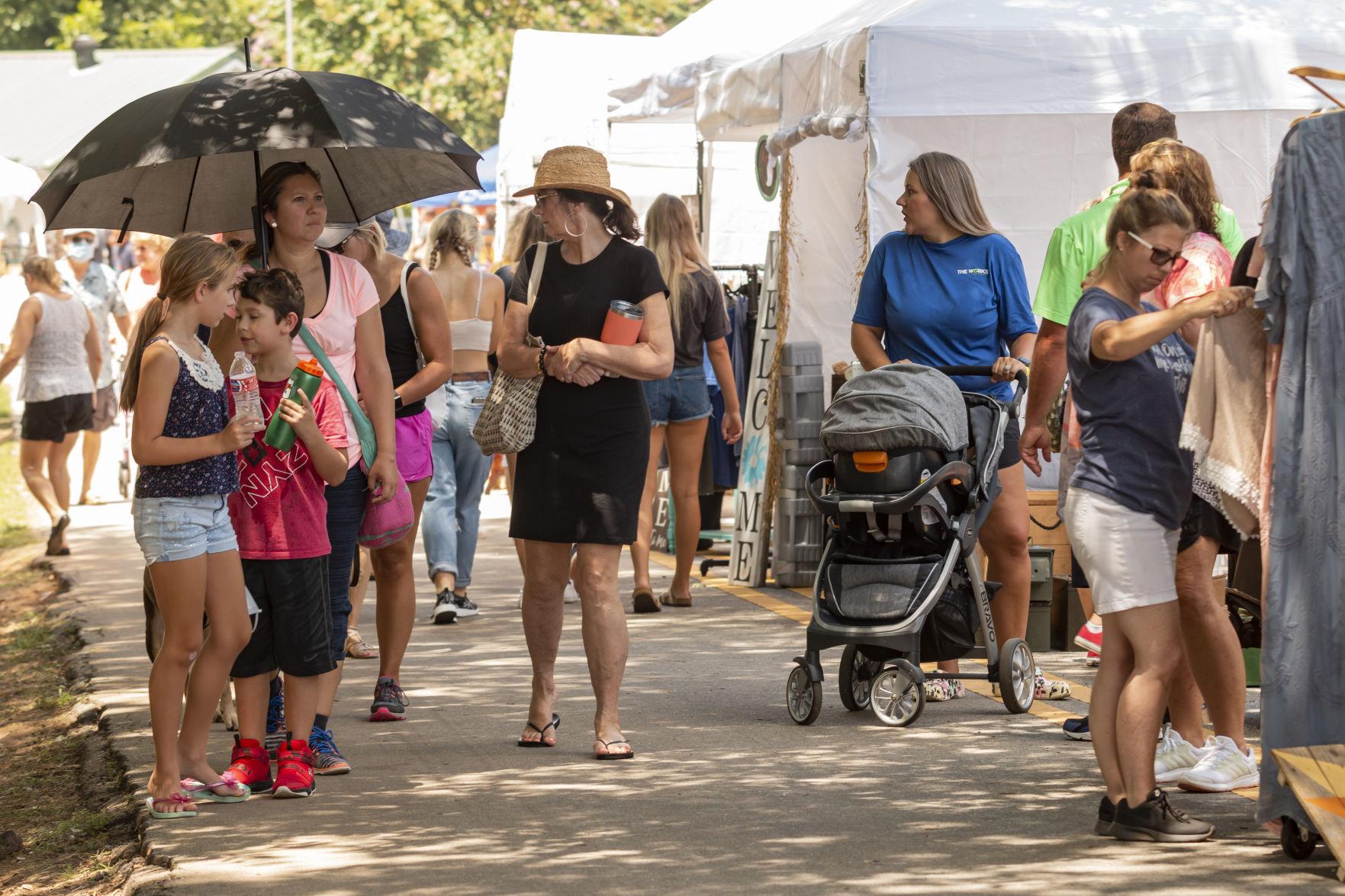 Countryside Antiques hosted its antique and artisan festival in downtown Braselton on Friday, July 24 – Sunday, July 26. Over the course of the three days it was estimated that 20,000 visitors attended the festival and shopped at the 250 booths celebrating its 18th summer market. The event featured true antiques, collectibles, furniture, farmhouse, local artwork, boutique, home décor, handcrafted, primitives, rustics, salvage, “good ole junk” and more. The festival also featured live music and food trucks. There were also several comfort stations offering masks and hand sanitizer for those who are still taking Coronavirus safety measures. Countryside Antiques is already looking forward to its next festival in August. The small art-tiques festival will be held on Friday, August 21-Sunday, August 23. 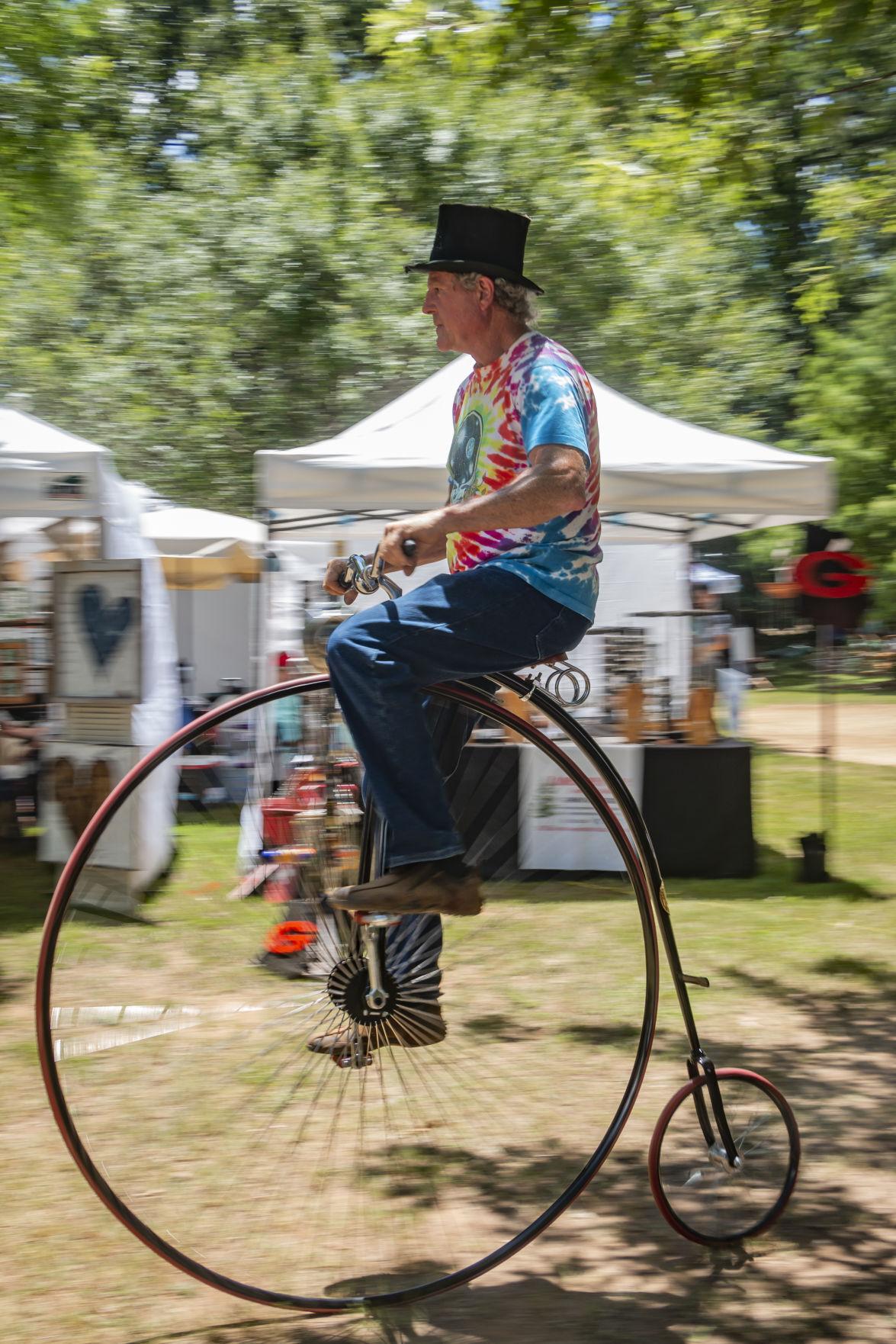 Ray Musslewhite, of Bishop, was turning heads as he took his penny farthing bicycle for a spin at the Braselton antique and artisan festival. The bike is a reproduction custom built at www.highwheel.com. The bike’s nickname, penny farthing, originates with the British coins. The wheels on the bicycle were of two different sizes, one wheel larger than the other. The penny was the larger coin in comparison to the farthing. Musslewhite also sold custom bells at the festival. The name of his booth is Hellsbells.

Noble Vines, a new multi-family residential development in Braselton, has been completed.

“Moderate-income families can find themselves in a tough spot when it comes to finding housing. Market-rate apartments may be out of their budget while their income is too high to qualify for affordable housing,” said Scott Hoppa, Senior Vice President of McShane’s Southeast Region. “Through HUD 221(d)(4) financing, Noble Vines will provide moderate-income families with a beautiful home and fantastic amenities at a price they can afford.”

The development also incorporates many resident amenities, including a clubhouse with a resident lounge, fully equipped fitness center, sundeck with grilling stations and a resort-style swimming pool. The property also provides tenants with access to a pet washing station, dog park and car wash.

The architect of record for Noble Vines at Braselton is Studio for Housing Design.

Northeast Georgia Health System is treating more positive COVID-19 patients now than it did during a peak earlier this year.

As of July 28, NGHS has 173 positive COVID-19 patients, 42 of whom are at Northeast Georgia Medical Center Braselton. Those totals are higher than the previous peak day on April 29, when the hospital system had 159 positive patients (28 at NGMC Braselton).

NGHS has seen a steady climb over the past few weeks. Throughout the month of June, the total number of COVID patients mostly hovered in the 60-70 range. But the numbers started to climb in mid-July.

Totals positive COVID-19 patients at NGHS and NGMC Braselton on Tuesdays for the past five weeks include:

As of July 28, the hospital system had 75 patients awaiting test results and ventilator usage was at 44%.

The hospital system has discharged 1,414 patients to date. There have been 154 deaths.

Across the state of Georgia, there have been 170,843 confirmed COVID cases, with 17,138 of those resulting in hospitalizations. There have been 3,509 deaths in the state.

Details for Braselton's four-county area include:

The Oaks at Braselton, a personal care home off Thompson Mill Rd., has had three residents and nine staff members test positive.

Hall County planners are slated to hold a hearing next week on a proposed Braselton-area apartment complex.

Rochester & Associates, Inc., is requesting a rezoning of 30.66 acres on Thompson Mill Rd. near Spout Springs Rd. from agricultural residential to planned residential development. The request was set to be heard by the Hall County Planning Commission earlier this year, but was ultimately tabled at the developers' request. It is set to be heard August 3.

Developers plan Braselton Commons, a 350-unit gated apartment project, on the site. Apartments would be split between 13 buildings and would include one, two and three-bedroom residences.

“The proposed development will provide additional housing opportunities to major employers in the area, including Northeast Georgia Medical Center (Braselton) only two miles away,” according to the letter of intent.

If approved by the Hall County Board of Commissioners, the project could be complete by 2022. 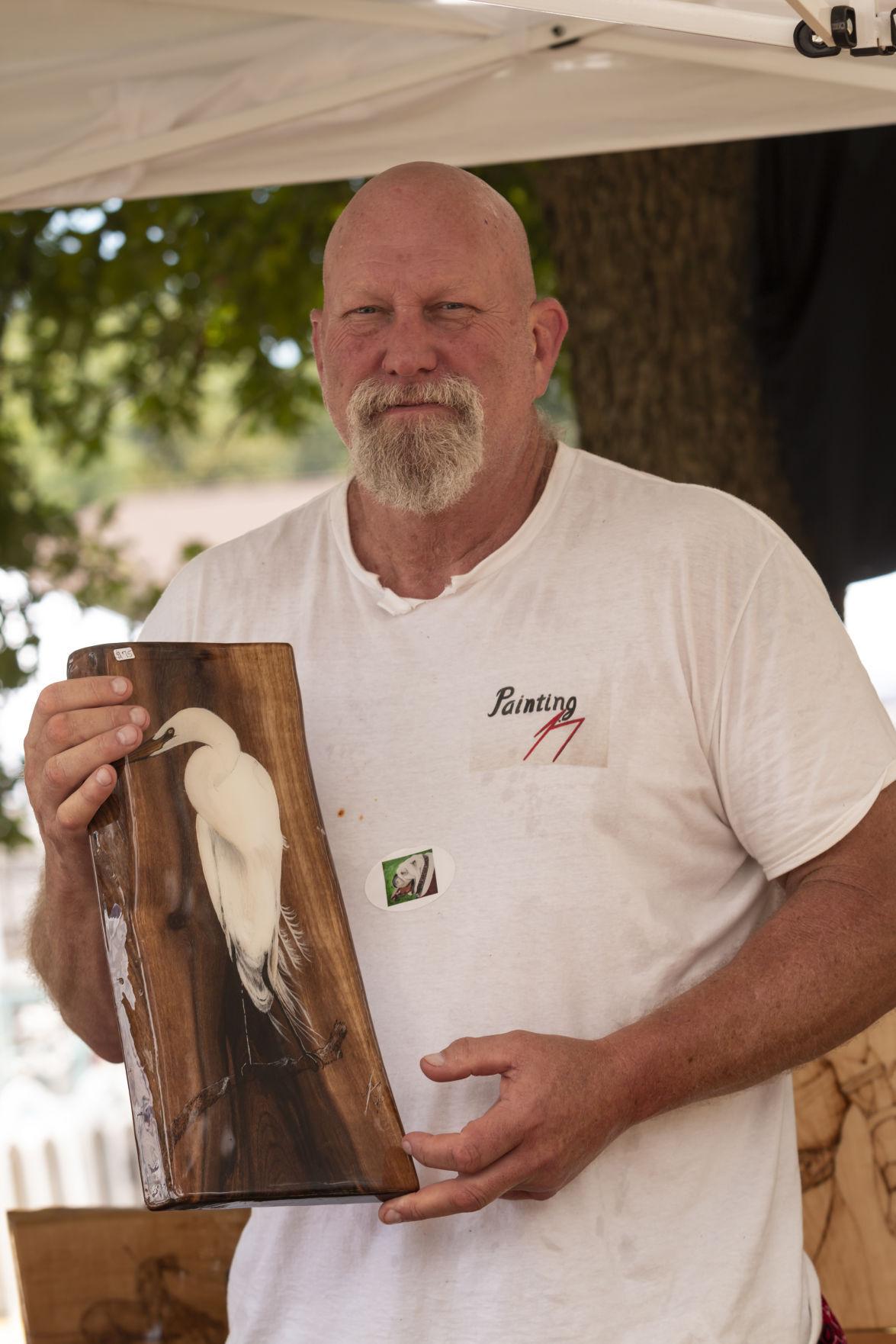 Jim Hamilton sold and displayed his unique paintings, drawings and wood burnings at the Braselton antique and artisan festival on Sunday, July 26. Here he is shown with one of his acrylic on wood pieces.

Braselton is set to consider an update to its comprehensive plan at a meeting this week.

The Braselton Town Council will consider the 2020-40 comprehensive plan update at a called meeting July 29 at 6 p.m. The meeting will be held in the Braselton Police and Municipal Court building at 5040 Hwy. 53 in downtown.

The council deferred a vote on the updated comp plan on July 13 to give additional time to get some questions answered.

The town's comp plan outlines thousands of broad suggestions about how the community could grow over the next 20 years, but the details of that will be tied to the town's zoning and development codes.

Those codes are in the process of being rewritten.

What could be the most controversial aspect of the code rewrite is an effort to make the codes more friendly to greater housing diversity in Braselton.

Among the ideas outlined in the comp plan are lowering minimum housing sizes in the town's zoning codes and to allow housing with only one-car garages in future residential construction.

The plan also calls for allowing mixed housing sizes and lots within some developments. The comp plan says that town's current strict regulations could "turn off" some developers of quality projects in the community.

But members of the town council seem cool or unsure about the idea of smaller garages and smaller house sizes during an update of the comp plan given to the council on July 9.

The code overhaul will involve input from citizens, said town manager Jennifer Scott. She also said that the council itself would be involved as the rewrite process moves forward.

"It's a balance," Scott told the council.

Once a draft of the codes has been produced, it will go to the town's planning board for review before coming to the city council for final action in early 2022.

Other highlights in the updated comp plan include:

•an acknowledgement that citizens surveyed showed little support for more warehouses in the town. Partly as a result of that dynamic, the town's new planning map now shows a "condensed" area for Transitional Employment Center, the area designated for warehouses. That area runs west of downtown along I-85, the west side of Hwy. 53 and part of the way down Hwy. 124.

• an acknowledgement of the key role Chateau Elan plays in the area's economy.

• says that the I-85 and Hwy. 211 interchange will be "the central gateway to Braselton" and should "boast high-quality development."

• consider a Community Improvement District for the Hwy. 53 corridor and for the downtown areas to raise money to pay for projects in those areas.

• a wish list of projects for the town in the coming years, a list that would cost over $46 million if all the projects were done. Among the top projects outlined are: an addition to the library; a 71-acre recreation area on Hwy. 124; additional parks; extension of Riverwalk; and transportation projects including new sidewalks, bike paths, new street lighting, highway widening, additional highway signage and a multi-use bridge over Hwy. 211.