The coronavirus pandemic continued to exact a heavy toll on Winder Health Care and Rehabilitation over the past week as six more resident deaths due to COVID-19 were reported, bringing the total number of fatalities at the nursing home to 13.

As of Monday, May 18, the Georgia Department of Community Health had confirmed positive cases in 83 residents of the East May Street facility — more than two-thirds of the resident population there — and 26 employees since the start of the outbreak.

Of the 70 living patients who have been infected, several have recovered and been highlighted on the facility’s Facebook page, while many others have been asymptomatic. Administrator Katy Callaway said 43 residents are now considered recovered, and while some were still hospitalized as of Tuesday, only three currently at the facility are experiencing symptoms.

Most of the infected employees have recovered and been able to safely return to work under federal guidelines. Three are currently out sick and self-isolating, Callaway said. She said a couple more test results are pending for residents whose families wanted them to be retested.

“We are very sad about the residents we’ve lost and our hearts continue to go out to their families,” Callaway said. “With many of our residents recovering, we are hopefully about to come out on the other end of this, but there are still a lot of unknowns with this virus.”

Winder Health Care has been one of the hardest-hit facilities among the 366 currently listed by the DCH with at least one confirmed case. It ranks in the top 30 in percentage of residents who have tested positive and only 13 other facilities have had more staffers test positive.

A community prayer service for Winder Health Care was held in the facility parking lot Thursday, May 14.

“It was a wonderful thing to see the community support, and the residents really enjoyed getting to watch it,” Callaway said.

Across the affected facilities in the state, 5,035 residents have tested positive and 820 have died, just under half of the overall statewide death toll confirmed by the Georgia Department of Public Health as of Tuesday, May 19. A total of 2,077 employees of long-term care facilities have tested positive since the start of the outbreak, according to the DCH.

Elsewhere in Barrow County, one resident and one employee have tested positive at the Mulberry Grove assisted living facility in Statham.

The latest numbers included 265 confirmed cases and eight confirmed deaths in Barrow County. The number of deaths confirmed doesn’t match the number of deaths reported at Winder Health Care, but there could be at least a couple of reasons why — the DPH lists the county of death by the formal address listed for a person and state officials have also acknowledged a lag in the DPH data of up to two weeks due to the way information is reported and verified.

The statewide numbers have continued to increase as the state has rapidly boosted its testing capacity and encouraged all Georgians to get tested regardless of whether they are symptomatic or not. Georgians can set up a screening by contacting their local health department, which will refer them to the closest or most convenient testing site.

State officials have been optimistic about a plateauing and reported decline in daily confirmed cases and a reported drop in hospitalizations. According to the latest “situation report” released Monday by the Georgia Emergency Management and Homeland Security Agency (GEMA), there were 1,025 current confirmed hospitalizations across the state, roughly a third less than at the start of May. That number does not include the patients hospitalized who are suspected of having COVID-19 and have not received their test results back.

Gov. Brian Kemp’s office said in a news release Tuesday that the number of current confirmed hospitalizations was down even more to 986.

"Our hospitalization numbers continue to show encouraging signs in our fight against COVID-19, but we must remain vigilant in our efforts to combat this virus," Kemp said. "I continue to ask Georgians to practice social distancing, follow the advice of public health officials, and protect the elderly and medically fragile."

Public health experts around the state have said the shelter-in-place order that was in effect throughout most of April helped slow the spread of the virus but have cautioned that it’s still too early to tell the full effect of the gradual easing-up of restrictions that began late last month.

Across Northeast Georgia Health System, 99 patients confirmed to have COVID-19 were being treated at the system’s hospitals and other facilities while 131 more were awaiting results. That total of 230 was down from 238 on Monday.

The number of patients at Northeast Georgia Medical Center Barrow in Winder who are positive for COVID-19 increased from eight on Monday to nine on Tuesday. Forty people with COVID-19 had been released from the Winder hospital as of Monday. Systemwide, 508 have been released (13 more on Tuesday) and 69 people had died of COVID-19 at NGHS facilities, 42 of them from Hall County.

Hall County has been one of Georgia’s most impacted counties and Gainesville has been deemed a “hotspot” for the virus, though local and state leaders have said they are encouraged by a recent decline which they attribute to the community’s efforts to slow the spread.

NGHS president and CEO Carol Burrell said the hospital system began sharing data with the governor’s office in mid-April, “…and they quickly realized that we were seeing a swift increase in our numbers.”

The state also recently offered a mobile unit for NGHS, which was being deployed on Friday, May 15. The unit will be used for the hospital’s non-critical virus patients and could allow more flexibility if the number of cases begins to rise again.

“This unit is important to us in that it will add an additional 20 beds for our non-critical COVID patients going into the future,” Burrell said. “It also gives us more beds and staffing should we have to get creative should the numbers start to rise again.”

Burrell said they’ve seen a steady decline over the past couple of weeks, adding that NGHS hospitals are running between 70- and 80-percent capacity each day.

“We are cautiously optimistic that we are going to keep going in that direction and staying steady, but we’re not out of the woods yet,” she said.

Burrell added the decline in cases is due to the community’s focus on quarantining and isolating responsibly. She urged the community to continue to avoid large crowds, wear masks around others, maintain social distance and regularly wash hands.

“If we do that, if we keep working together, we will continue to beat this thing,” she said.

In a visit to Gainesville on Friday, Kemp echoed many of Burrell’s comments and praised the “good people of Gainesville” for helping flatten the curve in the area.

He also highlighted the efforts to raise awareness about the virus within the Hispanic community. During a conference call last month, NGHS leaders said half of their positive COVID-19 patients were Hispanic.

Kemp noted the community efforts have helped “stop the spread” in Hall County.

“There will be a day soon when this hospital only has one new COVID patient, or hopefully none,” he said.

Alex Buffington contributed to this story. 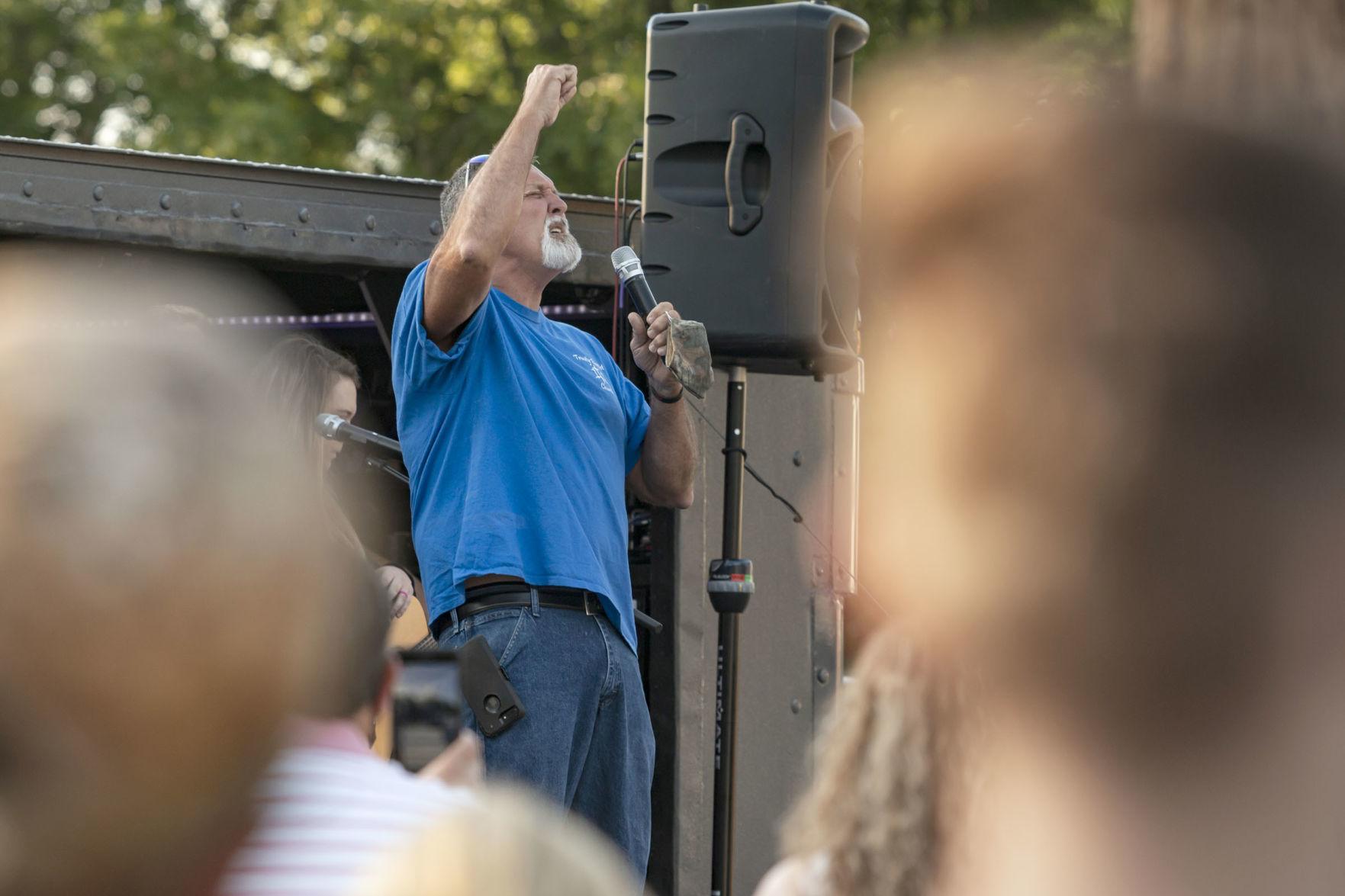 Trinity Baptist Church of Auburn pastor Frankie Green prayed for a cure for the coronavirus at a service held at Winder Health Care and Rehabilitation Center on Thursday, May 14. The nursing home on East May Street has been hard-hit as 13 residents had died as Monday, May 18. Another 70 residents and 26 employees have tested positive for COVID-19 since the start of the outbreak. The event was organized by April and Heath Kennedy of Carter Hill Christian Church and members of Bethlehem Church. Leaders of Winder Health Care announced they received a State of Georgia Department of Community Health COVID-19 Communicative Technology grant to incorporate smart devices into the facility to connect residents to their family back at home.

Northeast Georgia Health System is among several hospitals across the state to receive an allotment of the drug remdesivir. The medicine is being used to treat COVID-19 patients with serious symptoms.

The Georgia Department of Public Health (DPH) recently distributed an initial allotment of the drug remdesivir received from the federal government. Georgia received 30 cases, with 40 vials of the drug per case, enough to treat about 110 patients, depending on the duration of an individual’s treatment.

"Remdesivir is an antiviral medicine being used to treat hospitalized patients with serious symptoms caused by COVID-19 like low oxygen levels or pneumonia," according to a DPH news release. "It has been found to shorten the duration of disease in patients being treated in inpatient hospital settings. Remdesivir is given intravenously (IV) and decreases the amount of coronavirus in the body, helping patients recover faster."

The distribution plan for remdesivir in Georgia was developed by DPH leadership, including district health directors and emergency preparedness staff, in accordance with Food and Drug Administration (FDA) guidelines for its use. It is based on the number of patients on ventilators, the most severely ill and clinical best practices.

Georgia hospitals receiving remdesivir reported 10 or more COVID-19 positive patients on ventilators, in addition to patients currently being treated with extracorporeal membrane oxygenation (ECMO), a machine that takes over the work of the heart and lungs. These criteria are subject to change based on the availability of remdesivir and the development of patient care at hospital facilities across the state.

“DPH is pleased to have the opportunity to share this promising treatment with hospitals on the front lines in the fight against COVID-19,” said Kathleen E. Toomey, M.D., M.P.H., DPH commissioner. “While this drug is not a cure for COVID-19, getting it into the hospitals and improving patient outcomes is moving in the right direction.”

Georgia has received a second, much larger allotment of remdesivir. DPH was in the process of surveying hospitals statewide over the weekend to determine need. This second allotment will be distributed next week, the news release indicated.

Gilead Sciences, Inc. committed to supplying approximately 607,000 vials of the experimental drug over the next six weeks to treat an estimated 78,000 hospitalized COVID-19 patients under an emergency use agreement (EUA). The donation to the United States is part of 1.5 million vials of remdesivir the company is donating worldwide.

"Remdesivir has not been approved by the FDA for widespread use because it is considered investigational and it is still being studied," according to the news release. "Remdesivir was originally developed for use against Ebola. Clinical trials for remdesivir were done in Georgia at Emory University Hospital."

News
Winder companies among those helping in COVID-19 fight
05.20.20

A pair of Winder companies are among more than 220 across the state identified by Georgia Gov. Brian Kemp’s office that are helping businesses obtain personal protective equipment and other health care supplies to fight the spread of COVID-19.

The governor’s office on Monday, May 18, released an online interactive map and list of companies compiled by the Georgia Department of Economic Development, which provides the location of each company and a user tool to sort supplies by category.

The map can be found online at https://www.georgia.org/covid19suppliersmap. Businesses are encouraged to use the list as a free source. The list remains dynamic, and new businesses will be added periodically, according to a news release.

“When we asked Georgia businesses to aid with needed supplies in our fight against COVID-19, they answered that call. I thank all of the hardworking Georgians and businesses who have made these supplies available,” Kemp said. “We are all in this together, and this new resource will help Georgia companies source the supplies necessary for keeping their employees and customers safe, while remaining open for business.”

If your company can help with critical healthcare supplies and is interested in being included on the Georgia Suppliers Interactive Map and List, please complete the form at https://www.georgia.org/covid19response.