Jackson County doesn't yet have a site for the public to get vaccinated for the Covid virus, according to the Georgia Department of Health.

This week, the state expanded its pool of people eligible for the vaccine to those over the age of 65, but according to some reports, district health offices have been flooded with calls and registrations crashing some of the systems.

The disarray in how the state is getting the vaccine to the public makes Georgia last in the nation for a vaccinate rate, according to Dr. Amber Schmidtke who produces weekly newsletter updates about Covid in the state.

Those living in Jackson County now have to register with the district health office in Athens to get the vaccine. So far, there is no central state website for vaccine registration.

Several pharmacies and medical facilities in Jackson County have been allocated a small amount of the Moderna vaccine, but the status of those allocations is unclear.

The situation has reportedly overwhelmed district health offices who don't have the funds or staffing to do both Covid testing and administration of the vaccine.

Large health care system are administering the vaccine to their staff and pharmacists from CVS and Walgreens are being employed to vaccinate people in long-term facilities, such as nursing homes.

Meanwhile, the virus continues to surge in Northeast Georgia with additional hospitalizations and deaths.

According to Schmidtke, Athens hospitals are being especially hit hard.

"I am especially concerned about region E (Athens-Clarke and surrounding counties)," she said. "They’ve been coping with an overage of ICU bed usage for six days straight now and nearly half of all of their hospitalized patients are being treated for COVID-19. They’ve clearly been trying to overcome this challenge by adding more ICU beds (+11 beds since the start of the year) but even those reinforcements have been exhausted. They remain in an overage, using 114% of their available ICU beds."

Meanwhile, the number of COVID-19 patients at Northeast Georgia Health System (Gainesville-based) remained over 300 during the past week.

As of Jan. 11, the hospital system was treating 341 positive COVID patients, with 83 at Northeast Georgia Medical Center Braselton. NGHS reached a new peak on Jan. 8, when it had 355 positive patients with 94 of those at NGMC Braselton.

Bed capacity remains stretched system-wide, with 698 beds occupied and 40 available. At NGMC Braselton, there are nine available beds with no available beds in the ICU department.

As of Jan. 11, Jackson County has had 340 people hospitalized with the virus.

The virus continues to hit Jackson County hard with an additional 1,133 new cases reported over the last two weeks. That gives the county the highest rate in North Georgia for the second week in a row.

The county set a new record on Jan. 8 with 118 cases confirmed in a single day, a number that does not include those tested with the antigen test. To date, the total number of confirmed cases has topped 6,600 county residents.

The percentage of those testing positive continues to also be high at around 30%, far above the overall state rate of 19.3%.

Deaths also continue to rise with the county not recording 67 known Covid deaths and 10 possible deaths.

Two people died of the virus on Jan. 8, bringing the total so far in January to four deaths, according to state data.

The most recent death reported was of a 41-year-old male with no underlying health conditions, according to state records.

The Jackson County Republican Party and its two representatives on the Jackson County Board of Elections attempted — unsuccessfully — to delay certification of the county's Jan. 5 runoff election at a meeting  on Jan. 8.

In a 3-2 vote, the board of elections voted to approve the election results with GOP representatives Jeff Hughes and Larry Ewing voting against the certification. The two had earlier made a motion to delay certification, a motion that failed.

The moves led to some strong comments during the election's board meeting as county elections director Jennifer Logan called on the board to put aside partisan politics and do the right thing for the voters of Jackson County.

The county's GOP executive committee on Jan. 3 adopted a resolution calling on the elections board to delay Jackson County's certification until after Fulton County had certified its results. Fulton has the state's largest number of voters and is usually the last county to certify its election results. It is also one of the main targets of the state's GOP since Fulton is a Democratic stronghold.

But Jackson County's balloting process has nothing to do with Fulton County, something noted by elections board chairman Eric Crawford.

"Our duty is to Jackson County citizens and that is to certify the election unless for some reason there is to think that there is some error in our results, or something that's been done incorrectly to give us a reason to not certify," he said.

GOP member Ewing reacted angrily to the comments by Logan and Crawford.

"I will not be intimidated by anyone regardless of who he is or a statement that he makes," Ewing said.

Hughes also pushed back on certifying the results, saying he wanted to delay until the county had crosschecked the names of those who voted with a list provided in December by former  county GOP chairman Ron Johnson of 1,140 people in the county who had address changes.

Logan pushed back against that idea, too.

"That's no reason to not certify this election," she said.

After the board voted 3-2 to certify the election, it voted 3-2 to have the county's staff look at the Johnson list to see if there are any names of those with a moved address who voted in the county's Jan. 5 runoff.

Many state and national GOP activists have been pushing an unfounded lie that the Nov. 3 election results that ousted Donald Trump as president was riddled with fraud. Hughes voted against certifying the county's November election results, but didn't give a reason for his opposition.

In another split decision, the board voted 3-2, with Ewing and Hughes opposed, to call for a special election on March 16 for the county's three school systems to hold a SPLOST renewal vote.

Hughes said he wanted to delay the election until some other time when there are other issues to vote for. But Logan said the school systems were within the law to call for a special election and that the elections board didn't have the authority to not call for an election under the circumstances.

The moved had been delayed from December after a technical error was found on the referendum. During that December meeting, Ewing voiced opposition to the idea of a school SPLOST in general.

Officers with the Jackson County Sheriff’s Office responded to two reports of shootings in the county recently.

On Saturday, January 2, around 9:45 a.m. officers were called to an apartment on Hardin Terrace Cir. in Jefferson to the report of a female being shot.

A man in an upstairs apartment told officers he was moving his AR-15 gun from the hallway closet back into his gun safe in a bedroom closet. He said as he was walking towards the safe he took the magazine out and then pulled the charging handle out which ejected a round. He advised he put that round back in the magazine and the charging handle slammed closed causing a round to be fired into the apartment below striking the female.

The female was reportedly lying in the bed when she was shot. She was transported to Northeast Georgia Medical Center in Gainesville for treatment of her injury.

In the second shooting incident on Saturday around 10:15 p.m. Arcade Police Department officers requested assistance on Hightower Trail where a man had been shot in the leg.

The complainant told officers he shot the victim in an act of what he described as self-defense when the victim attacked him.

The victim was transported to Piedmont Athens Regional Medical Center for treatment of his injury. 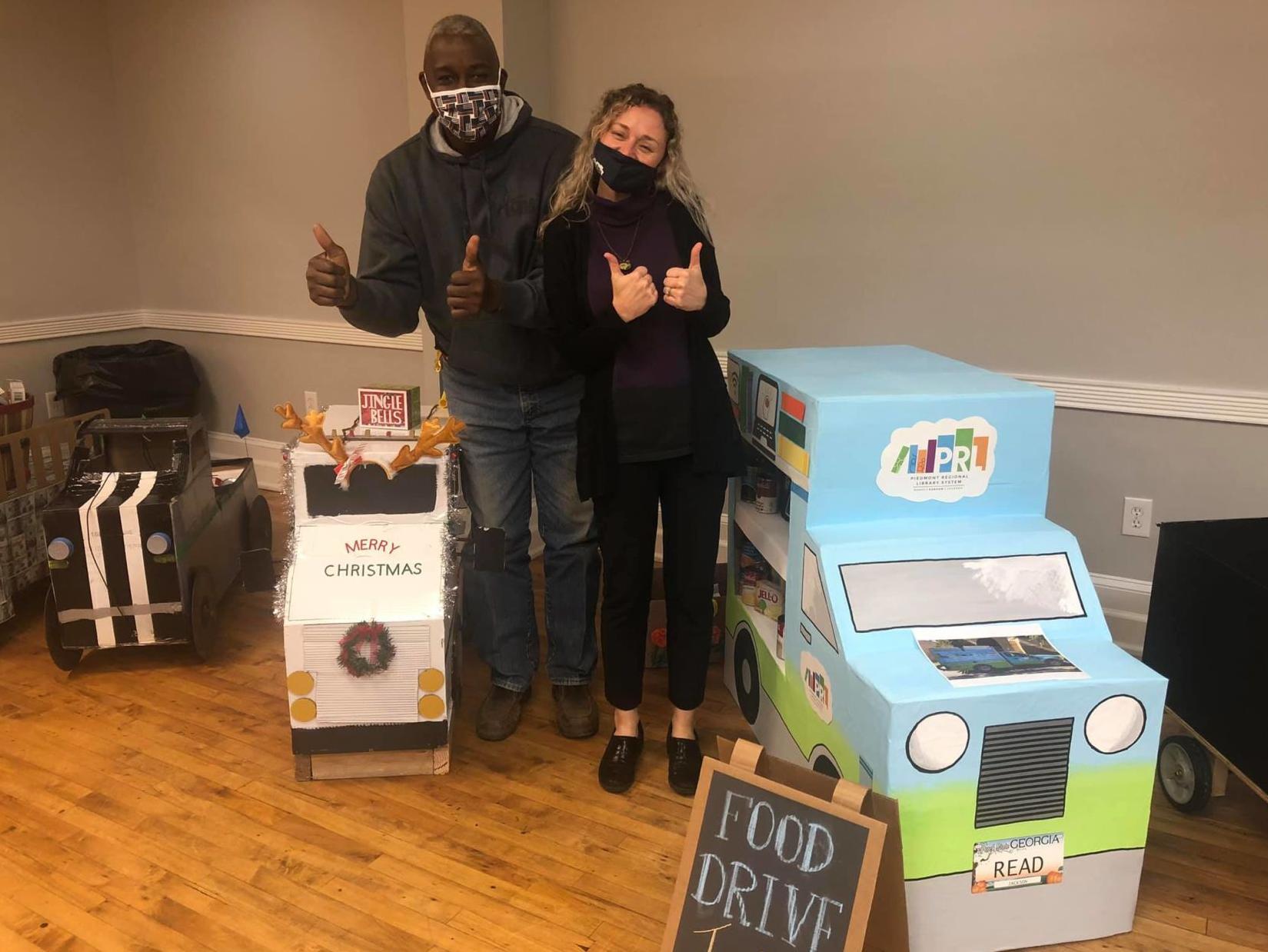 The various departments within the City of Commerce recently challenged each other to collect canned and dry goods for the Commerce Food Bank in a creative way, with each department designing a collection vehicle. "We met the challenge collecting over 200 cans and dry goods," city leaders said. The Commerce Public Library and the city's gas department won the overall decoration contest. "This was a hard decision since they were all creative," city leaders said. "Thanks team Commerce for giving back." Photo courtesy Main Street Commerce

The impact of the Covid virus on the Jackson County School System is worse now than was in December, leaders say.

Because of that, the system has moved its middle and high schools to all remote learning through Jan. 25. The move began Jan. 11 following a major uptick in Covid cases hitting both students and teachers.

"Our student cases have markedly increased, and our staff cases are the highest since the onset of the pandemic," said superintendent April Howard. "In addition to our teaching staff, our school nutrition staff, transportation staff, and substitute teachers are being impacted, making staffing our schools and transportation department not feasible in some locations."

In a report to the Jackson County Board of Education last week, superintendent Howard said some of the system's schools are "close to the breaking point" when it comes to finding enough staff to man classrooms.

The situation has become critical despite the system's move to a hybrid, alternating in-person class schedule it began Jan. 4 after returning from the holiday break.

"Prior to the holiday break, we had 62 active positive COVID-19 cases," Howard said. "Now, as of three days into the new semester, we have 85 NEW active positive cases as well as numerous reports of students and staff symptomatic and awaiting test results."

Each day last week, the system reported having over 20 positions it could not fill with substitutes, much higher than its normal rate.

A large industrial project in Commerce is set to go before a state review process.

The proposed project, “Dakota Commerce,” would include two or three industrial buildings on 214 acres at Yarbrough Ridgeway and Ridgeway Church roads.

“The proposed project is built-to-suit, with building sizes up to 1,168,570 square feet and 910,000 square feet,” according to the development of regional impact submission to the Georgia Department of Community Affairs.

Developers plan to request annexation into the City of Commerce and rezoning for the project.

If approved, the project could be completed in late 2024.

The estimated value at build-out is $80 million with annual local tax revenues estimated at over $1 million.