People flocked to Hurricane Shoals Park on Saturday as county parks and recreation facilities began to reopen for public use.

Jackson County Parks and Recreation facilities have reopened this week. Facilities reopened May 18, including all fields, restrooms, walking areas, playgrounds, as well as, some indoor facilities.

"In conjunction with the Governor’s orders, all patrons must maintain social distancing and follow the guidelines issued by the CDC," said county manager Kevin Poe. "JCPR staff will be sanitizing restrooms two times per day and the playgrounds once per day."

"We are excited to be able to allow our citizens to enjoy our great parks in Jackson County once again," he said.

One of Jefferson's most historic industry buildings could get a major makeover following action on May 18 by the Jefferson City Council.

The council approved a variance for the former Jefferson Cotton Mill to be redeveloped into a multi-use facility.

Although parts of the the former textile plant are currently being used by several businesses, including a furniture store, an antique store and an event center, the project proposed by Blue Frog LLC would be a major redevelopment of the facility. It would include a home for The Jefferson Church, loft apartments, businesses, an event venue and restaurants.

The variance request was to reduce the amount of parking mandated by city codes for the various businesses to be developed. The council also approved the closure of several streets in the area as part of the proposed project: Railroad Avenue from Lee Street to the railroad, and McKensie Avenue from Cobb Street to Epps Street. The project will include the re-paving of Epps Street from Lee Street to Lynn Avenue with the addition of sidewalks on one side of the street.

The mill dates to the late 1800s in Jefferson and over the decades, became a powerful social, cultural, economic and political institution in the community. Like a lot of small, Southern towns in the early to mid-1900s, Jefferson became a "mill town" where life largely revolved around mill activities and resources.

It survived the Great Depression and after WWII, underwent expansion. That included the mill developing a "mill village" area for workers and providing funds and leadership for city cultural projects, such as a city pool, a day camp and the creation of the high school football stadium. The mill was also a critical part of helping rural citizens transition from an agricultural background into the industrial workforce in the post-WWII era.

The Bryan family, which owned the mill, also put funds into the Jefferson City School System and provided school board leadership for many decades.

But the textile industry in the South, and the nation, suffered with the advent of off-shoring production to Mexico, China and other countries, a movement that began in the 1980s. By 2000, a lot Southern textile mills had closed due to the changing economic forces and increased globalization of textile manufacturing.

•approved a re-zoning for Dry Pond Industrial Holdings, LLC from LI Conditional to LI Conditional to modify a condition of zoning previously approved limiting wall signage on any building fronting Interstate 85 for a proposed warehouse.

•approved a bid of $227,480 from Caldwell Electrical Contractors, Inc., Gainesville, for the installation of six stand-by generators.

•unanimously approved a tax levy resolution for the Jefferson Board of Education to refinance its bond to lower the rate from 2-percent to .89-percent.

Long-time Jefferson School System superintendent John Jackson tendered his resignation May 14 after 23 years in the position. He is among the longest-serving superintendents in the state.

Assistant superintendent Donna McMullan was designated by the board to become the system's superintendent starting July 1. The board has to announce its decision 14 days before taking final action.

BOE chairman Ronnie Hopkins said the BOE may have a called meeting toward the end of May to take final action in naming McMullan.

Jackson, who retired once before and came back to the system under the 49 percent system, said he felt it was time for someone who has more technology experience to take over the jobs.

Jackson said that education was today heavily intertwined with technology and that technology is "not in my wheelhouse."

"It's time to hand off to someone who knows more than I do," he said.

"It's time for me to step out of the picture," he said.

Jackson has been in education for 47 years with 45 of those in administrative positions. In the 1980s, he was principal at Jefferson High School before moving on to other jobs, eventually returning as superintendent 23 years ago.

Jackson said the long continuity of Jefferson's leadership was key to the system's overall success, noting that three current members of the board of education were there when he was hired. Two other members of today's BOE were students at JHS when Jackson was principal there.

In other action at the BOE's May 14 meeting, the board:

• heard that the system had received $180,600 from the federal CARES act due to the impact of the COVID virus.

• approved the sale of some surplus math books.

• agreed to refinance some existing bonds at a lower interest rate of .89%, down from 2.4%.

• agreed to proceed with a re-flooring project for part of Jefferson Middle School.

• agreed to re-roof part of the second grade wing at Jefferson Elementary School.

• heard that a ranking service had rated the Jefferson School System number five in the state. Jefferson High School was also ranked in the top seven percent of high schools in the nation by the U.S. News and World Report for 2020. 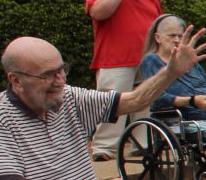 Residents of Hill Haven Nursing Home waved and smiled as family members and friends passed by in a parade for them last week.

Seniors at Commerce High Schools will have a modified graduation ceremony this week on Friday, May 22 at Tiger Field at 8 p.m.

Each graduate will receive five guest tickets that they can distribute to family and friends.

“We will follow all social distancing guidelines, including the six foot rule for everyone and everyone will wear a mask,” principal Will Smith said. “The ceremony will be live streamed so everyone can see your accomplishment.”

The 88 graduates will be placed six feet apart on the field.

Law enforcement will be present to help ensure safe distance requirements are followed by those in attendance and the number of people on the field with the graduates will be limited. Attendees will be required to wear a mask. SK Battery donated 1,000 makes to the school for the event, officials said.

In a Facebook post from the system, superintendent April Howard said that state and CDC rules won't allow a full-scale ceremony as is traditionally  done for graduating seniors.

As a part of celebrating the senior classes, the system will host two graduating parades this week. Parade ceremonies will be held Thursday, May 21 for EJCHS students and on Friday, May 22 for JCCHS students.

Seniors will also receive a survey this week about possible future events to celebrate their graduation.

Seniors at Jefferson High School will also hold a graduation parade on Thursday, May 21, starting at 8 p.m. Graduates will drive from the high school parking lot around the academy, middle and elementary schools and back to the high school. Spectators are invited to line the route along Old Pendergrass Rd., Dragon Drive and Hoschton St. for the event. 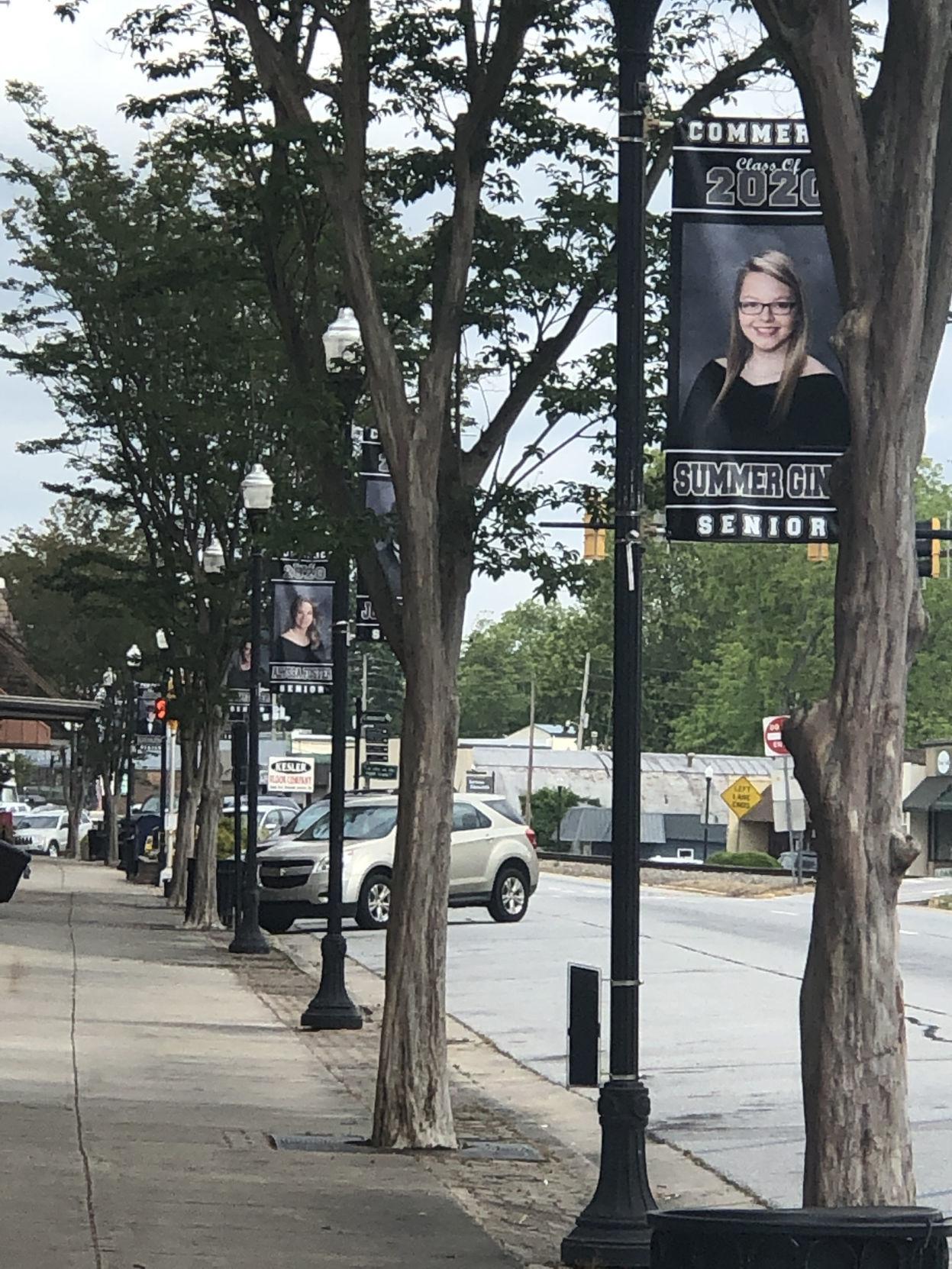 Commerce High School recently teamed up with the Commerce Downtown Development office to honor the senior graduating Class Of 2020 in a way that everyone could enjoy downtown. Together with the help of local business Fit To A Tee, banners were printed for each senior and staff from city’s public works department hung the banners on the lamp posts on Elm and Broad streets.

Phillip Powell has been hired as principal at Commerce Middle School starting with the upcoming school year.

Powell and his wife, Joni, live in Commerce with their two children. Son Shan is currently a senior at CHS and he will be attending Kennesaw State in the fall. Daughter Anna Kate will be a freshman at CHS in the fall.

In other personnel moves in the Commerce School System, the BOE recently voted to rescind an offer to Shawn Keim to be the system's curriculum director due to budget cuts in the system.

The board also approved the hiring of Tiffany Barnett as assistant principal at CHS; Mona Proulx as director of instructional technology, gifted coordinator and TKES/LKES coordinator; Layna Oliver as a 5th Grade math teacher; and Dena Voyles as a special education teacher at Commerce Primary School.

The board also accepted the resignations of Lauren Ledbetter and Hallie McElvery, both  paraprofessionals in the system.

The number of COVID cases has started to show some slowing in the state and locally.

Jackson County reported 132 confirmed cases with 25 people having been hospitalized and three deaths as of Tuesday, May 19. The number of confirmed cases is expected to go up as testing become more available.