Barrow County interim manager Kevin Little has had the “interim” tag removed from his title and will now formally be at the helm.

The county board of commissioners approved the hiring of Little as full-time county manager following a closed session during a called meeting Friday, March 26.

“I am truly excited and humbled to be named Barrow County manager,” Little said in a statement. “I look forward to working with the Barrow County Board of Commissioners, along with the (county) employees, to continue the successes that are taking place here.”

Little had been serving as interim county manager since January, when he took over for former county manager Mike Renshaw, who was hired to a similar local-government management position in a suburb of Denver, Colorado. Little, a native of Walton County, previously served 20 years as chairman of the Walton County Board of Commissioners, an elected position that is also the county’s top administrative post. He chose not to seek a sixth term last year.

The county advertised the position, though Little was the only applicant for it, human resources director Elizabeth Bailey said Monday, March 29. She added that Little's contract and salary details were being finalized and that the contract effective date is Thursday, April 1. In his interim role, Little has been paid an annual salary rate of $115,000 and also received a $3,100 signing bonus.

Little has 30 years of government experience, including three years as an engineer technician for the Georgia Department of Transportation and a stint as director of traffic operations and assistant road superintendent for Walton County prior to his time as commission chairman. He holds a bachelor’s degree in public administration and political science from Georgia College. He and his wife, Wendy, have four adult children.

“We look forward to working with Kevin Little,” Barrow County BOC chairman Pat Graham said in a statement. “He is extremely knowledgeable in all aspects of county government. He is a great addition to our team.”

An aerial view of the Victor Lord Park expansion. The new facilities opened to the public in October.

Leisure services director Dan Magee told the county board of commissioners during a work session last week that the department would like to have an agreement in place for a parent association-led football league in time for the fall season.

Magee said a “solid” working group of people has been formed to kick off the football association planning, though more volunteers will be needed to form an ideally-sized initial board and set up working bylaws. The association would be set up and operate in similar fashion to the Piedmont Soccer Academy, which has had success and gained popularity in Barrow County, and other associations around northeast Georgia and in Gwinnett County, Magee said.

Once a football association has been established, the county would turn its focus to setting up similar operations for baseball and softball (the other two most popular youth sports in the county) and then others from there, he said.

“Football is the one to conquer first. That’s Mount Everest,” Magee said. “(Once a football association is established), that makes the other ones easier to address.”

Barrow County has placed a heavier financial focus on recreation in recent years after accepting a 32-acre donation from the state to expand Victor Lord Park. The more than $10 million, voter-approved SPLOST project has provided additional athletic fields and tennis courts, and commissioner Joe Goodman said the next focus should be boosting the programming and increasing the opportunities for outside support in the community.

“Barrow County is growing by leaps and bounds. Our programs continue to get bigger,” Goodman said. “One of the biggest issues we face is trying to accommodate all the kids.”

Goodman said having parent-led associations in place for the various sports would ease some of the burden on the leisure services department when it comes to dealing with issues with uniforms and equipment and other matters that pop up in sports leagues and will allow the department to focus more effort on the facilities themselves.

Parent associations also have more flexibility to solicit funding from local businesses, Goodman said. The funding donations for the associations would likely run through the nonprofit Barrow County Community Foundation, which he said would likely be more appealing to businesses. Magee added that the community foundation setup would provide additional “checks and balances,” in light of an incident where the then-treasurer of the Barrow County Youth Soccer Association was arrested for stealing more than $50,000 from the organization over a nine-month stretch between June 2015 and March 2016.

Officials said the shift to associations will likely help the county reduce its fee schedule for youth sports as well. Fees would still be charged to help cover insurance and facility maintenance, but more of the equipment costs could be passed on to the associations through bulk purchases from companies at more favorable rates, officials said.

With enough business sponsorships, associations could also help offset some of the costs for families who have trouble affording the equipment for their children to play sports, said Mason Goodman, Commissioner Goodman’s son who has served as a volunteer youth football coach in the county.

Magee said that would depend on the level of sponsorships and buy-in from community businesses and organizations, but that it might at least help keep costs stable for an expensive sport such as football.

“Ideally, you get it to a point where the family pays the rec fee and then the kids in need are equipped, so you create a system where kids that never would have had the opportunity to play now have that opportunity,” the younger Goodman said. “It’s no secret that Barrow County has a tremendous amount of athletic talent. I believe there’s an opportunity to create something here that can last for years.”

Commissioner Goodman and BOC chairman Pat Graham said they believe the willingness will be there among local businesses to provide more financial support for youth sports in Barrow County.

“I know it’s a daunting task to shift from the way we’ve always done it to a new model, but I really do think the county’s resources will go further toward providing better facilities if we shift to an association model,” Graham said. “I think it does make sense to do one sport at a time so we can build on our successes. And I think it’s important to get the association going and then let them run with it.” 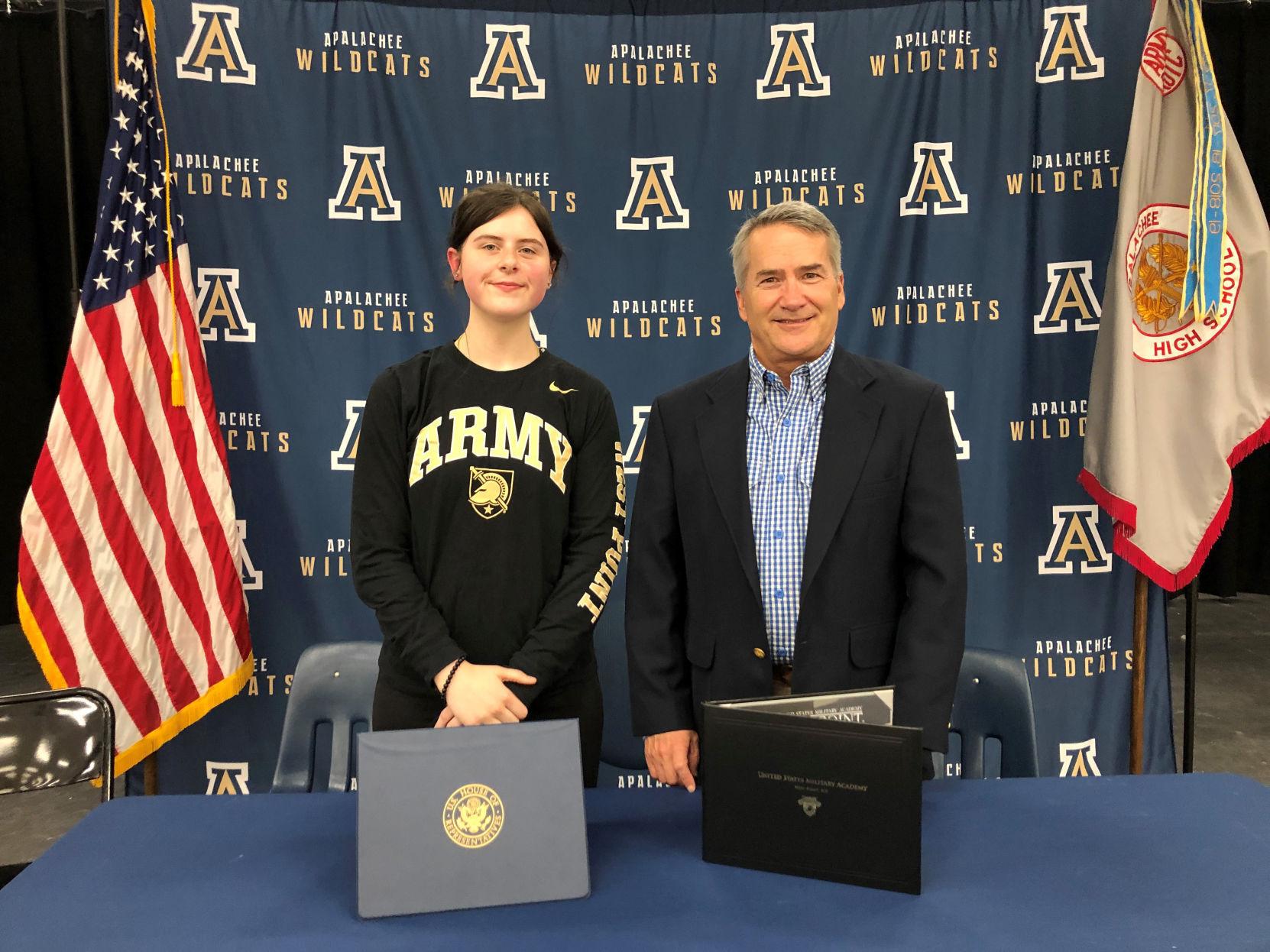 On Thursday, March 25, Congressman Jody Hice held a signing ceremony for Abigail Bugg, a senior at Apalachee High School who has accepted an appointment to the United States Military Academy at West Point. Abigail, the daughter of Brooke and James Bugg of Monroe, will enter the academy in June and upon graduation will become a commissioned officer in the United States Armed Forces.

A bill aimed at letting family members visit their loved ones in Georgia hospitals and nursing homes during emergencies like the COVID-19 pandemic cleared the state Senate Monday, March 29, after being gutted last week.

Sponsored by Rep. Ed Setzler, R-Acworth, the bill originally would have blocked hospitals and long-term elderly care facilities from limiting patients’ ability to visit with family members in the event treatment or hospitalization lasts more than 24 hours.

It was scaled back to permit only legal representatives and caregivers who could include family members to visit loved ones for short amounts of time, marking a compromise with health care and nursing home professionals wary of opening their doors during infectious-disease events like COVID-19.

But last week, Setzler’s bill was stripped of even that watered-down provision by members of the Senate Health and Human Services Committee — which includes a half-dozen doctors and health-care workers — to only require that hospitals and nursing homes follow federal rules for allowing outside visitors.

“This bill gives hospitals and long-term care facilities absolute, complete control over their visitation policies,” Setzler told the committee at a March 24 hearing. “This bill [as amended] has nothing to do with visitation.”

Setzler’s gutted bill passed by a 49-2 vote on Monday and is likely to undergo further changes in what’s called a conference committee before it can gain final passage.

Parts of Setzler’s original visitation bill could be tacked onto other pieces of legislation still alive in the 2021 legislative session before the General Assembly shuts down shop this Wednesday.

Supporters have argued Setzler’s original bill would relieve the despair families have faced during the COVID-19 pandemic, when dying loved ones often were reduced to spending their final moments with family via phone calls for live video and not in person.

They call the visitor-allowing measure one of the most important legislative actions they can take this year after fielding thousands of requests from constituents to loosen hospital and nursing-home visitation rules amid the pandemic.

“This bill may not be perfect,” said Sen. Greg Dolezal, R-Cumming, at last week’s committee hearing. “But I think if we go back to the status quo of what we lived through the past year, that is also far from perfect.”

But the bill drew some backlash from hospital and long-term care representatives who worry an influx of visitors could weaken safety protocols and run afoul of federal rules on allowing visitors during emergencies.

Currently, Georgia allows visitation at nursing homes and long-term care facilities based on levels of COVID-19 positivity rates in a given community.

“When we hear such significant, resounding messages from our medical community and our health community … I find it impossible to walk away from that body of evidence and advocacy on their part and pass anything other than [the gutted bill],” said Sen. Nan Orrock, D-Atlanta, at the March 24 hearing.

More than 849,000 people had tested positive for COVID-19 in Georgia as of Sunday afternoon, with nearly 206,000 more reported positive antigen tests indicating likely positive results. The virus has killed 16,487 Georgians.

The Barrow County Farmers Market will open April 10 and continue every Saturday through Nov. 20, from 8:30 a.m. to 12:30 p.m. The market is located behind the historic Barrow County Courthouse in downtown Winder.

The market has expanded to include more local farmers with their locally-grown produce, beef, and sausage and eggs, as well as baked goods, honey, coffee, herbs, plants, jams, preserves, soaps, candles, lotions, and locally sourced crafts, organizers said. At least 22 vendors are scheduled to be at the grand-opening.

The market is dog-friendly and will have a vendor selling dog treats, made from locally spent grains, once a month, organizers said.

Educational booths, community outreach booths, children’s activities and, in the near future, cooking demonstrations will be offered at the market, organizers said. Another addition is that the market is now authorized to accept SNAP/EBT benefits this season.