Citizens questioned county leaders Tuesday night about their plans for the future of the county.

Banks County citizens questioned county leaders about what the economic direction of the county is, the role and background of the members of the development authority and the job duties of the newly-hired economic director for two and half hours Tuesday night.

More than 50 citizens attended the meeting, called by the Banks County Board of Commissioners at the request of several citizens who are concerned about the “rural character” of the county being lost to development.

Most of the questions were directed at Banks County Development Authority chairman Scott Ledford, who has served in that volunteer role for 12 years, and economic director Richard Brooks, who was hired six months ago but only began serving on-site three months ago due to the pandemic.

The first questions from the citizens dealt with the names of the development authority members and what role they have. Ledford went over the members of the authority and said they are all appointed by the BOC and the BOC has the power to take any action.

When asked what kind of businesses the development authority wants to bring in, Ledford stated “high tech jobs” along the I-85 corridor.

“We don’t want a hodge podge of businesses and that is what we have been accused of,” he said.

One man in the audience asked, “Is bringing in industries squeezing out agriculture businesses? I’m a farmer. I need land to farm. If things keep going like they are, there won’t be farming here. Banks County is rural. It is an agriculture place. What is happening here is destroying it.”

Ledford replied, “We want to protect this community. We don’t want a massive amount of growth.” He added Brooks’ job is to “mediate the growth” that is coming to Banks County.

One of the main topics at the meeting was the direction the county leaders want to see Banks County take in the future.

Commissioner Keith Gardiner said, “I hope to see Banks County where we are now. Maybe a little more growth at the interstate.”

BOC chairman Charles Turk stated, “There is no need in hollering at us and making accusations. I personally want it to stay rural. Don’t think we are trying to turn this into Gwinnett County. We would never turn it into that. We have consistently turned stuff down. We are trying to slow things down.”

Turk said he would like to see “a grocery store and more retail” in the county.

Several questions were asked by the citizens about the June 2 planned virtual meeting with businesses in Canada. Brooks said this is a “networking event for like-minded businesses.” He said all of the counties along I-85 from Hart County to Gwinnett County would be participating.

There was also a question as to whether this meeting can be made public and viewed by citizens. Commissioner Turk said county officials would check and see if it can be viewed on social media or recorded and posted.

There was a question from several members about a development authority member, who was not named, and whether he resides in the county or not.

Commissioner Gardiner said, “I do not know who you are talking about but if there is somebody not living in Banks County they are coming off of the authority.”

Ledford addressed the question as to why “someone from Canada” was hired to lead Banks County’s economic development. Ledford said that he believes Brooks’ background, including his work in sewer and water projects and economic development and his degree in environmental engineering, made him the best candidate for the job.

At the meeting's conclusion, commissioner Garrison pointed out that moratoriums are in place on subdivisions and apartment projects in the county until the zoning ordinances are reviewed.

“We have heard what everyone said and we will take it to heart,” he said. “We are going to work for y’all. We need to sit back and take a deep breath and absorb it all. We are all in this together. We all want the same thing.”

It was standing room only Monday night, May 17, when the Lula City Council held its last public hearing on a Planned Residential Development. When the issue came to a vote at the council meeting, members decided to table any action until June.

Frank Norton, Jr, of Norton Capital, Inc, introduced the plan to create a “village” of 36 (later amended to include 24) rental homes on 4.04 acres on Moon Drive which is currently zoned R-2. There are many amenities in the project, including front porches, a central park, pavilions, playground, fire pits, along with sidewalks around and throughout the property.

Over time, Norton has been willing to amend the proposal in several ways. There are 37 conditions, including a decrease of two-bedroom dwellings from 36 to 24. The 1,360 square foot houses will rent for $1,200-$1,400 a month.

While two citizens spoke in favor of the project, many citizens spoke against the project. Person after person cited the impact the project would have on water, sewer, garbage, crime and an elementary school they say is already packed with students. Another major concern is traffic and safety.

“Lula needs to grow, but this is not the area to put that many houses," Martha Morris said. "Traffic is already horrendous."

Jessica Gunter pointed out safety concerns. She said the response times for emergency vehicles can be hindered if a train stops in Lula. When that happens traffic is at a standstill, and the vehicles could not get to the location. Presently, the bridge over the tracks is closed, and those vehicles could not pass through the one-lane underpass.

Norton addressed these issues. They complete background checks on rental prospects, and considering the rental costs, he says their target market is young professionals including those in healthcare, public safely and teachers.

“This is a jumpstart for downtown Lula," he said. "You are sandwiched between 365 and 985 and explosive growth is coming.”

City manager Dennis Bergin read all 37 conditions noting that the council has not taken this application lightly.

“We want a quality development,” he said. “They have been forthright with all of their submittals. This is a tool for the city to manage growth.”

He also explained that council members must abide by the zoning laws in the city and the state. Throughout the evening several people talked about the present property zoning of R-2.  Under current regulations, someone could build 24 houses right there without the playgrounds, fire pits, pavilions.

As councilmembers began to discuss the issue, it was apparent there could be differing opinions.

Councilmember Lamb Griffin spoke out, “Those are the people who elected us,” as he pointed out to the crowd.

Councilmember Garnett Smith echoed Griffin. “Those people showed up tonight and they don’t want it.”

That is when Matt Hamby made a motion to table the issue until the June meeting, and all members approved. 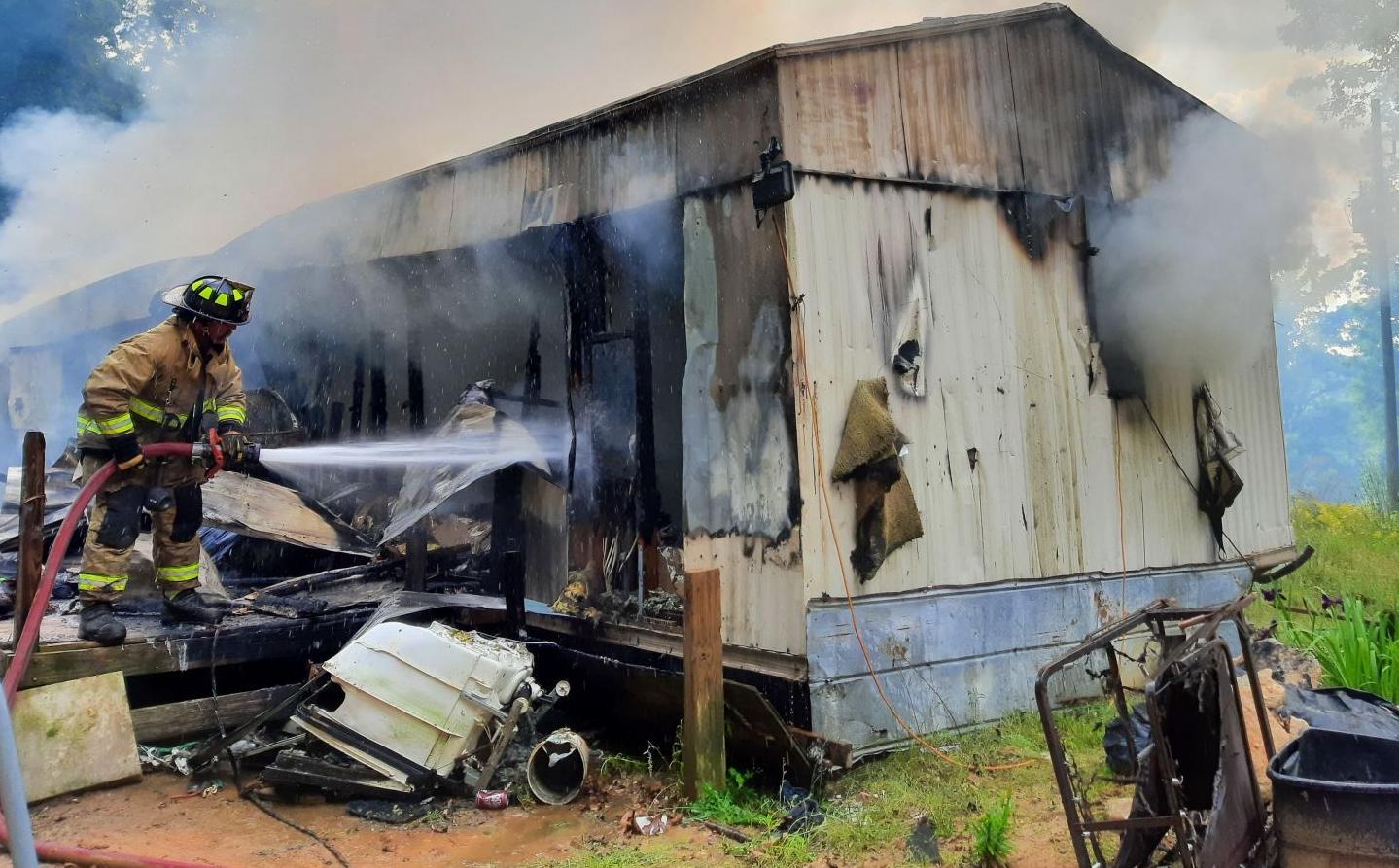 A Commerce residence was totally destroyed in a fire on May 16. The Banks County Fire/EMS responded to 235 Alexander Road on a reported structure fire. Upon arrival, firefighters found a single-family residence that was fully involved with fire. The structure was listed as a total loss. A defensive fire attach was initiated to keep the fire from spreading to a wooded area and a home nearby. No injuries were reported and the cause of the fire is under investigation by the Banks County Fire Department.

A virtual option will not be offered the next school year by the Banks County School System.

Students will be required to attend school in person.

“It’s not the best option for our kids,” assistant superintendent of instruction Joy Edwards stated at the May 13 meeting of the Banks County Board of Education.

The BOE approved several personnel items when it met on May 13, including the following:

In other business at the meeting, the BOE approved a $288,992 bid to complete the roof project at the middle school.

Rope Roberts with Georgia Power will provide an overview of Banks County and the development possibilities and how Georgia Power can aid in the process.