An Atlanta-area developer has scrapped the townhome component while adding about 60 single-family homes to a proposed large subdivision of over 500 homes on the western edge of Barrow County. But it will be at least several more weeks before a final decision is made on whether the project can move forward.

For a second-straight meeting Thursday, May 20, the county planning commission voted to table a request by Ashton Atlanta Residential of Alpharetta and property owner Greg Low to rezone 328 acres of a large swath of open land at 979 Tom Miller Rd., Bethlehem, so that county planning staff can have more time to review and comment on a revised site plan that was submitted a few days prior to last week’s meeting. The county will also advertise for a second public hearing on the request, which will be held during the planning commission’s next meeting June 17. The panel’s recommendation will then go before the county board of commissioners July 13 for a scheduled final vote.

The bulk of the subdivision would run along the western side of Tom Miller Road, with some homes slated to be built along the eastern side.

County planning staff had recommended approval of the request with several attached conditions — including that single-family detached homes be a minimum of 2,000 square feet with no vinyl siding, that the developers avoid a monotonous appearance of homes and that there be minimal disruption to existing water bodies and streams on the property.

The request drew opposition from several neighboring residents at an April 15 public hearing due to concerns over traffic and the potential impact on capacity at nearby schools (Yargo Elementary, Haymon-Morris Middle and Apalachee High). Homeowners from the neighboring Kensington subdivision said they would prefer to see the subdivision built without townhomes and proposed that Tom Miller Road be re-widened and that a traffic signal be placed at Ben Johnson Road. A representative for the developer said they were willing to sit down with residents to attempt to work through their concerns, which prompted the planning commission to table the request for the first time last month.

Interim county planning director Rebecca Whiddon said the elimination of the townhomes appears to be the primary major change to the proposal.

In other business Thursday, the planning commission:

•recommended approval of a request to rezone 24.3 acres at 161 Pickle Simon Rd., Winder, in order for a 23-lot single-family subdivision to be built. The recommendation comes with the conditions that homes be a minimum of 2,000 square feet with no vinyl siding and that all plats and deeds transferring ownership disclose that the property is in close proximity to the Barrow County Airport and that residents may be subject to loud noises from airport operations. The panel’s recommendation now heads to the board of commissioners for a final vote at its June 8 meeting. 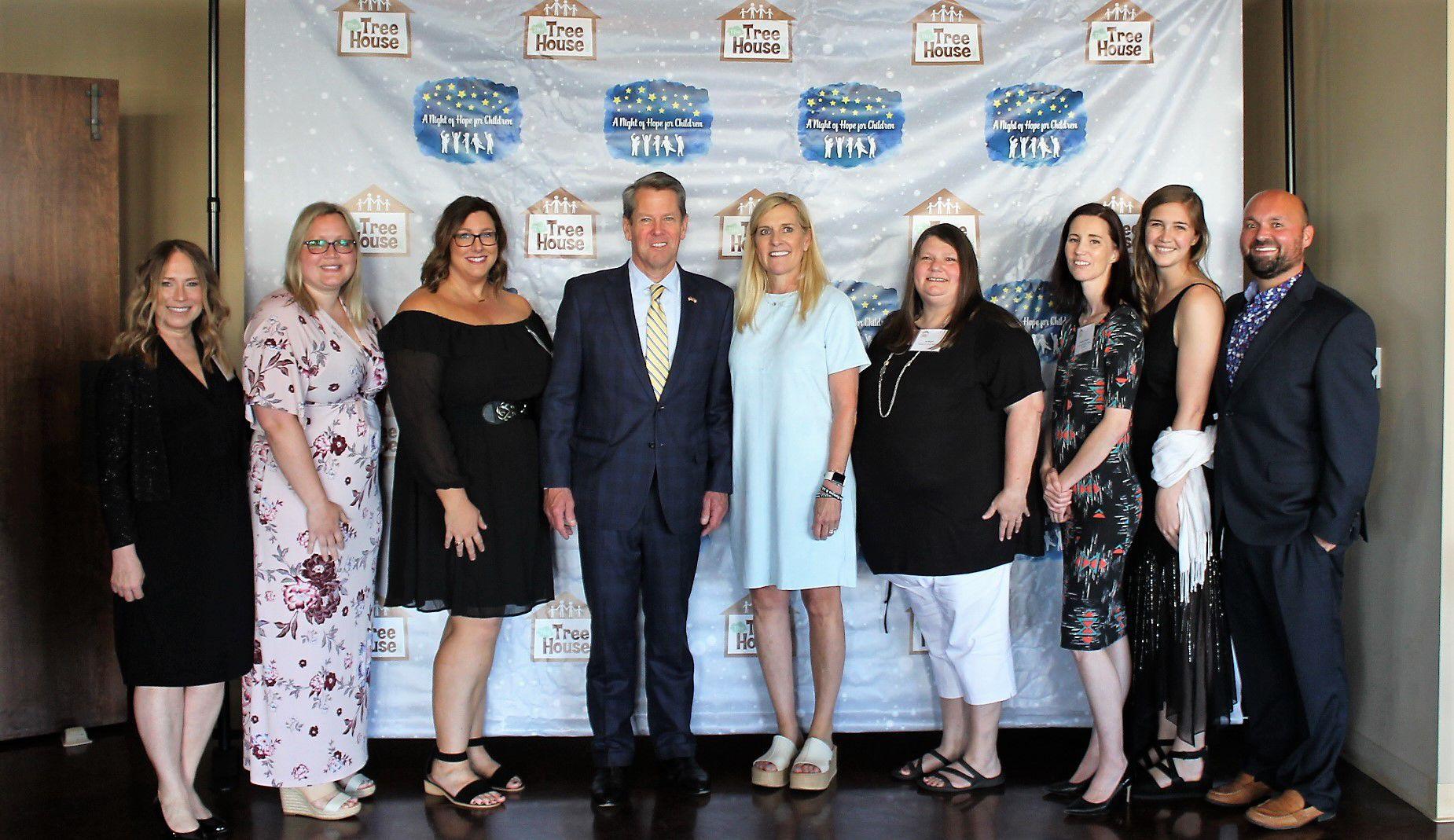 Tree House Inc., a Winder-based nonprofit whose mission is to prevent child abuse in Barrow, Jackson and Banks counties, raised over $110,000 through its annual “A Night of Hope” live and silent auction, held Friday, May 21, at The Venue at Friendship Springs in Flowery Branch. The event included a surprise visit from Gov. Brian Kemp and Georgia First Lady Marty Kemp (pictured with Tree House staff). 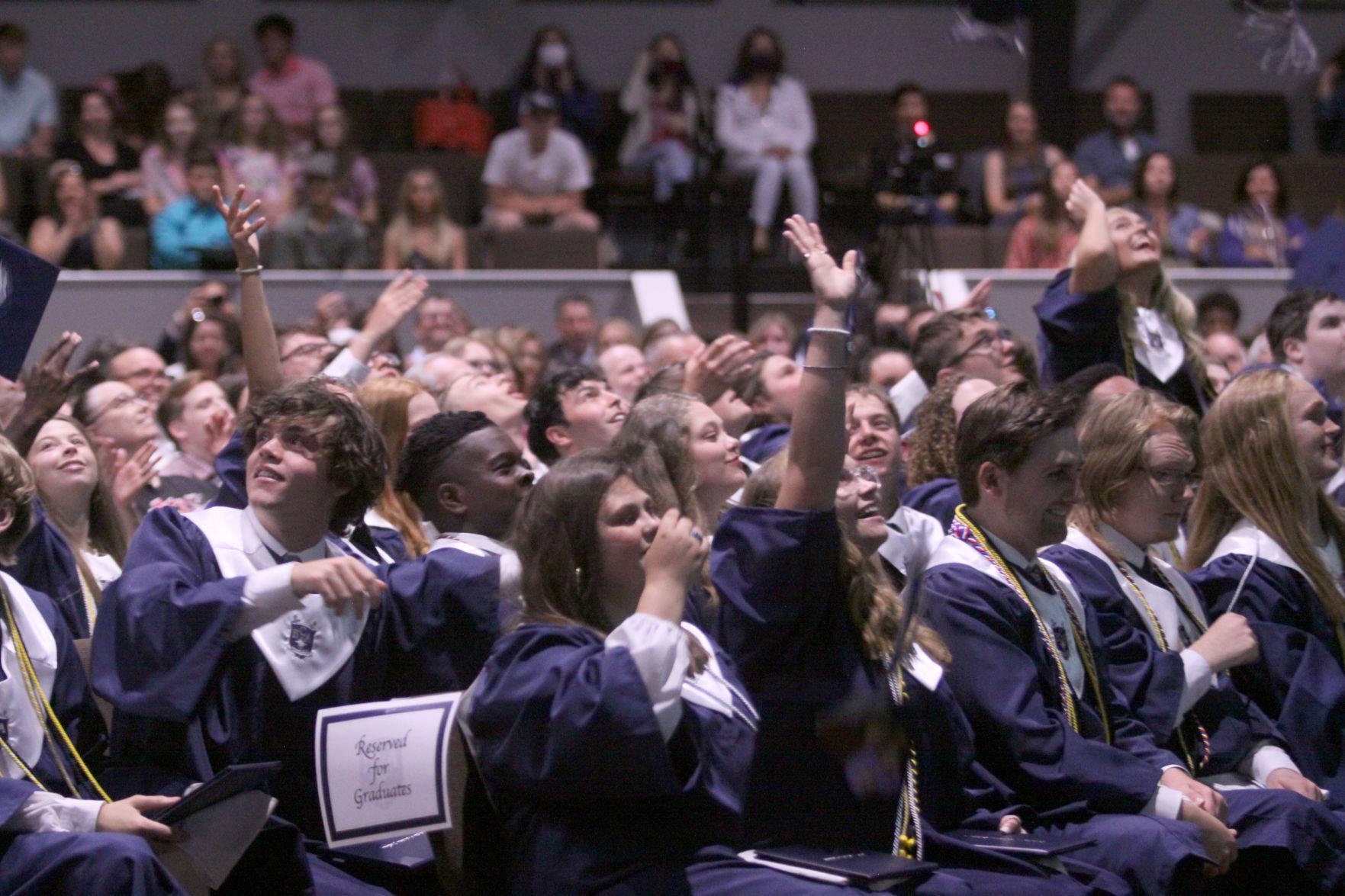 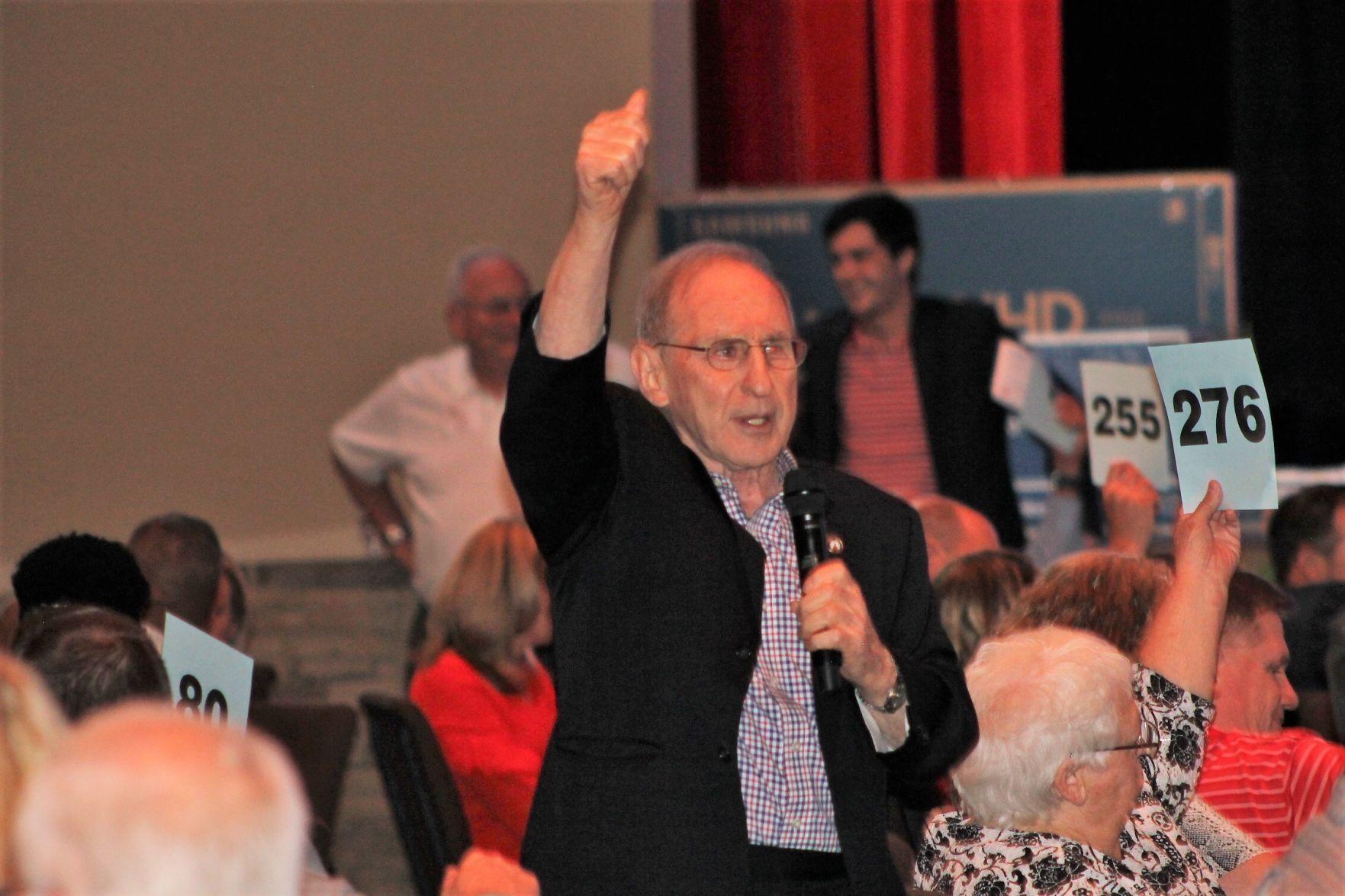 State Rep. Brooks Coleman of Duluth was the auctioneer for the event. 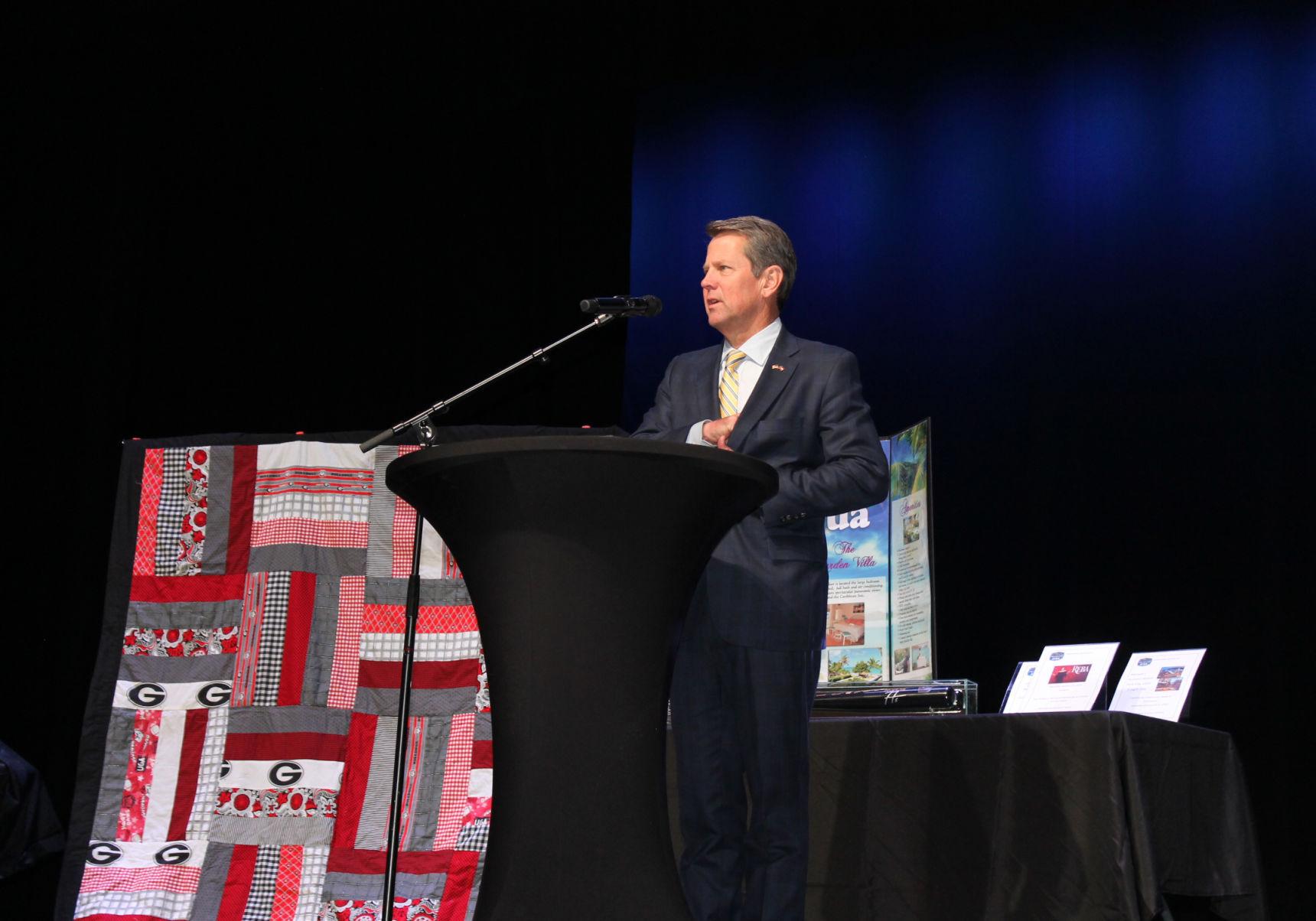 A couple of Memorial Day events are planned this coming weekend in Barrow County.

On Sunday, May 30, the American Legion Post 163 in Statham will be hosting the Shepherd’s Men running group for a fundraiser and lunch at the legion headquarters, 1633 Atlanta Hwy., starting at 1 p.m.

Shepherd’s Men run 22 miles to each stop to bring awareness to the suicide rate among U.S. veterans of 22 per day. They also raise funds for the SHARE Military Initiative at Shepherd Center in Atlanta, a comprehensive rehabilitation program that focuses on assessment and treatment for service men and women who have sustained mild to moderate traumatic brain injuries, along with co-occurring PTSD or other mental-health concerns from post-9/11 military service.

The afternoon event will include a meet-and-greet, food, silent and live auctions, vendors, games, raffles and other activities.

The event will begin at 10 a.m. at the VFW headquarters, 73 Lee St., Winder. Retired U.S. Air Force Col. Patrick Ballard will be the guest speaker.

Coffee and doughnuts will be served after the ceremony.

The Barrow County School System’s millage rate is likely to remain unchanged next fiscal year, with board of education members citing the strain that population growth and numerous additional residential developments will continue to place on the district’s resources.

The board voted unanimously during its Tuesday, May 25 meeting to tentatively approve keeping the millage rate at 18.5 mills, where it has been since 2007.

“It just doesn’t make much sense to me to roll it back at this point,” board member Lynn Stevens said, noting that keeping the rate the same would mean an increase of a little over $6 a month in school taxes to the average homeowner in the county, which board members described as “negligible.”

“With the amount of new homes and (road/traffic) congestion coming, it’s going to add a ton of kids (to the system),” board chairman Bill Ritter said. “We’ll have to add new teachers and continue to add infrastructure within the school system.”

Because there would be a small tax increase associated with keeping the millage rate the same, the board will hold three public hearings — starting with two on June 10 at 10:30 a.m. and 6:30 p.m. and a third at 1 p.m. June 21. The board is scheduled to hold a final vote on the rate at its June 22 meeting.

School district officials had budgeted about $45.7 million in property-tax revenues for Fiscal Year 2022 — a little less than a third of the proposed General Fund budget — but would actually stand to gain an additional $1.9 million by keeping the millage rate at 18.5 thanks to an 8.4% projected growth in the county’s tax digest. Jennifer Houston, assistant superintendent for business services, said those excess revenues would be balanced by moving expenditures either back into the General Fund or under federal coronavirus-relief funds.

The “roll back” rate, where the district would receive the same amount of tax money as the previous year on property that was on the tax digest in 2020, would be 17.637 mills. Houston said the district would get roughly $270,000 less than the property-tax revenues it has budgeted for under that scenario. She said rolling the rate back could mean a loss in state monies a couple years down the road, depending on what action other school districts take with their millage rates.

Also, the board is scheduled to vote on tentative approval of a $68.55 million “other funds” budget for the district at its Tuesday, June 1 meeting. That budget would be in addition to the nearly $142.9 million proposed General Fund budget that board gave tentative approval of earlier this month.

Public hearings on the complete budget are scheduled for 10 a.m. June 9 and 6 p.m. June 16, with a final board vote set for the June 22 meeting.

The proposed “other funds” budget includes $30.8 million in capital-improvement expenses, with $9.5 million slated to go toward prep work for new facilities at the district’s Austin Road property and $8.5 million to be poured into renovations at existing facilities.

The district anticipates receiving $16.3 million in federal funds (not counting school food and nutrition funds, Houston said), including $7.4 million in remaining CARES Act funding and $2.2 million in American Rescue Plan funding. That money from the latest federal stimulus is part of an overall projected $19.9 million allotment for the district, which must be spent by Sept. 30, 2023.

The district plans to make up a $13 million gap between “other funds” expenses and revenues with the use of reserve money.

During a called meeting Tuesday, the board adopted a formal replacement process for District 1 board member Debi Krause, who is resigning to run for a seat on the Statham City Council in November.

The board plans to accept letters of interest and candidacy from District 1 residents over the next couple of weeks and will conduct interviews June 16. The full timeline will be advertised in The Barrow News-Journal, which is the legal organ of the county.

Krause’s final board meeting is scheduled to be next week and, as vice chair, she will chair the meeting due to Ritter’s planned absence.

The board is expected to approve, next week, guaranteed maximum prices of $7 million for pre-grading work at the district’s Austin Road property for a future elementary school, new middle school and athletic facilities, and $2 million for pre-grading of a smaller section of the campus for the second phase of Barrow Arts and Sciences Academy (BASA).

The board previously approved an architectural firm for both projects as well as a separate construction firm for each project, and those companies have performed several “due diligence” tasks, including surveying, soil analysis, preliminary drawings and budgeting work, said Joe Perno, assistant superintendent for system operations. Perno said that, in addition to earthwork, the pre-grading phase will include design of site retaining walls, utility pathways and storm sewer infrastructure.

The pre-grading will be funded through a combination of SPLOST and CARES Act monies.

The work will come as district officials have put forward a tentative timeline for an opening of the new facilities over the next few years.

Perno said the new elementary school is targeted for a fall 2023 opening and would be the top priority due to significant overcrowding at Kennedy and Yargo elementary schools. Phase II of BASA would be opened in the fall of 2024, and the new middle school would be built in time for the start of the 2025-26 academic year, according to the district’s timeline.

In other business Tuesday, the board:

•approved, during the called meeting, the purchase of 180 iPads for $52,920 from sole-source provider Apple for kindergarten Measure of Academic Progress (MAP) testing in the upcoming and subsequent school years.

•heard a recommendation to purchase network switches from low-bid respondent MXN of Woodstock for $43,635. The switches are required for the new wing being built at Westside Middle School and for audio-enhancement installations that are part of renovations at Auburn and Holsenbeck elementary schools.

•heard a recommendation to purchase 250 Goalbook Toolkit licenses to provide guidance to special-education teachers working with specialized student populations. The cost is $75,863 and would be paid for with federal funds.

•heard a recommendation to approve the purchase of $69,233 worth of office furniture for Auburn and Holsenbeck elementary schools and Apalachee High School in conjunction with summer renovation work planned for those schools. The district is also including a $7,000 contingency in its request.

•heard a recommendation to offer the course “Personal Financial Literacy” as a social studies elective at the district’s high schools starting in the 2021-22 academic year.