Five Homer residents have filed a lawsuit against the mayor and city council because they don’t believe they are getting equal representation in the newly-created districts.

Earl Tyson, Annette Tyson, Linda Guabelly, Amanda Acton and Emily Acton, as well as Banks County Golf LLC and Green Ridge Builders of Georgia filed the lawsuit against the Town of Homer, the mayor and each of the council members and the city clerk. The lawsuit is also filed against the Banks County Board of Elections and elections supervisor and registrar Andra Phagan.

District 3 is a newer residential subdivision near a golf course and it contains “a large and geographically compact group of voters,” according to the lawsuit.

The lawsuit also states, “The individual plaintiffs are harmed as residents and voters of the Town of Homer, they are being treated as second-class citizens by Defendants in terms of their voting rights, in comparison with District 1 and District 2 residents and voters.”

Homer has 1,200 residents and approximately 800 voters. 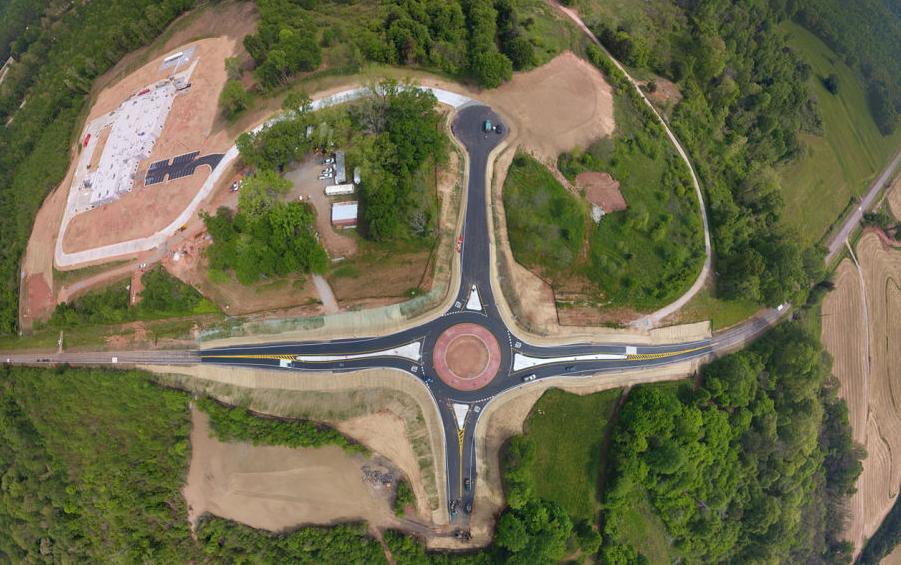 The Hwy. 59 Roundabout is complete. The project was paid for with a GDOT Local Maintenance Improvement Grant and a One Georgia Grant with the Department of Community Affairs, along with the 2017 Special Purpose Local Option Sales Tax. Photo courtesy of and project built by CW Matthews Construction.

The Maysville City Council unofficially agreed on May 3, to provide funds to the town's public library for new computers.

Kim Wilmoth requested money and said the computers are 10 years old and need to be replaced, especially the computers used by children.

"We are in desperate needs of computers at the library," she said. "We need about $10,000 to upgrade the computers. The Friends of the Library have $2,500. I'm just asking for anything you can do. It is sad the situation with our computers. They are slow."

The council asked for a written request and said some money is available in the town's contingency fund.

Mayor Richard Presley said a called city council meeting could be held to vote on allocating funds to purchase computers for the library.

• opened three bids for the purchase of an excavator and agreed in a 3-1 vote to go with the low bid from James Short Tractor for $49,600. Council members Junior Hardy, Kathy Bush and Richard Parr voted in favor of accepting the low bid, while Scott Harper voted against it.

• unanimously voted not to purchase an ad on the map being distributed by the Jackson County Chamber of Commerce.

• agreed to turn over the property deeds for two buildings downtown to the Downtown Development Authority.

• agreed in a 3-1 vote for Cajun Construction to do a sewer line repair off of Ellison Street. Parr, Bush and Harper voted in favor  while Hardy voted against it.

• heard the library report from Shannon Wheeler who reported that the summer reading program will kick off on June 8 and end of July 16. Several other programs are also planned during the summer. She  said the library also plans to resume the weekly story time. Wheeler reported that, during April 638 items were circulated at the library and eight new library cards were issued.

• heard from Vance Holifield that one issue came before the planning commission at its last meeting. He said it was a request to operate an auto service business at 530 Sims St. and the board did not have a problem with this request.

• agreed that the polling place for the city will be at Stonepath Church.

•heard from the mayor that negotiations for the next SPLOST in Banks County will be held May 6 with Banks County leaders.

Fifteen percent of Banks County residents have received the COVID-19 vaccination from the local health department.

The Banks County Health Department has given more than 11,590 vaccinations. However, this total includes individuals who live outside of the county.

The vaccines will continue to be given at Grove Level Church, 1702 Grove Level Road, Maysville. However, beginning May 10, the clinic will only operate on Mondays, Tuesdays and Thursdays. Walk-in will be accepted from 10 a.m. to 2 p.m. The clinic will close from 12:30 p.m. to 1 p.m. for lunch.

The number of new cases of the virus being reported each week continues to be low. Since last week, only three new cases have been reported in Banks County, according to the report from the Georgia Department of Public Health.

The total number of cases of the virus reported in Banks County since March 2020 is 1,632 — up from 1,629 reported for the same period last week.

After hiring a consulting firm to make recommendations on improving the city’s police department, three of the police officers resigned before changes could be made.

“Like many cities across our country, the City of Baldwin has experienced significant challenges within our police department,” Mayor Joe Elam stated. “In an effort to improve our services, we recently secured the services of a consulting firm to help us find opportunities to build a department we can all be proud of. Unfortunately, before we could begin implementing needed changes, we received the unexpected and abrupt resignations of three of our officers, including interim chief Matt Nall.”

The mayor added that the city is “actively taking steps to rebuild the department.”

“We will not accept anything less than a first-class department for our citizens,” Elan said. “As mayor, I along with the council, remain committed to ensuring the public safety of the citizens of Baldwin.”

A woman missing from Banks County was found dead in a heavily-wooded area of the county on April 28, according to the Banks County Sheriff's Office.

Amanda Hall, 42, was last seen April 23 in Banks County. The BCSO had earlier posted a lookout for her.

The BCSO was doing a  grid search in a wooded area when Hall's body was found.

No cause of death was given and the investigation is on-going, officials said. An autopsy is slated for later in the week.

According to a story in the Union-Recorder, Milledgeville, Hall was originally from Baldwin County in middle Georgia.

She also has ties to White County, officials said.