Banks County High School seniors are show walking through the middle school as students lined the hallway cheering them on. The seniors also did a walk-through at the primary and elementary schools last week before graduating.

MedLink CEO Dave Ward spoke at the Banks County Planning Commission on Tuesday, June 1, on a a rezoning request for a 7.79-acre lot at Hwy. 441 and Banks Road from ARR (agriculture rural, residential) to C2 (commercial) to be used as a medical office building.

The Banks County Planning Commission recommended approval Tuesday night for a rezoning that would pave the way for MedLink to relocate and expand its medical center.

The planners unanimously recommended approval of the request from MedLink CEO Dave Ward to rezone the 7.79-acre lot at Hwy. 441 and Banks Road from ARR (agriculture rural, residential) to C2 (commercial) to be used as a medical office building.

The Banks County Board of Commissioners will take final action on the request when it meets at 6:30 p.m. on Tuesday, June 8, at the Annex Building in Homer.

At the planning commission meeting on June 1, Ward said that the plans are to relocate the MedLink office that is currently located beside of Anderson Auto in Homer to the new site. He said the medical office now serves 2,500 people per year, but it would be able to serve 10,000 per year at the new location. Ward said the new site would also offer additional services, including a pediatric doctor and diabetes and nutrition.

Ward said the new location would be a $3 million investment and would eventually employ 25 to 30 people. He said long-term plans include locating a second building on the property that would offer dental services.

“We have outgrown the current space significantly,” he said.

There was a question from a resident on Banks Road about the condition of that road and the increase of traffic. Code enforcement officer Paul Ruark said plans for road improvements would be done after the rezoning is approved and before the new building is constructed on the site.

In other business at the meeting, the planning commission also made the following recommendations, with the BOC to take final action at the  June 8 meeting:

•denial to Caroline Wilson Christie for a conditional use permit for 100 acres at 810 Spring Road for a multi-use facility, including an event venue in a building on the site.  Christie said she and her husband operated a wedding venue for 12 years in Dawson County and they wanted to do something similar, but on a smaller scale, on this property, where they also live. Several members of the planning commission questioned the conservation use designation of the property and whether this use would be allowed. Christie said her plans are “agri-tourism,” which she believes is allowed under conservation use.

Four property owners on the road spoke in opposition to the plans, including Ken Brady, who said, “A lot of this she wants to do is going to have to be rezoned for commercial.” Another resident on the road questioned why the building for the event center was built before the conditional use was approved. This issue was also questioned by members of the planning commission. Christie responded to this stating that she applied for a building permit from the county, met with environmental officials on a septic system and the fire marshal on meeting codes. “I was upfront that we wanted a wedding venue, which is allowed under agriculture,” she said. “I built it to specifications.... As far I knew, we were doing what we were supposed to do. I was very up front that a wedding venue is what we wanted to do. We did everything the county told us to do.” There was applause from the audience when the planning commission voted to recommend denial of the request. Chairman Jack Stewart stated to the applicant, “We’re just a recommendation board. Take it up with the commissioners.”

•approval to Chelsea Patterson to rezone a 6-acre lot on Hwy. 441 from ARR to C2 to locate a car dealership and car storage business. Brad Patterson spoke on the request and said plans are to relocate Chelsea’s Classic Cars from Yonah-Homer Road to this site. He said the move is wanted in order to “get more exposure and have more room to expand.”

•denial to a request from Carla Brown and Kaleigh Henderson for a variance to place two dwellings on a 34-acre lot at Lord Road due to a medical hardship. No one spoke in opposition to this request. 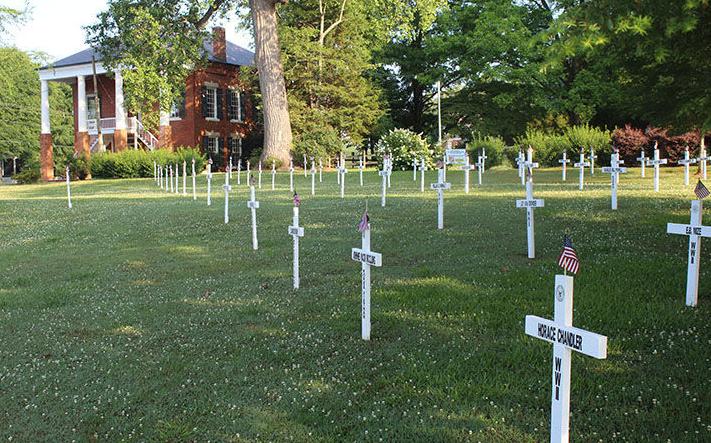 The Sons of the American Legion Post 215, Homer, placed flags in downtown Homer for Memorial Day in honor of Banks County veterans. The group also places flags in Homer for Veterans Day each year. Anyone who would like a local veterans name to be placed on a flag is asked to call Michael Sheppard, 706-677-2740. The Home Depot of Banks Crossing and SteelMart of Gainesville are sponsors of the project.

The Lula Planning Commission will hold a called meeting at 6 p.m. on Tuesday, June 8, at Lula City Hall.

Items on the agenda include:

Banks
Board of health to meet June 8

The Banks County Board of Health will hold a regular meeting on Tuesday, June 8, at 9 a.m. in the conference room of the Banks County Health Department, located at 667 Thompson Street, Homer.

The Georgia Mountains region saw a decrease in its unemployment rate for April.

In Georgia Mountains, the unemployment rate decreased by 0.1 percentage points, bringing the rate to 2.7 percent. A year ago, the rate was 10.5 percent.

Georgia Mountains ended April with 346,808 employed residents. The number decreased by 1,006 in April and was up 42,628 as compared to last year.

Initial claims for unemployment decreased by 3 percent in April. When compared to last April, claims were down by about 93 percent.

Visit gdol.ga.gov to learn more about career opportunities, Employ Georgia, and other GDOL services for job seekers and employers. Don’t forget to connect with us on social media.