News
No decision yet in Kolter suit against Hoschton

The Cresswinds community at Twin Lakes in Hoschton recently had it official ribbon cutting ceremony with the Jackson County Area Chamber of Commerce. The development will eventually bring 2,600 new homes in a master planned community to the town. But the developers of the project, the Kolter Group, has recently tangled in court with town leaders over Hoschton's move to implement expensive impact fees on new homes in the development. The development will also include a large Pickleball center that is expected to open in the spring.

No decision has been handed down yet by the court in a lawsuit filed by Kolter against the City of Hoschton over the town's decision to implement expensive impact fees on new construction.

A court hearing was held Oct. 22 in Jackson County Superior Court on the issue.

Kolter is Hoschton's largest landowner and is developing a 2,600 master planned community in the town known as Twin Lakes.

The suit seeks an injunction to stop the city from collecting around $2,900 in impact fees on new homes in the city. The impact fee system was created over the summer in an effort to collect funds from the Kolter project.

The lawsuit says that Hoschton has "been engaged in an ongoing crusade to extract as much money out of Plaintiffs as possible..."

In the suit, Kolter said it had to threaten litigation against the town over the summer to have the city council lift an unexpected building moratorium.

The lawsuit says that Kolter has invested millions of dollars in its massive residential project, including providing funds to upgrade Hoschton's water and sewerage infrastructure, and was blindsided by the city's move to put impact fees on the development.

Kolter argues in the suit that its development will pay for the increased cost of city services without impact fees being put into place. While the city does not currently levy a property tax, it does collect a share of county sales tax income.

Among other things, the suit alleges that Hoschton:

• rushed the impact fee process "without any meaningful input from either the public or members of the development community."

• had published conflicting legal notice advertising about the dates and times for public hearings.

• had created an illegal advisory committee for the impact fees that didn't conform to state law.

• held a public hearing on Aug. 10 for the impact fees, but left that off the city's published agenda until the time of the meeting.

• failed to consider that residents in the Kolter project would be paying property taxes to the West Jackson Fire District for fire protection and that the city itself does not have a fire department. 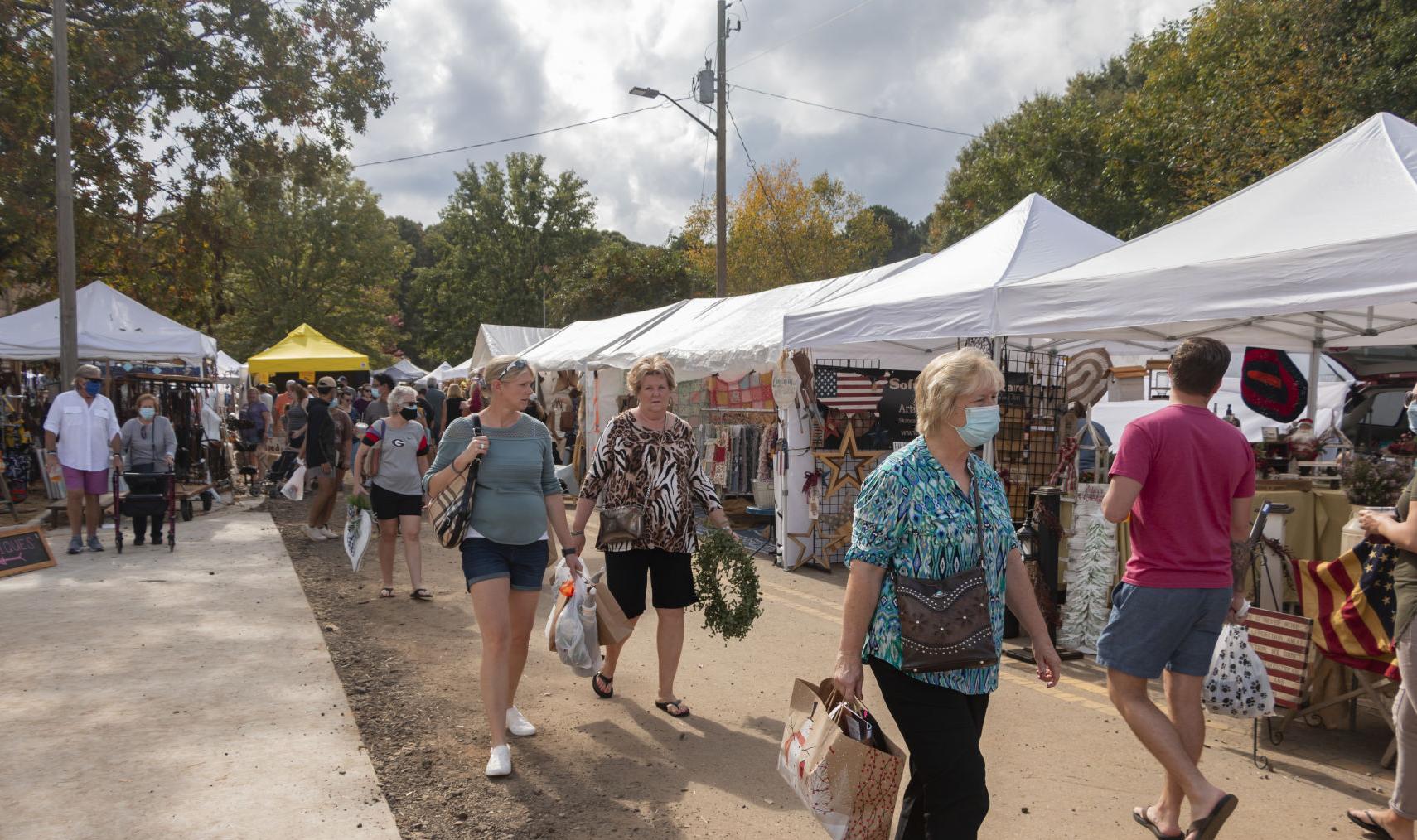 Countryside Antiques hosted its 18th annual antique and artisan festival in downtown Braselton on Friday, October 23, through Sunday, October 25. The festival was voted one of the top five festivals in the state of Georgia. It brought 30,000 antique enthusiasts to the area during the three-day event that featured 300 vendors. Dealers from all over the metro area and surrounding states brought their best antiques along with an array of items including: rustics, repurposed creations, home decor, local artist, furniture, vintage, salvage, primitives, architectural, vintage jewelry, repurposed pieces, plant nurseries, advertising pieces, ironworks, statuaries, elegant glass, pottery, shabby, rustic, wood working and much more. Some local vendors sold their homemade jams, honey and breads. Live music and food trucks were also available on site for those taking a break from shopping. Photos by Wesleigh Sagon

The City of Hoschton is mulling the addition of a police department, but if population projections come to fruition one might be inevitable.

Hoschton mayor Shannon Sell told a crowd of 30-40 citizens who gathered Tuesday (Oct. 20) for an outdoor town hall meeting that the city could have 10,000 residents between the next four to seven years.

“From our research, and talking to law enforcement, I doubt there is a city in the state of Georgia, maybe not in the country, with 10,000 people in it that doesn’t have a police department,” Sell said.

The need for a department will be unavoidable, according to Snell.

Nevertheless, most of those on hand at the meeting didn’t feel the city of around 2,000 residents currently warranted a police department.

Sell took a show of hands of how many wanted a police department now, and only two residents raised their hands.

More hands went up, however, when he asked if Hoschton with 5,000 residents should have a department and almost all hands were raised when he moved the population figure to 10,000.

Hoschton is currently served by the Jackson County Sheriff’s Office, though a city department would allow for prompter response times.

“Our sheriff has told us, she said, ‘Shannon we’re going to be there for you, but we may not get there as fast as your own police department should,’’’ Sell said.

But Sell warned that a police force would be expensive. Based on the city’s research, the cost for each officer would be $100,000 per year once all expenses are tallied.

The city actually provided a police force for years. But financial woes forced the city to scrap its police force about a decade ago and Sell said there’s not a sufficient revenue stream to re-institute the police department. Hoschton doesn’t levy a property tax.

“If we want it, we’ve got pay for it,” Sell said. “There is no revenue stream coming into Hoschton to pay for a police officer.”

Resident Michael Bagwell pushed back against that, though, asking the city to investigate how it afforded a police department previously. Bagwell said if more revenue is required for a police department, that money needs to be justified.

A handful of other residents spoke to the council about police service.

Doug Hunt asked what level of property tax would be required to start a police department. Sell wasn’t certain, saying the city is still running numbers.

Jimmy Freeman asked why the city hadn’t sought a five-year, $535,000 federal grant for a police force. Sell said no one has informed the city of such a grant.

“If you’ve got an address, we’re willing to call them,” Sell told him.

•increasing council member and mayor pay from the current rate of $25 per meeting to attract future candidates.

•changing the city charter to transition to a city manager-run government; adding two council seats; and electing council members from districts rather than at-large to protect representation on the council in the downtown area.

•implementing a city property tax. “We do not have a sustainable revenue source to operate this city long-term,” Sell said.

•the formation of a downtown development authority.

According to Sell, the council could not address the construction of Twin Lake, a development which will bring close to 3,000 homes into the city, due to the city being in litigation with The Kolter Group, which is developing the subdivision.

The council also fielded complaints about traffic and speeders through town.

The City of Hoschton delayed action Oct. 26 to give what is usually a routine approval for a preliminary plat for Phase 4 in the Twin Lakes development.

The city is locked in a legal tangle with Kolter, the developer of Twin Lakes, over the town's recent decision to impose impact fees on new construction. Kolter sued Hoschton over the move last month.

The preliminary plat was a separate issue until the city's planning board recently recommended denial of the plat approval, saying it had questions about the impact fee lawsuit.

Former council member Scott Butler is chairman of the planning board and led the move to stop the plat's approval despite a recommendation of approval from city planner Jerry Weitz.

The council voted to delay the Kolter plat approval, asking the city attorney to find out why the town's planning commission recommended denial.

Kolter has also sent attorneys and a court recorder to recent council meetings, along with some Kolter executives, to monitor the council's actions.

"The City’s actions are causing real harm to real people without any justification," said Kolter attorney Paul Mitchell of the city's delay in approving the plat.

Kolter is the town's largest landowner and developer. Once built to completion, the Twin Lakes development will have 2,600 homes, massively increasing the size of Hoschton's population.

Some council and planning board members, however, appear to believe that the city's agreement with Kolter, done by a previous city administration, is flawed.

Hoschton is supposed to improve its water and wastewater services for the development, but Kolter has argued that the town is behind schedule on those projects.

in other action, the council approved putting a $3 per month fee on recycling bins ($3 per bin) that some city residents use. Councilman Shantwon Astin was opposed to the fee.

• contracting with the county magistrate court to handle code enforcement issues for the city. The town currently has no way to enforce its codes.

• contracting with Emery and Garrett to do well site exploration for a new city water well.

• software for the city's inspection department.

• a contract for preventative maintenance on the town's lift station generators.

Since the beginning of the pandemic, the hospital system has discharged 2,584 patients.

There have been 364 deaths.

In Braselton’s four county area, there have been:

The 2020 voting season is nearing its end as Election Day approaches next week for the Nov. 3 General Election.

Polls will be open from 7 a.m. to 7 p.m. on Election Day in Braselton’s four-county area.

Ballots and polling locations will depend on the county you live in.

Find your sample ballot and your polling location at www.mvp.sos.ga.gov.

Early in-person voting continues this week through Oct. 30. Details include:

Early in-person voting in Jackson County for the Nov. 3 General Election is being held through Oct. 30 at the Gordon Street Center in Jefferson and in Braselton and Commerce. Locations include:

Eligible voters in Gwinnett County may vote advance in person every day through Oct. 30 at the following locations:

Voters in Hall County will be able to cast their ballots through Oct. 30 from 7 a.m. to 7 p.m. at the following:

In-person advance voting will take place through Oct. 30 at the Barrow County elections office. During this final week of early voting, the elections office has expanded hours from 8 a.m. to 7 p.m.

The recommendations were developed by the Centers for Disease Control (CDC).

“Many traditional Halloween activities can be high-risk for spreading viruses,” according to the recommendations. “You can reduce the risk of spread by making smart choices for Halloween fun.”

According to the CDC's recommendations, the following are moderate risk activities:

Those with COVID-19 or those who've been exposed are asked to not participate in in-person Halloween festivities, including handing out candy to trick-or-treaters.

The CDC recommends that those who plan to host a Halloween celebration assess current COVID-19 levels in the area to determine whether to postpone, cancel or reduce the number of attendees.

The Georgia Department of Education released the 2020 ACT scores earlier this month.

While most schools topped the state average, there were several Braselton area schools that fell below that composite average including Jackson County Comprehensive, Cherokee Bluff and Winder-Barrow high schools. WBHS was also below the national average. 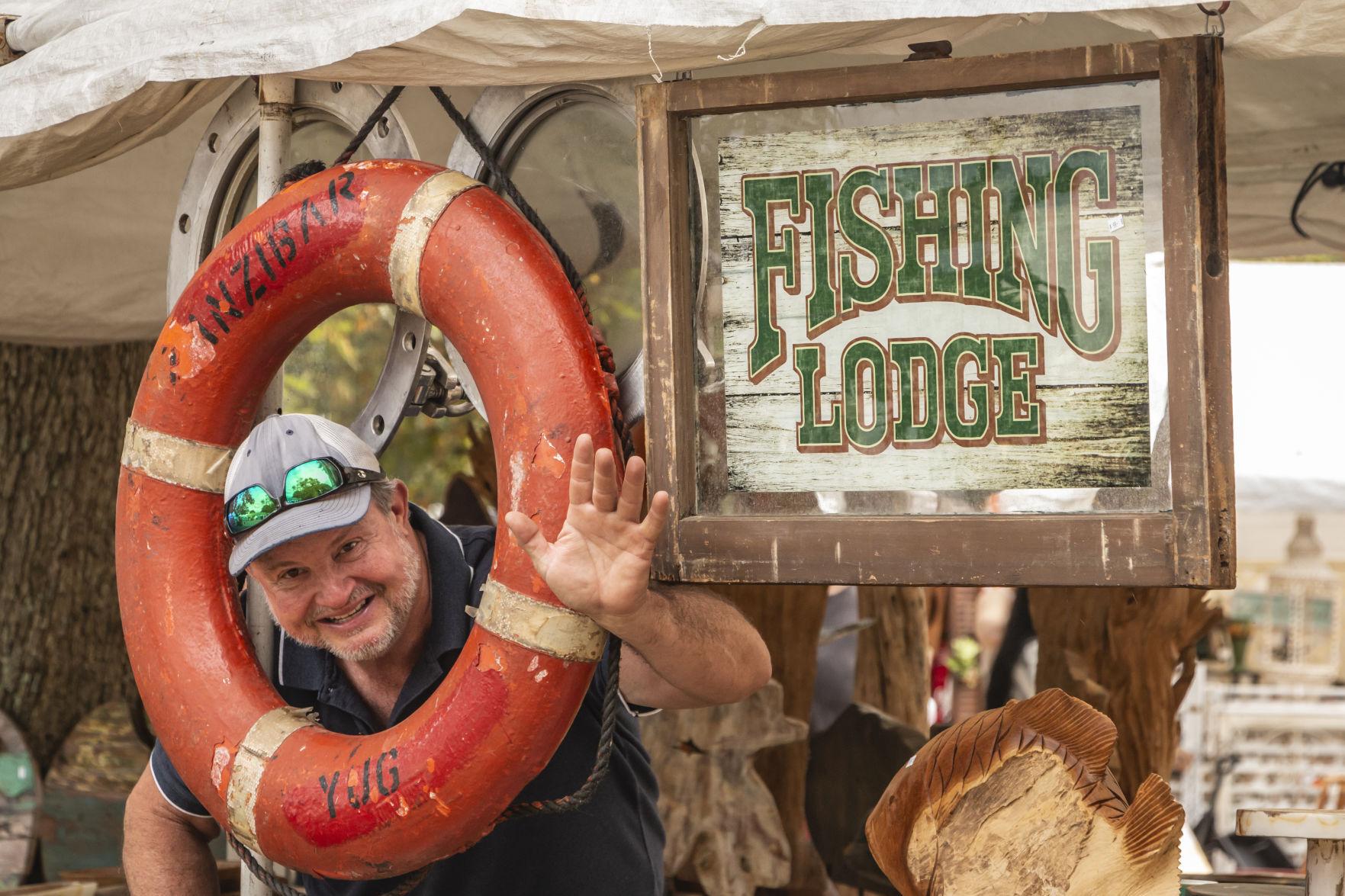 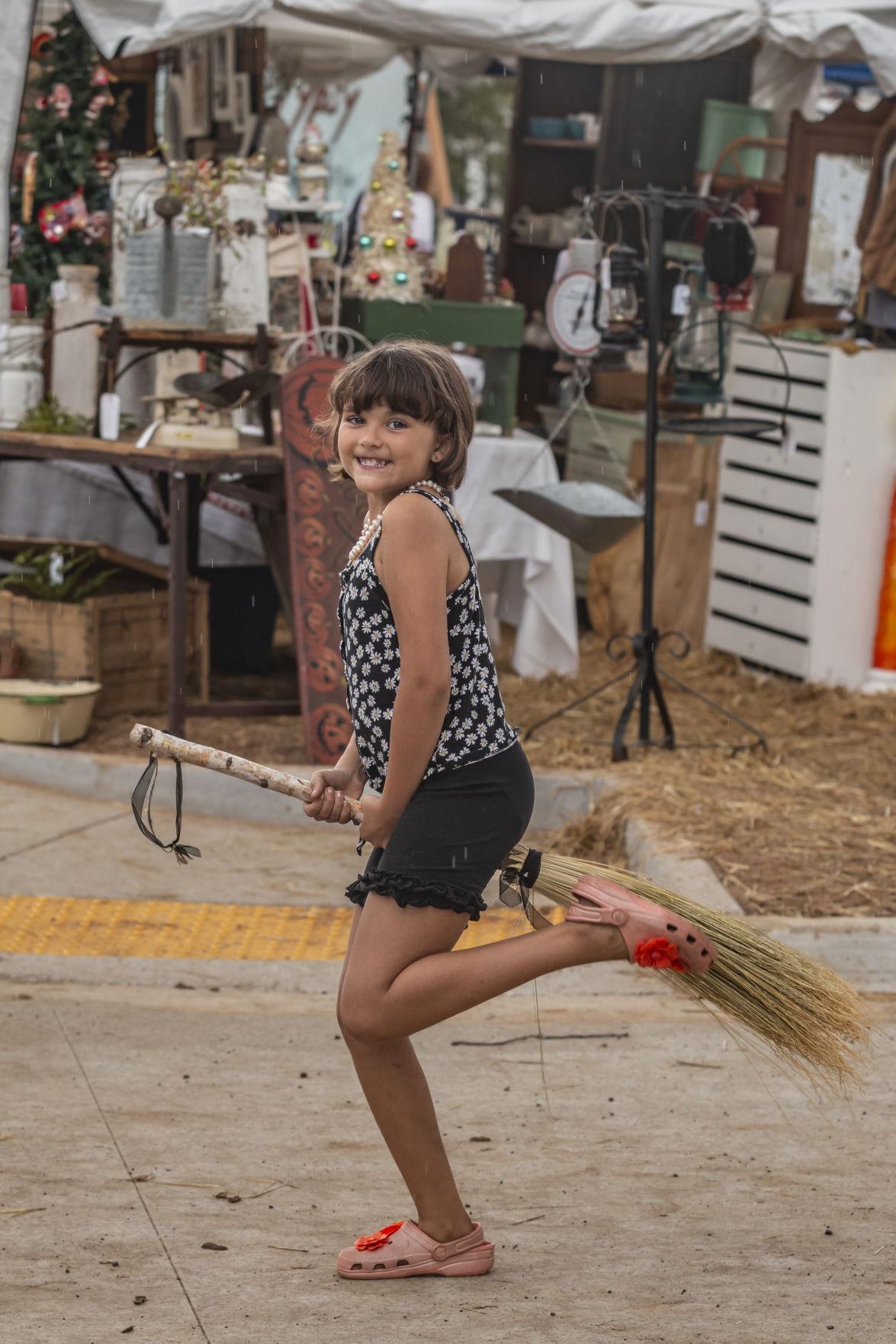 Stella Purcell, 8, was all smiles after receiving a decorative broom for Halloween at Braselton’s 18th annual antique and artisan festival. The broom was purchased from Stephanie Kit, owner of The Herb and Rock Shop in Pickens South Carolina.

Halloween festivities may look a little different this year due to the ongoing COVID-19 pandemic.

The Braselton News would like to see the unique ways the community is celebrating Halloween this year.

Those who would like to submit a photo for an upcoming issue of the paper may do so by emailing alex@mainstreetnews.com. Include the name(s) of people in the photographs.

The deadline is noon on Monday, Nov. 2.