An effort by former Jackson County Republican Party chairman Ron Johnson to challenge the residency status of over 2,000 county voters failed on Dec. 22 when the county elections board voted 3-2 to reject his move.

The effort was part of a larger state-wide move by an organization called "True the Vote" out of Houston, Texas, which is seeking to challenge the residency status of voters in Georgia leading up to the Jan. 5 runoff election. The group's focus is mostly to challenge absentee ballots, especially those which come from out-of-state. Military personnel, those temporarily living elsewhere and college students who reside in other states can still vote in local elections.

The group's efforts have failed across the state, however, as local county elections boards have overwhelmingly rejected the claims. Overall, the group is attempting to challenge the status of over 380,000 registered state voters.

Johnson presented the Jackson County Board of Elections with a spreadsheet of 2,320 names of registered voters in the county who he claimed have moved out of the county or out of the state. He told the board that the spreadsheet was enough to red flag those voters and have them prove their residency status before voting.

"All I had to do was prove probable cause and I did with those two laws," Johnson said after referencing state codes.

He said the board of elections should investigate each of those to determine their legal status to vote in the Jan. 5 election.

But elections board chairman Eric Crawford argued that Johnson didn't meet the probable cause standard and questioned Johnson about where he got his information from and how it was compiled.

Johnson admitted he was given the list by someone else, the True the Vote effort, and that he had not personally compiled the names.

"It doesn't get close to probable cause," Crawford said of Johnson's spreadsheet.

Johnson's list was apparently generated by cross-referencing local voter rolls with a national database of address changes, then broken down by county. The True the Vote group then solicited people in every Georgia county to take their local lists and file a challenge with their county elections board.

But changes of addresses doesn't automatically disqualify someone from voting in the county since the address change may be for college, the military or a temporary job elsewhere, elections officials noted during the meeting.

The county elections board heard a similar case in March when a voter in Hoschton challenged the residency of James Lawson, who was running for city council. Lawson got his mail at a house he owns in another county, but that ultimately didn't disqualify him from being a resident of Hoschton and legal candidate, the board decided.

After a move by the elections board's two Republican members, Jeff Hughes and Larry Ewing, to challenge 1,140 of the names failed 3-2, Crawford made a motion to deny Johnson's challenge, a motion that passed 3-2 with Crawford and the board's two Democratic members voting in favor of denial and Hughes and Ewing voting against it.

The action wasn't the first time Johnson had complained about wanting to "clean up" the county's voters list.

For a short time, Johnson served as chairman of the county elections board during which he brought up in a board meeting wanting to take people off local voter rolls who he claimed had moved.

Johnson was forced to resign as elections board chairman after it was revealed he was still involved in GOP party functions, a violation of state law for an election's board chairman.

Jackson County Democratic Party chairman Pete Fuller told the board that Johnson's efforts were just  PR stunt to gin-up suspicion about the validity of elections.

Fuller said it was part of an old technique knowns as "voter caging" where spurious claims about voter registrations are used to challenge the legitimacy of voters. The effort is an attempt to put barriers up to some voters, forcing them to prove their legitimacy based on unreliable data.

"This is something that has been seen in case law for years and it's not legal," Fuller said.

Fuller also pointed out that as a practical matter, if someone from Jackson County moved elsewhere in Georgia, they would still get the same ballot since all the contest on the Jan. 5 runoff ballot are state and federal races.

At times the meeting got heated. At one point, Johnson began telling a story about an unrelated incident when Crawford interrupted and told him to stop. When Johnson kept on talking, Crawford raised his voice.

"Sir, sir, sir, sir I will have you removed from the meeting if you don't be quiet!" Crawford said. "This is a public meeting, you can speak and you've been given the opportunity to speak, but that (Johnson's story) has nothing to do with this hearing."

Crawford told him he could follow the rules or leave.

"Are we clear?" Crawford asked as Johnson sat silent. 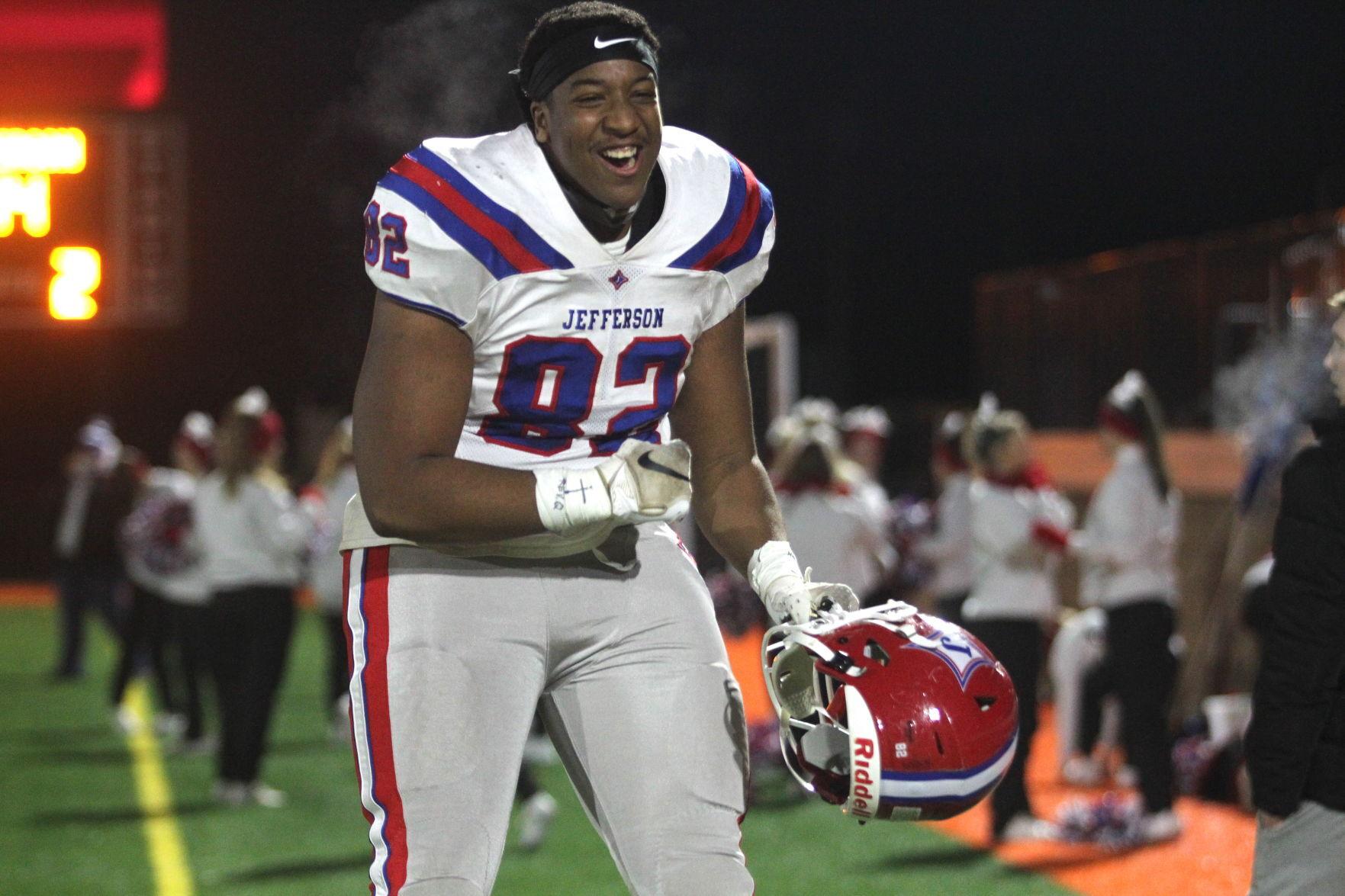 Jefferson's Jahiem Hardy gets fired up as the third quarter begins in the Dragons' Class AAAA semifinals game with Benedictine on Dec. 18. Jefferson won 42-35 to advance to the Class AAAA state championship against Marist Dec. 29 at 3:30 p.m. at Center Parc Stadium in Atlanta. See page 1B for a preview of the state championship game.

A Striplings store could be coming to South Jackson following action by the Jackson County Planning Commission on Dec. 17.

The planning board approved a rezoning  of eight acres at 2567 Brock Rd. (at Hwy. 129 South) for the project. The property is being rezoned from A-2 to CRC (commercial.)

In an unusual situation, more people spoke in favor of the controversial project than spoke in opposition. When asked who supported the project, a majority of hands were raised in the hearing room in  a group of around 30 people.

Several speakers said that such a store is needed in the area since there are no grocery stores in South Jackson. One person called Striplings an "upgraded country store." Among other items, Striplings is known for its meats.

The firm has six locations in Georgia, the closest one being in Bogart. Some of its products are sold in traditional grocery stores as well.

Two people spoke in opposition to the rezoning. Babs McDonald, representing Citizens for South Jackson, said the project would create traffic problems in the area and that location is outside of four commercial "nodes" along Hwy. 129 in South Jackson that the county recently approved in its updated comprehensive plan.

She presented the planning board a letter signed by area residents in opposition to the project.

But several area residents spoke in favor of the store, saying that there was no other viable use for the property, which fronts on such a major highway.

The Jackson County Board of Commissioners will have the final say on the rezoning at its January meeting.

In other business, the JCPC:

• denied a request for a map amendment on 32 acres on Big Bear Rd. at Savage Rd./Hwy. 330 in South Jackson for a subdivision.

• denied a request for a map amendment at 107 Gilbert Rd. Jefferson to change 2.5 acres to suburban to divide the property for housing.

A rough outline of how the vaccine for the Coronavirus will be distributed in Jackson County is starting to take shape.

Two different vaccines have been approved by the FDA for emergency use in the U.S.

Front-line medical personnel will be the first to get the vaccine, followed by nursing home patients. Area hospitals have already begun to vaccinate their personnel.

Local first responders — EMS, law enforcement and firemen — are also high on the priority list and will be able to make an appointment online and get the vaccine at the Georgia Department of Health office in Athens in the coming days, said Bryan Bullock, Jackson County EMA director.

The Athens office will also be the starting point for general population vaccinations from the area as well.

After that, an inoculation center will be established in Jackson County for local citizens to get their vaccine.

Bullock said he sent the regional DPH office three potential site locations in the county. That could begin around the first of February, he said.

Meanwhile, residents of nursing homes will get their vaccines in those facilities. Pharmacists from CVS and Walgreens are being recruited to dispense those vaccinations.

The CDC has established a priority list of how the vaccine should be distributed, but the details of that fall to each state to sort out.

After medical personnel and nursing homes, the vaccine will go to:

• those over age 65-74 and anyone younger who have high-risk medical conditions. Also included in this phase are other essential workers no included in the earlier round.

• finally, those age 16-64 who don't qualify for any of the above rounds of vaccination.

Jackson County is the third-worst in the state in the rate of new Covid cases over the past two weeks.

The county has had 882 positive cases over the past 14 days, a number that pushed its rate to a high of 1,181 cases per 100,000 people. That's the third highest rate in Georgia behind Whitfield and Rabun counties.

In addition, the county also has a high positive rate at 24% of all tests giving a positive result for the virus. That is also among the highest rates of any county in the state.

Overall, the county has had over 4,850 positive cases to date with 292 people hospitalized.

At least 57 people in the county have died from Covid with another 10 deaths are suspected to be from the virus.

Over 10,000 people in Jackson County have voted so far in the runoff election for Georgia's two Senate seats.

McDonald is a native of Jackson County where he served on the board of commissioners and as a long-time state representative.

Absentee ballots are also available by going to the Georgia Secretary of State website and downloading a request form.

Absentee ballots may be mailed to the county elections office, or put in one of the county's three drop boxes at:

Election day on Jan. 5 will be held at the county's four voting locations: Central Jackson at Hope Crossing Church in Jefferson; North Jackson at Mt. Olive Church in Commerce; West Jackson at Free Chapel in Braselton; and South Jackson at Southside Church.

The 94th annual Jackson County New Year's Day Day program will be held at 9 a.m. on Friday, Jan. 1, at the Historic Courthouse in Jefferson.

Sheriff Janis Mangum will be the presiding officer and Pastor Chris Stephens of Hope Crossing Church will be the speaker. Team Pact, a Jackson County organization dedicated to preparing students for business and political leadership, will again host the event.

Others on the program include: Camie Thomas, Clerk of Court, opening prayer; and Sherry Moore, Probate Court Judge, introduction of county officers and guests. There will also be special music.

The New Year's Day program started in 1927 with the late Judge W.W. Dickson presiding. Its purpose is "to begin the New Year with a service of thanks to God for the good things of the past year and to dedicate the beginning of the New Year with prayer for a continuation of these blessings."

All are invited to attend.