The Homer City Council wants to be proactive for the growth that is headed to the city. At the November meeting, leaders addressed water, sewer, traffic and a potential new subdivision.

Mayor Doug Cheek told the council there could be a 25-home subdivision coming to McCoy Bridge Road. The plan must get the green light from the planning commission before coming to the council for approval. Cheek said it would be located on a 36-acre tract of land.

Right now, zoning allows for one home per acre. Council members noted that there is already a lot of traffic on that that road. There could be site distance issues and it could require a three or four way stop sign if the project is approved.

The city council also discussed the replacement of 7,000 feet of water lines. The project should be released for bids in January.

While there is a new well in place providing 100,000 gallons a day, water lines dating back to the 1950s and 1960s cause murky water issues at times.

The city continues to try and negotiate the purchase of a small piece of land for a secondary well. This specific location was determined by a geologist hired by the city.

Attorney David Syfan told the council that he wrote a letter to the land owner in hopes that the dialogue to purchase the property would resume.

The council also talked about the replacement of the Hudson River Bridge. The city is responsible for the engineering cost of $16,500, while the Georgia Department of Transportation will pay to relocate 700 feet of water lines. The project should be released for bids in May 2022.

According to the latest information, this project will not require a detour.

The council is awaiting a waste water feasibility study. The city should receive a grant for $30,000 to pay for the study. Once completed, the city could begin negotiations to tie in the Banks County sewer, if it is recommended.

Council member Cliff Hill discussed upgrades for the fire department, including new equipment and a fire truck. Since the Special Purpose Local Option Sales Tax (SPLOST) was approved by voters earlier this month, those funds will pay for the $500,000 in improvements within the department.

In other business the council agreed to contact the Georgia Mountain Regional Development Commission to ask them to verity election districts following the data released in the 2020 Census. This is standard procedure to evaluate the population within the current election districts to be sure they haven’t changed due to increase or decrease in population.

You may have a small meadow or area around your home landscape you are not sure what to do with it to make it attractive. If you are thinking about a more natural look, you could consider planting a wildflower garden.

The best time for planting a wildflower garden is during the months of October and November. The soil temperatures are cooler at this time which allows wildflower seed to go through a stratification process, providing for a good germination of the seeds. Also, the fall time is good for taking advantage of rainy seasons for good soil moisture.

You should select wildflower seeds that grow naturally in this area and are suited for growing in Hardiness Zone 7-8.

Seed packets normally list the growing requirements for the specific plants. It doesn’t take much soil preparation to plant wildflowers. The first step in establishing a wildflower garden is to remove any weeds by either pulling them or by using a herbicide such as Roundup or 2,4-D.

The next step is to lightly till the soil. Then, mix the seed with an amount of sand so that you can spread the seed out evenly over the area. Finally, rake lightly over the soil or tamp the seed into the soil so that good soil-to-seed contact is made. Be sure you don’t plant the seeds too deep or you may lose some germination.

Apply a thin layer of mulch of about one inch or less and saturate the area with water. If rain becomes scarce, irrigate the area with a good soaking of water once a week. Some wildflower seeds will germinate in the fall very soon after planting. Others can take up to 12 weeks to go through the stratification process before germinating.

Still other seeds with hard seed coats must be scarified (a physical or chemical process which scratches or grinds down the seed coat) to allow the seed to absorb water before they can germinate.

Once spring arrives, all the hard work will have paid off when the beauty of the array of colors and floral displays shows up in that once barren spot behind your home landscape. For more information on landscaping, planting flowers, shrubs, and trees, check UGA extension publications online or give us a call. Ways to contact us are to call us at (706) 677-6230, by email at zmccann@uga.edu, or to come by the office at 413 Evans Street, Homer.

New COVID-19 data shows that COVID-19 cases continue to decrease from its peak in mid-August. The total percentage of case positives over the last two weeks sits at just over 8 percent, down from 23.5 percent positive during the summertime peak.

With the arrival of flu season, District 2 Public health encourages Banks County residents to get vaccinated now against COVID-19 and flu to protect themselves and their families from the spread of both respiratory viruses and continue to ease the burden off of the hospital system.

“We cannot predict the severity of each flu season; however, flu vaccination remains the best way for people to protect themselves, their families and communities from the flu,” said Zachary Taylor, District 2 Public Health Director. “Residents who are not vaccinated against COVID-19 and anyone who needs a booster shot, now is a good time to get a COVID-19 vaccination.”

There is no harm in getting both flu and COVID-19 vaccines at the same time; they can be administered in one visit. Children 5-18 years old are now eligible to receive their COVID-19 vaccine. While Adults 18 and older have been eligible to receive the COVID-19 series since January 2021; a booster dose is available for specific groups of adults who have completed the two-dose series at least 6 months ago.

Any resident who has questions about getting flu or COVID-19 vaccines should speak with their health care provider.

Anyone who wishes to be vaccinated may visit Banks County Health Department. Appointments are not required. For more information about influenza or COVID-19 vaccines contact the health department at 706-677-2296.

Community Brotherhood will be held on Sunday, December 5, at 7:30 a.m. in the Don Stewart Hall at Homer United Methodist Church for a monthly breakfast and program.

The speaker will be Ja'Quon Chamblee, a deputy with the Banks County Sheriff's Office.

Brotherhood is the only ecumenical, basically lay, group in the county. Churches of every denomination are invited to participate.

Spouses are welcome to attend the December meeting, along with their husbands. 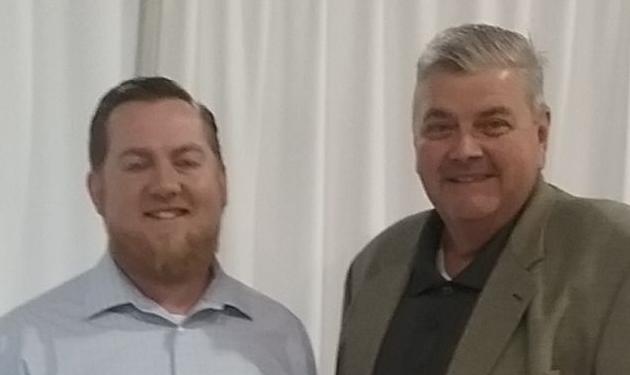 Mike Welborn (right) was the guest speaker at the recent Mt. Carmel Brotherhood breakfast. He is shown with Mt. Carmel pastor Zach Watson (left). Welborn is the executive pastor at Airline Baptist Church in Gainesville.

The Banks County Board of Education approved three personnel items when it met on Nov. 11, including the following: