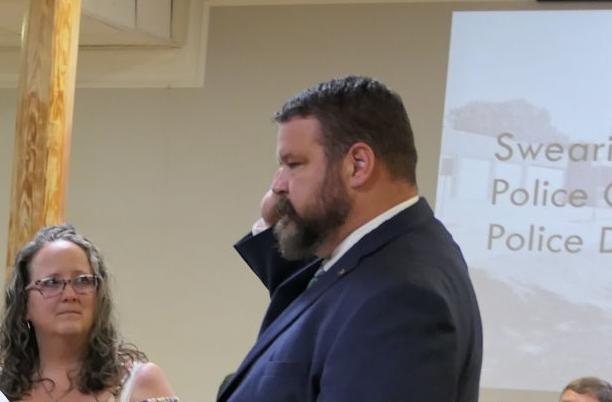 Braselton has hired a director for its $6.28 million, 40,000 square-foot facility being constructed on Davis St.

Sloane Meyer has been hired to head up Braselton’s still-under-construction civic center.

Meyer told the Braselton Downtown Development Authority (DDA) on Thursday (Sept. 9) that she hopes for a January ribbon-cutting ceremony for the center. She will also soon begin booking the facility.

“Very soon, (Braselton manger) Jennifer (Scott) is going to announce that I will start taking reservations for the 2022 year,” Meyer said to the DDA.

Meyer will oversee a facility that’s already in great demand despite construction not yet being completed. Braselton town manager Jennifer Scott said she'd already been flooded with requests, prior to Meyer’s hire, about renting the facility.

“I was getting, almost every day, somebody who wanted to go ahead and book it,” said Scott, who added that Meyer has already set rental rates for the civic center.

Meyer will work out of town hall until the civic center is ready.

While Meyer said the center will be used for weddings and other private event rentals, she said she certainly wants the space to be utilized for downtown events, too.

“I want to be an intricate part of what Braselton already has going on and double up on the festivals, and if there’s something we can coordinate on the town green and have it in the civic center, I want it to be part of all of that,” she said.

The owner of a decades-old mobile home park on Homer Rd. in Commerce wants to have the property rezoned for its current use, but city officials have balked at approving what is usually a routine action.

Officials can't find any records of when the property was annexed into the city or why it shows up on city zoning maps as R-1 (single family homes) rather than R-5 for mobile home parks.

City manager James Wascher told the Commerce council at its Sept. 7 meeting that he wants to "get to the bottom" of several unanswered questions about the property before he recommends a final action to the council.

Wascher said a search of city records didn't turn up any documents that tell the history of the property's annexation or rezoning. He said the county government also searched and couldn't find any documents about the property.

In addition, Wascher said there was apparently an agreement between the city and property owner for an easement in return for providing taps for the mobile homes, but again, no records of that agreement have been found.

Property owner Michael Scott reportedly wanted to bring in a few more mobile homes to the property, but was told the property didn't have the proper zoning for a mobile home park despite its long history as being one.

Scott then filed a request to rezone the property from R-1 to R-5 to match the existing use of the property, along with variances for setbacks. Rezonings to fix old problems or to reflect current use are common and usually non-controversial.

Those issues weren't discussed at the Commerce council meeting, however.

Wascher said that if indeed the city had agreed to trade taps for an easement, the city should probably honor that agreement and allow additional mobile homes to be put on the 20-acre tract.

Other rezonings discussed by the council on Sept. 7 and slated to be voted on Sept. 20:

• A request to rezone 8.6 acres at 155 Waterworks Rd. from R-5 to R-6 to build 28 townhouse and two single family homes. The issue was controversial at the city planning commission meeting where planners recommended denial. The property at one time was a trailer park and could still be used for that, officials noted. Wascher noted that one reason the commission recommended denial was due to a lot of pushback from neighbors in the area. "I understand where they're coming from," he said. "But you've gotta not make an emotion decision on stuff like this, it's got to be a logical one." Wascher said that under the existing zoning of R-5, "what could go there would be less-desirable than what's being proposed."

• A conditional use at the old Harmony Grove Mill site for part of it to be used as a church.

Other business slated to come before the council Sept. 20:

• The approval of package beer and wine sales at 517 South Elm St.

• The approval of road closures and beer garden for the Oct. 2 Bands, Brews, BBQ & Car Show.

• The approval of street closures for a 5K event on Oct. 23.

A preliminary look for groundwater resources in Jackson County has been done and a second phase of the program is set to soon begin.

Phase one, according to authority engineer Joey Leslie, “was a big overall view of the county looking for potential groundwater areas.”

The first of two work items within phase two is to obtain permission from landowners where geophysical surveys are recommended, which EGGI anticipates will cost the authority $12,500.

Once permission is granted from landowners, the second item will consist of geophysical surveys and detailed on-site geologic investigations. The total cost is $30,000 for each of the 10 zones investigators deem most favorable.

The magnetometer is used to evaluate the magnetic susceptibility of underlying bedrock and the EM16-VLF responds to variations in electric conductivity of the bedrock. The electrical resistivity method measures induced electrical flow through the subsurface by using a DC battery connected to an array of electrodes. By varying the distance between electrode pairs, resistivity for vertical depths below the ground surface and horizontal distances along the electrode array can both be measured.

According to EGGI, these methods have proven effective in pinpointing successful drilling locations. “What this will determine is where we start doing test holes,” said Leslie, “I'm getting very excited about doing so.”

Jackson County will be responsible to obtain appropriate approvals to conduct these surveys within the project site. Once EGGI investigators obtain the final results of the geophysical testing, stakes will be placed in the ground where test well drilling is warranted. All selected drilling locations will be prioritized in accordance with their favorability in producing high yield wells.

“There's a lot of investigative work here. We’ve got lots of properties to access and try because we want to be really strategic about where we drill,” said Leslie.

“The next phase is the phase where we’re actually drilling holes in the water,” said Leslie, “so that’s going to be exciting.”

In other business, the JCWSA approved water and sewer preliminary applications for three new developments, all of which are subject to over a dozen conditions.

The first approved application is for a site recently rezoned for light industrial warehousing space off Wayne Poultry Road. According to authority engineer Joey Leslie, a public gravity sewer is available near this site, however it’s approximately 5,500 feet down gradient, which will require a gravity sewer trunk line with multiple easements across nearby parcels. Procurement of easements will be the responsibility of the developer.

The second application approved will require 1,000 feet of aerial sewer line to serve domestic connections for 125 single-family homes located off Hwy. 124 near the roundabout at Hwy. 11.

The third application approved is for a 45 single-family home subdivision located on Skelton Road and Hwy. 332, across from the new Jackson County High School.

The lines will go underground and tie into a subdivision across the road with gravity sewer, which “we weren’t really thrilled about,” said Leslie. “But their engineers have done a good job to demonstrate.”

JCWSA is also modifying its Commerce water vault, located on the south end of town off Hwy. 334, with the purchase of a rate of flow control valve.

“The connection works just fine except when Commerce pulls, it pulls really hard and it's not beneficial to either side,” said Leslie.

In other business at its meeting, the JCWSA:

● tabled vote on the Jackson County Radio Tower and Ground lease agreement to its next board meeting Oct. 14.

● approved the Consolidated and Restated Intergovernmental Agreement on North Oconee River and Parks Creek Reservoir between the JCWSA and the city of Jefferson.