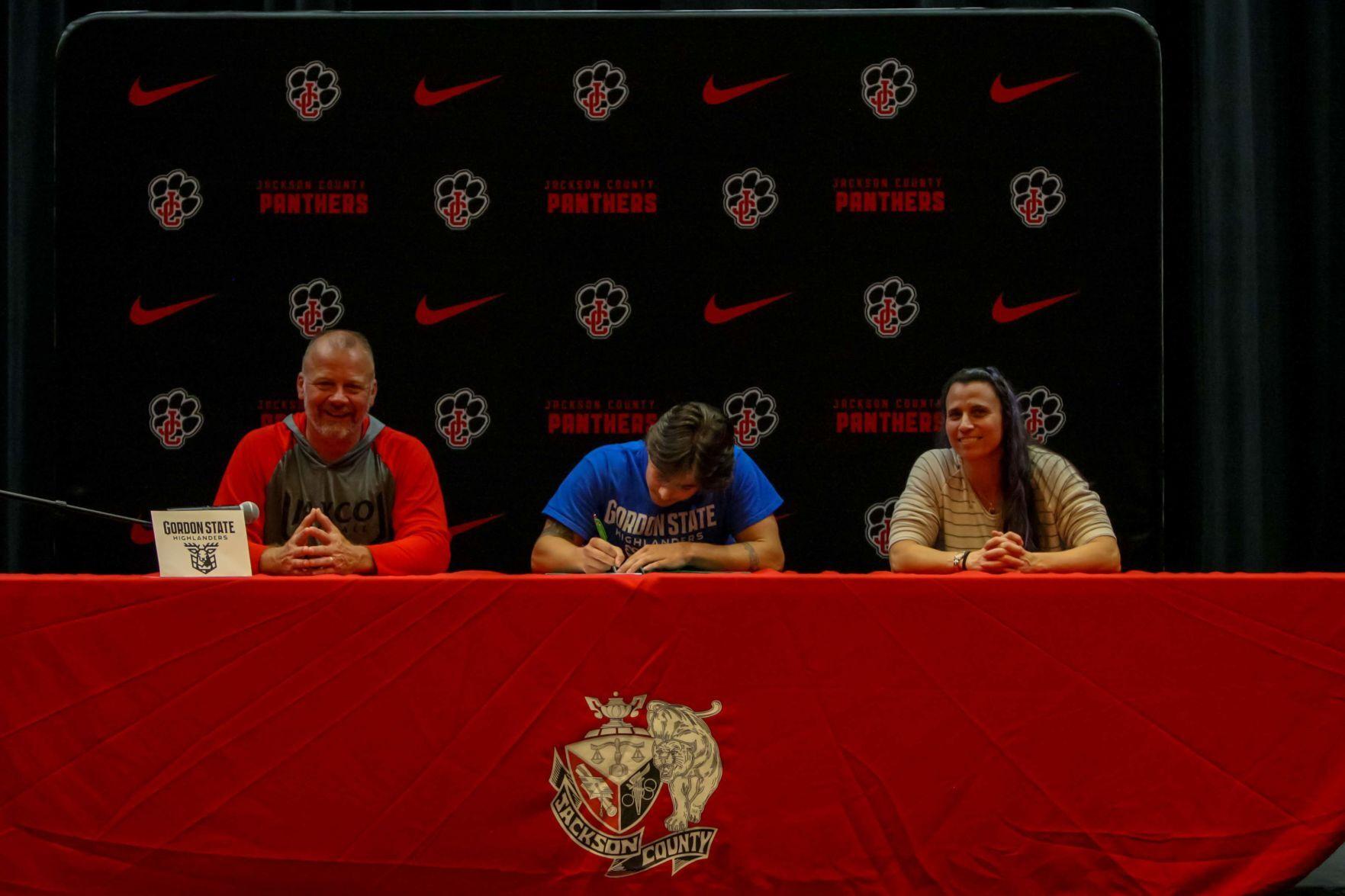 Jackson County pitcher and infielder Nick Steuer signed to continue his baseball career at Gordon State, a member of the National Junior College Athletic Association. Streuer is entering his senior season at Jackson County. Before signing, Panthers’ head coach Matt Bolt praised Streuer for years of hard work, especially in the weight room when the program needed to add size to match up better against Class AAAAA schools after making the jump from the smaller Class AAA. Streuer initially committed to Gordon State on October 7.

Chandler Blake jockeys for position to get a rebound in a recent Jackson County basketball game.

Both squads try for their first wins of the season this Tuesday (Nov. 23) at East Hall from Region 8-AAAA. The boys compete in the North Georgia High School Showcase this weekend at Cherokee Bluff. Their first game is Friday (Nov. 26) against Holy Innocents’ and their last game is Saturday (Nov. 27) against Riverside Military.

The girls’ squad fell to 0-2 on the season with a 37-18 loss to the Bulldogs. The game started close with the Panthers trailing just 8-6 after the first quarter, but George Walton (1-1, 0-0 Region 8-A Private) gained full control of the game in the second quarter and took a 21-8 lead into halftime.

The boys’ had a much better output on offense, despite Connor Bejin missing the game with knee soreness. However, the Panthers couldn’t limit George Walton’s offense as the Bulldogs won 69-47.

Jackson County (0-2, 0-0 Region 8-AAAAA) trailed George Walton (1-1, 0-0 Region 8-A Private) the whole way. The Panthers trailed by a manageable 15-8 margin after one quarter, but the Bulldogs pulled away to take a 35-19 lead into the locker room. Jackson County matched George Walton’s scoring in the third quarter before the Bulldogs pulled away again in the fourth quarter to win 69-47.

The team finished fourth at the State Championship with 1,866 points. Louie Hitt and Caleb Bowers claimed 2nd and 3rd respectively in their categories. In the women’s race, Anna Holley finished 7th at the state championships, with Aedan Tilson earning a blistering 8th place in the JV2 Category. In the middle school race, Turner McDowell finished 8th in the seventh grade boys race.

“My strategy was to sit on the leader's wheel and let him drive the pace during the race and see if I could make a move on him at the end," said freshman Caleb Bowers. "But it just didn't work out that way. I'm happy with my result though.”

Head coach Zach Taylor said “We wanted to come out and push the envelope one more time.”

“I told our athletes a week before the race that we needed to go out on a strong note to continue the momentum into next year.”

The team was 122 points behind third in the overall standings, and despite having a strong showing at the State Championships, they were unable to overcome the difference and earned 4th place. Coach Randy Murphy remarked how far the program has grown since last year.

“To finish 9th last year in the state and now end our season in the top five, thats amazing and nothing to shake your head at," Murphy said. "We are in the upper categories of the more elite teams in the league and without riders in higher categories. It just goes to show you how much heart our kids have.”

“I’ve watched Nate as an 8th grader progress so much in 4 years its amazing to see all that hard work pay off.” he said. “He's a humble kid about his achievements, but he's always looking for an edge to get better.”

Bryan Murphy won the “Golden Pick” award for accumulating the most trail maintenance hours this season. The team also won a team award as well that comes with a donation to their local trails.

“Our kids love working on the trails at the school and in the area," Taylor said. "We’ve developed a great partnership with the school system and we are very grateful for a place for our kids to practice and a facility that the JCHS cross country team can use too.

Katelyn Howard won the Student-Athlete of the Year Award for the state. Taylor quipped “She is an amazing young lady who works so hard both on and off the trail.”

The Georgia Cycling Association Coach of the Year Award went to Coach Zach Taylor. Murphy shared his thoughts on the job Taylor did as coach this season.

“You won't meet another coach who is more dedicated to all these kids and works to help improve them all," he said. “He treats these kids like they are part of his family and he goes above and beyond to support athletes not just on his team, but all athletes in the league.”

The 2022 Season will start back again in March of 2022. If you are interested in joining the team, reach out to Zach Taylor at ZTaylor@JCSS.us