Kendall Sims has been named the new Chief Executive Officer of the Boys & Girls Clubs of Jackson County.

Sims is a native of Jackson County and is no stranger to the Boys & Girls Clubs of Jackson County. Born and raised in Commerce, most of his friends and family know him as "Trey." At the age of 11, he attended BGCJC and continued as a member and staff throughout high school. In 2009, he was named the Youth of the Year, the highest honor based on character and leadership in the club.

Sims said it was in Jackson County that he developed a love for building community and connecting to people. After graduating from Commerce High School, Sims earned his bachelors degree in public policy and nonprofit management from Georgia State University in Atlanta. Throughout his time at GSU, Sims had many opportunities to volunteer with Atlanta based nonprofits.

He has worked at large nonprofits in key strategic and programmatic roles. He began his career at Points of Light, the worlds largest nonprofit dedicated to "inspiring volunteerism and change," working directly with the White House administration administering the President’s Volunteer Service Award. He comes to BGCJC after spending time as the senior manager of volunteer engagement and the director of corporate partnerships for the Boys & Girls Clubs of Metro Atlanta serving 10,000 kids and teens annually across 10 different Metro Atlanta counties.

K. Sims is married to Valerie Sims. The couples said they are both looking forward to reinvesting in the Jackson County community.

Sims enjoys playing piano at Poplar Spring Baptist Church in Arcade, spend time with his family and help his community. Sims' work is based on two words he often quotes, “Kids First."

Through her program “Serve, Save, Smile,” Dr. Howell encourages her patients to give back to the Jackson County community.

She has also awarded one deserving under-privileged middle school student each year with free orthodontic treatment for the past 13 years.

Dr. Howell serves on the Work Based Learning Committee for Jefferson City Schools as well as the Board for Extra Special People.

She and her husband, Jon, have two daughters, Georgie and Lucy. 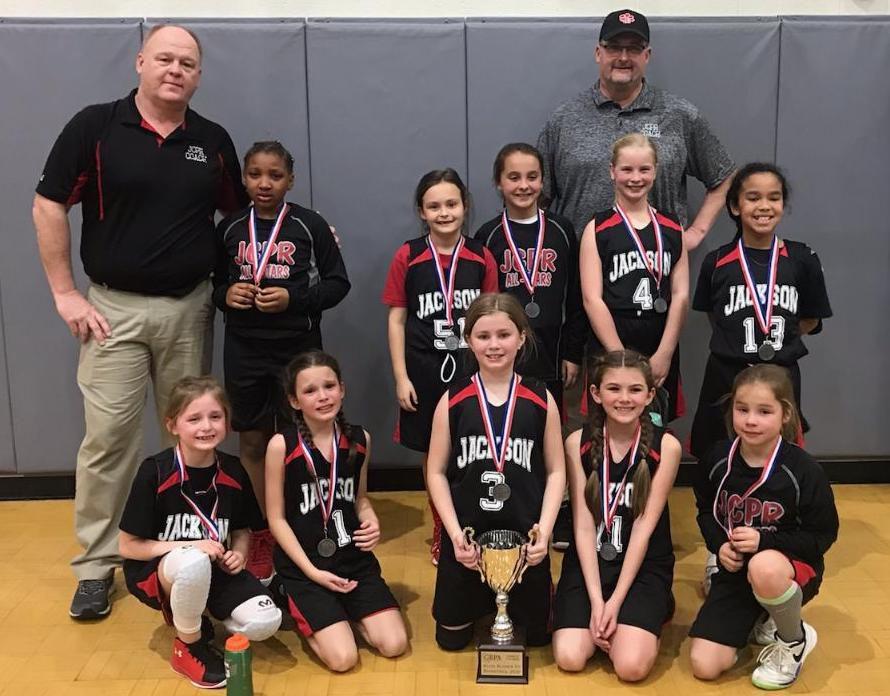 The Jackson County Parks and Recreation girls’ 8-year-old girls all-star basketball team finished as runners-up in the March 6-7 state tournament in Habersham County. The team defeated Villa Rica in the opening round and host Habersham County in the semifinals before falling to Gordon County in the state finals to finish as runners-up for the second year in a row. Prior to that, the team won the District 7 tournament in Barrow County Feb. 27-29. Jackson County defeated Habersham County to capture the title. The team defeated Jefferson and Hart County in the seeding games and defeated Barrow County in the semifinals to advance to the district title game. Team members are Amiyah Fambro, Avery Scott, Jacylane Woodall, Isabella Menard, Cameron McGaughey, Isabel Maxey, Landry Greene, Mary Waters, Braelyn Bruce and Carly Kidwell. Coaches are Ricky Sanders (head coach), Jason Woodall (assistant coach) and Pam Menard (assistant coach). Heather Backer served as scorekeeper.

The American Cancer Society's annual Relay For Life that was to be held on May 1, has been postponed until Saturday, August 8.

The times will be the same 6 to 10 p.m. at the Jackson County Courthouse. The survivor dinner will begin at 5 p.m. Everything will remain the same for events, survivor walk and the luminary service.

"The event is the greatest way there is to highlight the survivors and to remember those lost to cancer," states Sandra Fite, one of the volunteers. "It is a fun event that the whole can enjoy and help the teams raise money in the fight to cure cancer. The teams will continue to do fund raisers and will have fund raising games, etc. at their campsites at the relay. Mark your calendar and plan to come out and support the relay event. Teams work really hard to raise money and be a part of the event."

Survivors are needed for the lead off of the survivor walk. The luminary service is a part of the relay with bags of candles lining the walking trail honoring the survivors and those that have been lost to cancer.

"Each year, I am truly humbled by the tremendous talent in the Ninth Congressional District and impressed by the artwork these students produce," said Rep. Collins. "I want to encourage all interested students to participate in this competition."

All students grades 9-12 who reside in the 9th Congressional District of Georgia are invited to participate in this competition.

To comply with current social distancing guidelines due to COVID-19, Rep. Collin's office asks that all participants submit their artwork virtually. Artwork must be submitted via email to Tena Riley by April 21, at 5 p.m. The winner's artwork will be displayed in the U.S. Capitol for one year.