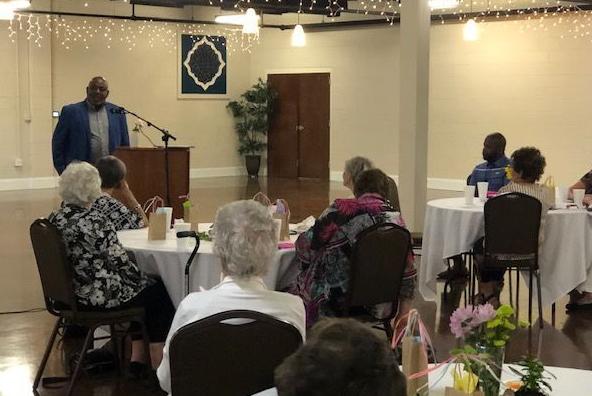 Jeff Daniels, director of the Boys and Girls Club of Jackson County in Jefferson, is shown speaking at the April 12 meeting or the Jefferson Woman's Club.

Jefferson Woman's Club vice president Barbara Royster and pres Cindy Crane are shown with the collection of snacks donated for the Boys and Girls Club of Jackson County.

Jeff Daniels, director of the Boys and Girls Club of Jackson County in Jefferson, is shown speaking at the April 12 meeting or the Jefferson Woman's Club.

Jefferson Woman's Club vice president Barbara Royster and pres Cindy Crane are shown with the collection of snacks donated for the Boys and Girls Club of Jackson County.

After crediting his mother and one of his early childhood teachers for encouraging and inspiring him to do well in his studies, Daniels gave a brief history of the Boys and Girls Club in Jackson County. The club was started in 2003 with a facility opening in Jefferson in 2010.

The attendees are separated into 3 groups, ages 6-8 years old, 9-11 years old, and above 12 years old. Currently, 58 children are members at the Jefferson facility, which has a capacity of 100.

The club offers after-school programs which include a “Power Hour” in which children work on homework for 45-60 minutes, followed by snacks, and later, a hot meal. The club partners with several restaurants which donate the meals to the after-school program.

Other programs include “Money Matters,” which teaches teens about money management skills, how to complete job applications and how to dress properly for an interview; “Smart Moves”, involving decision making and talking with the appropriate adults about bullying; and “Manhood,” which centers on hygiene, adult responsibility and character.

Mr. Daniels advises children on success, telling them, “As you go up this ladder, never look down on anyone unless you’re taking them up with you.”

The club offers a nine-week summer camp which starts on June 1. Children attending the camp receive breakfast, lunch and snacks. Field trips afford both fun and educational activities. The cost of the camp is $175 per child. For more information, call 706-367-8553.

The Boys and Girls Clubs welcomes volunteers and donations from the community. Volunteers undergo background checks and will be subject to any health protocols in place.

Following his presentation and response to questions, Daniels thanked the Woman’s Club for their support over the past several years. President Cindy Crane then presented Daniels with a cash donation of $375, contributed by individual members and designated to fund three summer camp scholarships.

Additionally, members donated a great many snack items for the Boys and Girls Club.

During the regular business meeting, Tammy Babb updated the group on the book baskets which have been placed in many locations in and near Jefferson.

She also said that the Free Library will be located in the Jefferson City Park and in Willie Huey Park. Also, the Teachers Appreciation Breakfast will honor teachers on May 4.

Projects that the Woman’s Club will fund in May include the Boys and Girls Clubs of Jackson County, the ARK of Jackson County, The Cancer Foundation of NE Georgia, iServe, CASA, Peace Place, and the Tree House, in addition to a $1,000 scholarship to a female graduate.