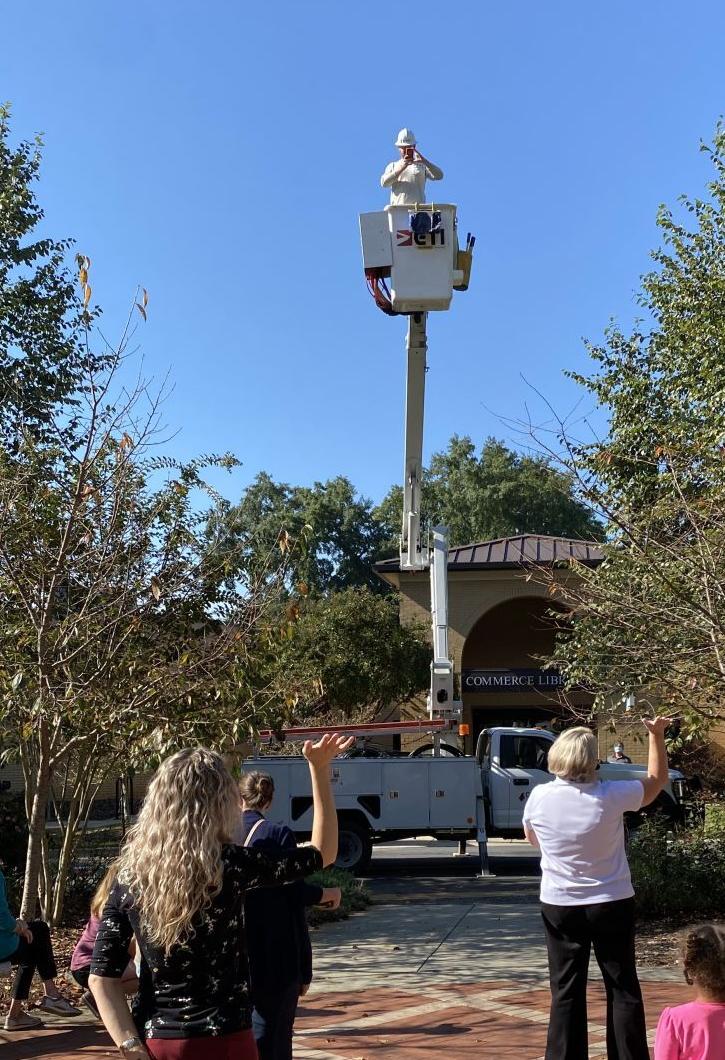 Utility worker Taylor Wood in the bucket truck is shown waving to the children at the Truck Parade at the Commerce Public Library.

Utility worker Taylor Wood in the bucket truck is shown waving to the children at the Truck Parade at the Commerce Public Library.

The Commerce Public Library hosted the City of Commerce's Truck Parade, in honor of Georgia City's Week, on October 6 in the Library's Memorial Garden.

Children and parents watched as city vehicles paraded through the parking lot and while demonstrating things they do. Those participating were the following departments: Fire, police, utilities, gas, public works and the liibrary. Children received candy, toy trucks, book marks and frisbees.

The Friends of the Commerce Library's spring plant swap had to be canceled because of the coronavirus, but a fall swap is now planned in the Memorial Garden for Saturday, Oct. 17, from 10:30 a.m. until noon. Gardeners are welcome to bring bulbs, cuttings, houseplants, etc. to swap for other plants. There will also be a mum to raffle with tickets a dollar a piece or six for $5.

Inside the library is a new display on diversity with numerous books available for check-out. The "Little Old Woman Who Wasn't Afraid of Anything" story walk continues inside as well with a no touch take home scarecrow project to color, cut, paste and retell the story. Children's Librarian Catherine Harris also has a no touch take home project from her recent Lion and Mouse story.

New nonfiction include: Kate Sinkler "Dawson's American Sherlock - Murder, Forensics, and the Birth of American CSI," Jonathan Adler's "His Very Best - Jimmy Carter A Life," Philip Margotin's "Bruce Springsteen All the Songs - the Story Behind Every Track" and Catherine Katz' "The Daughters of Yalta - the Churchills, the Roosevelts and the Harrimans." This last is described as "the untold story of the three young women who accompanied their famous fathers to the Yalta Conference in February 1945, and of the conference's fateful reverberations in the waning days of World War II.

Also now available are two books that may be of special interest to bicycling enthusiasts. They are written and signed by author Jerry Dusterhoff. "Bicycle Journeys" with Jerry recounts his experiences from Vermont to the Pyrenees, including a chapter on the Tour de Georgia. "Gotta Go!" gives Dusterhoff's advice about "cycling vacations in fantastic locations."