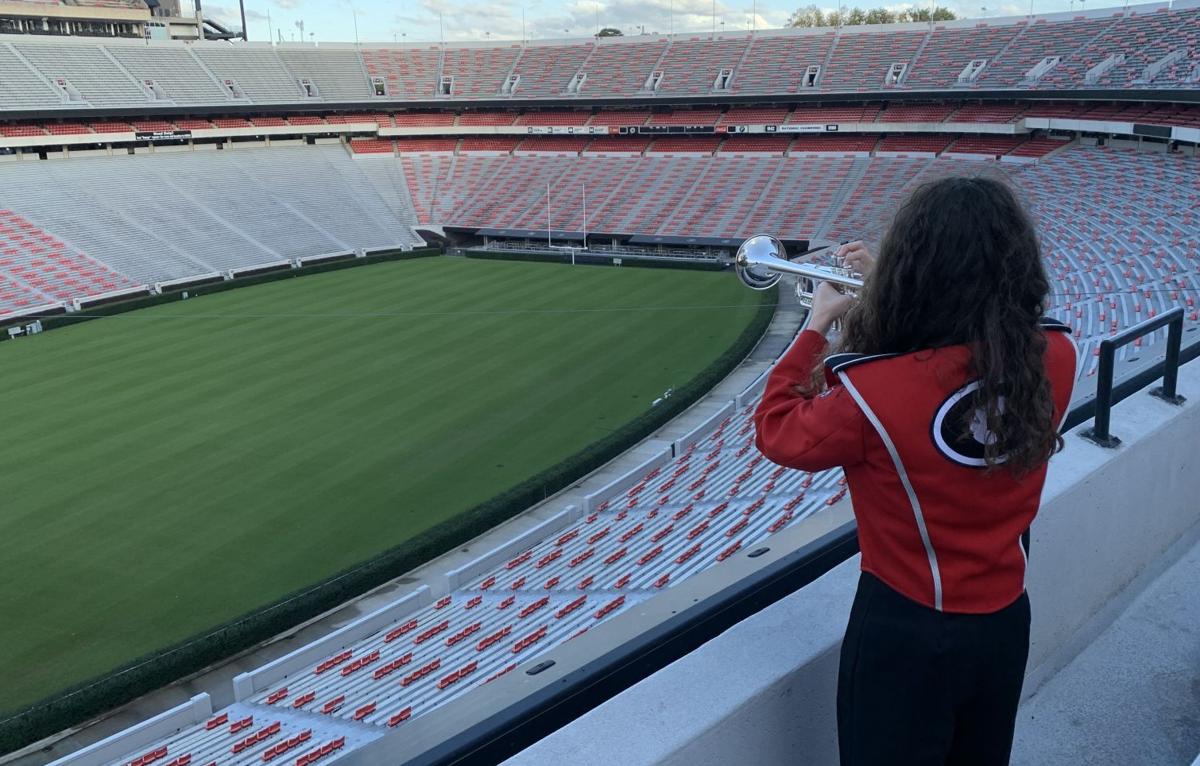 Rachel Anderson, a member of the University of Georgia’s Redcoat Marching Band, was selected as a “Battle Hymn” soloist and featured in a video kicking of the Masters Tournament during her senior year. 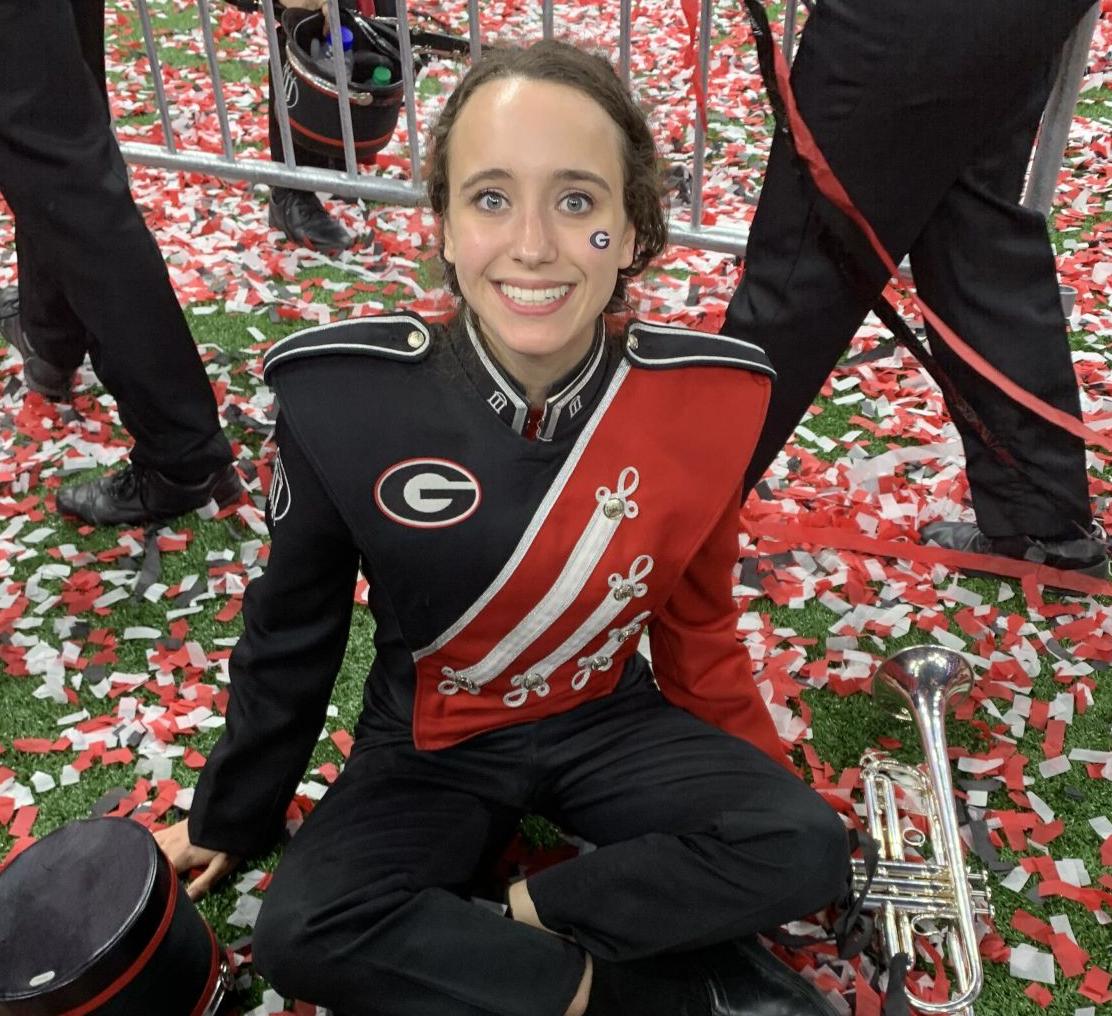 Rachel Anderson is shown at the Sugar Bowl on New Year’s Day 2020, which is one of her favorite experiences as a member of the University of Georgia's Redcoat Band. 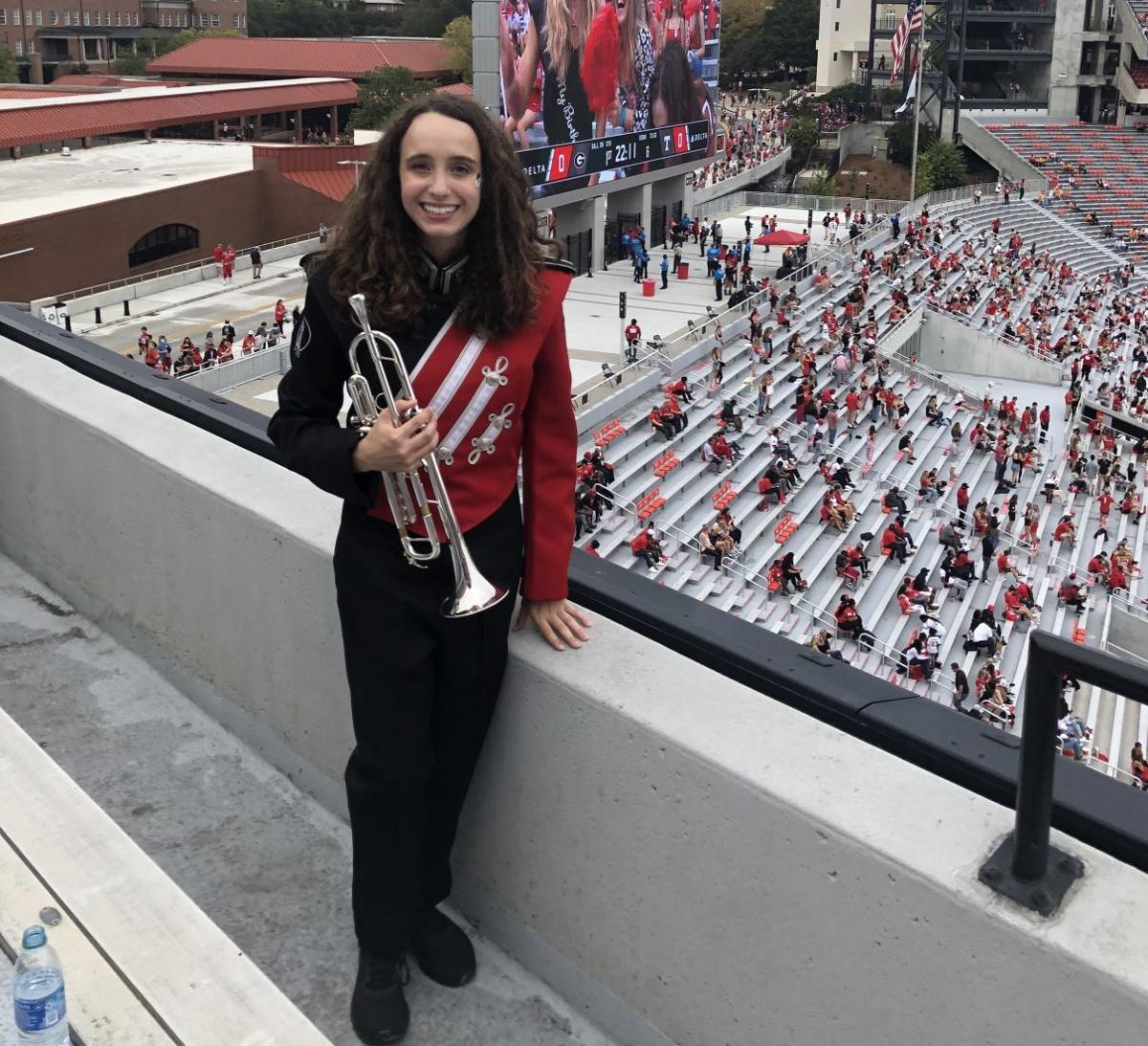 Rachel Anderson, a graduate of East Jackson Comprehensive High School, was the “Battle Hymn” soloist before the University of Georgia-Tennessee game this fall. 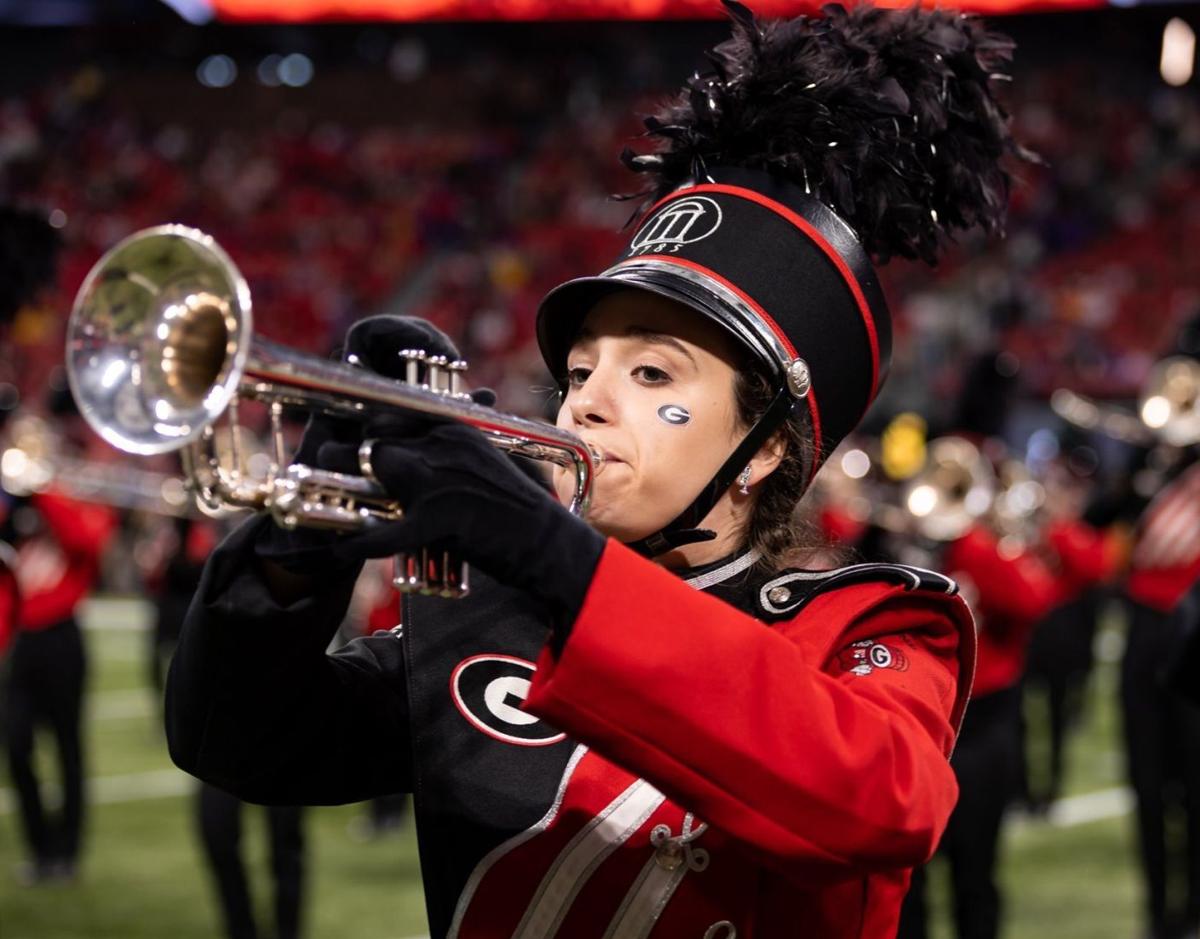 Rachel Anderson is shown performing with the University of Georgia's Redcoat Band. 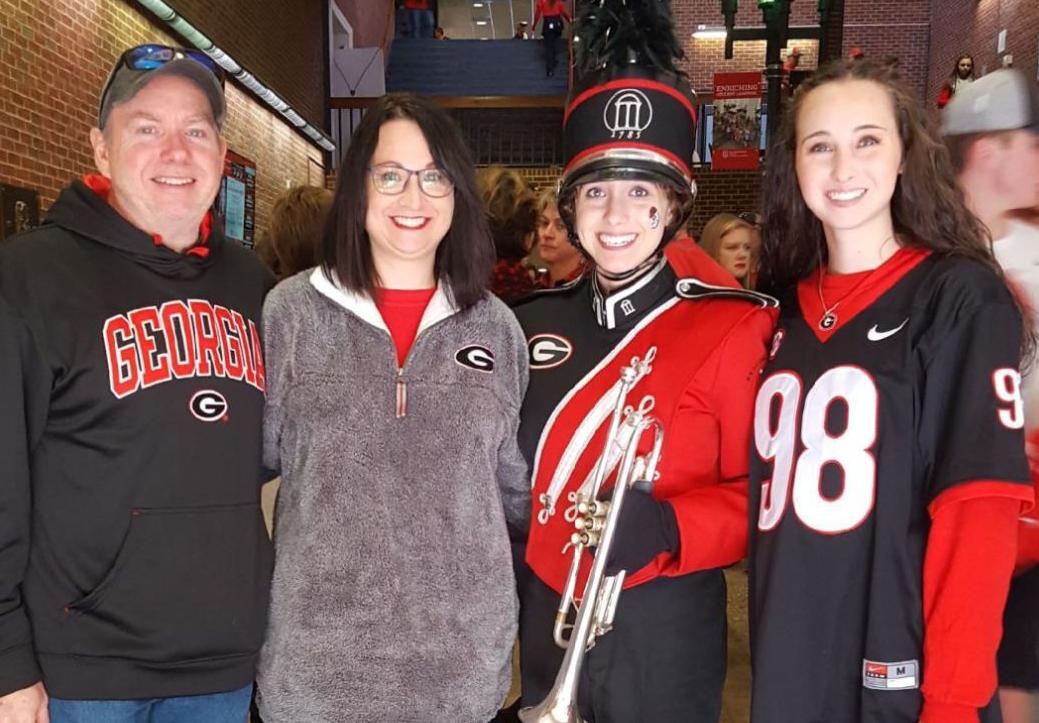 Rachel Anderson is shown with her family, Scott and Lydia Peterman and Leah Anderson, at a UGA game.

Rachel Anderson, a member of the University of Georgia’s Redcoat Marching Band, was selected as a “Battle Hymn” soloist and featured in a video kicking of the Masters Tournament during her senior year.

Rachel Anderson is shown at the Sugar Bowl on New Year’s Day 2020, which is one of her favorite experiences as a member of the University of Georgia's Redcoat Band.

Rachel Anderson, a graduate of East Jackson Comprehensive High School, was the “Battle Hymn” soloist before the University of Georgia-Tennessee game this fall.

Rachel Anderson is shown performing with the University of Georgia's Redcoat Band.

Rachel Anderson is shown with her family, Scott and Lydia Peterman and Leah Anderson, at a UGA game.

Rachel Anderson’s senior year as a member of the University of Georgia’s Redcoat Marching Band hasn’t been a typical year but she has had some amazing opportunities including being selected as a “Battle Hymn” soloist and being featured in a video kicking of the Masters Tournament.

“The judges sit on the sideline of Redcoat field, and those auditioning walk up to the center of the field and play their rendition of the ‘Battle Hymn,’ as musically as they can,” Anderson said. “Usually, it is a blind audition, but to put more pressure on us and make us more nervous this year (as we would be playing the solo at the actual game), it was not blind, and the judges watched us. After one round of everybody playing the solo, the judges decide who gets called back for a second round (usually about six people). Once you make it to the second round, everyone plays the ‘Battle Hymn’ solo twice back to back. The judges then decide on anywhere from three to five musicians to earn the solo at the games. This year, there were four soloists (one for each game).”

This past weekend, when the Masters opened in Augusta, Georgia, a special introduction video to the event was released with an opening that featuring Anderson performing a trumpet solo of the Masters theme song from Sanford Stadium. Anderson found out about this opportunity only one week before the video aired when her band director asked her to send him a recording of the piece of music.

“My band director texted me and told me he had a solo opportunity for a ‘Battle Hymn’ soloist that would be a big deal, but he couldn’t tell me what it was yet,” she said. “He sent me a short piece of music (in an awful key and high register... it turned out to be the Master’s theme song “Augusta” which is originally written for guitar) and told me to record myself playing it and send it back to him that same afternoon because he needed whoever played it to sound exceptional.”

Anderson did the recording and later heard back from her band director who told her it was “beautiful” and that they would be recording it in Sanford Stadium during the next week.

“We recorded the following Monday, and though I was nervous, I wasn’t nearly as nervous as I was the day I played the 'Battle Hymn' at the Tennessee game because it wasn’t in front of a live audience,” she said. “We did probably around 15 takes from various angles and with me playing at different tempos. It ended up being a lot of fun!”

Anderson first joined band in sixth grade, when she was 11. She wanted to play flute but found that she was better at trumpet.

“I actually had always wanted to play flute ever since the middle school band performed a Christmas concert for us when I was in kindergarten,” she said. “However, my school had an instrument tryout night to get a feel for all the different instruments when I entered 6th grade, and I discovered that I could barely even make a sound on the flute. On the brass instruments, they told me I made an excellent sound. I considered playing French horn like my mom and aunt, but when my band director brought in a trumpet to play for us in class one day, I fell in love with it and never looked back.”

She was a member of the band at East Jackson Comprehensive High School and first thought about auditioning for the Redcoats at UGA as a freshman but decided to wait until her second year of college.

“My senior year of high school, I considered auditioning for the Redcoats after finding out I had been accepted at UGA because trumpet had always been a passion of mine,” she said. “Entering college was overwhelming, though, so I decided I did not want to take on this endeavor and give myself a chance to relax a little bit in college after a particularly grueling senior year. I’m glad I didn’t participate in Redcoats my freshman year of college because it allowed me to form lasting relationships in my campus ministry, Christian Campus Fellowship, but as the year went on, I began missing performing more and more. By that spring, I knew I HAD to do Redcoats, so I auditioned and made it in. My first season began my sophomore year of college in August of 2018.”

During her time as a member of the Redcoats, she has several memories that stand out as her favorites, including “traveling to New Orleans for the Sugar Bowl two years in a row, especially winning this year!”

“I will also always remember the very first time playing as a full ensemble with the Redcoats at band camp 2018 and how loud it was and just being overcome with chills from being a part of the iconic sound I grew up hearing on television,” she said. “I think my all-time favorite memory, though, was the Notre Dame game 2019. It was the largest crowd that had ever been in Sanford Stadium, and the energy was electrifying. As we marched pregame, they debuted their new flashing red lights (which we didn’t know was going to happen), and the crowd went CRAZY! I cannot even describe how amazing it felt to be on the field for that moment.”

She looks back on her elementary school years in band and said she never dreamed where band would take her.

“10 years ago, when I started playing trumpet and was sitting in my room crying because I couldn’t hit a ‘high C’ (which was really actually a middle C), I never would’ve dreamed the trumpet would have led me to so many amazing opportunities,” she said. “This year has also been a pretty sad year for me (and everyone really), so I am just thanking God that he has brought these opportunities to me that give me so much joy and create a bright spot in the year.”

Anderson is majoring in exercise science with a minor in human development and family sciences. She hopes to continue on to receive her Master’s degree in Occupational Therapy.