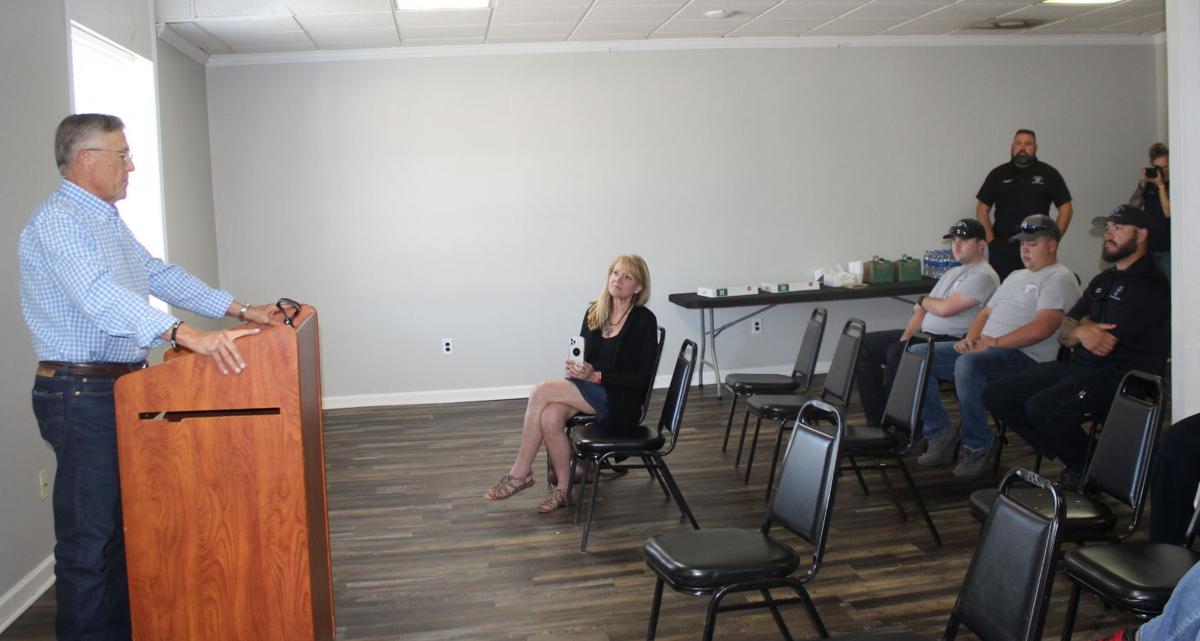 Rusty Compton is shown speaking at the Commerce Civic Center and thanking those who saved his life when he collapsed from cardiac arrest on June 6.

Rusty Compton is shown speaking at the Commerce Civic Center and thanking those who saved his life when he collapsed from cardiac arrest on June 6.

A man returned to Commerce last week to thank the public service workers who saved his life in June when he suddenly collapsed from cardiac arrest.

Rusty Compton and his wife, Melody, who had only been married 20 days, were at Little Ward Funeral Home for a funeral visitation when he suddenly collapsed from what they would later learn was V-Fib, a condition which few people survive from. It was the quick action of Commerce police officers and Jackson County rescue workers and EMTs which is credited with saving Mr. Compton’s life.

The couple came back to Commerce last week to meet at the Commerce Civic Center with those public safety workers to thank them for what happened on that June day.

“I look around the room and realize without you guys that I wouldn’t be standing here,” Mr. Compton said, as he looked at the line of law enforcement and public safety workers in the room. “You have a tendency to overlook the hard work and true dedication that certain people have to the community. From beginning to end, from the phone call to 911 to police officers to the EMTs to the hospital staff, it was flawless. The professionalism that was shown is important for the community to know. I can’t thank each and every one of you enough for what you did for me. I know if it was anyone else you would have done the same. It is a calling you have. Again, thank you.”

Mr. Compton also spoke on defunding the police, which is discussed in some communities.

“One thing that pops into my head is defunding police and cutting back on services to direct money to other places,” he said. “Something tells me that if we had defunded the police that AED might not have been in that police car. We have to think twice about those decisions.”

Mrs. Compton also spoke and offered her thanks to those in the room who saved her husband’s life.

“I thank God for you all every day for saving my husband and letting me still have him,” she said. “He is a blessing in my life. I almost only had 20 days with him. I thank you for your God-given talents. I thank you for taking care of other people. Please know that you don’t go unnoticed. We appreciate you unmeasurably and pray for you every day. I appreciate you very much.”

Tim Grice, Jackson County Emergency Medical Services assistant director, also spoke, stating, “It is very rare that we get to celebrate so many accomplishments; from the initial CPR that started the chain of recovery to the EMTs and paramedics taking care of him to the cardiologists knowing exactly what to do.”

Grice said he wants to bring community awareness to how many things are necessary to save lives and how thankful we should be that we have these things in Commerce and in Jackson County.

Mr. Compton was taken to Northeast Georgia Medical Center, where officials say nearly 1,000 people per day, or someone every 2 minutes suffers from sudden cardiac arrest like Mr. Compton did with the survival rate being less than 10 percent.

“The fact that Mr. Compton is here today to share his story is in large part to the active participation and tiered response of all involved that day,” states Kyle Powers, a spokesman for Northeast Georgia Health System. “From immediate bystander CPR, to early defibrillation with an AED, to outstanding pre-hospital clinical care provided by EMS, and continued critical care and management at the hospital, each piece is just as important as the others. Had one of these individuals segments of care not been intact or as efficient as it was, then we would likely not be here to celebrate today. As we continue to promote community CPR and AED awareness, it is stories such as this that remind us of what can happen when collaborative systems of care are in place.”