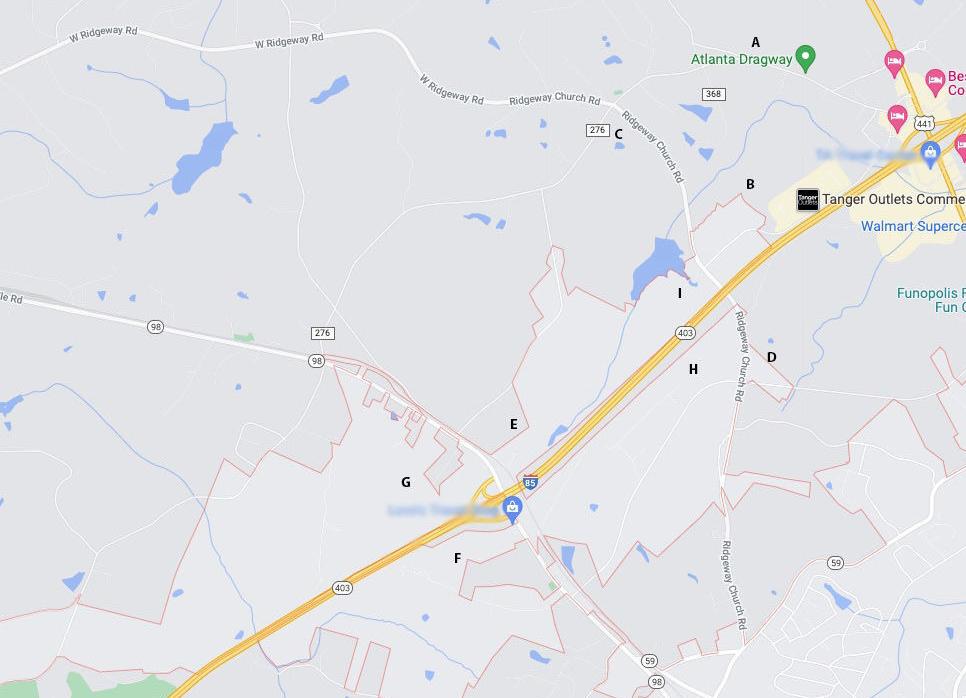 The corridor from Banks Crossing to Hwy. 82 and the Oconee River at Hurricane Shoals Park along I-85 is poised to become part of a major industrial corridor in the Southeast.

Anchored by the massive SK Battery plants, the area is seeing a boom in industrial development; and what's not under development is situated such that future growth is inevitable.

The development of that corridor will someday connect to industrial development to both the north and south along the interstate in both Jackson and Banks counties.

The Jefferson area at I-85 between Hwy. 129 and the Dry Pond exit interchanges is already growing with major warehouses and distribution centers. To the north, a large industrial park of 550 acres is currently under review for the Martin Bridge Rd. interchange on I-85 in Banks County. That interchange is likely to see more industrial development in the coming years.

Together, the Jackson-Banks developments along I-85 will likely someday become a major industrial corridor, perhaps the largest in the Southeast.

At the center of that will be the Commerce area. Here's a rundown on how that area is shaping up:

At the northern end near I-85 and Hwy. 441 in the edge of Banks County is the impending development of the Atlanta Dragstrip property. That property is currently for sale and no specific plans have yet come to the Banks County Planning Commission, although several project ideas are said to be in the works.

Just south of the Dragstrip is industrial property behind and around Tanger Outlet Mall. One distribution center is already located there, Restaurant Depot, a supplier of restaurant supplies and equipment.

Just to the west of the dragstrip across Ridgeway Church Rd. Commerce Crossroads is under development with one building under construction and several more planned. The property covers 214 acres at Ridgeway Church Rd. and Yarbrough-Ridgeway Rd. Two large buildings of around 1 million sq. ft. are planned in that park (formerly known as "Dakota Commerce.")

Just to the southeast of that project on Ridgeway Church Rd., the City of Commerce recently approved an industrial rezoning for 22 acres (as part of a 35-acre total site) for Rooker Properties to build a 300,000 sq. ft. warehouse.

On the north side of Ridgeway Church Rd. toward Hwy. 441 on Steve Reynolds Industrial Pkwy. and along I-85 is a large tract of industrial property that will undoubtedly be developed.

On the southwest corner of Ridgeway Church Rd. at I-85, a large tract (Hill's Lake area) is for sale for industrial development.

On the north side of I-85 at Hwy. 98 (Commerce-Maysville road) is a large undeveloped tract along Hardman Orchard Rd. It's owned by members of the Hardman family, one of whom is an Atlanta-area developer. That property isn't currently being developed. There have been some informal conversations about realigning the rail tracks in that area to accommodate future development.

That entire area north of Hwy. 98 all the way to Hwy. 441 along I-85 crossed by Ridgeway Church Rd., Steve Reynolds Industrian Pkwy. and bounded to the north by Yarborough-Ridgeway Rd. is either for sale, being developed or likely to be developed.

South of Hwy. 98 on the north side of I-85 is the massive Rooker Properties industrial park project. Bana Road is currently under construction in that large tract which covers a whopping 600 acres south along I-85 toward Hwy. 82. That Rooker develpment calls for 10 warehouse buildings of varying sizes.

Across from the Rooker project on the south side of I-85 and south of Hwy. 98 is the large Bouchard property tract of 240 acres. At one time, the property was slated to be built-out as a mixed-use community, but earlier this year a DRI filed with the state indicates that some of that property will be used to build 2.2 million sq. ft. of warehouse space in three buildings along Nunn Rd.

This is not all of the property for sale in that area, but it covers the major tracts that are under development, for sale for development or likely to be developed in the future for commercial and industrial use.