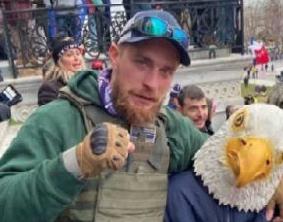 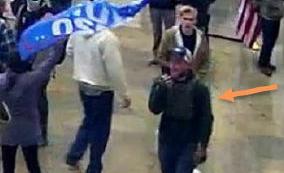 Mitch Simon is shown in video footage inside the U.S. Capitol on Jan. 6. Photo comes from FBI news release about Simon facing charges from the incident.

Mitch Simon is shown in video footage inside the U.S. Capitol on Jan. 6. Photo comes from FBI news release about Simon facing charges from the incident.

A Jefferson man pleaded guilty last week for his involvement in the Jan. 6 insurrection at the U.S. Capitol Building.

According to the Atlanta Journal-Constitution, Glen Mitchell Simon took a plea deal in federal court on Friday, Oct. 15, pleading guilty to a misdemeanor of demonstrating inside the Capitol. Simon could face a six-month sentence and fines up to $5,000, according to the AJC.

Following the Jan. 6 insurrection, Simon reportedly posted videos and photos of himself in the Capitol to his Facebook page, then later deleted the posts. Video footage from inside the Capitol shows Simon in several locations.

On Jan. 14, the Atlanta FBI office attempted to locate Simon, but couldn't find him. They then called his cell phone and spoke with him. During the conversation, Simon reportedly denied having been inside the Capitol building.

Simon self-surrendered on May 5 to federal authorities in Gainesville.

Simon is originally from Maine and works for Omega Tree Service out of Homer, Ga.

Simon told the Sun Journal newspaper of Lewiston, Maine, that he didn't enter the Capitol building, but was on the front steps.

Simon told the newspaper that his marriage was on the rocks at the time and his wife was in Georgia ruining his business.

"I don't care if they say I'm a terrorist," Simon told the newspaper in January.

He was living in Maine at the time and drove to Washington D.C. for the Jan. 6 protest. He told the newspaper that he had gone to Washington to show support for then-president Trump. He said he had expected to find a large Antifa presence in the city, but they didn't show up.

Simon told the newspaper that the media had exaggerated the amount of violence at the Capitol, saying that compared to Black Lives Matter rallies, it was "Mickey Mouse stuff."

He said some of those he met on Jan. 6 were desperate people who had lost jobs and were in misery.

"Some came on their last dime just to stand up for their president," he told the Sun Journal.