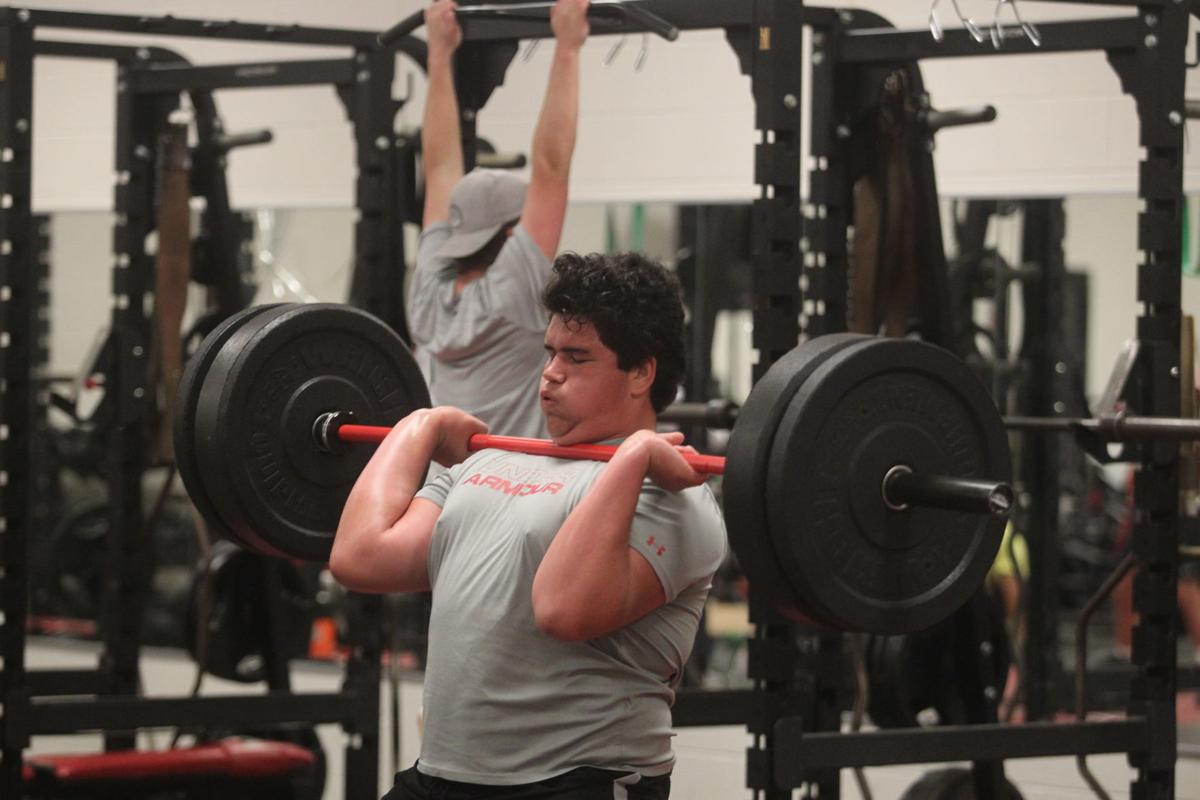 Jackson County football player Jonathan Lindquist performs a lift during a workout session June 8 as athletes around the state were allowed to return to restricted activities. All sports activities had been shut down since mid-March due to the COVID-19 pandemic. Athletes are now allowed to participate in strength and conditioning activities but must do so in groups of 20 or fewer. 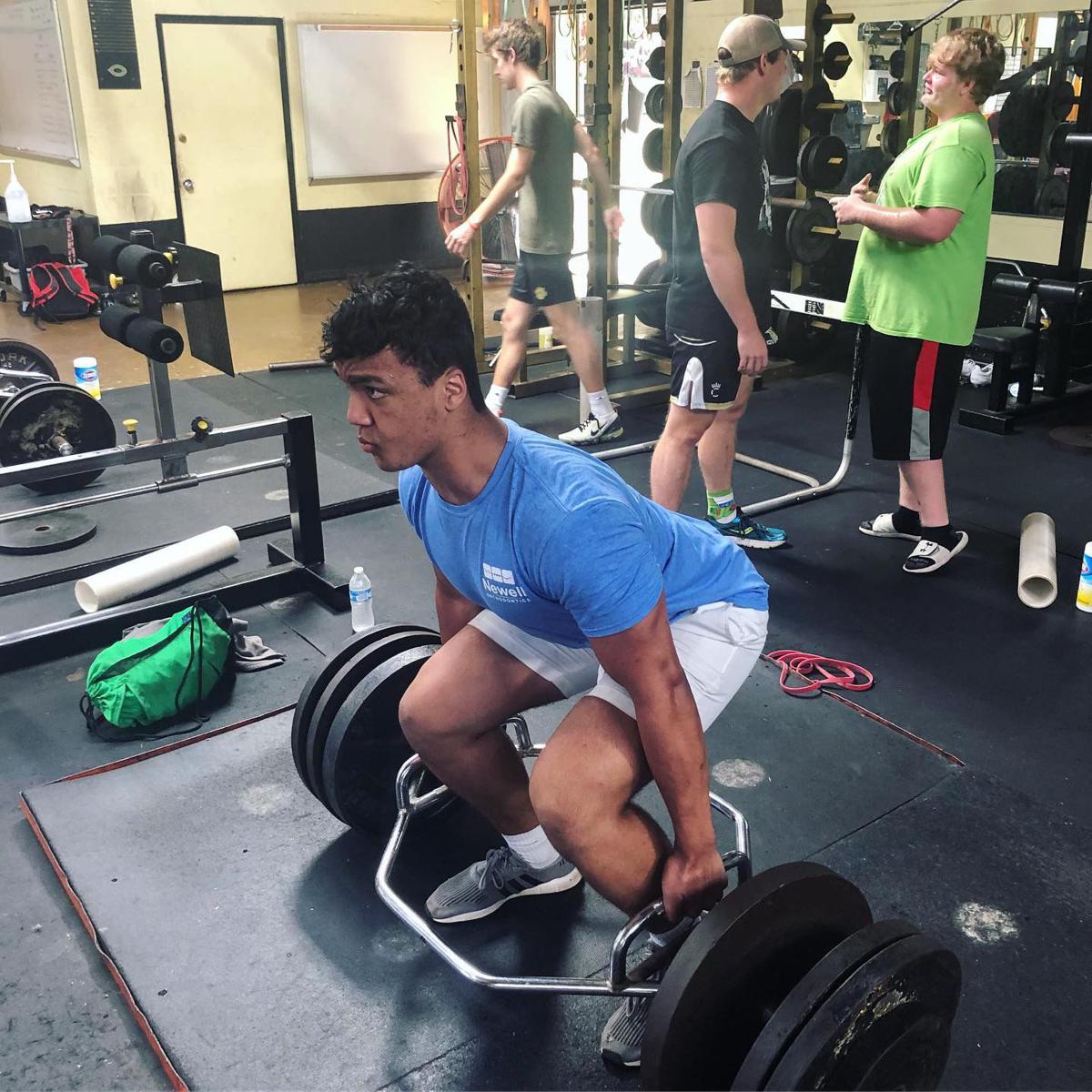 Commerce's Jake Frates attempts a lift during a June 9 workout. 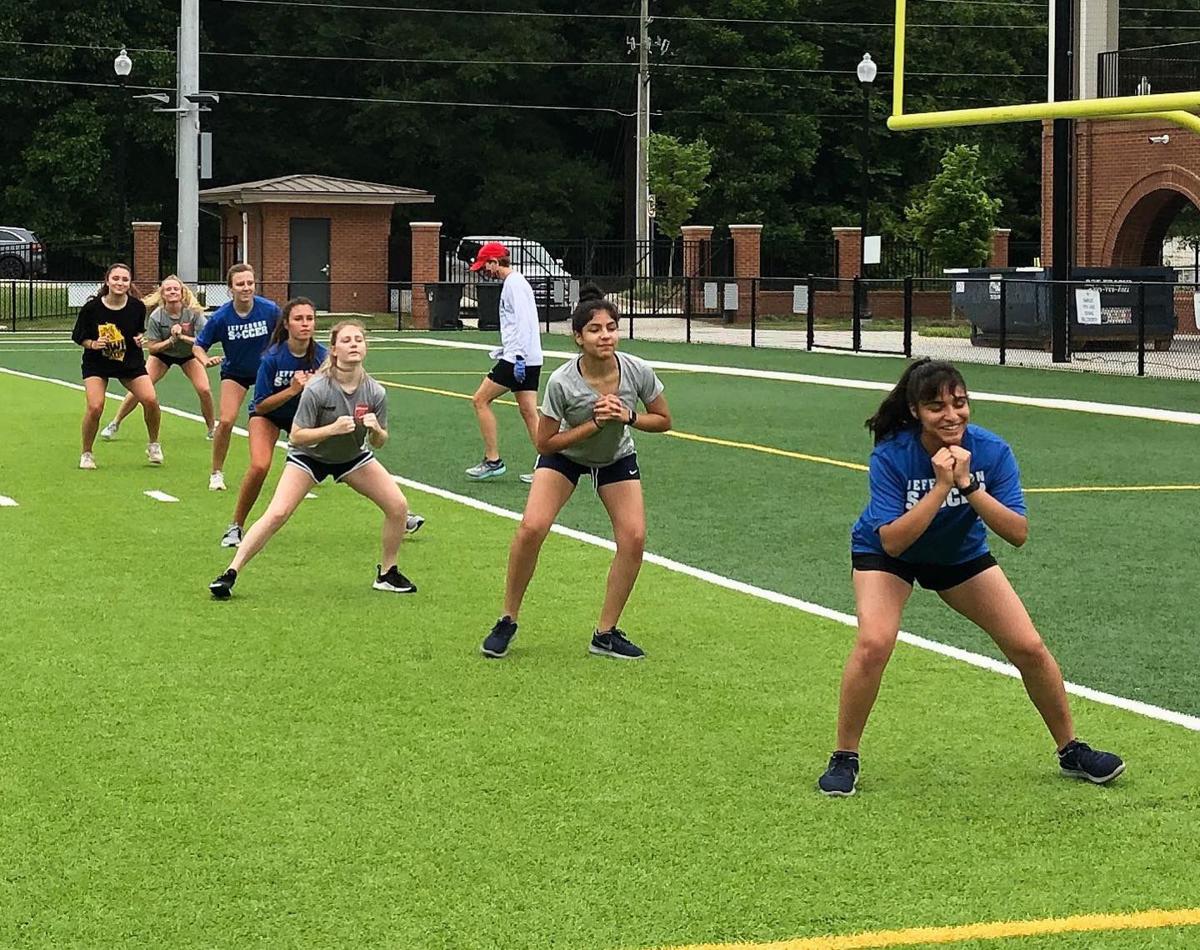 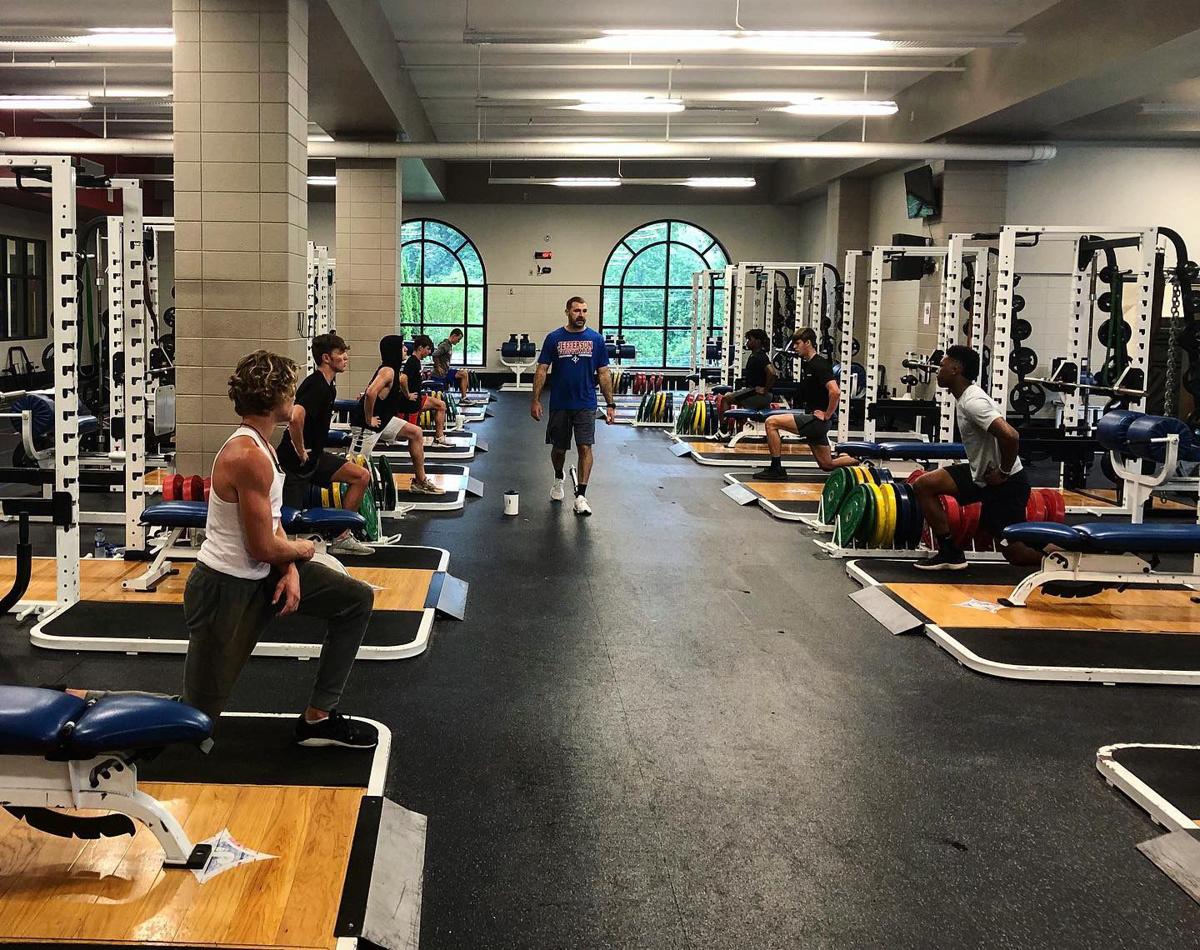 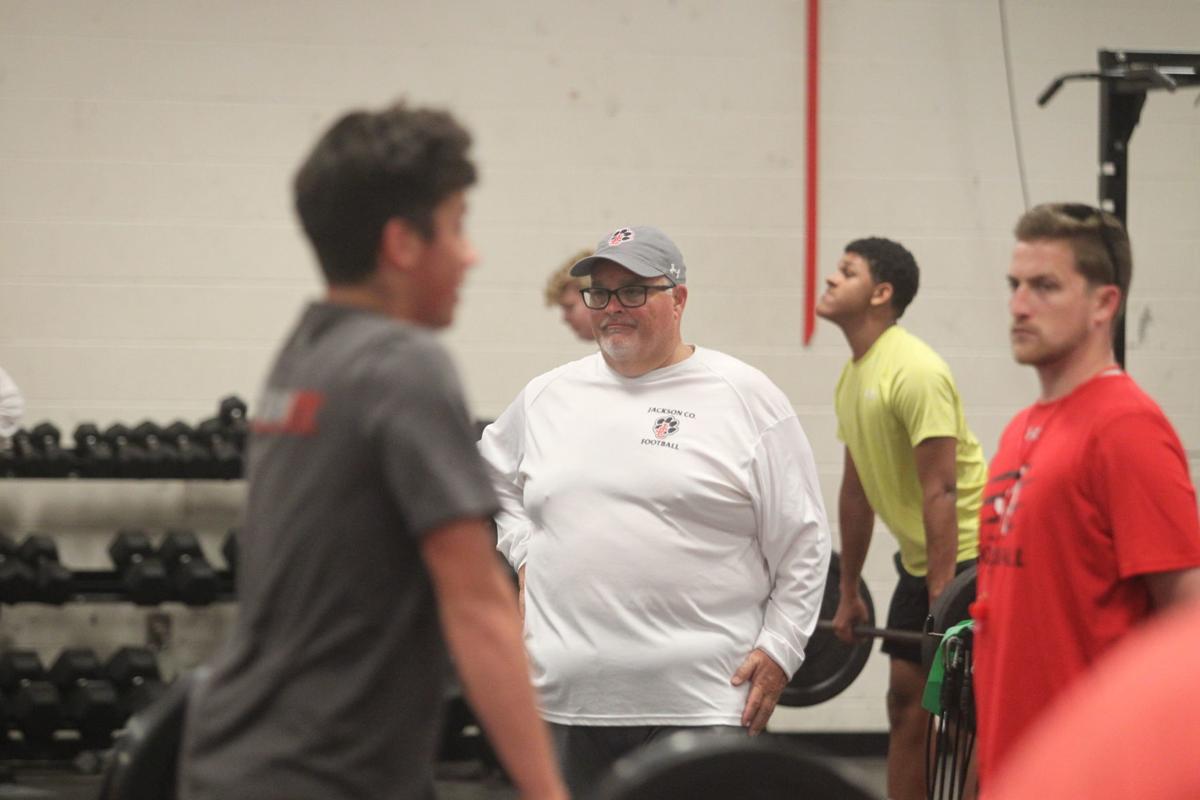 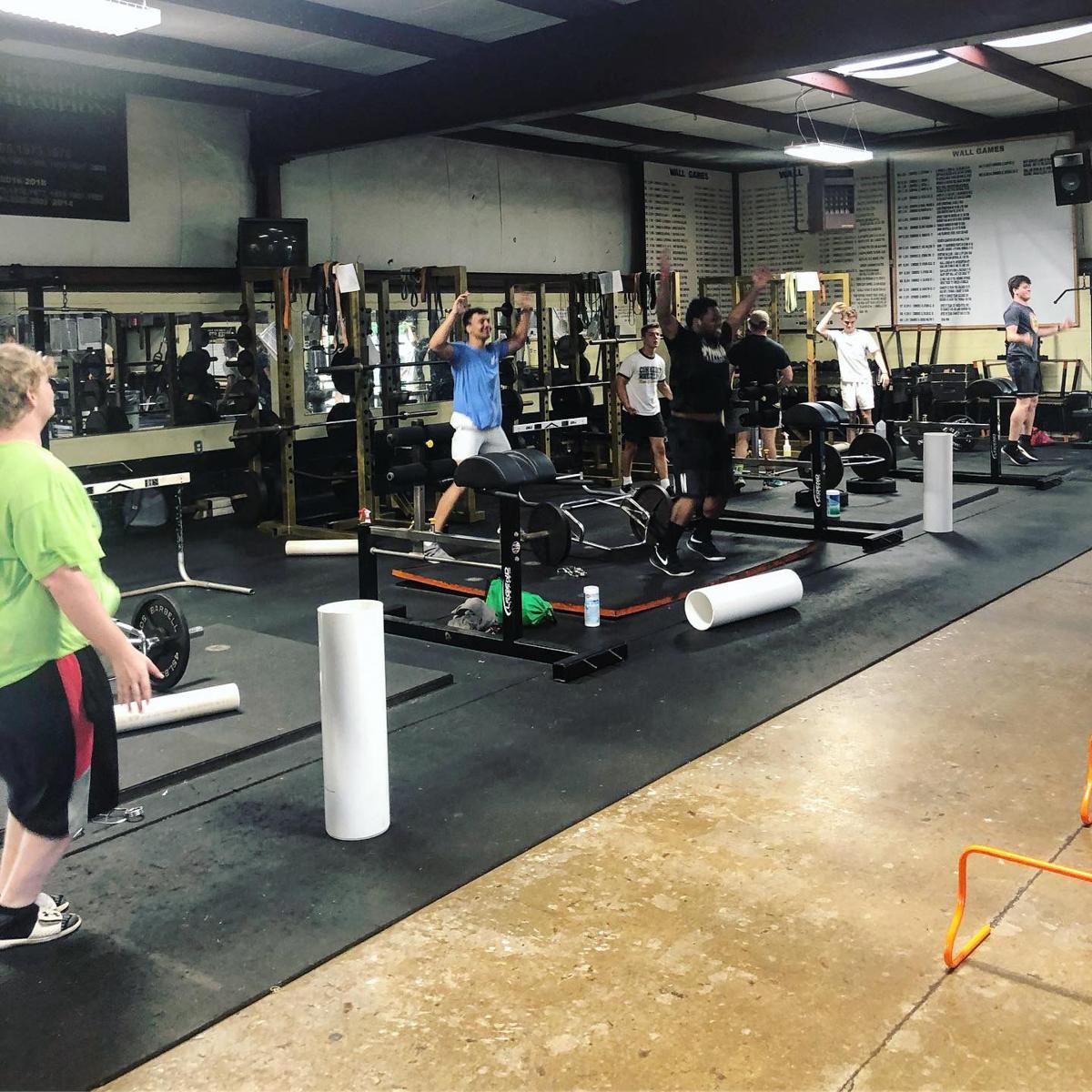 Commerce players work during a June 9 strength and conditioning session. 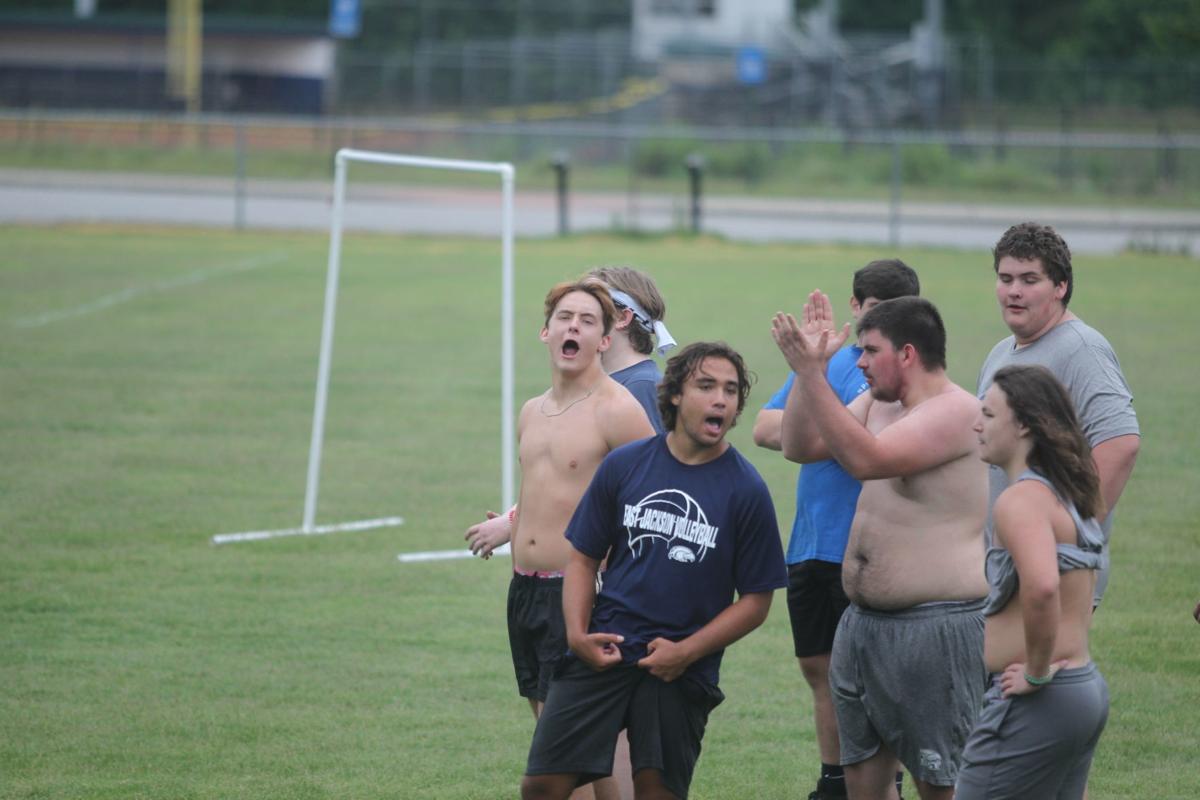 The East Jackson football gets fired up during a June 8 conditioning drill.

Jackson County football player Jonathan Lindquist performs a lift during a workout session June 8 as athletes around the state were allowed to return to restricted activities. All sports activities had been shut down since mid-March due to the COVID-19 pandemic. Athletes are now allowed to participate in strength and conditioning activities but must do so in groups of 20 or fewer.

Commerce's Jake Frates attempts a lift during a June 9 workout.

Commerce players work during a June 9 strength and conditioning session.

The East Jackson football gets fired up during a June 8 conditioning drill.

Strength and conditioning sessions became something of a reunion for teams this week.

High school athletes in Georgia have reconvened with coaches for workouts after prep sports went into lockdown for nearly three months in response to the COVID-19 pandemic.

Monday marked the first day back, and most local teams worked out three to four days this week.

“They were just so happy to be back in there,” East Jackson football coach Cameron Pettus said. “Some kids, you could tell were struggling, but they were still smiling.

"So, that’s always a good sign, though they might be physically pushing themselves to the limit and getting after it, they were definitely just so happy to be there and be with each other."

The Georgia High School Association (GHSA) has granted teams permission to work out while adhering to COVID-19 safety guides. Among other safety measures, workout groups are limited to 20 or less (including coaches) with athletes being screened before participating. No balls or equipment are allowed.

“I was really impressed with our kids,” Pettus said. “I can tell that they’ve been active. They haven’t just been sitting at home on their butts eating and being coach potatoes.”

He even noted a few surprises.

“Some of our skill guys have gotten bigger and stronger which is phenomenal,” Pettus said. “I’m super happy with where we’re at right now.”

Jackson County football coach Rich McWhorter said he was happy to simply reconnect with his players in person when they came into the weight room on Monday.

McWhorter said it’s hard for an athlete to benefit as much from solitary workouts — as many have been doing during quarantine — as they would a team workout.

“Working out on your own, or running on your own, is nothing like lining up next to somebody or having a coach to push you,” McWhorter said.

McWhorter said his team was, naturally, “a little behind” in their strength and conditioning.

At Jefferson, Dragon football coach Gene Cathcart said his team came back in better shape than anticipated. But Cathcart said the school’s strength-training staff made sure to ease the players into workouts during the first week back.

“We’re fortunate that we’ve got awfully good kids and they take care of their business pretty well,” he said. “Certainly, we’ve kind of treated it as if they were off three months. So, certainly it hadn’t been one of those things where we felt like we’ve overdone it.”

Commerce softball coach Melissa Mullis said her team used the week for weightlifting and conditioning and even incorporated some team-building principles as they reconvened.

Adherence to distancing guidelines made for a somewhat slower first day, she said, in keeping players apart “and making sure that we were super safe.” She said workouts were scaled back to about 50 percent of a normal workout help to avoid injuries. Mullis noted that many of her players had already started back playing travel ball, so they were already active.

She said her players were ready to converge as a team again.

“They’ve been chomping at the bit for when we could get back together,” Mullis said.

At Jackson County, softball coach Kristin Croteau said she was happy her team could finally reunite.

“Yes, we missed our girls and they missed each other,” she said. “It was great to see them and hear them laugh with each other. We are a family.”

Croteau’s team held its first workouts Tuesday, and those sessions were scaled back in intensity. Still, she said it was evident that her players had been working during the break.

“Tuesday was our first day and we didn’t go too hard,” she said. “We wanted to see what condition they were in. We ran, used resistance bands and (worked) abs. They did well, and were excited to be working together.”

Now, coaches are anxious to find out what awaits in July following a mandatory dead week to start the month. The hope among them is the GHSA will allow normal practices and practice games.

For softball teams, the month of July is usually a time for scrimmages.

“We’re hoping we can have equipment then, and we can play,” Mullis said.

The softball season would start in early August if a traditional schedule is followed this year. Croteau said her team “will be fine,” in preparing for that start date in a short time.

“These girls have heart and a great work ethic," she said. "Many of the girls are playing on their travel ball teams and getting in their repetitions.”

Meanwhile, football teams hope to be doing something more than running and lifting come July.

“You’d like to know something one way or another just so you can start planning and organizing,” McWhorter said. “We hope they cut us loose July 6. We’ll see. The current format we’re doing is good. We appreciate it. Don’t get me wrong. We appreciate it quite a bit, but you’re very, very limited.”

While nothing schematically can be done right now, Cathcart notes that all teams are “in the same boat.”

Given the long layoff, the coach said conditioning is a needed first step.

“With what we’ve dealt with,” Cathcart said, “I think that’s probably the exact thing we probably all needed to be doing.”