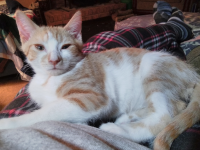 I'm sure this little girl is over the moon at her kills as her father sounds. However, I'm a bit old fashioned. I don't think a child this young should handle fire arms. I also question the lack of a safety vest.