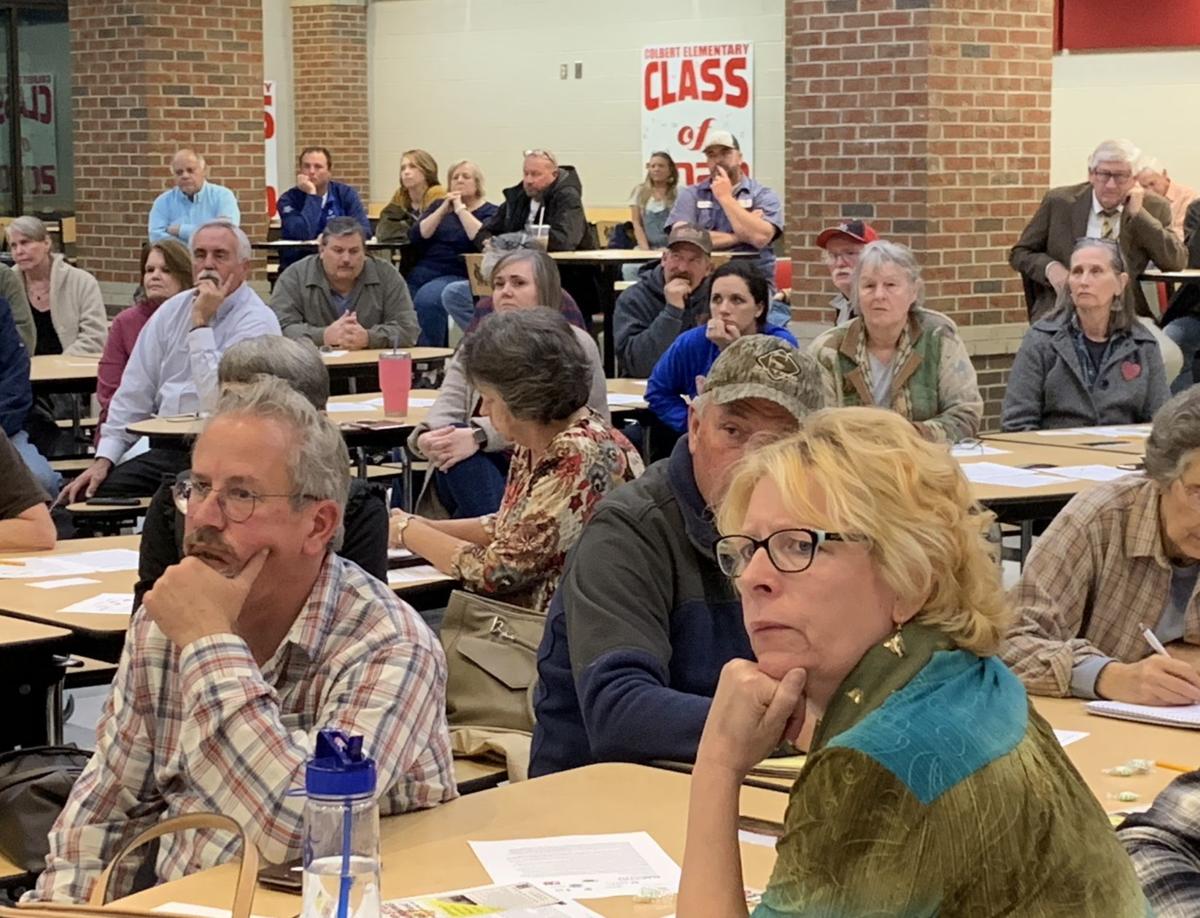 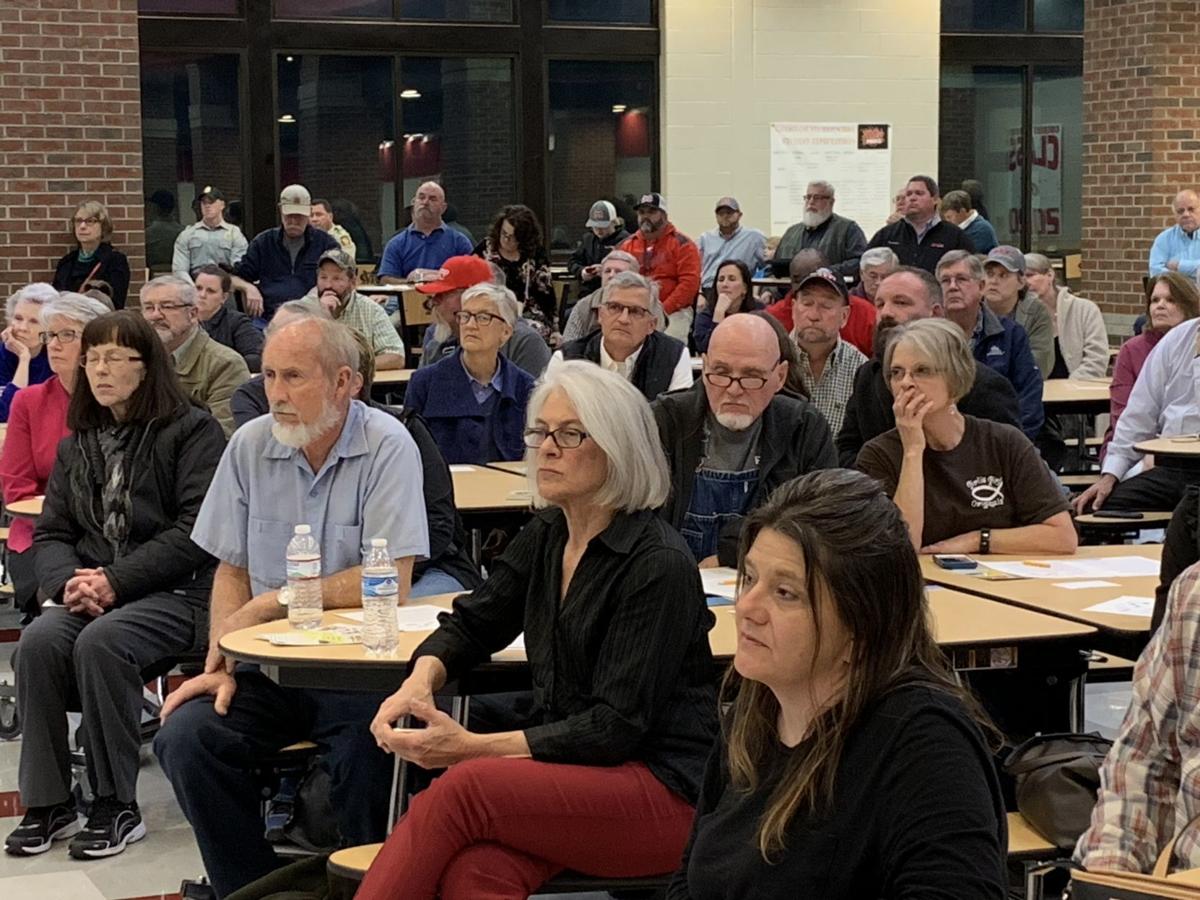 A number of neighboring property owners of the new power plant in Colbert feel like their health and quality of life are being negatively impacted by Georgia Renewable Power’s decision to burn creosote-soaked railroad ties in its biomass facility. And a large crowd turned out Dec. 5 in the Madison County High School cafeteria to hear from a citizens group that is studying the issue.

The high school cafeteria was nearly full last Thursday night as the Madison County Clean Power Coalition held its first meeting to acquaint the public with the mission of the coalition as well as to hear from three local scientists on the dangers of the chemicals contained in creosote and what it could mean for the environment, air and water quality in the county.

“We are not a radical group against the plant,” coalition member Drago Tesanovich told the crowd. “It isn’t our goal to see the plant dismantled or to stand in the way of the county’s economic progress.”

On the other hand, Tesanovich said they believe the county was “sold a bill of goods.”

“It’s up to us to speak out and demand what we were promised,” he said.

The American Lung Association issued a lengthy statement opposing the use of biomass combustion by GRP for electricity production in Madison and Franklin counties.

“Burning biomass can emit recognized air pollutants, including particulate matter (soot) and other carcinogens, which cause premature deaths and endanger respiratory health,” the statement read in part. “Because of the multiple, ongoing risks to human health, the Lung Association urges (GRP) to consider clean, renewable options to fuel its Madison and Franklin County plants, instead of biomass.”

The statement went on to say that biomass is far from “clean” and that burning it creates air pollutions that “cause a sweeping array of health harms, from asthma attacks to cancer to heart attacks, cardiovascular disease and even death.”

It noted that particulate matter can also cause lung cancer.

“Railroad ties, like other wood products, can contain other chemicals from its years that may be highly toxic, including particulate matter and other carcinogens,” the statement read. “Particulate matter is a recognized carcinogen as well as a cause of premature deaths.”

Three experts on the possible health and quality-of-life impact of the plant spoke at the meeting giving detailed overviews in their areas of expertise. All three are also Madison County residents.

Wendy Meehan, who holds a Masters of Public Health degree, spoke on what the community was promised and how community members feel that promise has been broken by bringing in creosote railroad ties as a fuel source.

Meehan said the group toured the plant earlier in the week and found it to be a nice structure. She also noted that it had promised to provide a clean energy source as well as a huge benefit to the county’s tax base. Meehan said railroad ties as a fuel source were not a part of what the county was promised.

The pros of the crossties, she noted, was that they are abundant and easy to obtain, but the cons are many. She described how rain falling on the large mounds of ties that are stored outside around the plant runs off into a swampy area behind the plant near the tracks and that oily slicks have already been seen in nearby streams. She said some states require specific protections to prevent runoff like this but that there are no protections like this at the GRP site. She showed pictures of heavy black smoke at startup and overnight steam emissions that bring disruptive noise to homes in the area. In addition, she pointed out that workers at the plant are not provided with personal protective equipment such as facemasks, ear muffs and covers to protect personal clothing.

Meehan said the Coalition demands that the plant stop using railroad ties as a fuel source at least until on-site protections to prevent seepage into ground water are implemented and to provide the appropriate protective equipment to their workers to help protect them from the noise, dust and exposure to carcinogens.

David Vogel, who holds a doctorate in biophysics, described the volatile organic compounds (VOCs) found in the emissions from burning crossties and how difficult it is to adequately measure the amount that escapes into the air.

He said GRP officials maintain that biomass, including the railroad ties, are burned so hot that VOCs are destroyed; that they are constantly monitoring their equipment and that the EPA are the definitive experts on the matter.

“I think that by the end of the presentation tonight that we will be arguing about the data but not about who the experts are,” Vogel said, adding that the EPA’s data was “sparse and of poor quality.”

He described how the EPA’s own study on VOCs used 57 plants across the country for their data and that out of those, only four burned creosote.

“The idea that the EPA is the source of all knowledge is less true today (due to political influences),” Vogel said, and pointed out that from 2008 to 2016 the EPA said “no” to creosote railroad ties as a fuel source before saying “yes” in 2016. He said the European Union’s Environmental Protection Agency still does not allow their use.

Dave Ramsey, who holds a master’s degree in public health and formerly worked in the CDC’s chronic disease division, talked about the potential hazards from biomass plants as described by the Lung Association and many other health organizations. He also gave a brief history of railroad ties, saying that creosote was first used to preserve railroad ties in 1900 as an effective preservative against weather, insects, plants, etc.

Ramsey also talked about the United States’1,600 “superfund sites” describing them as the most toxic places in the country and said that at least 46 of these are related to poisoning from creosote.

Ramsey said he wasn’t comparing these sites to what is happening in the county with GRP, but noted that a lot of people who once lived in those areas “were promised the same things we have been promised.” He also noted that most of these other sites were also located in rural and poorer areas of the country and he felt that was planned by the original companies as there was less resistance, especially when job and tax benefits were offered as incentives.

He went on to describe how toxins from creosote and other VOCs get into the air we breathe, surfaces we touch and the food we consume.

Ramsey said that he doesn’t feel that GRP has given them a good answer on why they are burning railroad ties, especially when plant officials have told them they have enough biomass to burn without using those ties.

“The only thing I hear is ‘it’s permitted,’” Ramsey said. “Well there are a lot of things you are permitted to do but that doesn’t mean you should….I’d still like to get a direct answer from GRP.”

He said the EPA issued a directive in 1988 that prohibited burning railroad ties and did so again in 2008, before it was allowed in 2016. “What has changed?” Ramsey asked. “The only thing that’s changed is the definition…and that’s the effect of powerful lobbying groups.”

Coalition member Gina Ward gave a call to action at the conclusion of the meeting, saying plainly that she simply wants the plant to “quit burning railroad ties.” She received a loud round of applause.

The group placed petitions urging the plant to stop burning the ties at the front entrance of the room and gave out others for attendees to take to their friends and neighbors to sign. Ward also urged those present to sign up for the Coalition’s emails and texts for updates and most importantly, to take a list of provided local commissioners’ and state lawmakers’ phone numbers and contact information. She encouraged everyone concerned about the plant to “reach out to those who are making your decisions (for you).”

Ward also encouraged everyone to work to have a conversation rather than an argument about their differences on the plant’s decisions.

“Be nice, we have to work together,” she said.

Tesanovich said like every business, the plant was built to make a profit and that it is up to citizens to hold them accountable in protecting the health and well-being of their neighbors.

Tesanovich also recognized Conolus Scott Jr., a member of the county planning commission, for his letter to the editor in the Nov. 15 issue of The Journal, urging county leaders to stand up for their citizens’ health and safety on this issue and hold GRP accountable.

The meeting was slated to have a 30-minute question and answer session and though numerous written questions from the audience were collected, there was not enough time to present them following the presentations. Coalition members promised to get the questions to the appropriate people for answers and to follow up on them.

The Clean Power Coalition will meet the third Thursday of each month from 7 to 8 p.m. at the Madison County Library. The groups next three meetings are: Dec. 19, Jan. 16 and Feb. 20.

For more information on The Madison County Clean Power Coalition (MadCoCPC), go to madisoncleanpowercoaltion.com or email them at madcocpc@gmail.com. You can also find them on Facebook.