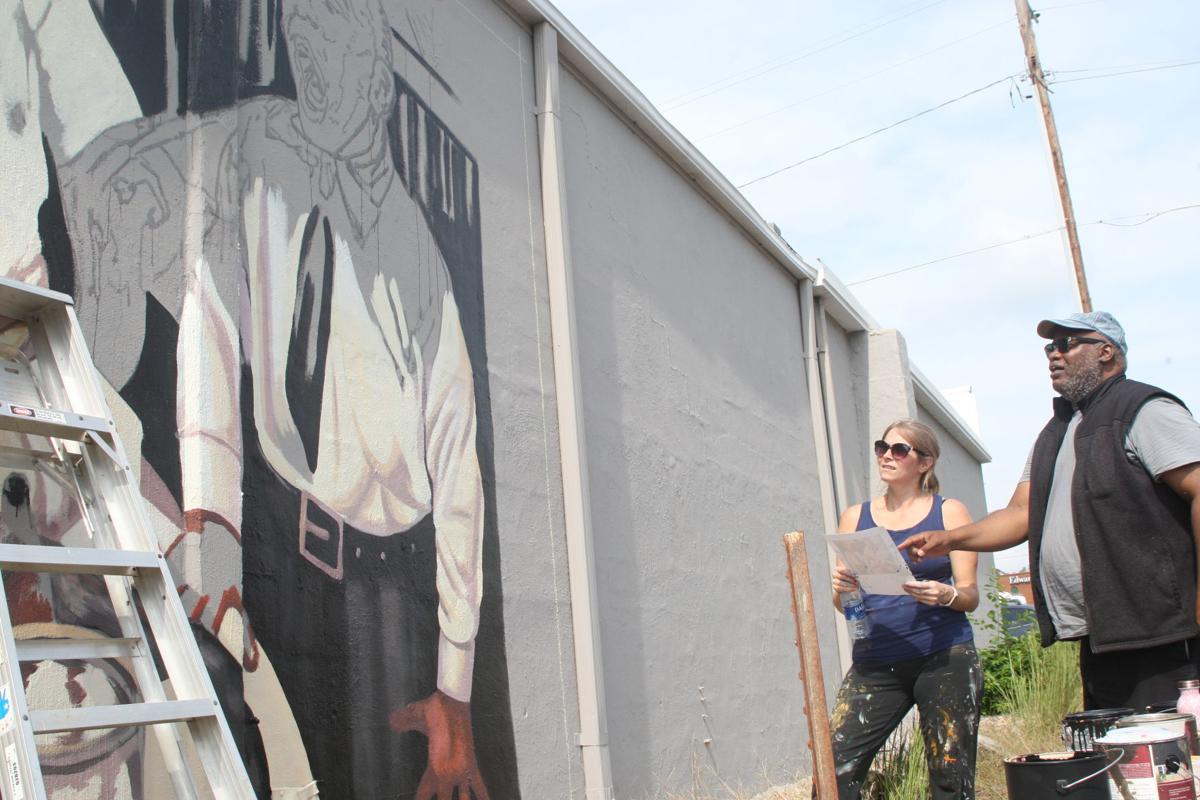 Professor Joseph Norman and Color-the-World-Bright feature artist Meredith Lachin look at Lachin's progress on a mural on the side of the Medlink building in Danielsville Saturday. 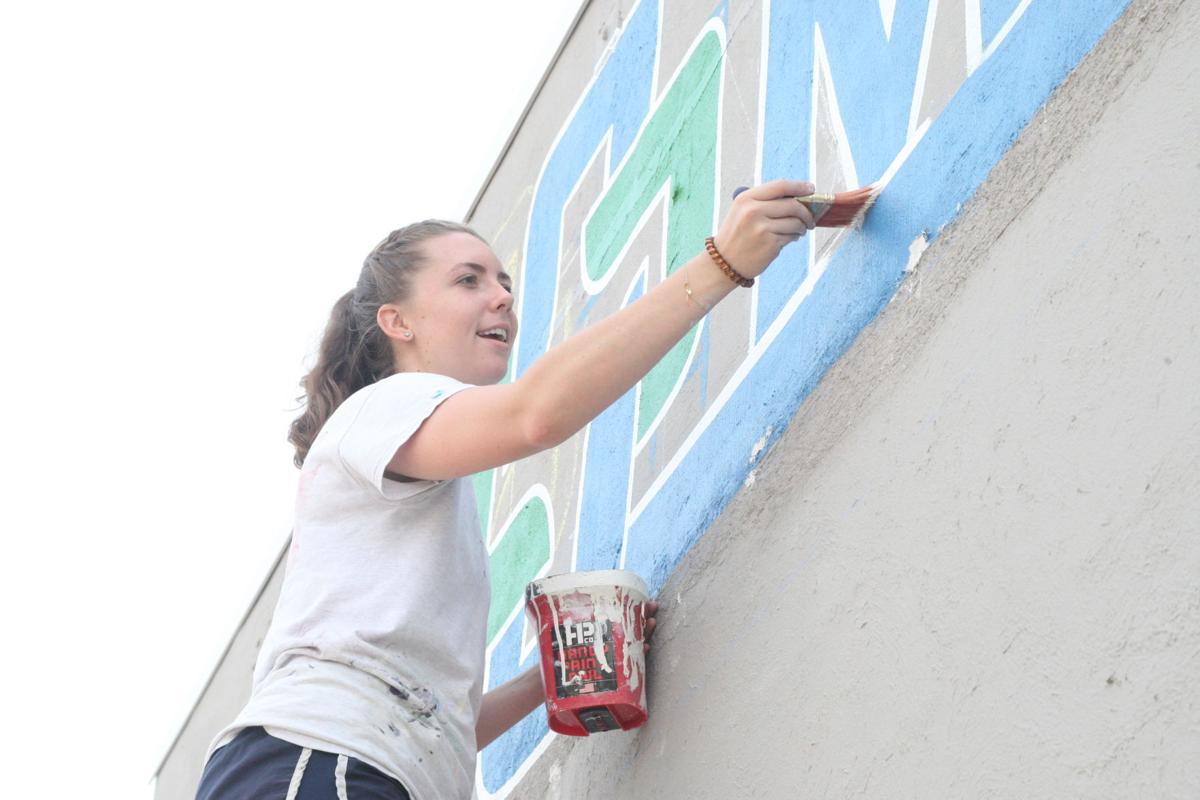 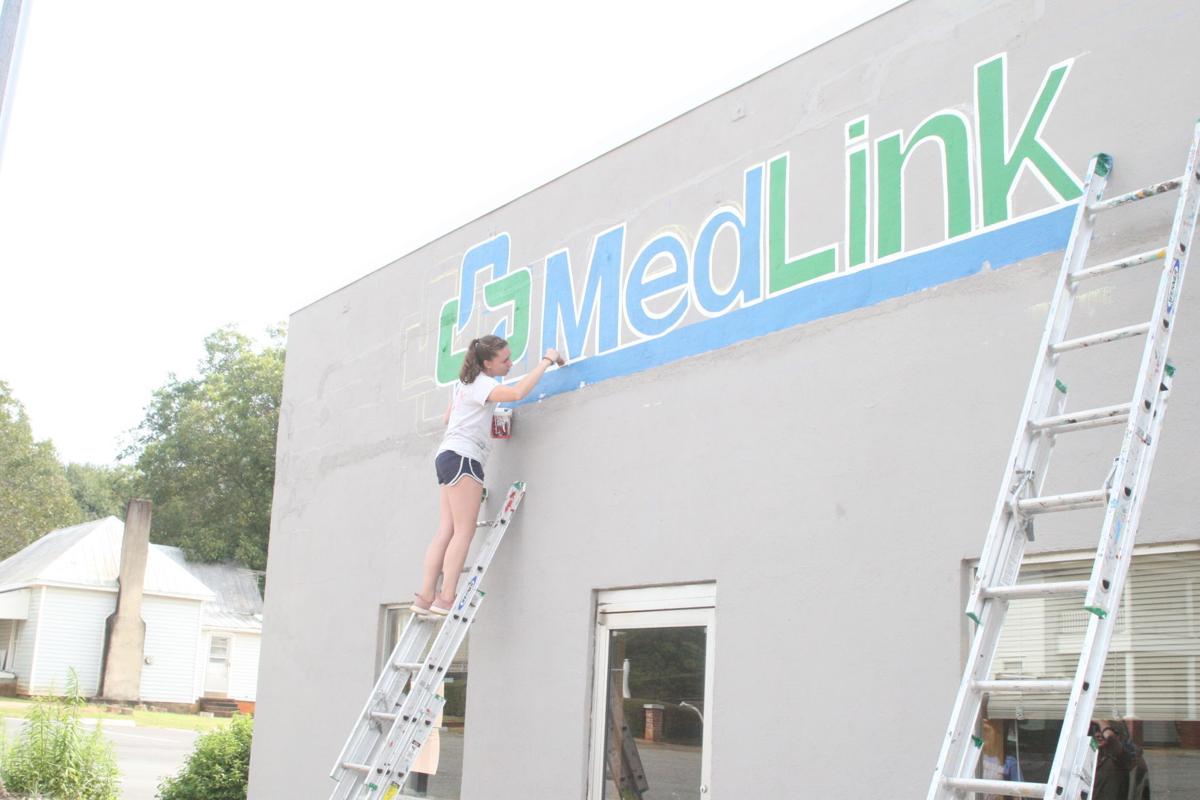 Professor Joseph Norman and Color-the-World-Bright feature artist Meredith Lachin look at Lachin's progress on a mural on the side of the Medlink building in Danielsville Saturday.

Professor Jospeh Norman toked on a cigar, laughing and talking with enthusiasm while watching paint applied to the mural on the new Medlink clinic that will open after the new year on the courthouse square in Danielsville.

The renowned University of Georgia artist and educator, whose work is housed in major museums, such as the Smithsonian Museum of American Art, took a moment from talking murals to place his sandwich and orange soda order Saturday with a member of his art team, which is tasked with giving the one-time general store owned by RH Daniel a facelift.

He then turned his attention back to the work of the project’s feature artist, Meredith Lachin, who held a brush and a picture as she worked on a ladder balanced on rocks next to the building.

“This is a homage to Norman Rockwell to promote good medicine practices, with children being attended by physicians and nurses,” said Norman, noting that the imagery shows diversity, which wasn’t evident in the old Saturday Evening Post’s Norman Rockwell art.

Medlink, which has a clinic in Colbert, plans to open the Danielsville facility in the former Department of Family and Children Services (DFCS) office in early January.

Christine Blomberg, Director of Marketing and Outreach for Medlink Georgia, said the mural team, which includes students from the Lamar Dodd School of Art — but isn’t funded by the university — was commissioned to bring history and color to the clinic’s new facility.

“When we purchased the building, we felt it was important to honor the history of Danielsville by preserving the historical look of the general store,” said Blomberg. “MedLink board member and Danielsville business owner, Al Stone, helped us come up with the concept for our new murals. We have partnered with UGA's Color the World Bright to complete the project.”

The new clinic, which will have about 15 employees and offer general family dentistry, pediatrics and behavioral health services, has RH Daniel’s name painted on the front of the building, as well as Medlink. Coca Cola is on the side of the building facing Hwy. 29, with three murals on the other side, including one of Crawford W. Long, the famed surgeon and pharmacist from Danielsville best known for his first use of inhaled sulfuric ether as an anesthetic

“We met with the CEO of Medlink and talked at length about what was possible and so we’re restoring a Coca Cola sign on the side and doing some recreations of things that were here in the 1930s and 40s,” said Norman.

The heavy rains have altered plans for a three-day job, but Norman and his Color-the-World-Bright crew from UGA typically get projects done in about three days. The mural team has work lined up for quite some time and doesn’t have to solicit for projects.

The professor said the mural club originated around 14 years ago after a student wanted to go on a study abroad trip and needed to raise funds.

“I said, do a bake sale, wash cars, maybe do a mural,” he said. “And they said, ‘OK.’ And they came back and somebody offered them a mural and I laid it out for them and said this is how you should go about doing it and they did it and made some money. It happened again. And then I said, ‘Gosh, I’m having to spend so much time teaching them how to do this, I might as well organize this thing.’ So that’s when we started getting really organized.”

The club has a pecking order, with the most experienced and qualified getting the most challenging work. The artists have to prove themselves over time. Seven artists are working on the Danielsville project, including Norman, Lachin, Eidson, Alondra Arevalo, Gabriella Poteet, Mary Sanders and Catie Cook.

Norman said it’s “an all hands on deck kind of thing.”

“All contribute in some way,” he said.

More about the group can be found at https://colortheworldbrigh.wixsite.com/mysite/articles-and-recognition

Very cool! Can't wait to see it completed. Danielsville could use some color and vitality.