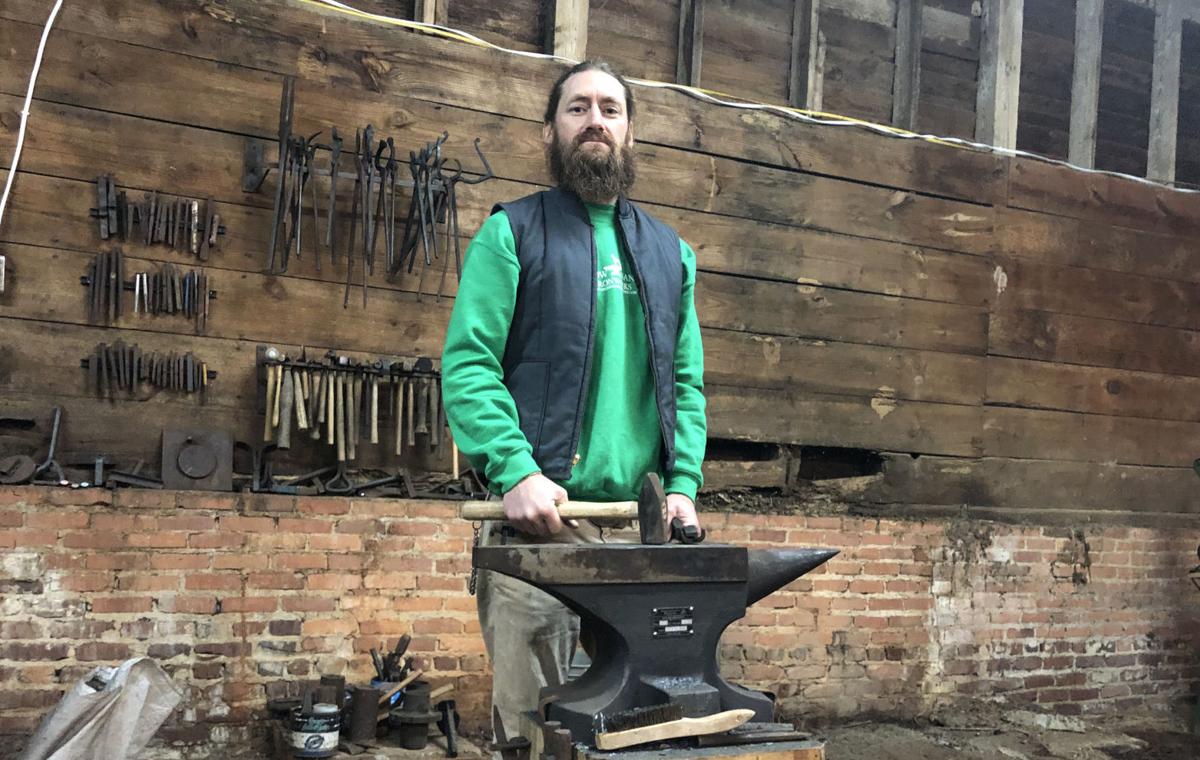 Blacksmith Patrick Blount is pictured at his anvil at Greenhow Handmade Ironworks at 1939 Madison Street in Comer. 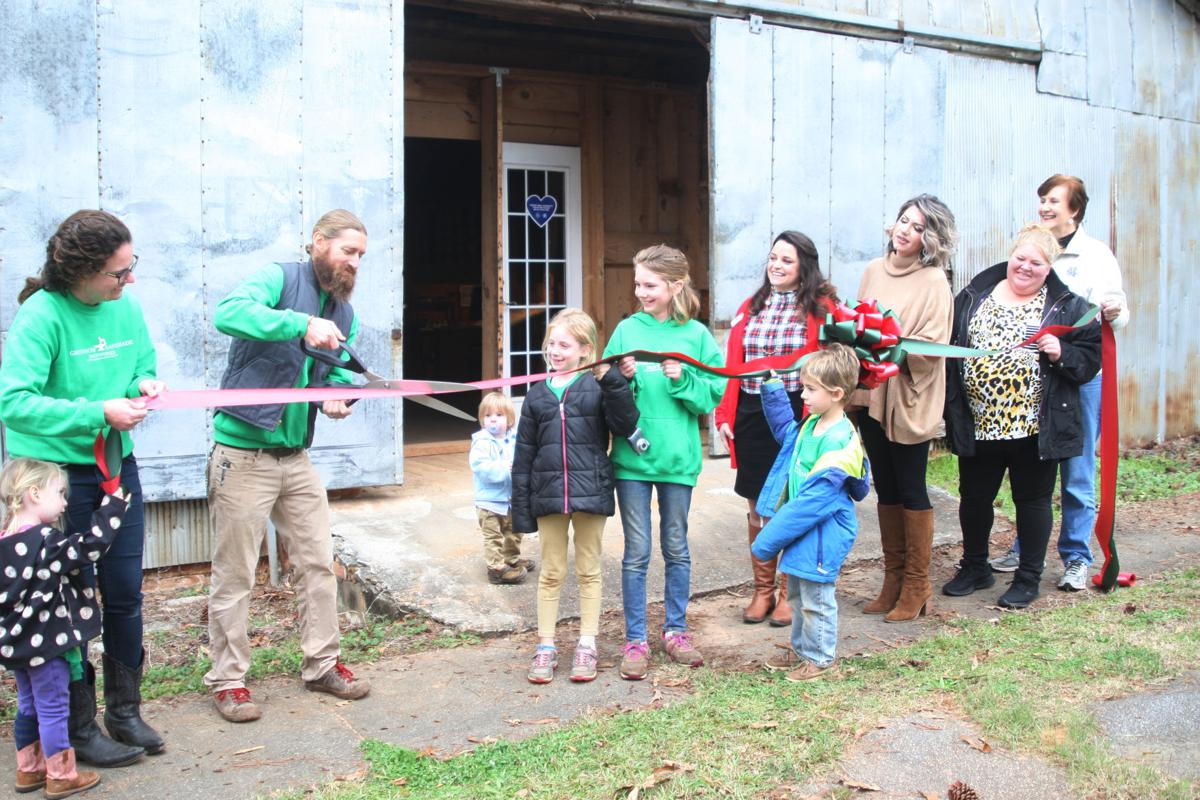 Blacksmith Patrick Blount is pictured at his anvil at Greenhow Handmade Ironworks at 1939 Madison Street in Comer.

The first time Patrick Blount walked into the old metal building on Madison Street in Comer that is now his business, Greenhow Handmade Ironworks, the blacksmith had a thought: “Man, this place is a mess.”

But then there was a second thought: “I can feel the spirit.”

The place had character to it. And Blount ripped up the rotting floor and started working on a dream, a blacksmithing retail store and school, where he can sell his work and also pass knowledge on to others interested in blacksmithing.

Blount, who went to farrier school to learn to shoe horses, stood in front of his business Friday morning telling a crowd about his plans. He then held ceremonial oversized scissors and cut a red ribbon as his wife, five children and Madison County Chamber of Commerce leaders stood next to him.

“This building I’m told was the original horse stables for the carriage horses for the City of Comer,” he said. “That really struck me, because I could imagine the farriers running around there shoeing those horses.”

Blount said his new shop is a product of COVID-19. He operated a blacksmithing shop from his home in Oglethorpe County, but then COVID-19 hit, and everything changed.

“My business had been working out of my home shop and doing a lot of art shows and festivals,” said Blount. “Obviously, this year there were no shows and that killed me. My whole year was booked and then the first week of March my whole year got ‘unbooked.’ And I was like, ‘What in the world am I going to do?’ And that’s why this (the Comer business) is here.”

Greenhow Handmade Ironworks is housed in a big structure, much bigger than Blount’s home shop.

“I made the decision that I needed to move out of my home shop, and I know it was a kind of crazy time and people have said, ‘When everything was sinking, why in the world did you decide to go bigger?’” said Blount. “And I was like that’s exactly what I needed to do. I needed to go bigger at that time.”

The blacksmith said he started to look for a place to grow his business, including Athens and Watkinsville. But he said he was drawn to Comer. There are other artists and craftsmen in the town. He said the place has a good feel.

“I’ve known about Comer for at least 20 years now,” he said. “I used to have a good buddy who lived over here. And I knew there were some other crafts people over here.”

Comer City Manager Rocky Miller showed Blount the building at 1939 Madison Street in Comer across from the Comer Farmers Market, and the former freelance photographer of 13 years worked through September and October to prepare the place for business, which he opened in November.

He spoke of what is offered at his ribbon-cutting ceremony Friday.

“I do custom ironwork, decorative ironwork,” he said. “Pretty much anything made out of metal, I can fix or make. That’s small as a set of towel racks for your bathroom or if you need a driveway gate. We can design it in-house and build it right here in-house.”

Blount said there will be plenty of hardware for sale at his store.

“If you need a gate pull, something like that, you can come in and grab one, pay about the same amount you’d pay for something squeezed out in China at Lowe’s and get something handmade right here in Comer, Georgia,” he said.

Blount has been a blacksmith for about 10 years. He got into the trade after going to farrier school. He is a certified farrier with the Brotherhood of Working Farriers Association (BWFA).

He is also a graduate of the Virginia Institute of Blacksmithing where he studied under Master Smith Dale Morse. Bount is the only certified artist blacksmith in Georgia. And he hopes to get a certification process in Georgia going at his business. Teaching the art of ironwork is a real passion. Blount aims to open a school at his building in February or March.

“We’re going to set up at least five, and I think I have room for six forging stations for students to come in,” he said. “We’ll probably just start out doing one-day classes where students can come in and get a taste of blacksmithing and learn the processes and learn how things work and give them all those basic steps they can build on and then do skill building on top of that. Then as we grow, hopefully I can expand into more in-depth classes.”

Blount said he wants to offer some family instruction.

“I’d be willing to take students as young as 12,” he said. “I’ve got some ideas to do some daddy-daughter classes and daddy-son classes and stuff like that, some family-oriented classes. And then the forge stations during the week will be open for rent. So if you take a class and you want to come in and work on skills or your own stuff, you can come in and rent a forge out by the hour for however long you want it.”

“It's the only one of its kind in the state and it’s right here in our community, and we could not be more excited to have him here with us,” said Strickland at the ribbon cutting.

Greenhow Handmade Ironworks T-shirts are available to purchase online and the money will be used to purchase equipment for educational forge stations.