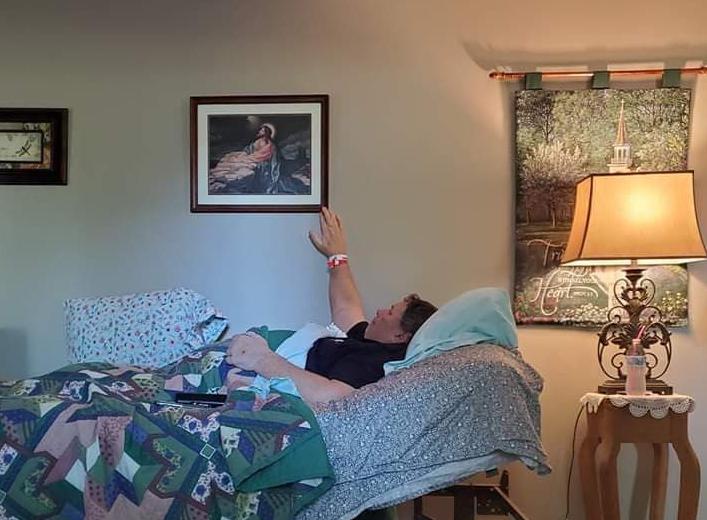 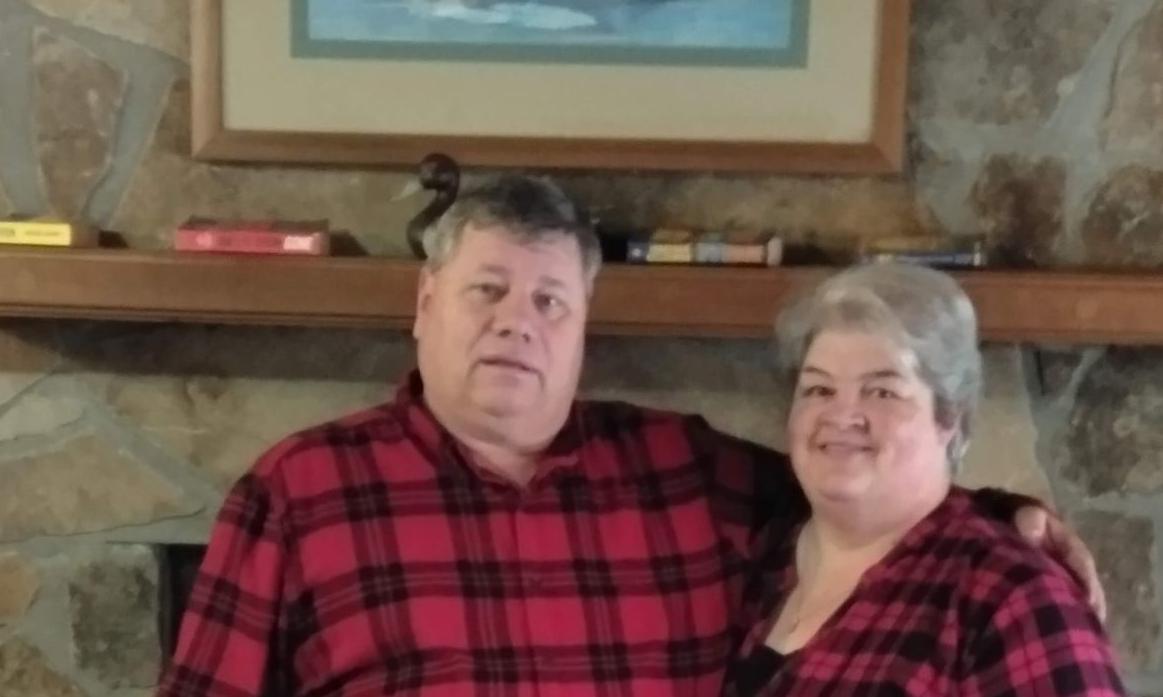 A few weeks ago, Robert Burt was near death. That’s how one doctor in Atlanta viewed it.

The physician phoned Burt’s wife, Joy, and discussed end-of-life plans in her husband's battle with coronavirus, which had put him in the hospital and on life support. Burt had already met multiple mortality factors.

During this grim conversation, Joy sought to interject some hope.

Indeed, Burt, a 54-year-old pastor at Danielsville Baptist Church, has been healed.

After a 23-day hospital stay, Burt returned home April 10, having survived a life-threatening experience with the highly-infectious disease that has killed over 170,000 people world-wide since Jan. 11.

Burt said he’s “doing pretty good” but is still very weak from an intense, near month-long battle with the illness. Burt, who undergoes two physical therapy sessions per week to improve his strength, is taking his recovery one day at a time and counting his blessings.

“Without my faith and without the trust in the lord, Jesus Christ, I never would have made it,” said Burt, who has pastored Danielsvile Baptist Church for seven years.

His hospitalization took him from Piedmont Athens Regional to Piedmont Atlanta for specialized extracorporeal membrane oxygenation (ECMO) treatment, which turned around his condition.

For much of his 23-day hospital stay, Burt said, “I didn’t know where I was.”

“I didn’t remember nothing; I didn’t know nobody; didn’t hear anything,” Burt said. “And I guess that was a pretty good thing.”

Burt said he “came to” while in Atlanta.

Burt, who was the first confirmed COVID-19 case in Madison County, is unsure how he contracted coronavirus, which has now infected over 800,000 people in the U.S. and over 2.5 million world-wide.

Burt’s bout with coronavirus began with some of the common symptoms associated with the potentially deadly illness.

He reported “feeling terrible” around the middle of the week of March 16, experiencing a weakness with coughing and headaches. Those symptoms prompted a visit to the doctor on March 18, when he was diagnosed with pneumonia.

“I have battled pneumonia three or four times,” Burt explained. “This time, I just thought it wasn’t nothing but another round of pneumonia.”

When his condition didn’t improve by the night of March 19, his daughter took him to the emergency room at Piedmont Athens Regional Medical Center.

Burt was diagnosed with coronavirus on March 22 and was placed on a ventilator. Joy recalled those lonely moments with her husband’s life in danger. This news came about a year after she’d lost her 28-year-old son to an automobile accident. Now her husband faced a critical fight.

“I don’t want to say I was in hysteria alone, but I was here by myself and it was horrible thinking that he does have it now, what do I do?,” Joy said.

Joy then tested positive for coronavirus on March 30, adding even more worry.

“I was heartbroken,” she said. “My husband was on life support, and I was wondering how and when it was going to affect me, and I was worried about my family.”

Joy, however, said she only felt sick for a day, though it was an intense day of sickness, which included a fever.

“I got really sick, and that was scary, horrible,” said Joy, who has been symptom-free for over three weeks, “sitting around and waiting for symptoms to happen and being alone at the same time.”

Meanwhile, Burt was in a prone bed in Athens and not improving. That’s when doctors decided to send him to Piedmont Atlanta on March 27 for treatment on an ECMO machine.

According to a definition found on the University of California-San Francisco Health website, the ECMO machine “pumps and oxygenates a patient's blood outside the body, allowing the heart and lungs to rest.” When a person is connected to an ECMO machine, “blood flows through tubing to an artificial lung in the machine that adds oxygen and takes out carbon dioxide; then the blood is warmed to body temperature and pumped back into your body.”

“What that was is draining the blood from my body and trying to get the new oxygen into my blood,” said Burt, who added that ECMO treatment lasted about a week.

It was while in Atlanta that Burt turned the corner in his coronavirus battle. Burt said when he was positioned facing upward during ECMO treatment “everything went bad,” but whenever rotated to faced downward, the results improved.

“They said after a while everything finally started clearing up,” Burt said.

Prior to awaking, Burt pulled out his ventilation tubes, which forced hospital staff to place heavy mitts on his hands.

He was told by the medical staff that they’d “never seen anybody fight as hard for their life,’” Burt said.

Burt "came to" during the first few days of April, trying to make sense of things.

“It was just like a new world to me … I’m thinking where in the world have I been and how long have I been out?” Burt said.

As he came to realize his situation while in the hospital, Burt said, “my emotions went wild with me.” His wife had already tested positive for coronavirus, but his daughter nor anyone else at his church had tested positive.

“That made me feel good,” Burt said.

Still, going so long without remembering anything from his hospital stay was unsettling.

“The emotions of me being in the hospital, of losing about two and a half, three weeks of my life and not remembering anything, that’s just something that’s just not supposed to happen,” Burt said.

Burt, who returned to Piedmont Athens Regional from Atlanta on April 5, still faced a hurdle in returning home. He was described as “as weak as a newborn kitten,” so he began physical therapy on April 7. He was told “you have got to fight” if he wanted to be discharged from the hospital. And so he did.

“I fought like the dickens with physical therapy,” Burt said.

Within four days, Burt could walk 36 feet and back to his hospital bed. He was told he could go home.

Burt returned to his home just before Easter to find a yard filled with balloons and a sign that read, “Welcome home, pastor Burt." One of his parishioners had even placed a seven-foot cross in his yard.

“(Coming home) was a very touching moment knowing I hadn’t seen my wife in almost 30 days and my family in almost 30 days, hadn’t talked to nobody, and realizing all the prayers that had been lifted up,” Burt said. “ … It was a time of knowing that there are people out there that still care.”

Burt has been given no timetable for his physical recovery, given the toll coronavirus took on his body. He’s able to move his legs and a walk down the hallway at his home, but going weeks without using his limbs “did a lot of damage,” he said.

There’s also no time frame for his return to the pulpit at Danielsville Baptist Church, as the church doesn’t want him to push his recovery.

Burt’s advice as a COVID-19 survivor is for the people to give this virus the full attention and caution it merits. He encourages the public to follow news updates about COVID-19, listen to the medical experts and the president and follow all preventative measures to battle coronavirus’s spread.

He also said his “heart and my prayers” go out to the victims of the virus and their families.

“I know there are people who are passing away from this virus who are not as sick as I was, and that’s a crying shame and my heart goes out to them,” he said.

Burt said his outlook on life as a result of this experience has changed as he moves forth. He said he’s “not taking my life for granted anymore.”

“Because you never know with just a small virus like this how bad it really can jump on you and what it can do to you,” he said.

Meanwhile, Joy said the experience has strengthened the bond between the couple, which just celebrated their 17th wedding anniversary. She remembered the year they had gone through with the loss of her son.

“We had so much grief and sorrow that we were dealing with,” she said. “But then to come this close to losing him after a year of turmoil and hardship and now one year later, almost losing him, it really brought us closer together and made me appreciate our marriage more.”

With Robert now back at home with her, Joy reflected on her phone conversation with the doctor in Atlanta when the news about her husband was so dire.

“He was so close to death, just unbelievably close to death,” she said. “But I refused to believe that because I know my God is the ultimate healer and that he was going to heal Robert.”

A Go Fund Me page was set up for Burt during his hospitalization to help cover his medical costs. According to the page, Burt does not have medical insurance. Those wishing to assist Burt can make donations through that webpage at https://www.gofundme.com/f/pastor-robert-burt-covid19-relief-fund.

Joy Burt also reported that her purse was recently stolen from her truck while parked at Danielsville Baptist. She said it is a kavu rainbow colored bag. She asked that it be returned.