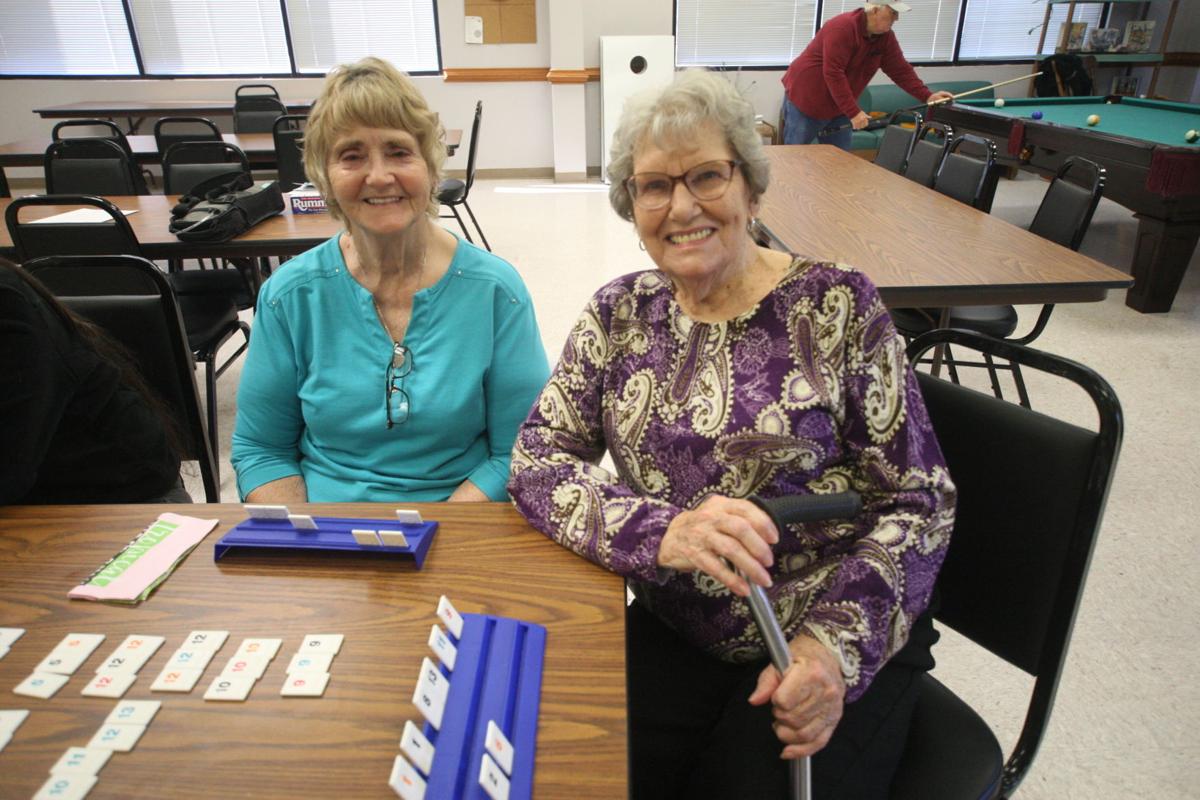 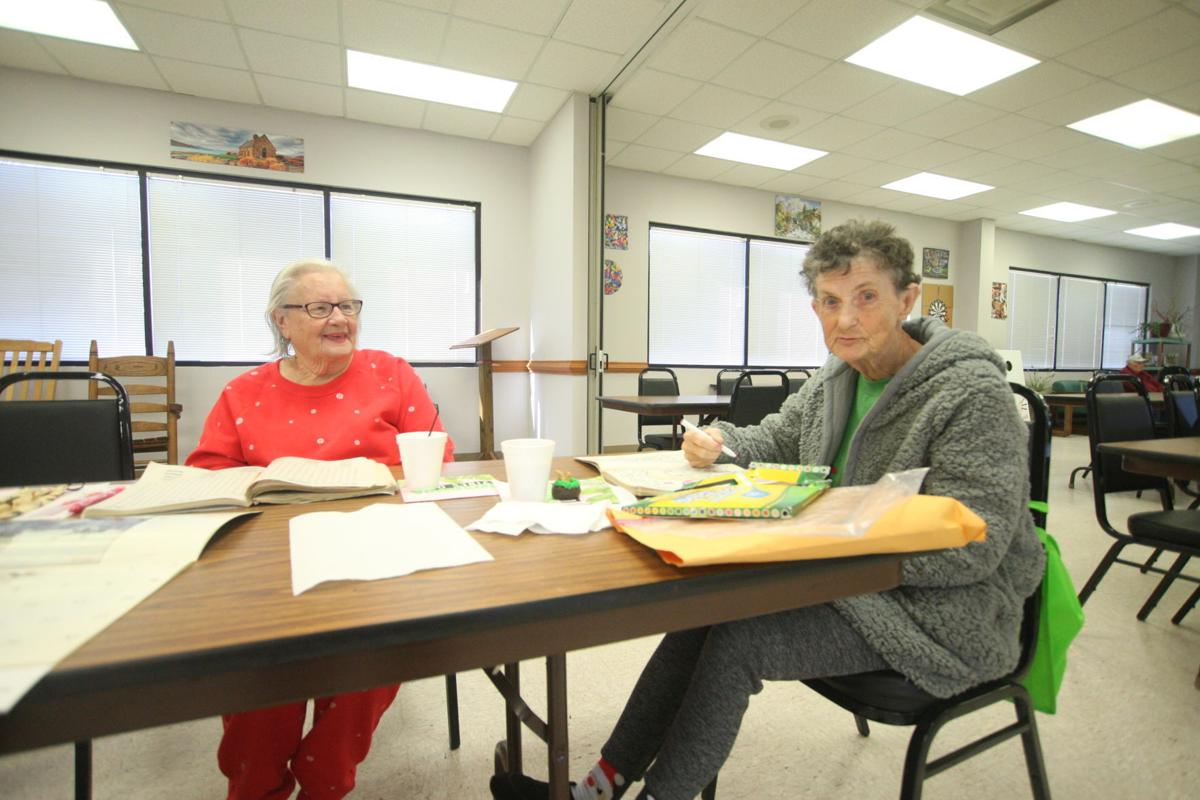 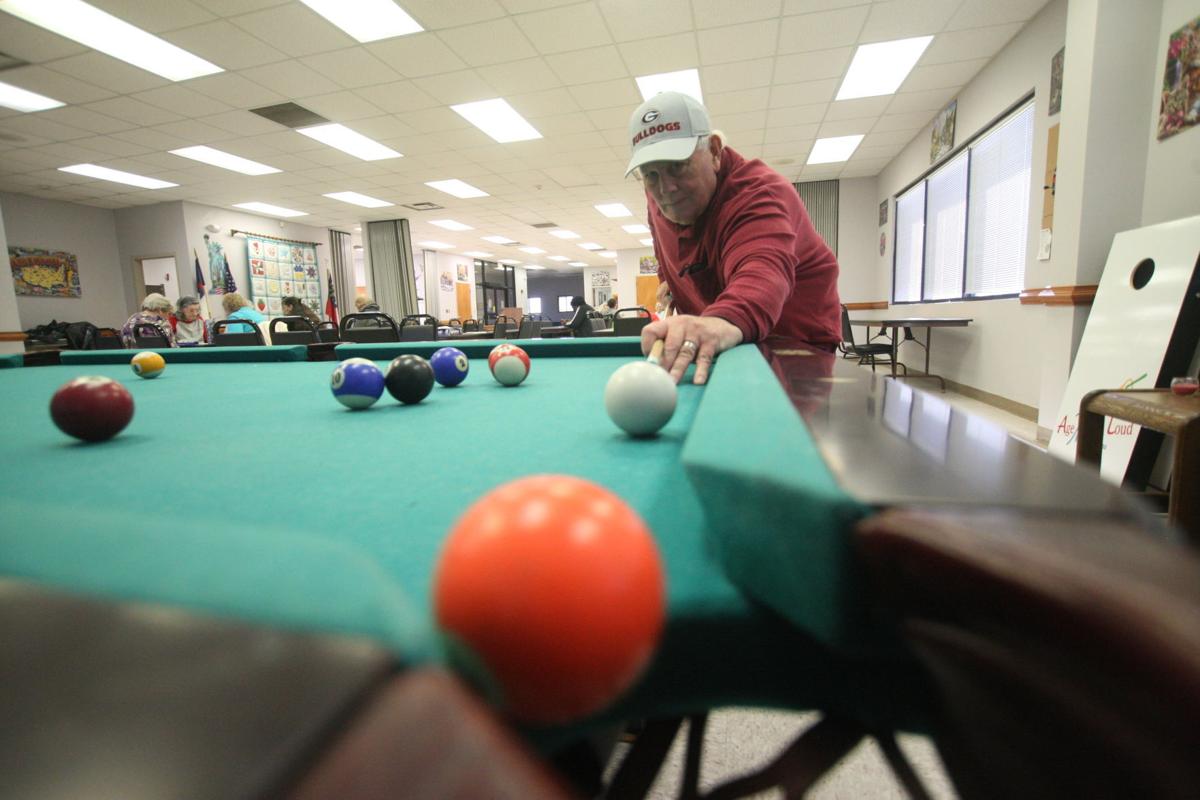 Edward Dove makes a shot on the pool table at the Madison County Senior Center, which reopened Tuesday after being shut down since Dec. 18.

Edward Dove makes a shot on the pool table at the Madison County Senior Center, which reopened Tuesday after being shut down since Dec. 18.

Marian Bryson says she’s now officially the “motor mouth.” She laughed, saying her friend, Linda Thumm, used to have the prestigious title, but now it belongs to her.

“I’m the motor mouth,” the outgoing senior center member said, with Thumm laughing and agreeing that she had relinquished the title.

It was Tuesday, Feb. 2, Groundhog Day and Jennifer Lastinger, assistant director of the senior center, had brought in chocolate donuts with green icing as “grass” with a Teddy Graham, or “groundhog,” in the center of the treats. Bryson and Thumm sat with fellow senior center members at a table playing Rummikub, a tile-based game with elements of the card game, rummy.

Bryson said the game helps keep them sharp. But she said it’s the camaraderie that brings her and others to the senior center, which was shut down from Dec. 18 to Feb. 1 due to the most-recent COVID-19 surge. The center reopened on Tuesday, Groundhog Day, when Punxsutawney Phil predicted six more weeks of winter for a coronavirus-fatigued nation.

The senior center crew was happy to see each other.

“We all have a very good time,” said Bryson. “We are like a family. We call each other on the phone and are friends, not just here at the center.”

Nearby Edward Dove honed his pool skills at the center’s pool table.

“Me and my wife come to have something to do, to stay active and to meet people and see how they’re doing and if we can give them some help,” he said, adding that he used to play pool, then got married and took a 55-year layoff before picking it back up at the senior center.

Joyce Mattox sat at a table by herself wearing a mask and working on a crossword puzzle. She had driven Tuesday to the center, her first visit since the pandemic began. Mattox said at home in Comer she passes time playing games on her phone and watching soap operas like “Young and the Restless” and “Days of Our Lives.” She chuckles when asked what’s happening with the characters on those shows.

“I can’t tell you that now,” she laughed.

The company of fictional characters can be fun, but it doesn’t replace real people. And Mattox has missed time at the center.

“I used to come here every day for years,” said the former cook and caterer at Strickland’s in Athens. “It’s something to do; you’re around people, activities.”

Senior center director Kesley Tyner said this past pandemic year has been hard on everyone, but especially many senior citizens, who are at the highest risk of serious illness, but who are also terribly isolated. She said caring for older citizens is a matter of addressing physical safety, but also mental well being.

“The purpose of the senior center is social activity, to have physical activities, good nutritious lunches, and also shared experiences with people who are like you and have been through the same things as you in life,” said Tyner. “That’s imperative as we get older and we fall into the trap of loneliness or those routines of not really having a need to get up and go somewhere. That’s when we start to see some mental decline.”

Tyner said her clients’ mental health is why she chose to re-open the center in July after the spring shutdown. She said Madison County is one of only two senior centers in the 12-county northeast Georgia region to open at all since the pandemic began here in March.

“We saw such a mental health need,” said Tyner. “We had people coming through to pick up their food boxes in tears. They could not continue to function being shut in at home and alone. After about three weeks of that, I said to Jennifer (Lastinger), we’re going to have to do something.”

Tyner decided to open in July to give seniors a respite from the hard days alone. The center had about 40 daily members prior to the pandemic and about a dozen when the center re-opened in July, with that number rising to 15-to-25 in December. No more than 30 will be allowed at a time, Tyner said.

“So we decided to open up for very short hours just a couple of days a week starting in July,” she said. “And that’s what we maintained until December, three to four days a week for a couple of hours each day, just long enough to come in, use the gym if they wanted to, get food to take home or eat a meal here and visit for just a little while in a safe space where you know it’s being cleaned and staff is being careful.”

Jones HVAC recently installed “Phenomenal Aire Cold Plasma Generators” at the senior center to filter the air in the facility. The generators are described as creating “an electric field filled with highly charged ions. This electrified field is known as a plasma field. The ions created within the field act as a natural scrubbing agent for the air passing through the field.”

“It’s like a sanitizing system; this is always filtering,” said Tyner. “That’s a huge security mechanism for us. We have scarred our lungs I’m sure with the amount of Lysol and bleach we use in here. We want to be so careful.”

Tyner said the staff, which also includes Alesha Blalock, administrative assistant, and Annie Johns, kitchen manager, has worked hard to care for the seniors, even when they aren’t at the center.

Lastinger described the work over the past year.

“Initially, it was, do you have toilet paper, do you have groceries?” she said. “Well come through here, we’ll give you some. And then it became, let me call you, because now it’s been four weeks since we saw you. Are you OK? And so we were calling people. And then it transitioned into, OK, we can bring you back here, how do we find something safe for you to do. Are you happy and mentally and physically taken care of?”

Of course, one of the primary functions of the center is the “Meals on Wheels” program, which provides a hot, healthy meal from Trio Foods in Cornelia Monday through Friday to seniors and disabled residents five days a week. Meals on Wheels staff members include Steve Moss, Wayne Green and newly hired Kevin King.

“They (Trio Foods) prepare everything in the their kitchen in Cornelia, and then they bring everything to us, hot and fresh every morning,” said Tyner, who noted that Jackson EMC recently awarded a $15,000 grant that helped the program purchase a new Ford Escape for meal deliveries. “We package everything up here. We have great thermal delivery bags and coolers for cold things. Then we have our staff take it out, four meal routes a day. We have phenomenal volunteers.”

The Meals on Wheels program, which receives state, federal and local funding, is designed to help senior citizens remain independent in their later years.

“The Meals on Wheels program helps people stay in their home for longer, because you have someone checking on them, someone bringing you meals,” said Tyner. “It helps you age in place. We don’t want you to have to go into a home or somewhere where you lose your independence.”

Tyner said that staff are being responsible with meal deliveries in maintaining social distance and wearing masks. Staff members also wear masks at the senior center around clients. Tyner said seniors aren’t required to wear masks at all times, but they must have one and they are expected to wear one when moving from one place to another or in close proximity to one another. Tyner said the center has been fortunate in not having outbreaks. She noted that several members had covid after the center closed in mid December, with two facing hospitalization, but all recovering.

Lastinger said the center serves as an education resource for seniors. For instance, a representative from MedLink will be at the center this week to talk with senior center members about covid vaccinations and answer any questions they might have in making a decision.

“And if they want it we’ll set up a time to set up in here and administer it just like our flu shots, if that’s what our people want,” said Tyner, adding that the center isn’t going to steer the clients one way or another, but will help them get information.

Both Tyner and Lastinger said they have been moved by stories from their clients this past year.

Lastinger said one senior center member lost her husband last year, but the center has been a place of warmth and company for her in a hard time.

Tyner and Lastinger also said they have been really struck by how many people have stepped up to help with donations, volunteer time and simple kindness during the pandemic year.

“During all this, we have just had so much love and support from our existing volunteers, new people who have more time at home who are saying ‘how can I help,” she said. “We’ve had people really come out of the woodwork wanting to help.”

Madison County Senior Center Director listed the following with thanks for their support of the senior center:

•Woodman of the World, contributions to the Meals on Wheels Program

•The team of Meals on Wheels volunteers

Anyone interested in making donations to the center in money, volunteer time, items, etc., can call the center at 706-795-6250 or email ktyner@madisonco.us.