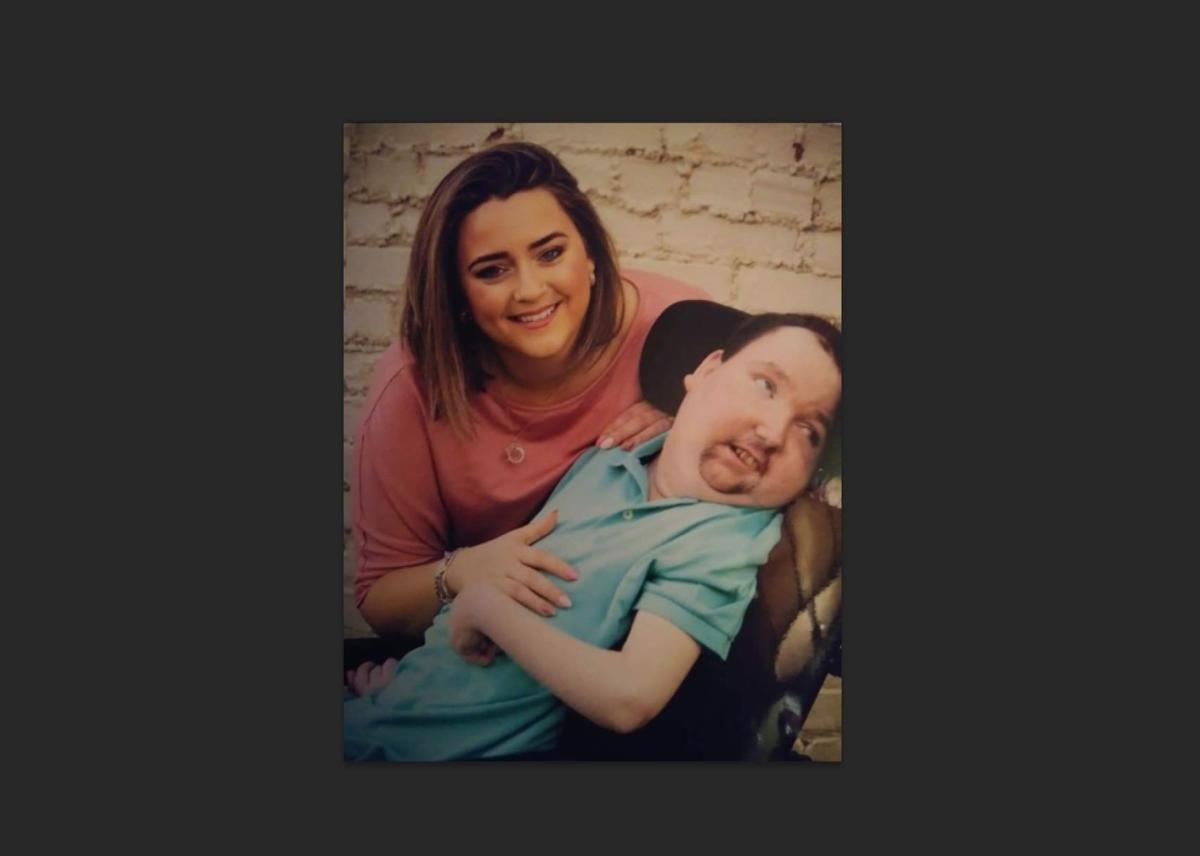 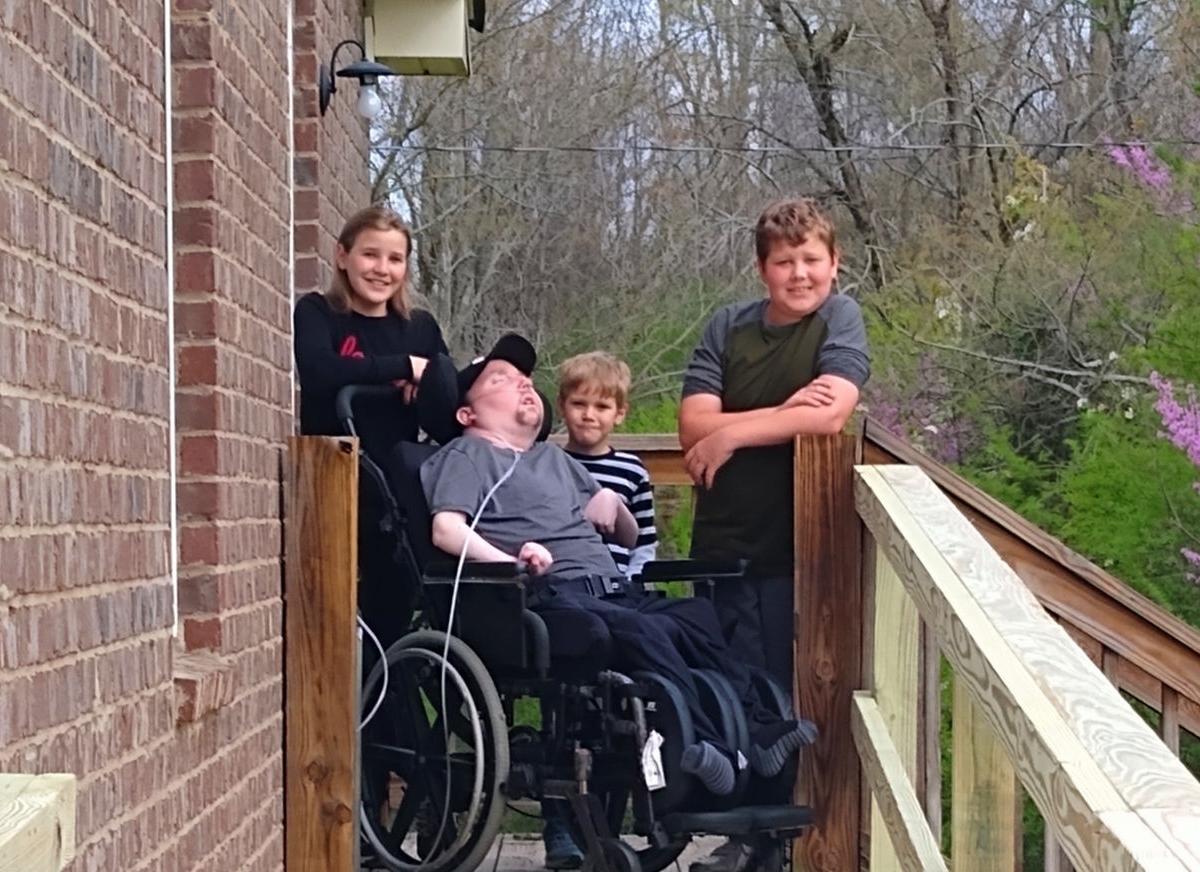 Madison County Rotary Club’s Ramp Crew constructed it 810th ramp for the Carithers family last month. And though every family they provide this service for is special, this family story’s story stands out.

Hope Carithers and her husband, Scott, have been married six years and together they care for son, Codie, 24, a quadriplegic with many other health issues and three other children they are hoping to adopt: Michael, 11, Ashlyn, 9, and Elijah, 5.

Codie, Hope’s son from a previous marriage, turned 25 on April 21. Codie has been paralyzed since a near-drowning incident when he was just 19-months old that also left him with breathing and other issues that require special care.

“Through the support of a caring family, Codie is a proud graduate of Madison County High School and was active in the Special Olympics for many years,” Rotarian Ed Brown said. “I think anyone that has ever attended the Special Olympics in Madison County will remember Codie…(This) family has fallen on hard times with Covid layoffs, etc. I think they are a hard-working family and are an inspiration to all the ramp crew and those that know them.”

Hope cared for Codie and his older sister, Kellie (Minish), now 29, for many years as a single mom before she and Scott connected on Facebook and realized they had known each other in high school. They eventually began dating and Scott committed himself to not only Hope, but to Codie and all that that entailed. She said Scott helps care for Codie when he is at work.

“Codie loves music so Scott often plays the guitar for him,” Hope said. Codie also loves to be outside, which before the Rotary built a ramp for him on March 30, Hope had always carried her son, as well as his wheelchair and oxygen, in and out of the home (he now weighs about 100 pounds).

She has a pickup truck that she uses to transport Codie, as well as the other three children, to doctors’ appointments in Augusta.

“I go back and forth from there pretty frequently,” she said.

Besides Hope’s daughter, Kellie, and Kellie’s two sons, who live nearby, their other children include Scott’s sons from a previous marriage; Draven, 21, who lives in Tennessee and Kaden, 13, who lives in Commerce with his mother. Hope says they visit often.

“Codie has plenty of brothers and sisters and cousins,” she said.

“They are my uncle’s children,” Hope explained.

She said her uncle had a stroke which left him unable to care for the children and their mother is currently incarcerated.

Hope said when she knew of the children’s situation, she petitioned the courts for custody of all three to keep them from being separated in the foster care system.

She and Scott received custody of the children from their mother in Nov. 2019. Now they are working to adopt them. Hope says all three kids say they want to stay with them.

Hope says she herself comes from a family that was separated when she was growing up. Her mother worked 16 hours in a cotton mill and her older three brothers were sent into foster care and later adopted. Her grandmother took Hope in at 6 months until her mother was able to reclaim her and her younger brother when she was 4 years old.

“I guess that has always stuck with me and even though I didn’t know these children well when we took them in, they were family and I didn’t want to see that happen to them,” she said. “I wanted them to be able to stay together as a family.”

She sees that their needs are met – getting them counseling and any other medical interventions they may need.

Hope said it is just in her nature to take care of people.

“It’s what I’ve always done,” she said. She cared for both her parents who had severe health issues until they passed away, she also cared for her grandmother and even her uncle for a period of time. And of course, Codie has had to have special care most of his young life.

Hope said like most families that were already struggling, they have been impacted negatively by the COVID-19 pandemic. They were living in a doublewide in early 2020 and were actively looking to purchase a larger home that would accommodate their expanded family when the pandemic struck and Scott was laid off from his job at SMI in Comer, though he has since been able to return. She said he loves working there and they have been very good to him and understanding when he needs to take time off for Codie.

They had already given up their rental lease on their doublewide in anticipation of purchasing a home, so they had to move.

“Scott’s parents were so kind,” Hope said. “They moved out of their home for a while to live in a camper in their backyard so we could live in their home.” This allowed the couple to save money on rent while Scott was out of work.

Eventually, they found a larger four-bedroom home with a handicap-accessible shower on Nowhere Road, which is where they live now. Their landlord, Joni Campbell, has been wonderful to them, Hope said.

After getting settled in, Hope said she asked her Facebook friends Larry and Linda Cox if they could contact the Rotary about building a ramp for Codie. She said she realized she and Scott were getting older and it was getting harder to move Codie in and out of the house.

The ramp has made all the difference to Hope in being able to get Codie from the house in his wheelchair to the truck.

“We are just so grateful to them for their help,” she said of the Rotary Club ramp builders. “Saying thank you to them just doesn’t seem to cover it.”

Of her and Scott, she says that though they have had their challenges, they have built a pretty solid marriage together.

“When it’s right, things should be easy between you,” she said. “And Scott understands that Codie comes first and that the future is uncertain.” She never knows when an issue could come up with her son that requires her to be away from home with him for a lengthy amount of time. And Scott understands this, she said. Hope said it also important that when problems or issues arise they all discuss things between them as a family.

“It’s all about Codie,” she said. And now, of course, it’s also all about Michael, Ashlyn and Elijah too.

“God gets me through every single day,” Hope said. “I pray every day for guidance and to be able to meet the challenge of that day.”