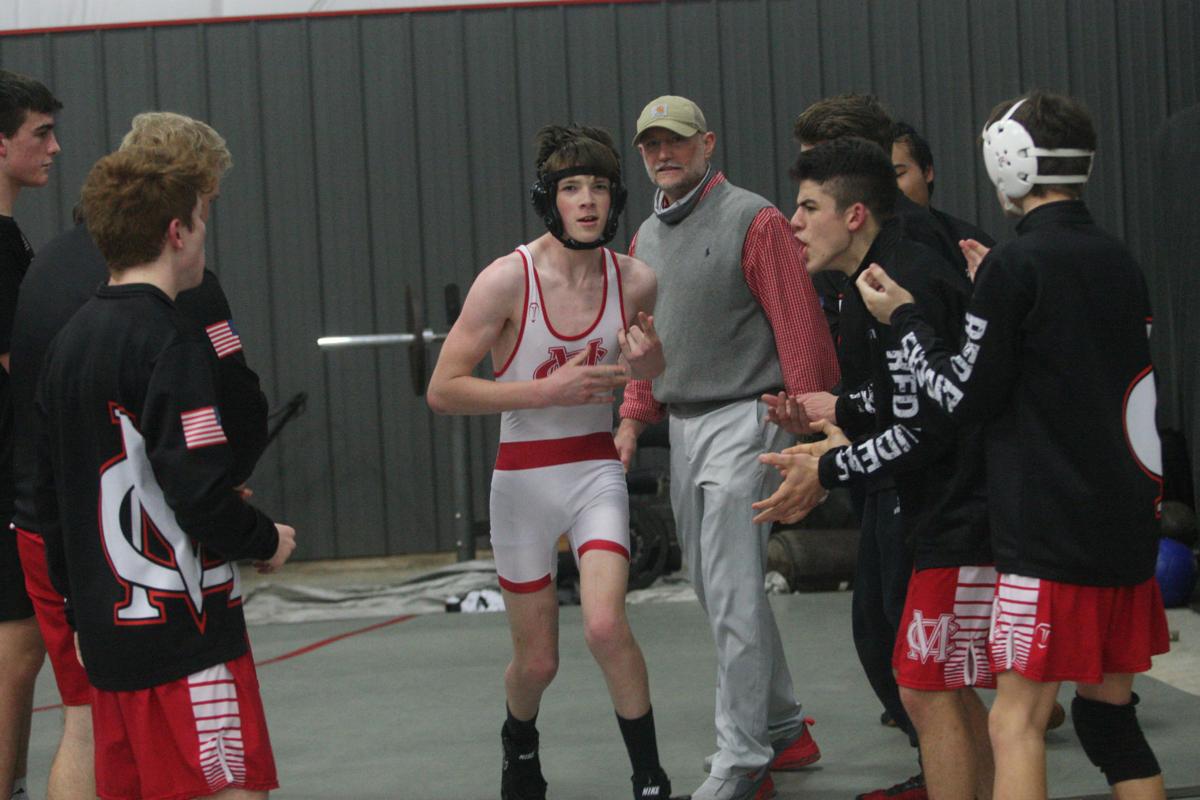 Reese Braswell is cheered on by teammates and his head coach as he takes the mat in recent action. 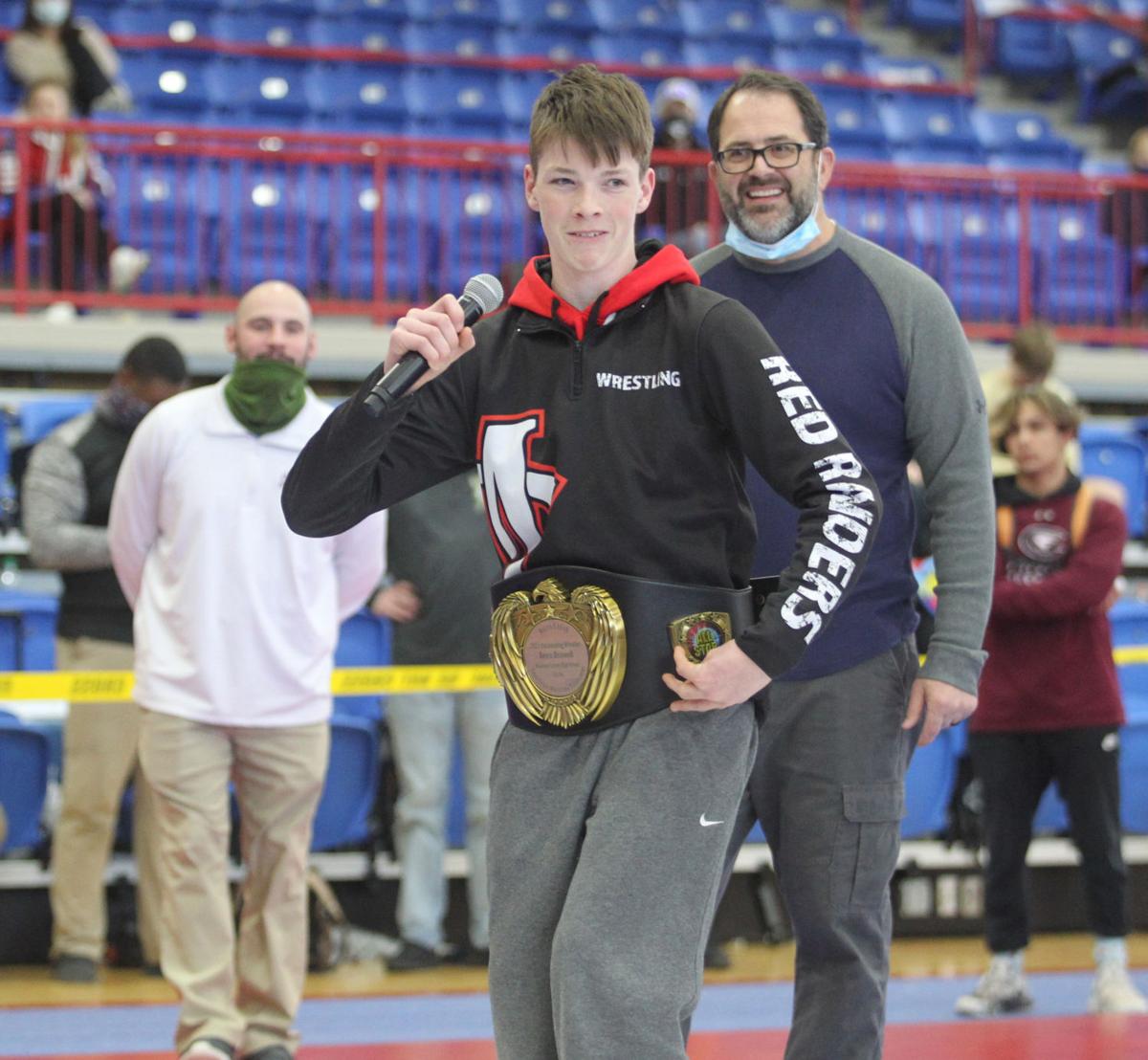 Reese Braswell is cheered on by teammates and his head coach as he takes the mat in recent action.

Reese Braswell feels at home on the wrestling mat, because he knows family is near, not just his actual family, but his wrestling one, too.

The Red Raider sophomore who suffers from cerebral palsy has been wrestling for three years and he said the bond he feels with his teammates is very real.

“I got into it and ever since, it’s been a family,” he said. “That’s just how it is. You come back to it. It feels like a family. You’re never going to get out of that, even if we don’t wrestle.”

Braswell battles more than just the opponent on the mat. Cerebral palsy affects muscle development. And Braswell had major surgery on his legs when he was 6.

“I just remember things being tough, but you can always get through them,” he said. “The best I can remember, I was about six and a half when I had my first surgery. I don’t remember much about it, but I can remember bits and pieces. When I was six and a half, I had 10 (surgeries) at one time. They put hardware on my shins and they went back and put hardware there (points to leg). And I’m fixing to have another one.”

He said he remembers a lot of therapy and “having my family right there doing everything I ever needed.”

Braswell said his upcoming medical procedure, which he said will be sometime this spring, will be “about as big as the first one,” with an expected recovery time of six months, though he said the first round of surgeries was closer to three months of recovery, not six.

“When I grow, my muscles don’t grow with me and so they tighten up,” he said. “And originally, they’re going to go in and pull my muscles, but the more they pull them, they’re going to become weak. So what they’re talking about doing is taking out a few bones so I can stretch out my leg. It will be more of a permanent thing, so I’ll have less surgeries.”

The Red Raider said there is pain with his legs, but he says he can manage.

“As it gets tighter, especially like right now on my knees and getting up from the floor, it does kind of hurt a little bit,” he said. “But it ain’t bad.”

The 113-lb. sophomore has impressed his teammates, coaches and Region 8-AAAA opponents with his grit. In fact, Braswell was presented with Region 8-AAAA’s “Most Outstanding Wrestler Award” Saturday prior to the introduction of those wrestling for region titles. He took the microphone and said a few words.

His head coach, Richie Houston, is really proud of him. He said Braswell seems wise beyond his years and conversations can feel like he’s talking with a grown man, not a high school sophomore.

“Let’s all be honest, we love sports and stuff, but the whole idea behind sports is that when you’re done with it, sports gives you something in life that you can build on,” said Houston. “And the kid’s got it in aces. He’s got that whole thing whipped. I think he’s just a true inspiration and he’s just a true joy to be around as a person, as a human being.”

Houston said his teammates care about him, too.

That kinship showed up in a big way recently when Braswell got his first high school pin against Central Carrollton.

“I think that was the most excited I’ve seen a group of kids in probably…ever,” said Houston. “That just shows you how much they care about him. They freaking went crazy, and he went crazy. I’ve never seen him jump, but he jumped about a foot high. He’s got some MJ skills.”

“I just went out there and did what I had to do and happened to take a shot and went right over the top of it,” he said. “It (wrestling) feels great. It’s a thing for me. It’s just what I do. I can’t imagine my life without doing it.”

He described what it’s like to learn to wrestle.

Braswell has other interests, too.

He said his dogs are Holly and Dakota.

“I got one Australian shepherd and one mutt,” he said.

He said his parents “push me to do anything I want to do.”

And he wants to study poultry science.

“I feel it’s just going to be what direction it takes me,” said Braswell. “I feel right now I’m just going to be working in the industry. I don’t know if I’d get my own (poultry houses), but if it comes up and that’s something that’s going to help me and my family, I’d definitely do it.”

He said he loves studying biology.

“I like biology,” he said. “I like the anatomy, I guess. Anatomy is hard, but I like studying all the cells and stuff. I want to be in it and studying and figuring out why that happens and why this happens.”

Braswell said whatever happens, you just have to keep going.

“The only thing that’s going to stop you is you,” he said. “I mean, you got people behind you. And that’s just how I feel. If I fail, I’m not going to fail every time. I’m going to get up and learn from my mistakes.”