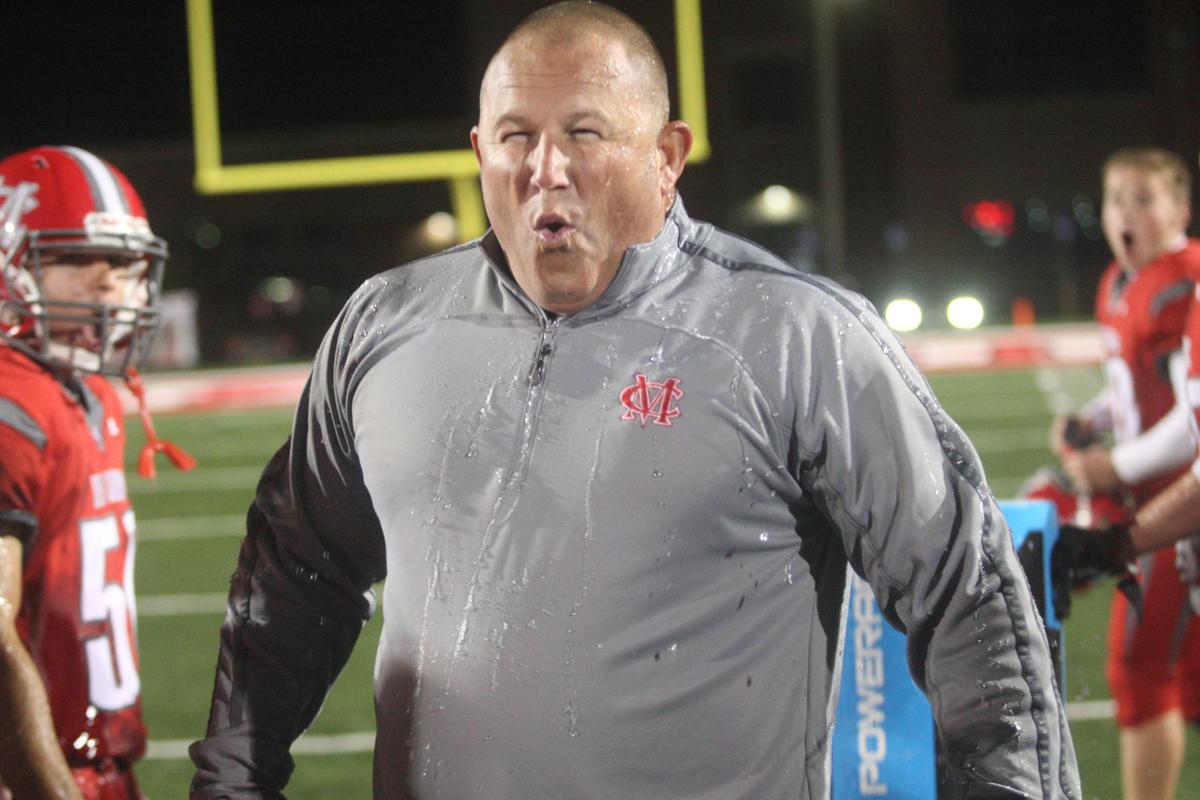 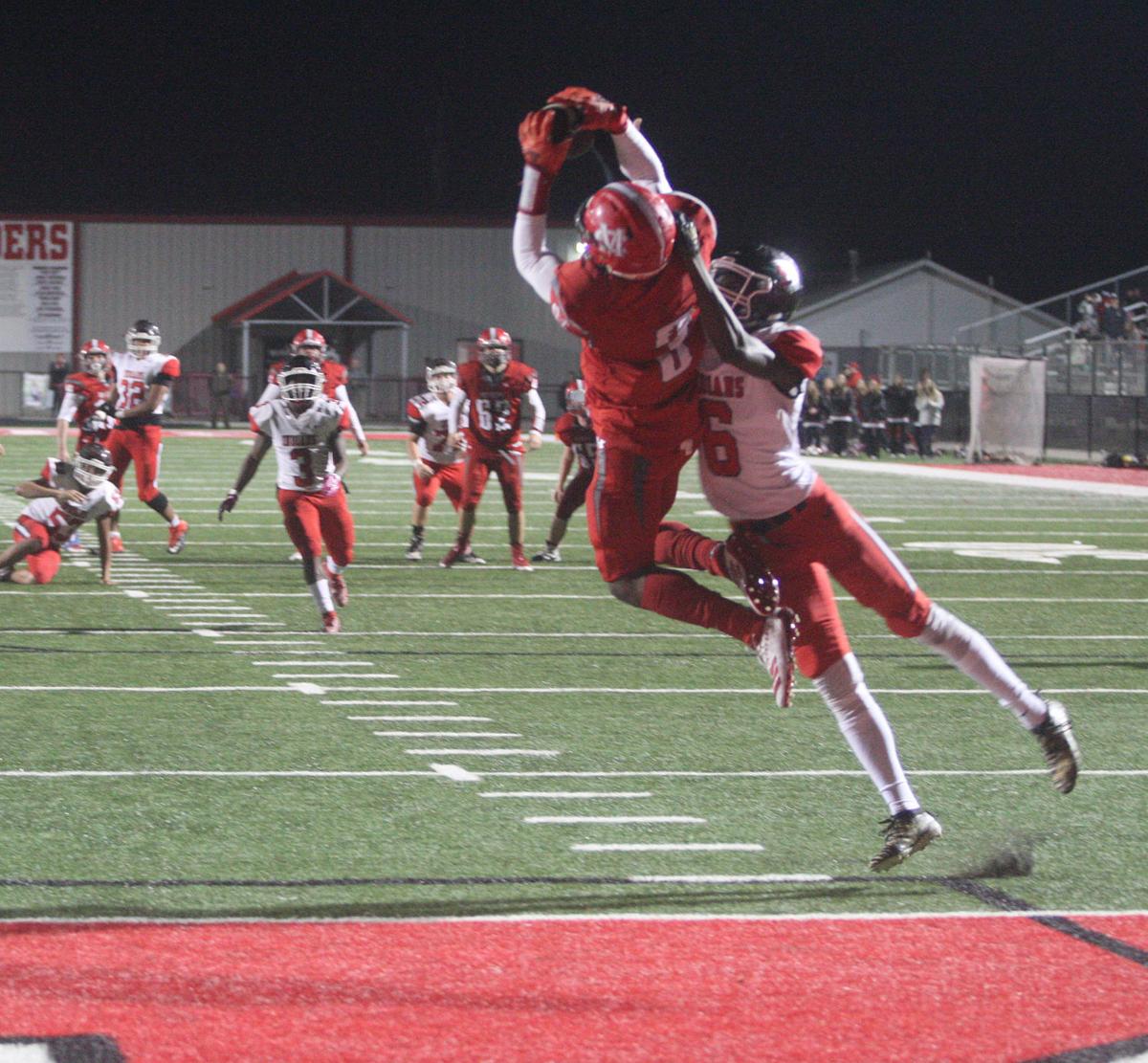 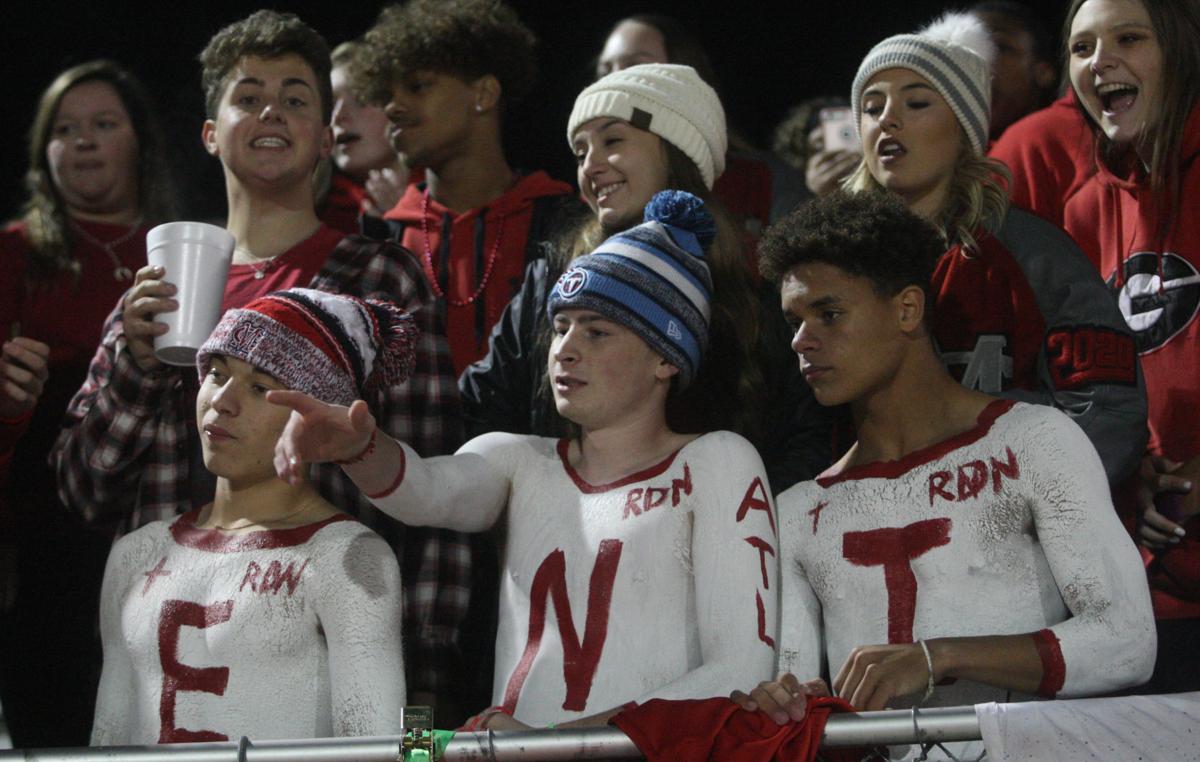 Some Red Raider students bundled up with body paint Friday. 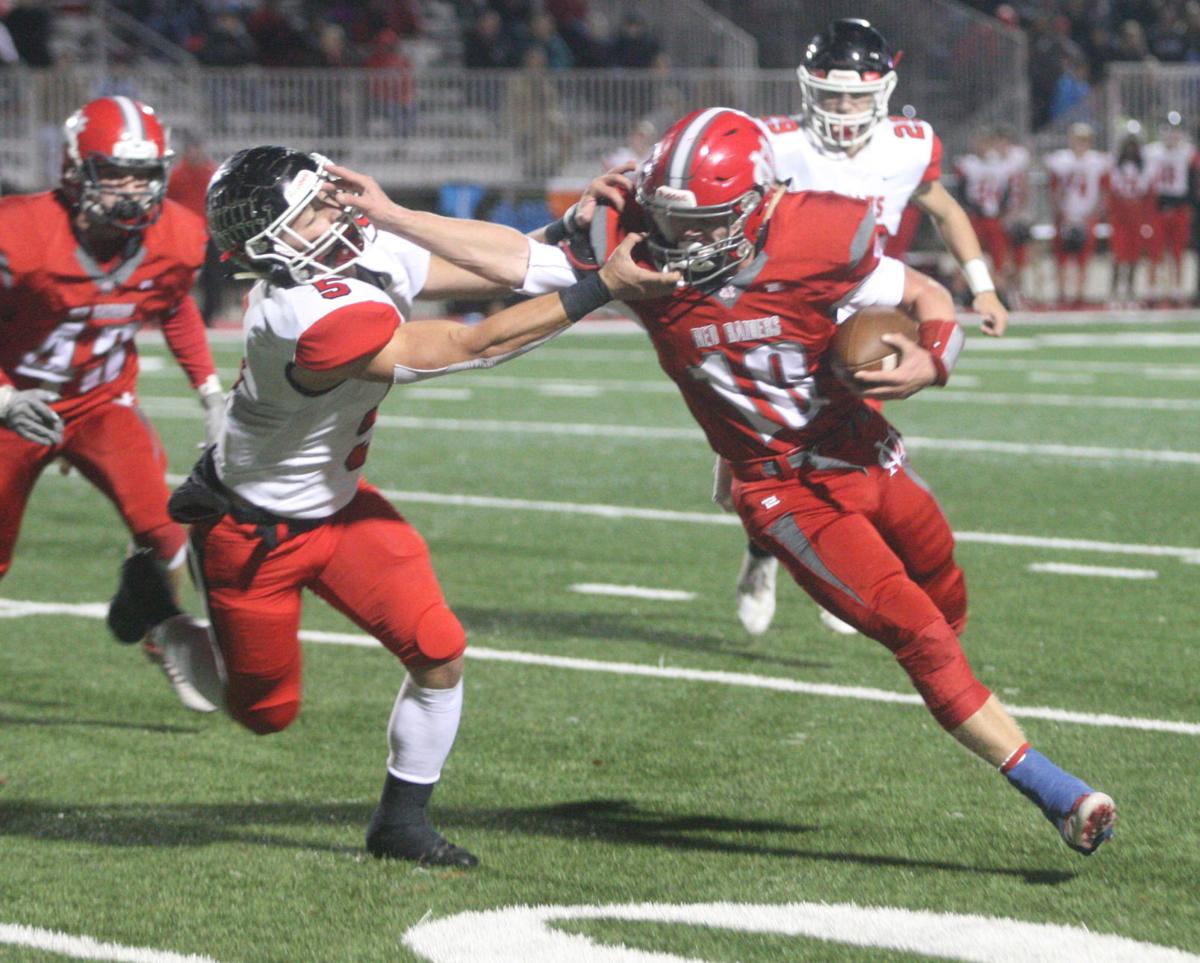 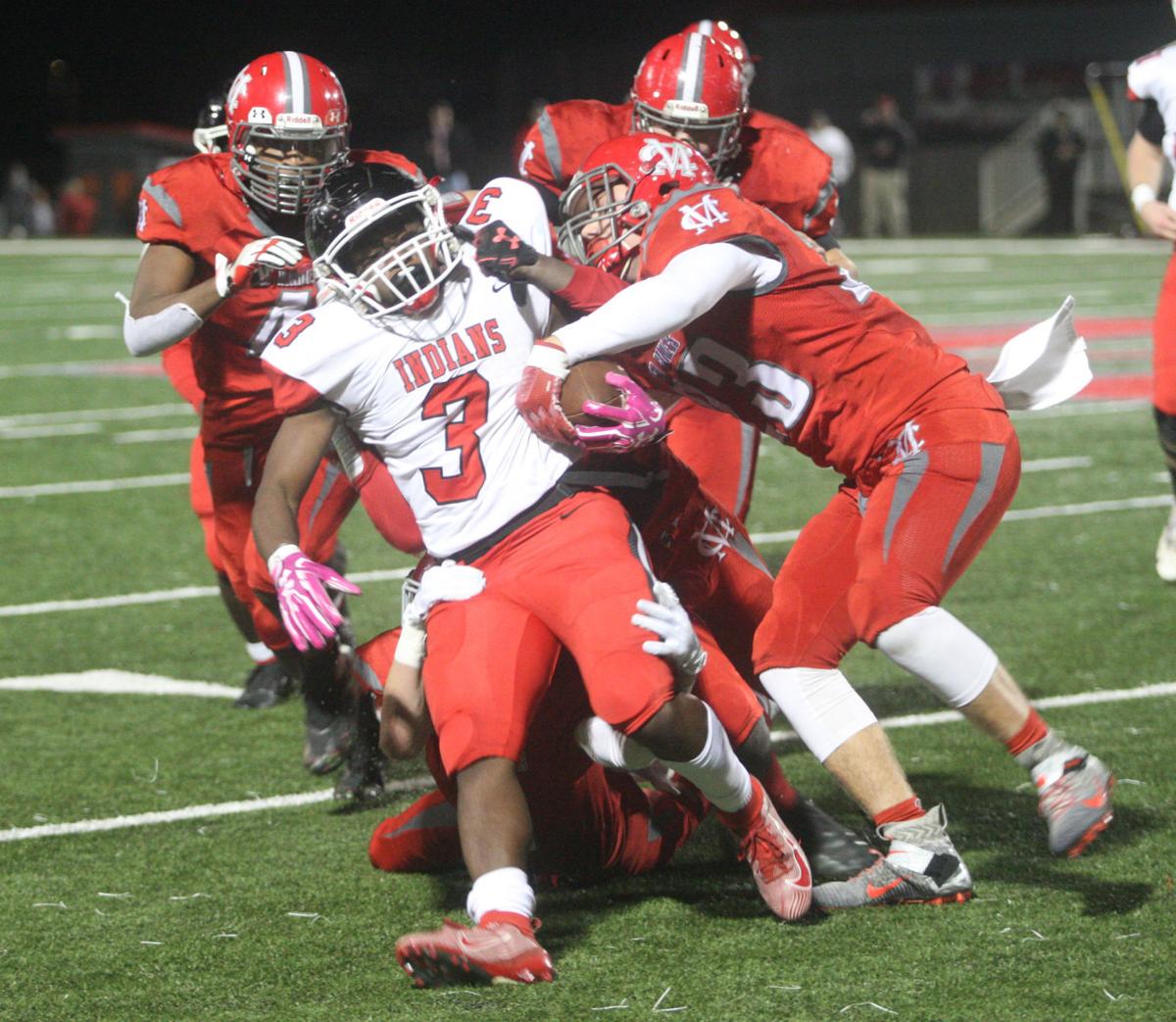 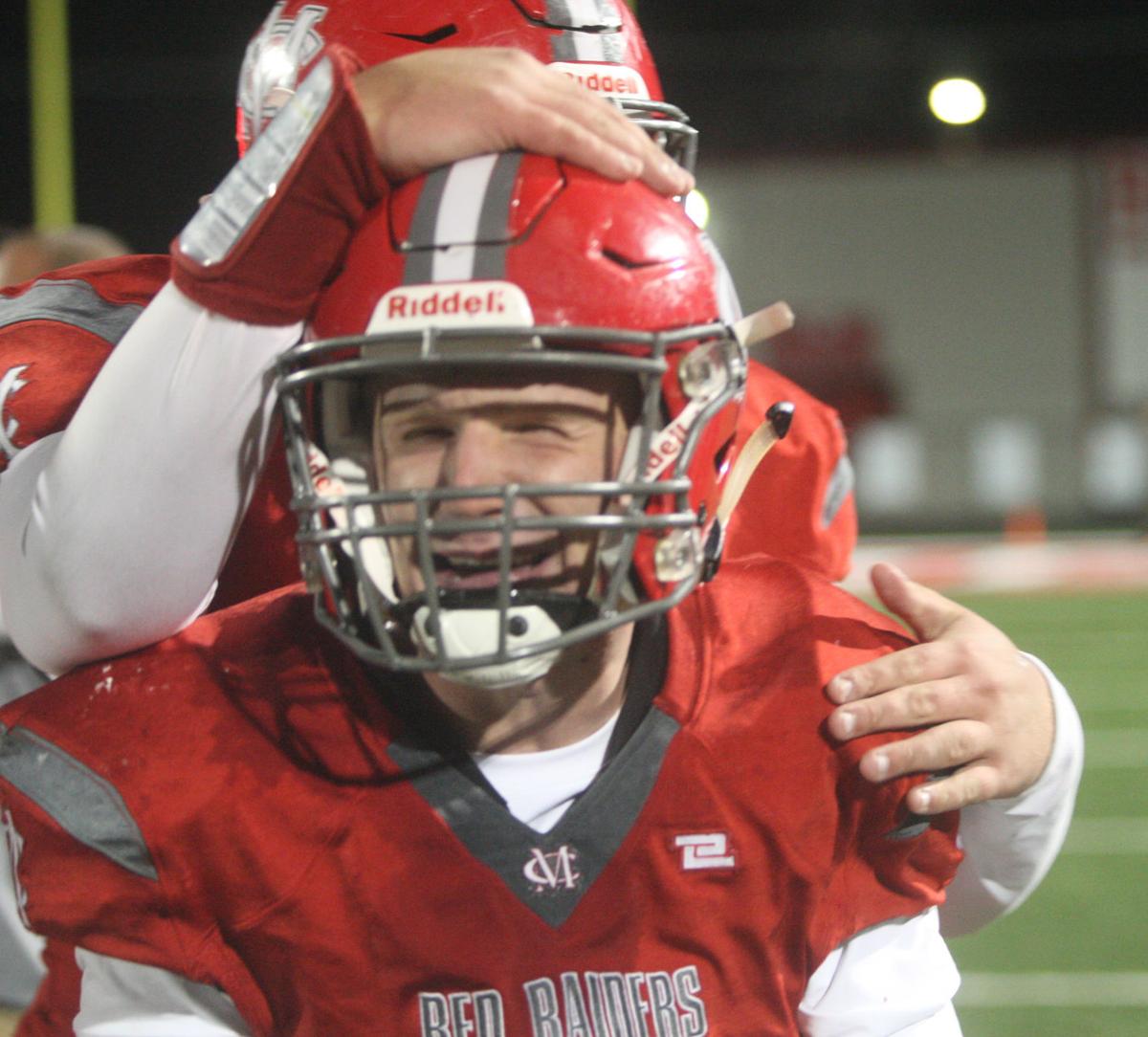 Senior Colby Smith is congratulated after the Red Raiders' 35-33 win on "Senior Night."

Some Red Raider students bundled up with body paint Friday.

Senior Colby Smith is congratulated after the Red Raiders' 35-33 win on "Senior Night."

It was a cold night for an ice bath, but Chris Smith wasn’t complaining.

The Red Raiders (4-5, 1-2) won in dramatic fashion Friday on a 19-yard touchdown pass from Colby Smith to Martavian Cooper on third and seven with just 29 seconds on the clock as the Red Raiders downed the Indians 35-33 in a nailbiter.

Cooper reached high over a Stephens County defender and snatched victory away from the Indians, while securing a playoff berth for Madison County. His teammates mobbed him in the end zone with celebratory hugs.

“We came out of the timeout, and he (Coach Smith) preached to me all week in practice about big-time players make big-time plays,” said Cooper. “So when we’re in trenches, I got to do what I got to do. The feeling was great. I know how to make a play for my team and that’s what I did.”

Colby Smith said the game-winning play was made possible by the offensive line because he had time to throw the ball downfield over the middle.

“I saw man coverage,” he said. “And my offensive line did a great job. I had at least three seconds to throw the football…I saw a seam and threw it and he (Cooper) ended up coming down with the ball.”

The senior quarterback said getting the victory on his final home game as a Red Raider felt great.

“I don’t know the last time Madison County has won on senior night,” he said. “This is special. It’s really special.”

Madison County struck first Friday when junior running back Dayton Gresham carried the ball in from one yard out with 5:58 to go in the first quarter. That score culminated a 60-yard scoring drive that included a 14-yard pass play from Smith to Cooper on fourth and four.

But Madison County punched back moments later. Cooper caught a 17-yard pass for a first down on third-and-15 from the Stephens County 20. Cooper then carried the ball into the end zone from one-yard out, putting the Red Raiders up 14-7 with 9:12 to go in the second quarter.

Stephens County’s MJ Jones scored from 13 yards with 3:06 left in the half to knot the score at 14, but Gresham responded with a 43-yard touchdown run just seconds later, putting the Red Raiders back up, 21-14, with 2:45 to go in the half.

Yet, the flurry of scores continued. The Indians’ Hudson Spurlock raced in from 24 yards with 1:56 in the half. And the teams entered the locker room knotted at 21.

Madison County got back on the scoreboard in the second half with Cooper carrying the ball in from 10 yards out on third and 10 with just under eight minutes left in the quarter, giving Madison County a 28-21 lead.

Cooper caught a 53-yard pass later in the quarter, setting up the Red Raiders with first-and-goal from the Stephens County 10. But Madison County fumbled the ball away at the 10. Stephens went three and out and was forced to punt, but a roughing-the-punter penalty gave the Indians new life, setting up the visiting squad at their own 28 yard line. Stephens County made the Red Raiders pay for the penalty, driving for a one-yard touchdown run on a quarterback keeper with 8:09. But the point after attempt sailed wide right. And Madison County clung to a 28-27 lead.

The Red Raiders drove to the Stephens County 32 on the ensuing possession, but Madison County fumbled the ball away and the Indians scored on a 23-yard touchdown pass to Bryson Trimier. The two-point conversion attempt failed. And Stephens County held its first lead of the night, 33-28, with 2:25 to go.

A Stephens County player appeared to be seriously injured on the point-after attempt. A hush fell over the stadium, but the player was able to get up and walk off the field.

Stephens County had been pooch-kicking short and right all night. So Coach Smith opted to put Cooper in position to catch the kick and make a return. It worked. He caught the ball around the 30 and returned it to the 50.

Colby Smith moved the Red Raiders into scoring position with a 26-yard gain down the home sideline. He was hit late by a Stephens County defender and tempers flared. Both teams were flagged. Madison County’s drive appeared to bog down at the 19 yard line, but that’s when Smith hit Cooper on the game-winning score. Adam Echols then iced the game with an interception.

“We got ourselves in a situation where we had to put the ball in the air right there,” said Coach Smith. “Big-time players make big-time plays in big games. And our quarterback made a great throw and our receiver made a great catch. If I’m going to put it down to two people, I want the ball in those guys’ hands.”

The coach was full of praise for his guys. He said Gresham played outstanding. And he was particularly happy with his offensive line.

“Bottom line, our O-line played their butts off tonight,” said Smith. “I mean, we don’t get any of that done without those guys up front… Chandler Phillips, James Matheny, Justin Owens, Lucas Childers, Dylan Vining, Chase West, Kameron Richardson — those guys got it done tonight. Without them, we’re not even in this football game.”

Smith was full of joy for his guys.

Colby Smith said he and his teammates never gave up.

“We talked about it all week; we can’t ever hang our heads,” he said. “We haven’t hung our heads all season. And we came out tonight and they scored with two-and-a-half minutes left. We were telling each other, ‘We got to drive down the field; we got to score. We got to keep our heads up. We got to put this in end zone.’ And that’s what we did.”