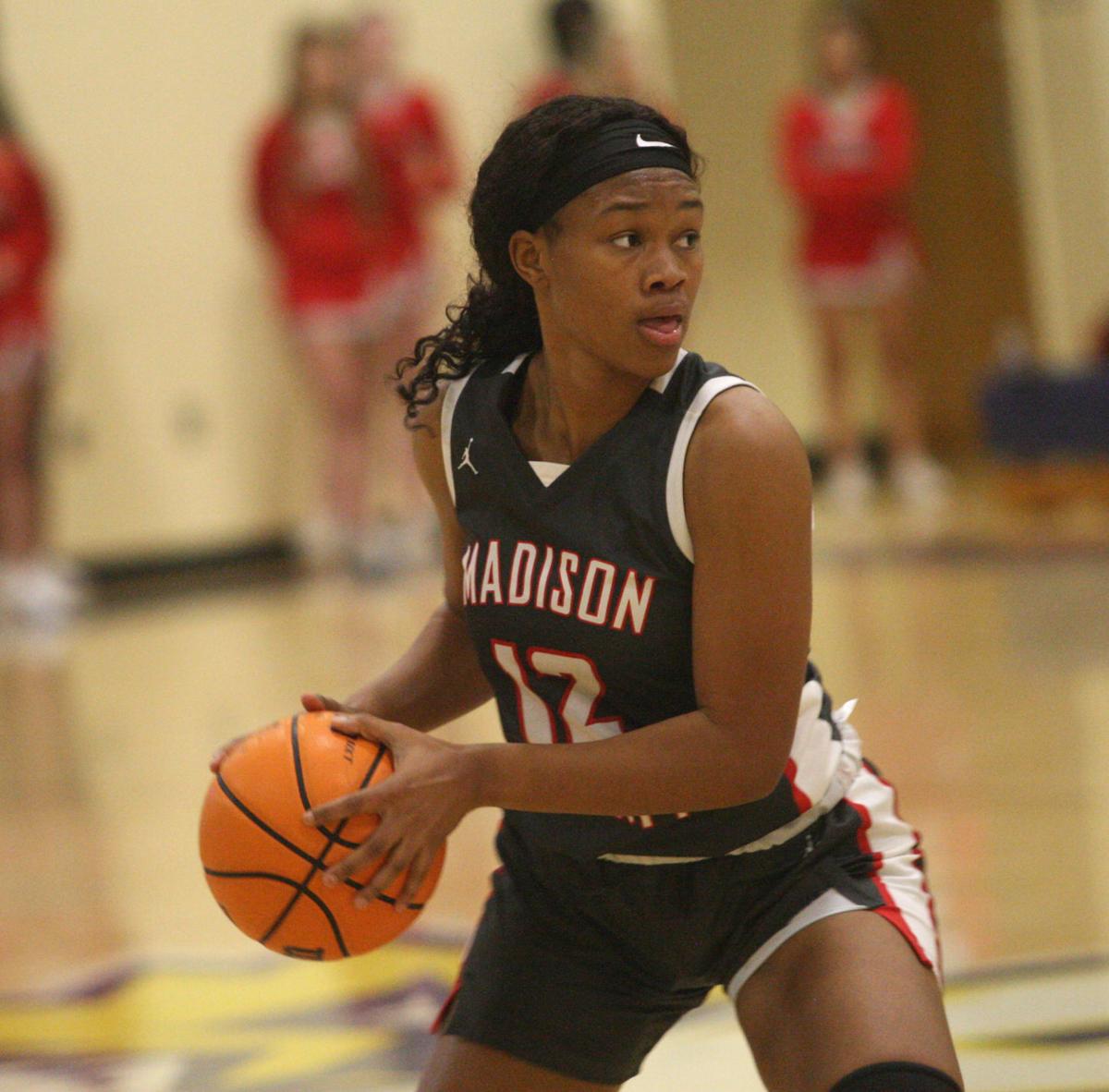 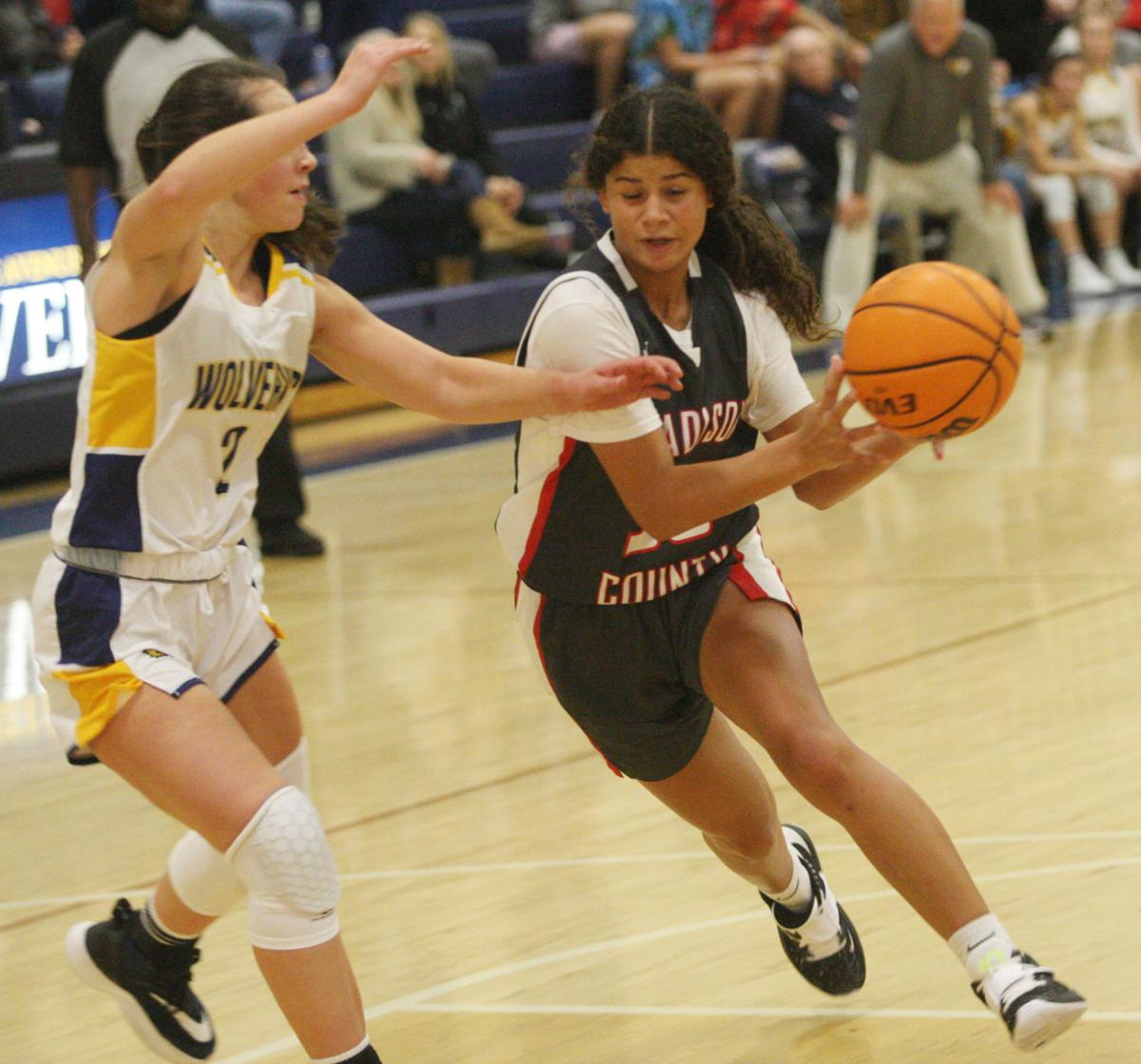 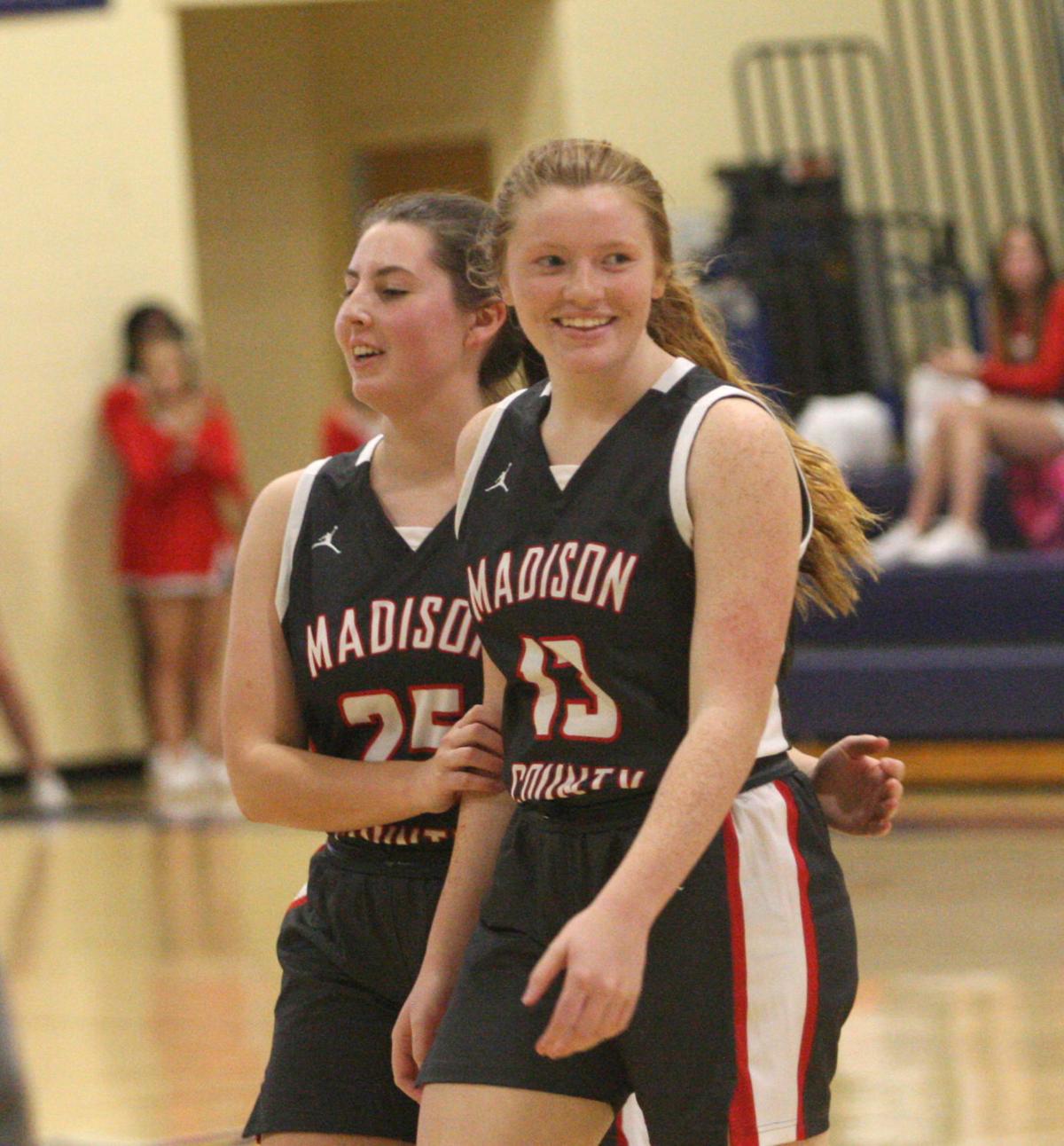 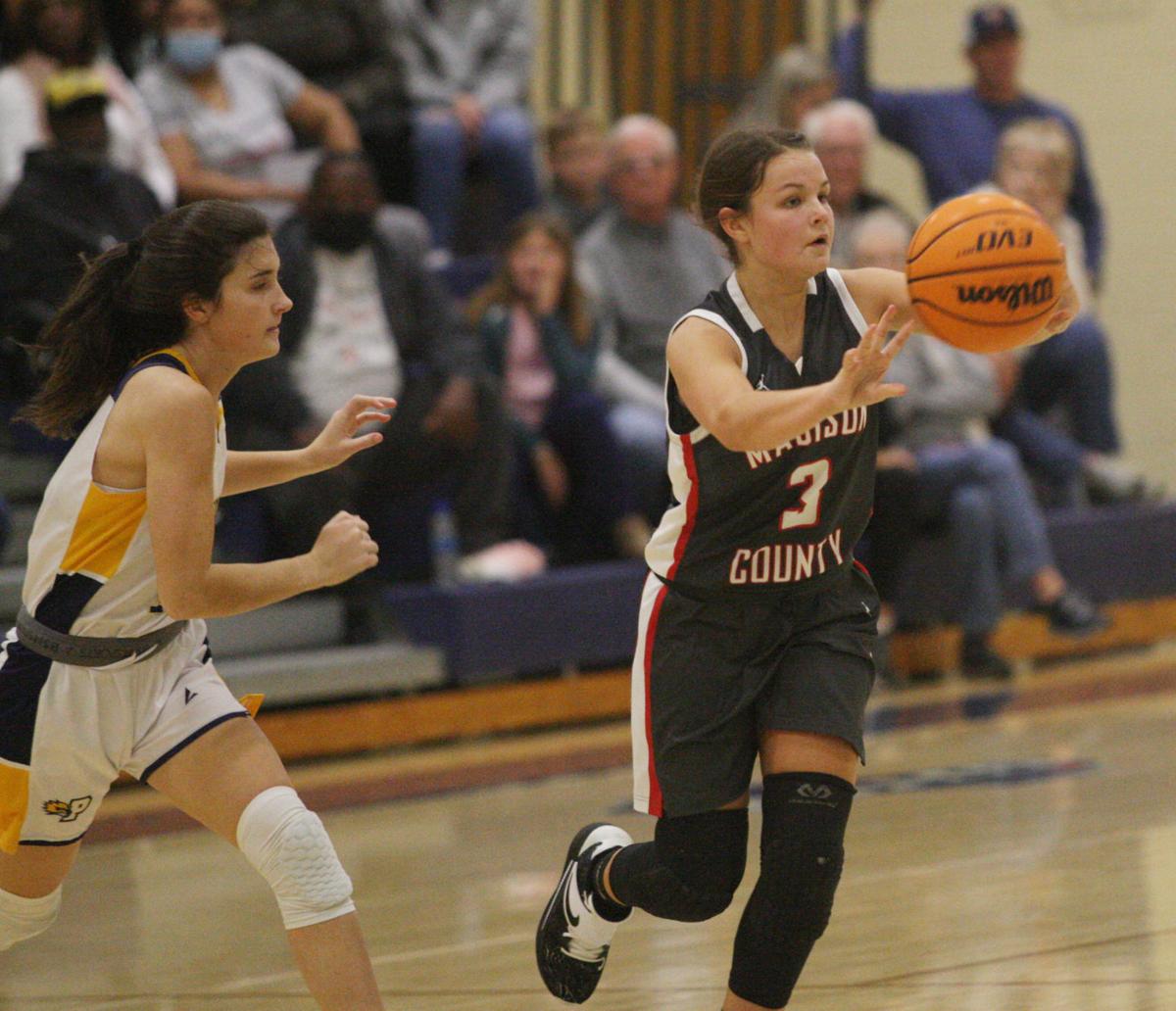 Kate Bray throws a pass to a teammate Saturday. 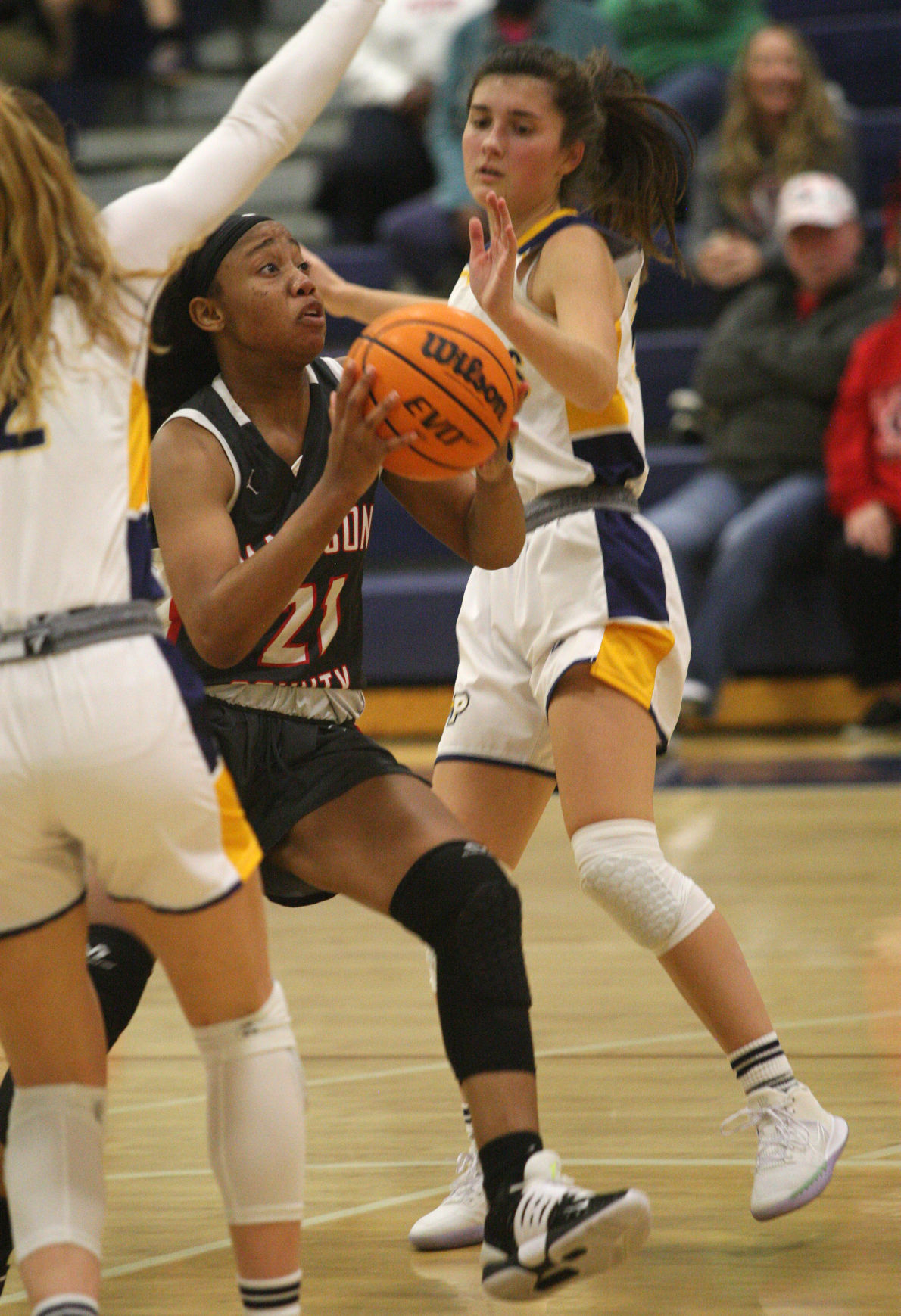 Kate Bray throws a pass to a teammate Saturday.

Madison County’s girls’ basketball team didn’t get the win, but the Red Raiders showed something to head coach Dan Lampe Saturday in a 46-39 loss at Prince Avenue.

Madison County dove for loose balls and played with tenacity, grabbing an early 10-5 lead Saturday, but the Red Raiders hit a scoring lull in the second period, when the Wolverines took a 17-15 lead, then carried a 25-16 advantage into intermission.

The Red Raiders slumped offensively for about a quarter and a half, but then back-to-back three-pointers by Kyrsten Watts and Mallory Bates cut the Prince lead to 25-22 midway through the third period.

The game stayed tight the rest of the way, with three-to-four points separating the squads into the final moments.

Lampe said the team is “finding our step.”

“We’re too young to just ad lib,” he said. “We have to be a little more structured. And it’s a fine line, because we’re pushing the break and you want to get some easy stuff. But you don’t want to take bad shots.”

The coach praised the play of several Red Raiders.

“I thought Tiff (Tiffany Wilson) really showed out at the end,” he said. “And Mallory found her three ball. Kyrsten played lights out. She was a go-to person.”

Lampe said a key to the season will be the play of Hall, a freshman point guard.

“Jordan Hall has the keys to the car,” he said. “She’s got to learn how to push it and then back it up and set stuff up. She’s not far off from it. She’s real close to learning that.”

The coach said his team hustled but got some bad breaks.

“We couldn’t get the stop when we needed it and so many of those, they got their points on second, third, fourth looks,” he said. “It seemed like one of those nights where we were hustling, but it seemed like all the balls led to them.”

Lampe said his team needs to box out better on the boards.

“We just have to be a little more physical getting those boards,” he said.

He said the first game was a good learning experience.

“Being the first game, I learned a lot from this one,” said the coach. “I really think as the season goes on, we’re going to start honing it in and finding what we do, finding our pace and who we want to go to in what situations.”

Madison County will visit Commerce at 6 p.m. Tuesday, then be off until Nov. 30 when they play their first home game at 6 p.m. versus Elbert County.