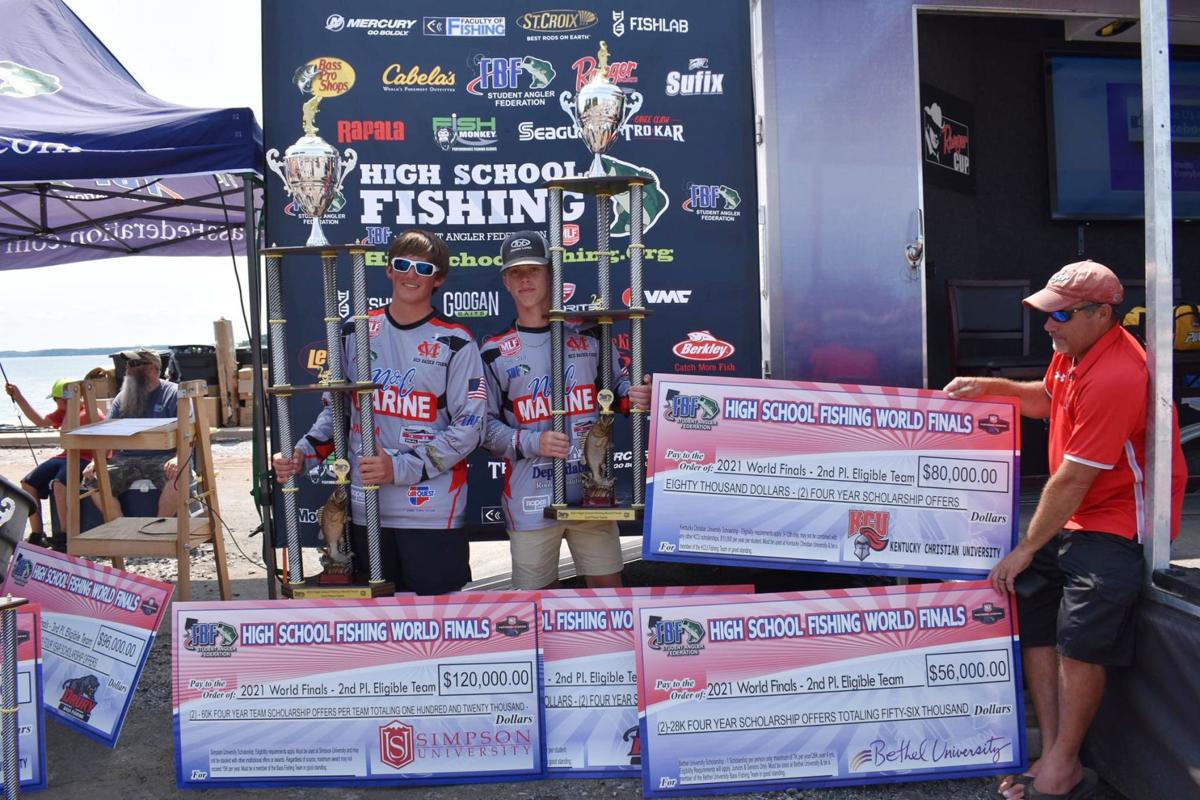 Logan Fisher (L) and Will Hart (R) are pictured with their second-place world championship trophies and their multiple scholarship offers. 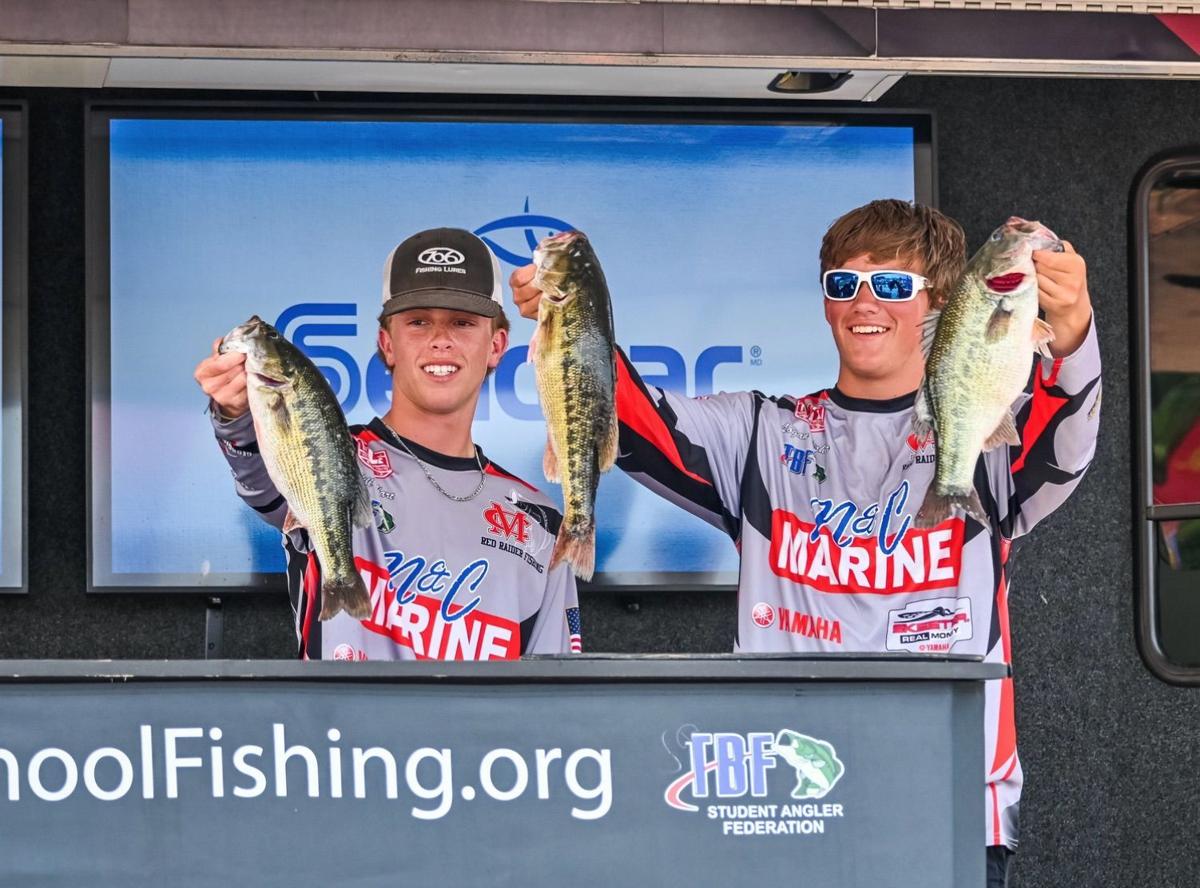 Will Hart and Logan Fisher show off their catch. 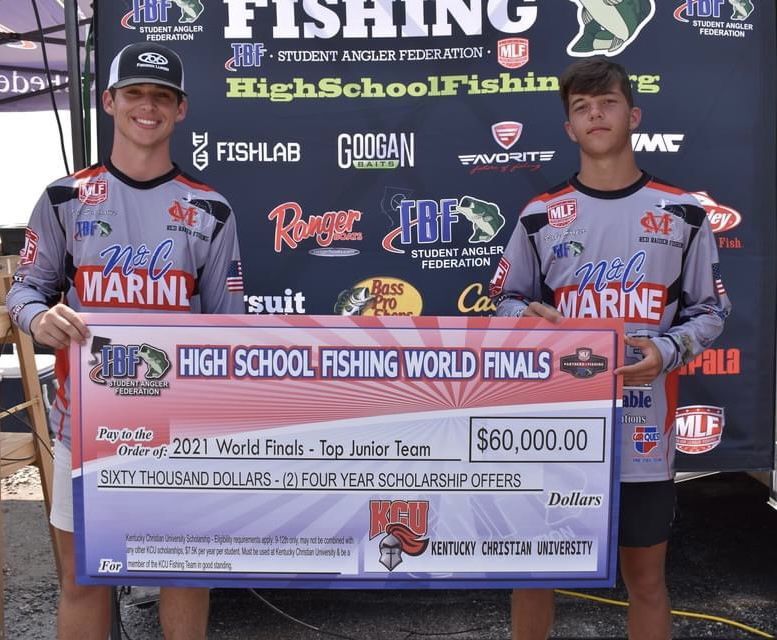 Levi Seagraves (L) and Blake Hooper (R) finished seventh in the high school world fishing tournament at Lake Hartwell and are pictured with their scholarship offer from Kentucky Christian University.

Logan Fisher (L) and Will Hart (R) are pictured with their second-place world championship trophies and their multiple scholarship offers.

Will Hart and Logan Fisher show off their catch.

Levi Seagraves (L) and Blake Hooper (R) finished seventh in the high school world fishing tournament at Lake Hartwell and are pictured with their scholarship offer from Kentucky Christian University.

Four Madison County fishermen are reeling them in — not just the fish, but the trophies, the scholarship offers and the attention of fellow anglers near and far.

Madison County High School rising juniors Will Hart and Logan Fisher have what amounts to new bedroom furniture now, the massive trophies for finishing second in the nation and the world. Meanwhile, fellow Red Raiders Levi Seagraves and Blake Hooper, rising seniors, finished close behind them, taking sixth in the nation and seventh in the world.

The four just wrapped up the U.S. Army High School Fishing Championship at Lake Hartwell, which included 398 boats in the four-day tournament with high school fishermen from around the world.

And no doubt, the guys put Madison County on the fishing map.

“It was crazy having all those people out there on that lake,” said Fisher. “And it was real cool because we had camera boats following us the whole time. And we were catching fish. It was fun.”

Hart and Fisher racked up over half a million dollars in scholarship offers from colleges around the country. Fishing can now pave their way to a secondary education. Seagraves and Hooper also received a scholarship offer and are getting interest from colleges with fishing programs. The two led the entire field after day one.

“It was good for the school, for sure, to have two boats at the top of that many boats,” said Seagraves. “We had people from other countries and just about every state in the nation. It meant a lot to have us both up there and making a name for ourselves.”

The tournament wasn’t easy. The temperatures were blistering. The lake was crowded. And being in the right place at the right time to catch a big bass was a challenge.

“It was really tough getting on the spots you wanted to get on,” said Travis Seagraves, who captained the boat for his son, Levi, and Blake Hooper. “You were playing musical chairs really.”

Each team caught three fish a day to be weighed in the four-day tournament.

“We knew there was going to be a bunch of boats,” said Hart. “We knew it was going to take a pretty good sack every day. So we just had to stay up there. We were just going to try to get three good ones and try to stay in the top 10 every day to make it to the nationals and then go to the world. And we did, it was a crazy experience, going there with 400 boats and all the things they gave us, like scholarship money and big trophies.”

The Madison County fishermen have risen to the top of the pack with a lot of hard work and experience.

“Since middle school we’ve all been working hard and working together, getting as much time on the boat and lake as we can going from state to state and fishing different lakes and learning how to fish different waters,” said Levi. “It’s just helped having all that time out there.”

Hart and Fisher also took second at the Bassmaster High School Series Classic on Eagle Mountain Lake and Lake Worth near Fort Worth, Texas, with the weigh-in held at Dickie’s Arena in front of a large crowd.

“It’s just cool going out there in front of all those people and weighing in and getting to show them our fish,” said Fisher.

Chad Hart, Will’s dad, captained the boat for Will and Logan. Logan’s dad, Pat, also captains the boat at times.

“My dad fishes shallow, but they fish deep,” said Logan. “So he (Will) is learning shallow, and I’m learning deep.”

Will added: “So it works out for both of us; you get to learn from two different things.”

Chad said the guys have experience in many waters.

Will and Logan said Okeechobee is probably their favorite.

“They just bite up there,” said Logan.

“There are some big fish up there,” said Will. “You never know what you’re going to catch. Every flip you could hook a ten pounder.”

Chad said he’s proud of what Will and Logan are accomplishing.

“They’re doing good; they still have a lot to learn,” he said. “Their biggest goal to me is to get a scholarship out of this. That’s what they’re driving for. They’re trying to get a scholarship and then you go from there. Cause it’s big now. It’s a big deal. If you get good in college, maybe you can get you a sponsor to try the other stuff (fishing professionally). Me and will and his (Logan’s) daddy and him, too, we fish in a lot of local tournaments, just us. And Pat does with Logan and we’re competitive. And you fish against two grown men and you’re winning just as much as the other people are. It feels good.”

Travis Seagraves said he’s proud of the intensity Levi and Blake show on the lake.

“They don’t pick up a phone,” he said. “They don’t check nothing. They’re at it the whole time.”

He talked about the thrill of the first day at Lake Hartwell, when Levi and Blake finished first among 398 boats.

“It kind of started off as an average day catching fish, and we just kind of upgraded during the day,” he said. “It was really hot and just slick and they kind of quit biting. We weren’t due back in until 4 that day. It was about 1:30 and I said we’re going to go back up, I was scared the fish were going to die, running out of ice, just couldn’t keep the water cool and I was scared they was going to die. And we pulled up on the next few stops and Levi caught a big one, I think it was close to 5 lbs. And then the emotions went pretty high then. I knew we’d be in the top 10. So we just made the decision. We just need to go back in. So we went back in an hour and 45 minutes early.”

“We were familiar with it being closer than a lot of other teams,” he said. “But a lot of these teams aren’t used to fishing deep lakes like this. Since we’re up there multiple days a week, we kind of knew what to do, how to catch fish during this hot weather. A lot of teams just didn’t know how to do that. And that helped us do well.”

Levi said he wants to make a career of fishing.

“I plan to fish in college for sure,” he said. “I haven’t decided which school yet or where I’ll go, but I plan to if not fish past college, at least stay in the industry somehow.”

He’s not alone in that desire. And the four Madison County fishermen haven’t just caught fish. They’ve reeled in options, catching the attention of colleges. They have the attention of their competitors, too.

Any yes, they have the attention of people looking for a tip on how to hook ‘em.

“I’ve had plenty of people text me and ask me what to do, like want to go fishing me with and want to learn stuff,” said Will.