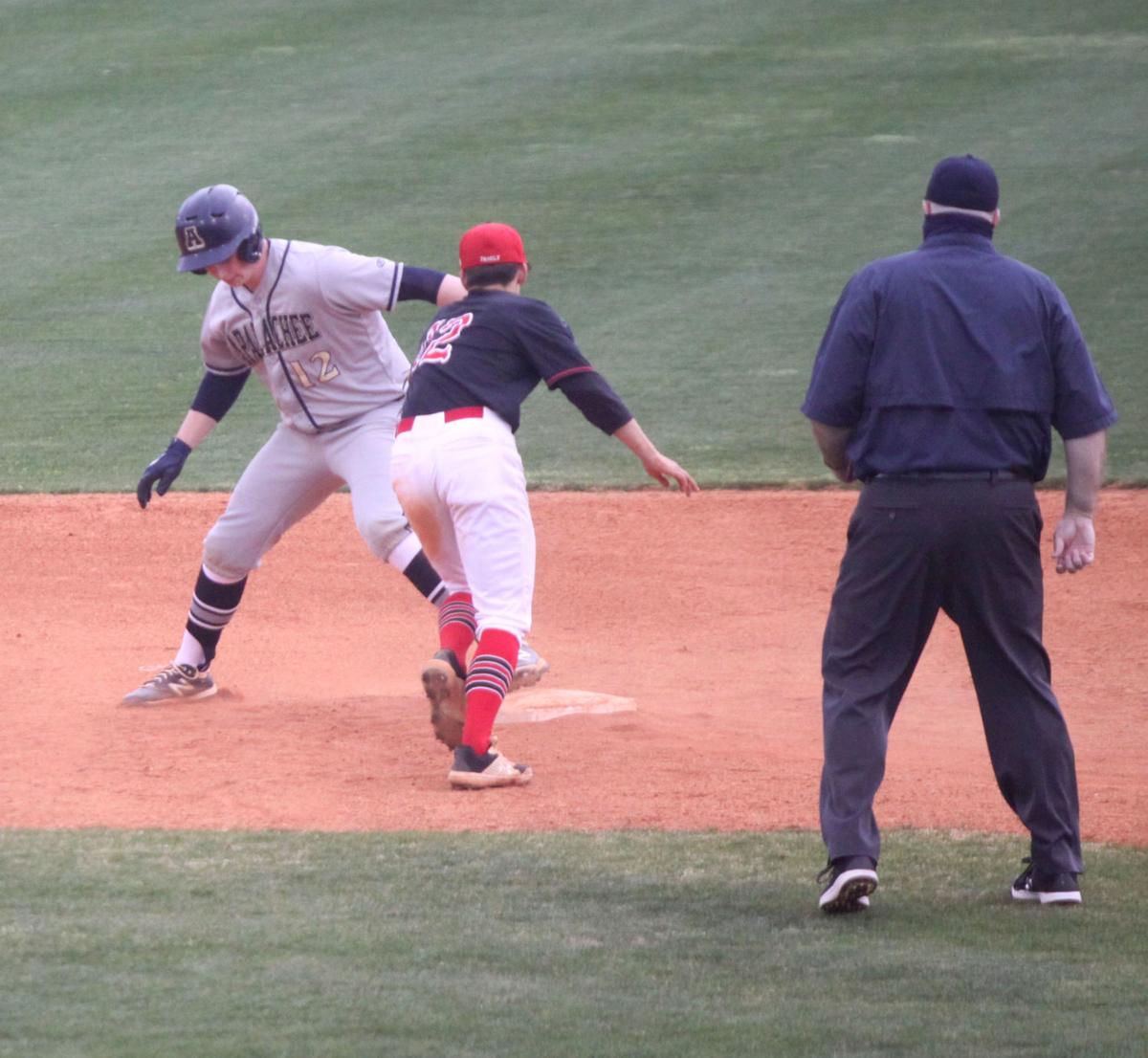 Apalachee's Judah Powell stays safely on second base after an RBI double in the third inning of Monday's GHSA Region 8-AAAAA game at Jackson County. The Wildcats lost 3-2. 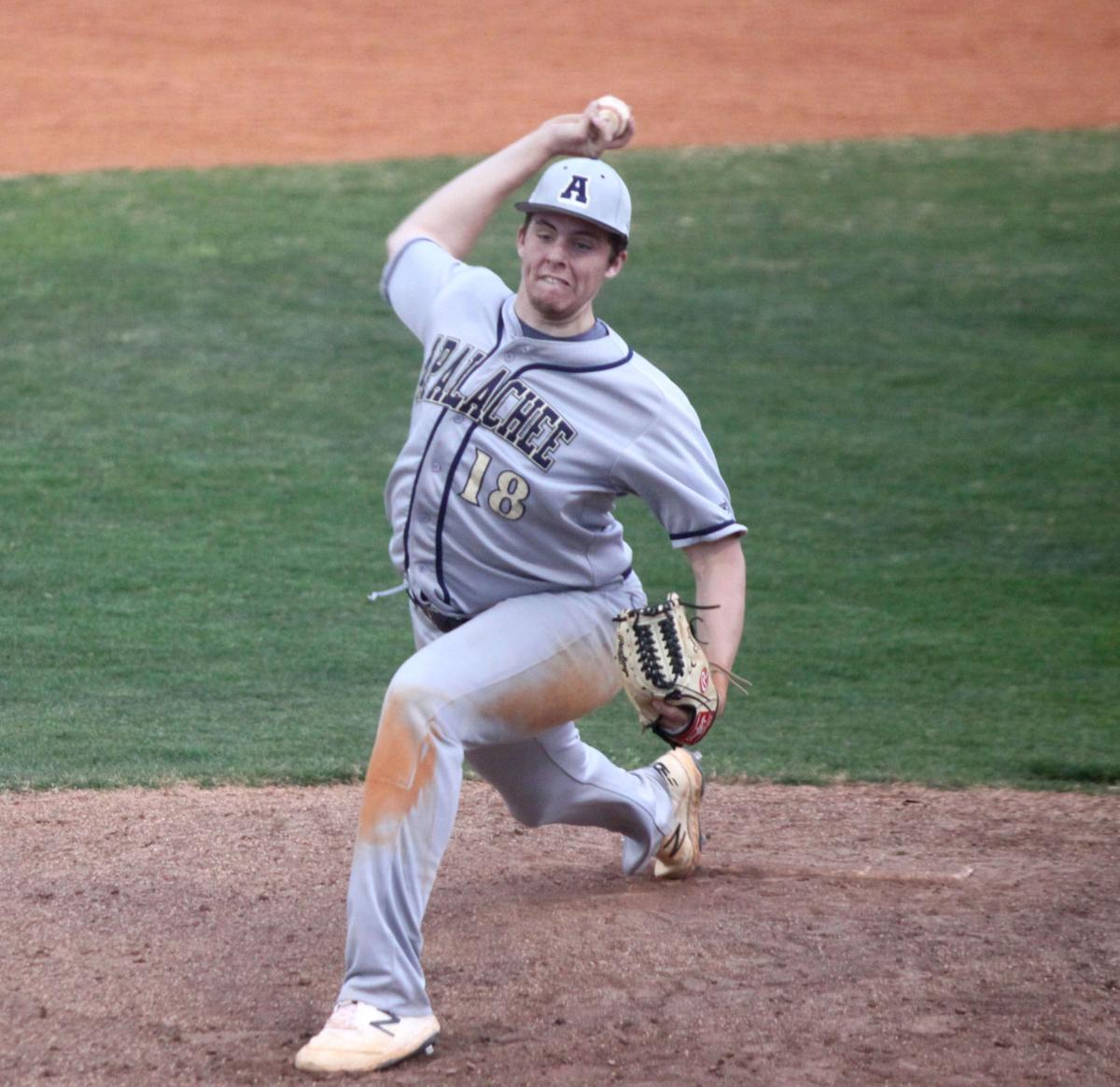 Manning West delivers a pitch for Apalachee during Monday's game. 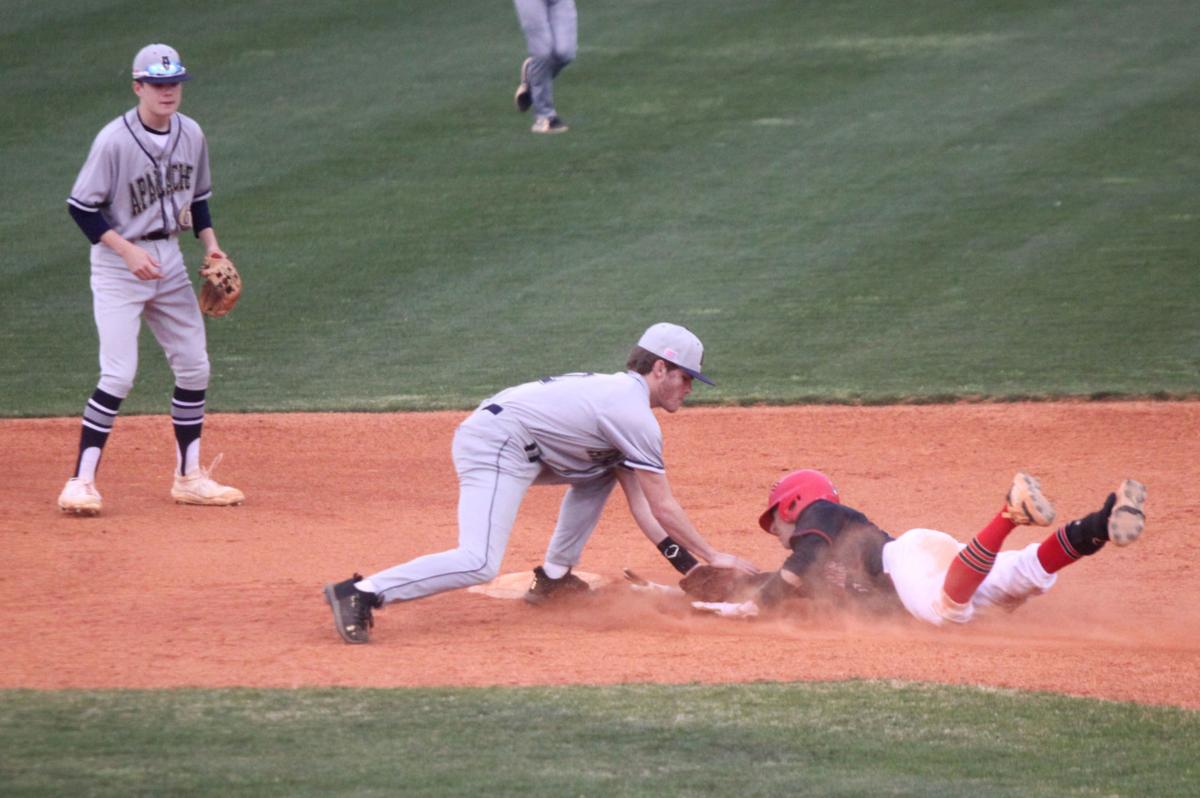 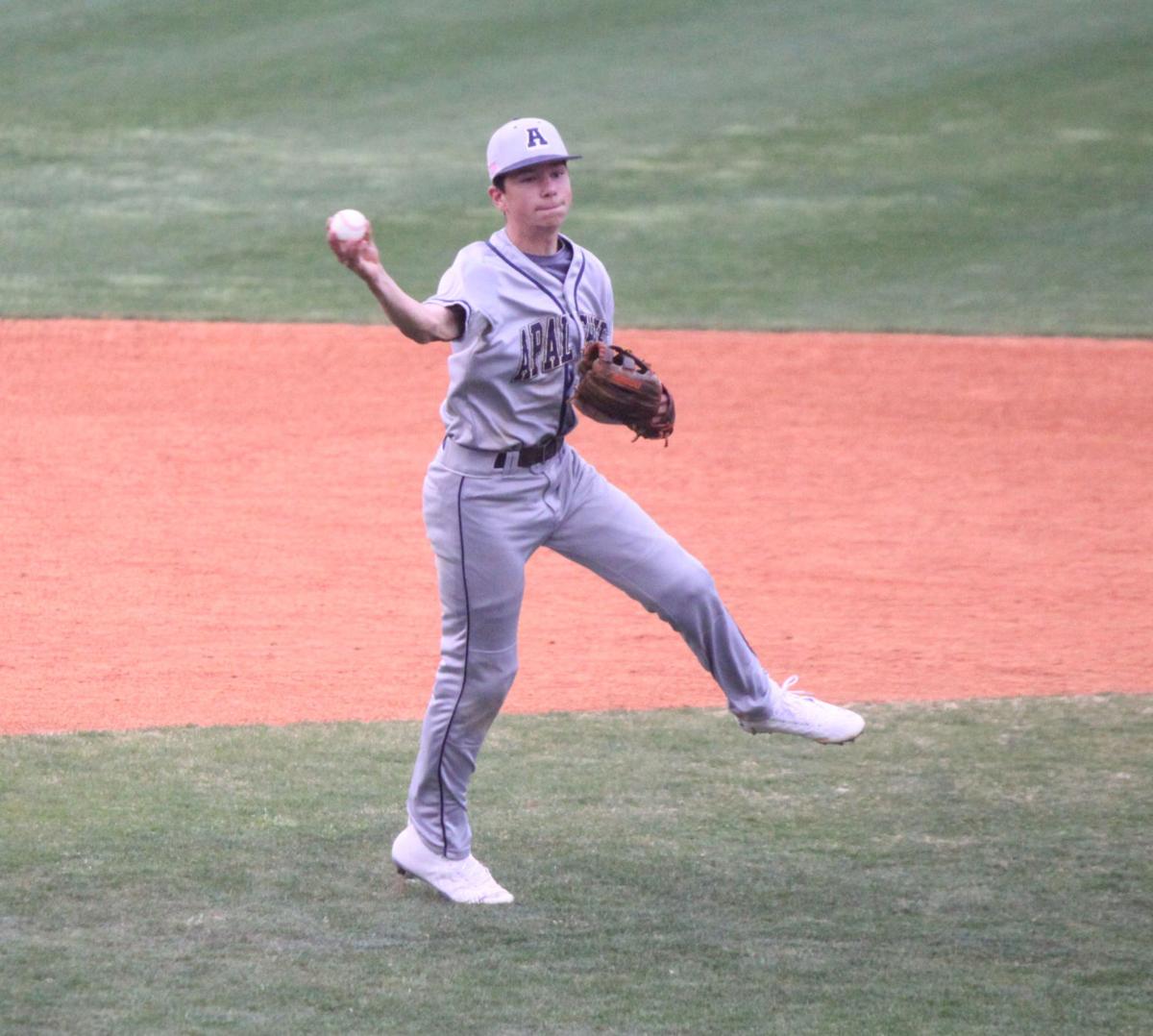 Apalachee third baseman Ashton Sapp tries to throw a runner out at first during Monday's game. 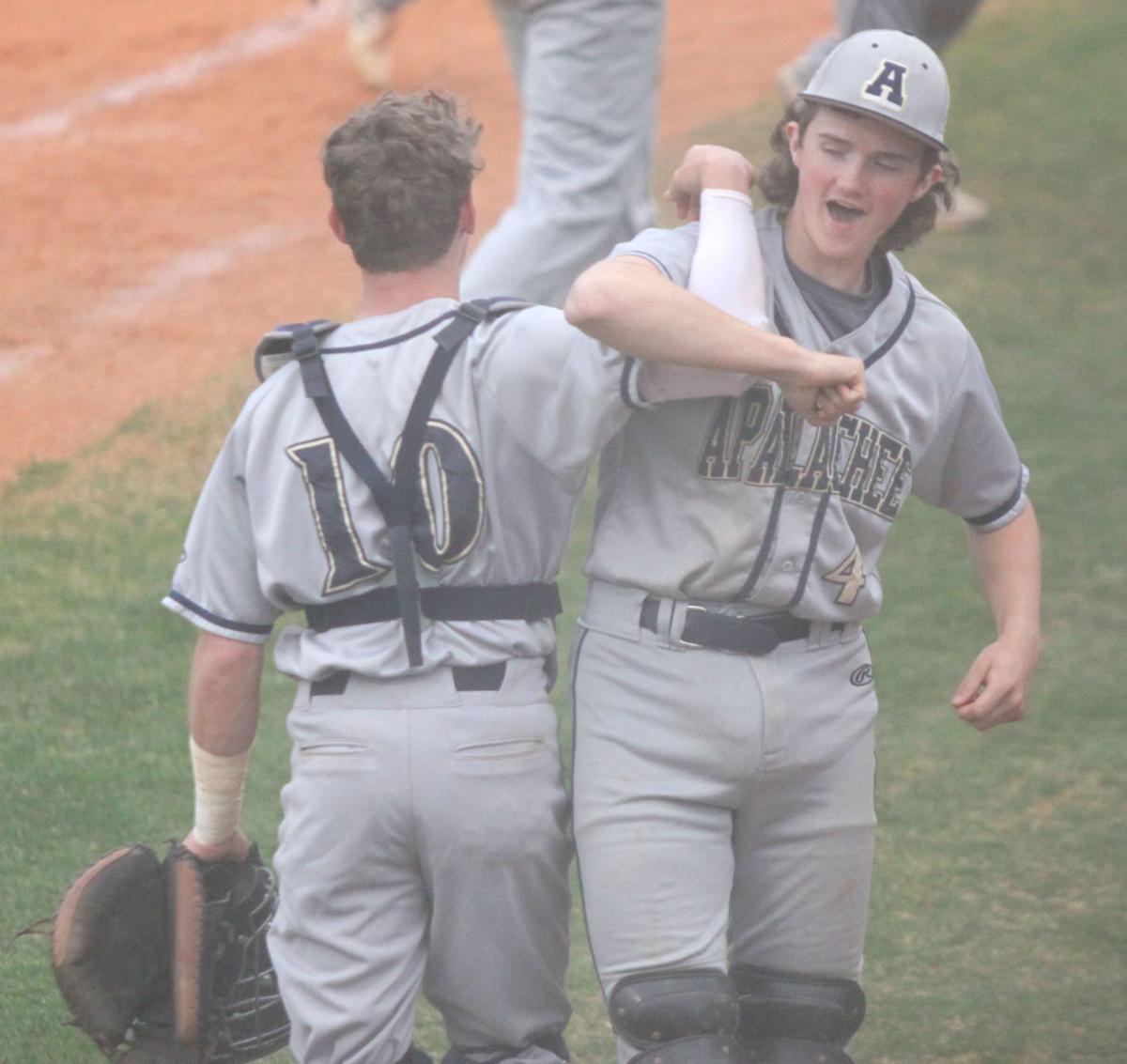 Apalachee catcher Traver Park (10) celebrates with teammates after throwing a would-be base stealer out at second to end the fifth inning Monday.

Apalachee's Judah Powell stays safely on second base after an RBI double in the third inning of Monday's GHSA Region 8-AAAAA game at Jackson County. The Wildcats lost 3-2.

Manning West delivers a pitch for Apalachee during Monday's game.

Apalachee third baseman Ashton Sapp tries to throw a runner out at first during Monday's game.

Apalachee catcher Traver Park (10) celebrates with teammates after throwing a would-be base stealer out at second to end the fifth inning Monday.

Good baseball teams, particularly ones that are playing well, have a tendency to make other teams pay for their mistakes, and that was the case for a red-hot Jackson County squad against Apalachee on Monday, March 15.

The Panthers took advantage of an uncharacteristically wild second inning by Apalachee ace Manning West, and Phillip Glander’s three-run double proved to be the difference in a 3-2 home victory over the Wildcats in both teams’ GHSA Region 8-AAAAA opener. The Panthers notched their 10th consecutive victory behind a solid, complete-game performance from senior right-hander Kedric Zimmer to improve to 12-3 overall, while the Wildcats dropped their second straight outing to fall to 8-5.

Apalachee jumped out to a quick 1-0 lead in the top of the first on an Ethan Middlebrooks RBI double, but Zimmer was able to avoid further damage and worked around a leadoff single and stolen base in the second to keep it a one-run game.

The Panthers made their move in the second when West walked Nicholas Streuer and Bradley Pruiett to open the frame and then hit Ayden Griswold to load the bases with nobody out. Glander then made the Oklahoma State commit pay on an 0-2 hanger, ripping it down the left-field line for a bases-clearing double that put the Panthers on top for good, 3-1.

“You can’t walk guys, especially coming out of having a scoring opportunity like we had,” Apalachee coach Allan Bailey said following the loss. “We had the momentum, and then we gave it back to them. They’re a good team, and you can’t give good teams outs and baserunners because you have to work harder, and one mistake can turn into three runs.”

The Wildcats got one of the runs back in the third on back-to-back one-out doubles by West and Judah Powell, but Zimmer got a groundout and pop out to end the inning, starting a string of nine straight Apalachee hitters set down. The Wildcats put the tying run aboard in the sixth on a one-out single by Middlebrooks, but he was cut down trying to steal second base by Pruiett, and Zimmer retired the final four men he faced to put the game on ice.

Despite the shaky start and a handful of hard-hit balls throughout the evening, Zimmer was efficient, throwing 57 of his 86 pitches for strikes and not walking or hitting a batter. The Saint Peter’s University commit allowed the two earned runs on seven hits and struck out four, while the Panthers’ defense played a clean, error-free game.

For his part, West also finished strong, allowing the three runs on three hits with three walks over six innings of work and striking out eight.

“We hit the ball hard; we just didn’t get rewarded for it tonight,” Bailey said. “Those seven hits could have easily been 10, 12 or more, and that’s what you like to see — balls being hit hard and really coming off the barrels. The defense played clean, good enough to win. We’ve just got to clean things up a little bit. We lost the ‘freebie war’ tonight, and any time you give freebies and runs away, it’s hard to win.

“They’re a good, scrappy bunch, and we’ve just got to keep moving forward and find a way to rebound because it doesn’t get any easier in this region. We’ve got to find a way to have a short memory and come back ready to go.”

The Wildcats were scheduled to wrap up their two-game series with the Panthers on Wednesday, March 17, at Apalachee. But, with rain in the forecast, it was likely that game would have to be made up in early April. The Wildcats will open up a two-game region series against Walnut Grove at home Friday, March 19.

Bailey knows that his team, which is starting four freshmen, will have to adjust quickly as it navigates a 14-game schedule against one of the deepest regions in the state with several playoff-caliber teams.

“We’re young and in experienced, but at the end of the day that’s no excuse,” he said. “We’ve got to be better all-around, execute and control what we can control.”